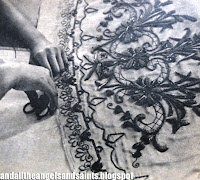 The art of decoration by means of needle and thread is an ancient one. But what remained most fascinating is the needlework done in genuine gold.

Elaborate embroideries of fine floral pattern generally adorn the vestments of religious sttaues gracing the altars and the affluent homes of today. The glitter of gold somehow never fails to catch the attemtion of the human eye because of its richness. The leaves and the flowers  as a continuous sheet of burnished metal.

Such an observation calls for a closer scrutiny leading to the discovery that gold threads and lintejuelas are used artistically for decorative purposes.

Gold threads passed and sewn at intervals vary considerably in structure and quality. A closer look that they are made by winding a high-carat gold around some silk thread. Mrs. Soledad Vicente from the shop of Maximo Vicente announced that she uses only threads imported from France. This, in some ways, accounts for the forbidding cost of ordering a santo for private use or for the church.

Furthermore, the gold leafing process used, for instance, on the Our Lady of Guadalupe in Pagsanjan makes it all the more expensive but pious individuals who are devotees of the of the Blessed Mother do not exactly mind the cost. 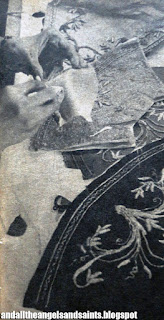 Some four sewers expertly-trained in the artwork on the embroidery of one assignment for months. Different kinds of stitches are tried after the silk or velvet foundation material has been stretched and temporarily sewn to an embroidery frame.

Designs are patterned after  that of antiques. Enterprising sewers try out original floral patterns. In some cases, the gold embroidery is lifted from centuries-old santos and transferred elsewhere because the original foundation materials fails to survive the onslaught of time.

Embroidering in gold used to be an uncontested preoccupation of nuns in convents. Gradually, lay families took to the trade. To date the tallere de Maximo Vicente which was established in 1908, has tuned out a good number of religious images found in parishes all over the archipelago.

Its most recently-completed commissioned jobs include the Our lady of the Rosary which has a height of one meter and sixty centimeters, including the base. It was finished in time for the fiesta of San Fernando, Pampanga. An even bigger finished work is the Our Lady of Guadalupe statue, roughly 2 meters in size with a diamond studded diadem for its crowning glory.The residents of Pagsanjan are proud of it.

284. TWO LADIES OF THE MOST HOLY ROSARY

The Virgin of the Holy Rosary is one of the most popular figures depicted in Philippine religious statuaries. The most well-known is of course, the Virgen del Rosario of La Naval, housed at  the Sto. Domingo Church, whose October feast day is marked with pomp and pageantry. These Virgins of the Holy Rosary are two of the lesser-known images found in the Philippines, but which nevertheless, inspire the same fervent devotion by the faithful in the local churches where they are enshrined. 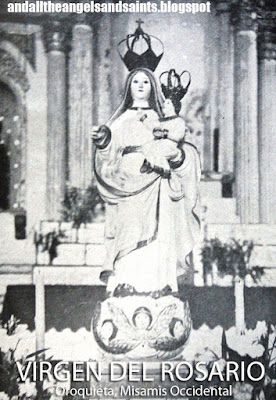 OUR LADY OF THE ROSARY, Oroquieta, Misamis Occidental
About 1870, this image of Virgen del Rosario was brought to Misamis by one Fray Roque Azcona, and enshrined it in its chapel until the present church was built in 1881. In 1883, when it was planned to replace this image with a more ornate one, a great storm arose lasting for weeks, changing the minds of the people. During the Moro uprisings in 1894 and 1901, this image was the object of the Mohammedans’ fury. Her shrine was put to flames but before it could do any appreciable damage, heavy rains fell, averting the infidels’ designs.

Our Lady is also remembered for saving the the townsfolk from an epidemic of cholera in 1881. After holding a procession in her honor, the plague suddenly ceased. Every year, on October 16, the people of Misamis observe sole,n novenas and holy Masses in honor of their Patroness who has shown Her desire to remain with them and has generously given Her heavenly aid, in their necessities. 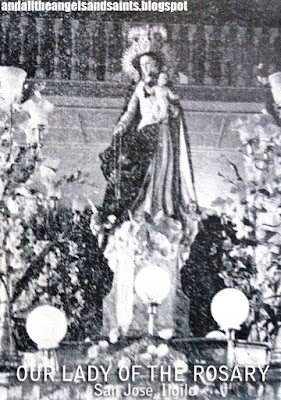 OUR LADY OF THE ROSARY, San Jose, Iloilo
This image of Our Lady of the Rosary was found in 1616 on the shores of Iloilo, not far from its fortress, while excavations were being made to prepare trenches for the defense of the City against an invading Dutch squadron under  the command of Admiral Spielberg, which attacked the island on 28 September 1616.

The discovery of this image so inspired the defenders under the leadership of Don Diego de Quiñones that they hurled back the invaders in the battle that ensued. Today, after surviving more than three centuries, this image is venerated in the parish church of San Jose, in Iloilo.Simple but beautiful, it shows our Lady with the Child Jesus in one hand and holding out a long silver Rosary in the other. She is depicted standing on a pillar of cloud with angels attending at her feet.

283. Marian Image: OUR LADY OF THE BARANGAY of the "Barangay sang Birhen" Movement

“Barangay Sang Birhen” was a lay Catholic movement that was started in Cadiz, Negros Oriental in 1949, by lay person Antonio Gaston with Henry del Castillo. In its first 10 years, it had become the country’s biggest Catholic mass organization, with aims  to preserve the integrity of the Filipino family, its spiritual unity, cultural distinction and and economic self-sufficiency. By 1959, it had over 2 million member families nationwide.

In the mid 1950s, movement leaders commissioned professional and amateur artists to paint a portrait of a Virgin that they hope would be the official image of their patroness.  None had succeeded in executing the portrait to the satisfaction of the leaders.

In 1955, Father Pixner, who ministered to the inmates of the Santa Barbara Leper Colony in Palawan, heard about the search, and presented the idea to Crisogono A. Domingo, a leper in his early 30s, whose only art background was as a laborer-helper to a house painter. He decided to take on the assignment, and, after praying 3 Hail Marys, began painting on a blank canvass.

The finished painting showed the Mother and Child overlooking a village with groups of five houses near the seas. The artist had painted from memory a portion of the shoreline of his native Davao Gulf.  The faces of the Mother and Child were foreign, but the Lady wore the balintawak, a Philippine native dress.

At the foot of the Lady is a rock upon which the initials BV (Barangay of the Virgin) is engraved. The houses—in groups of 5—show the primary unit of the Barangay. Five families (which correspond to the 5 mysteries of the rosary)  living in a barangay together may form a Barangay Group, headed by a cabeza. Three groups become a unit of 15 families, while three units compose a Parish Trinity, who report to the Barangay Center headed by the parish priest and an organizational body of leaders.

When the painting was brought to Msgr. Emmanuel Yap of the Negros archdiocese,  the scholarly archbishop made a hurried research whether the glowing crowns over the heads of the Mother and Child were faithful to the tenets of the church. They were. He acclaimed it to be a work of art, worthy to be venerated as the image of the Barangay patroness. Thus was born the image of “Our Lady of Barangay” that we know today.

On January 14, 1981, the original painting was brought back to Bacolod City for the  visit of the Holy Father where the image of the Birhen Sa Barangay was personally blessed by His Holiness, Pope John Paul II.


Since then, image in the painting has been replicated as sculpted 3-dimensional santo figures, some carved in the round, others to be dressed in the trademark balintawak dress. A shrine “Simbahan Lingin” is dedicated to Our Lady of Barangay in Tagbilaran City, Bohol.
Posted by Alex D.R. Castro at 2:22 PM 2 comments: