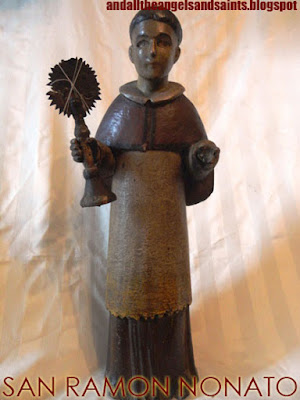 The fairly-popular saint, San Ramon Nonato, was delivered by ceasarian section in 1204, as his mother died during childbirth. Thus, his last name –non natus—not born. Due to the nature of his birth, he is invoked for safe childbirth by mothers and midwives. The saint joined the Mercedarian order in Barcelona, under San Pedro Nolasco, whom he succeeded. 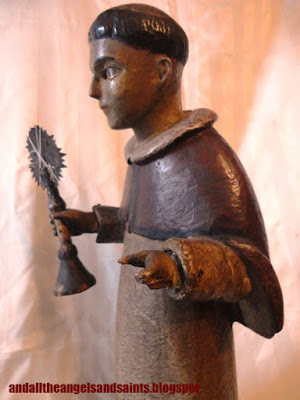 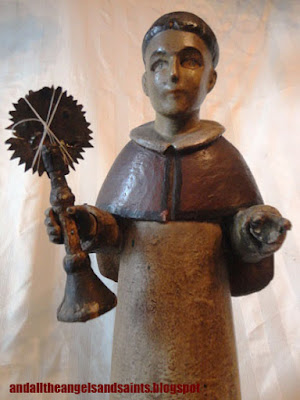 San Ramon went to Algeria to ransom slaves, offering himself as hostage for their release. While there, he converted several Mohammedans that caused his capture and torture. On his return to Spain in 1239, he was named Cardinal by Pope Gregory IX, but died on his way to Rome.

He is often depicted wearing a the habit of a Mercedarian, wearing a cardinal's red mozzetta. He is also shown  holding a monstrance and a palm symbolizing his martyrdom. 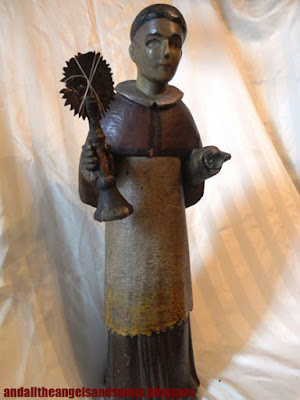 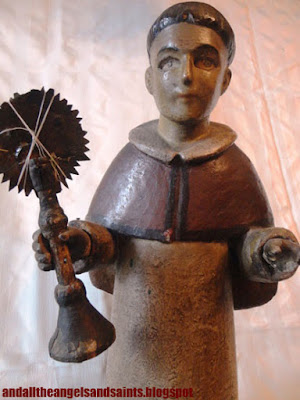 This chapel-size Philippine San Ramon Nonato, stands 18 inches tall (missing a base). It shows the saint wearing the red short cape of a cardinal. He is outfitted with glass eyes. He retains his original monstrance made of tin on his right hand. The santo, with its original paint,  was purchased from Cristobal Antiques at the Mabini Art Center in the 1980s. 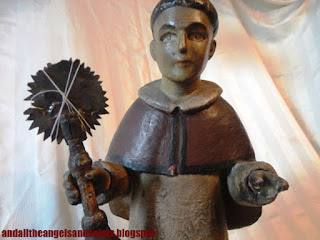 In Latin American art, he is shown with a padlock on his lips. This is in one reference to a legend that  San Ramon continued to preach the Christian faith while imprisoned, so his lips were sealed by his jailors  who bored a hole through saint's lips with a hot iron, and attached a padlock to silence him. Because of this, he is also invoked against false accusations, lies, gossip, slander, ill talk and secrecy of confessions. 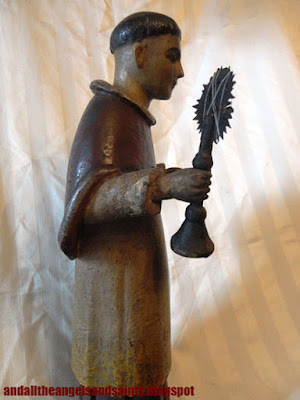 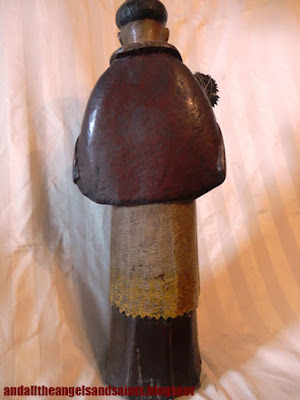 There are several parishes in the Philippines under the patronage of San Ramon Nonato, including the parish of Su-ay in Negros Occidental and in Sorsogon City. There is also a shrine dedicated to him in Tagas, Daraga. Albay.  Feast day: August 31.

318. Against Lightning and Fire: STA. BARBARA

One of the 14 Auxiliary Saints, the Greek martyr-saint Sta. Barbara, is not so well-known in the Philippines. Barbara was renowned for her beauty which prompted her ich pagan father to lock her up in a tower to shield her from the world.

She became a Christian and spurned the men that her father presented to her for marriage. Her father attempted to kill her, but Barbara escaped—a hill opened up and hid her. 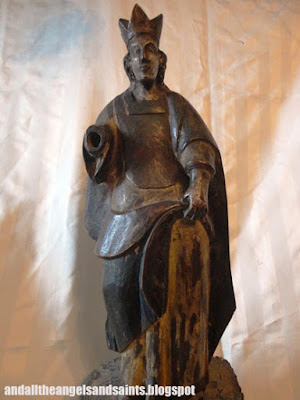 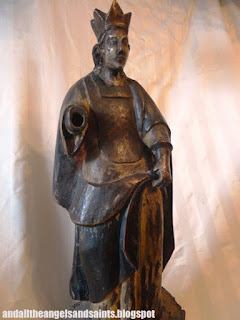 The history of St. Barbara was removed from the General Roman Calendar, but not from the Catholic Church's list of saints. Her relics rest at the St. Vladimir cathedral in Kiev. 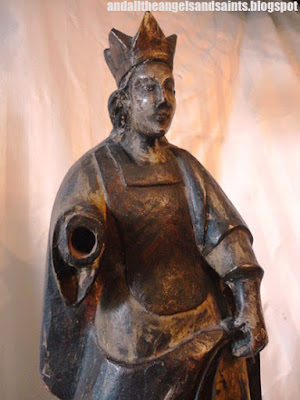 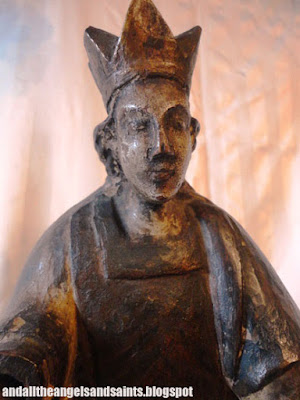 Her iconography includes her chained, standing by or holding a tower with three windows, carrying a palm branch, and sometimes with cannons. She is the patron saint of armourers, artillerymen, architects, mathematicians, miners and the Italian Navy. Sta. Barbara is invoked against lightning and fire. Feast day: December 4. 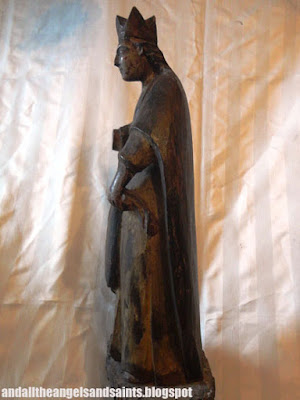 This rare depiction of the saint is done in baticuling wood. She is shown wearing a crown (of martyrdom), and dressed in robes notable for its folds. It stands 21 inches tall, inclusive of its mortar-shaped base. 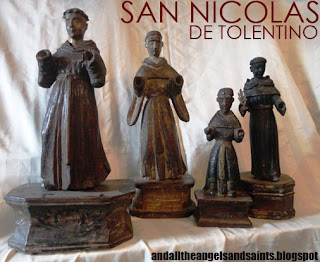 The visionary and wonder worker San Nicolas de Tolentino (b. c. 1246/d. 10 Sep. 1305, canonized in 1446) played such an important part in the religious history of the Philippines.  The mission province of the Augustinian congregation was created in Madrid in November 1621.  When the last wave of missionaries arrived in the country in 1606—the Augustinian Recollects ---they also named their “provincia” after the good saint. The ‘Recoletos’ ministered in the uncharted regions of Zambales and Upper Pampanga 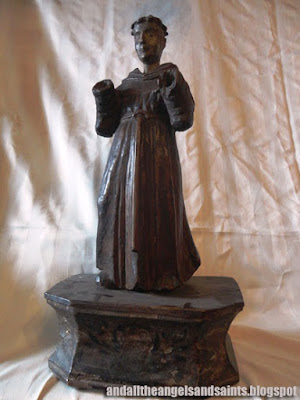 SAN NICOLAS 1. Height: 18"
Originally thought to be a San Antonio, this heft santo wears the trademark Augustinian cincture, which certainly identifies it as San Nicolas. The well-carved santo sits on an 8-sided ochovado base with traces of floral painting on the front panel. races of gilding on the hems and edges of the santo's habit. 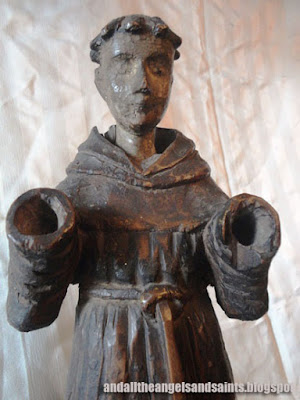 For some two hundred years, the Philippines was a primary “misión viva” of the province, which made possible the opening of seminaries in the country. By the nineteenth century, the Recollects gained greater socio-religious significance in the country, and the conversion and evangelization of Negros was the zenith of their achievements.

It is no wonder that so many San Nicolas images were made in the country, thousands carved by untrained Filipino artisans, to be enshrined on humble home altars for veneration and adoration. Four different San Nicolas antique carvings from my collection are shown on this page, to illustrate the varied styles and visual interpretations of Filipino santeros of long ago. 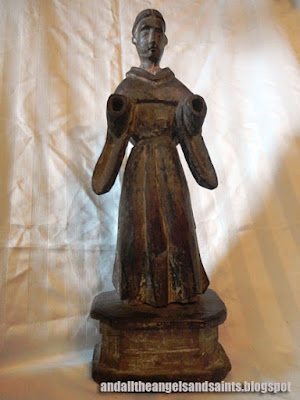 SAN NICOLAS 2: Height: 17 1/2"
A very folksy santo with not much carving details. But the charm lies in its folksy character. Nonetheless, the overextended sleeves of the Augustinian habit are accurately captured in this santo. 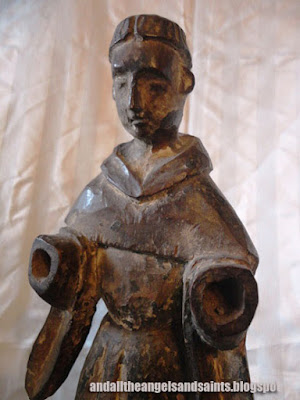 His life story struck a chord with Filipinos who prayed for him to work miracles—in the same way that the vegetarian saint, who, upon being served a roasted partridge on a plate, brought the bird back to life by making the sign of the cross. This gave rise to his popular iconography that shed on the rim, shows him in his black Augustinian habit, holding a plate with a bird perched on the rim, and a cross in his other hand. 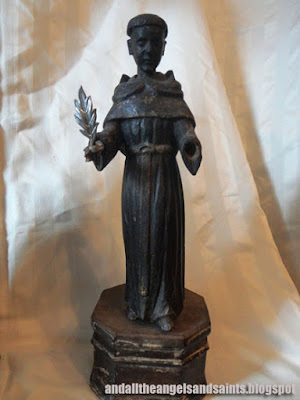 SAN NICOLAS 3, Height: 14"
This slimmed-down version of San Nicolas is handsomely carved and stands on an ochivado base. He has a downcast gaze, and his rigid pose is broken by his one foot that steps forward, Traces of gilt, including the outline of a star on his chest, which is one of his attribute--in reference to the guiding star that led him to Tolentino. 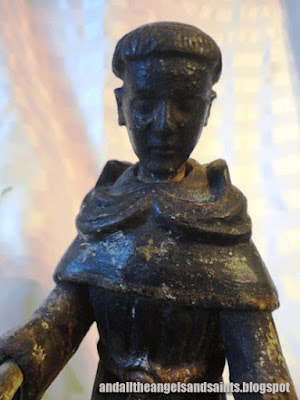 The ‘saniculas” cookie tradition that remains to be popular in Pampanga can be traced to an episode in the saint’s life when San Nicolas became emaciated after a long fast. The Virgin Mary and San Agustin came to him in a vision, and they told him to eat a cross-marked bread. He did so and he recovered. He then distributed these ‘St. Nicholas’ bread among the sick, who were miraculously cured of their illness. Instead of crosses, the ‘saniculas’ is imprinted with the figure of the saint.

In Banton, Romblon, a church built in the 16th century is dedicated to him, and his feast day during the annual Biniray festival. In Pampanga, a 440-year-old Augustinian church, was founded in his honor in 1575. The massive, heritage church houses a second-class relic of San Nicolas that is venerated after the Tuesday mass. 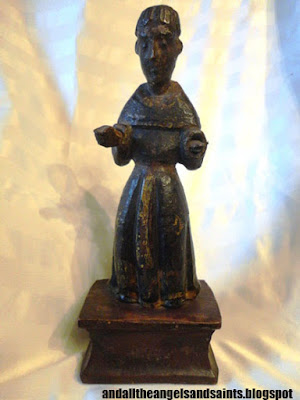 SAN NICOLAS 4: Height: 11"
This is the smallest among the Santos Nicolas in my possession, and also one of my first santos. This small folk santo has a long, narrow head that sits on a small, short body. It bears traces of paint, and is remarkably complete, save for a missing hand and a plate. Bought in Baguio in the early 80s, it comes from Ilocos. 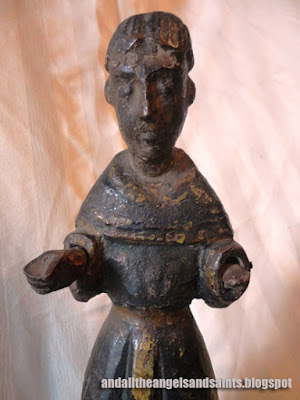 A San Nicolas de Tolentino Parish Church, built in 1584, can also be found in Cebu City, one of the oldest in the country. San Nicolas is also recognized as the titular patron of the cathedral of Cabanatuan in Nueva Ecija—the site of Gen. Antonio Luna’s assassination. He is also the ‘pintakasi’ of Lambunao and Guimbal (Iloilo), Surigao City, Capas (Tarlac), Buli and Cupang (Muntinlupa), San Nicolas (Ilocos Norte) and La Huerta (Parañaque). 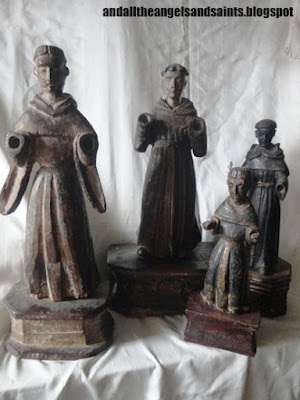 His patronage also extends to animals and babies, mariners, sailors and watermen (he saved 9 passengers on a ship that was about to go down), dying people and  holy souls.