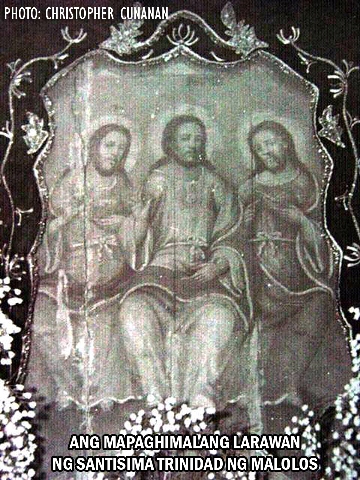 The visita itself was built on 4 May 1863. Stories have it that when the field was being cleared by workers for the erection of the visita, they unearthed an icon bearing the image of the Holy Trinity, painted on 4 wood panels pieces. The 26 x 36” painting shows the 3 divinities—God the Son, God the Father, and God, the Holy Spirit seated together, with hands raised in benediction. As a tribute to the Trinity, the chapel and th barrio was put under their titular patronage.


But it is the original “larawan” that remained in the altar mayor for as long as one can remember, around which the people of the barangay anchored their faith, love and devotion. In time, the chapel was shared with two other barangays, Barihan and Pinagbakahan.

Over the years, miracles have been attributed by residents to the workings of the Santa Trinidad—impossible favors granted,  incurable afflictions healed, and babies safely delivered despite delicate pregnancies. The 3 barangays celebrate the fiesta of their revered patron annually, every Trinity Sunday, while in separate feast in October is celebrated for their secondary patron, Birhen ng Santo Rosario.

In 1981, the year when the old chapel was scheduled for demolition to give way to a new, more expansive building, a most unfortunate event happened. On October 27, the original Santisima Trinidad was stolen from the central niche of the altar. All efforts were exerted to find the lost icon and the criminals who committed this dastardly act—to no avail.

When all hopes seemed lost, a generous family from Olongapo—the Bartletts—donated 3 vintage 1950s dressed mannikin images (de vestir) to the chapel of the much-saddend barangays. From Olongapo, the images were taken to Malolos and translated to Brgy. Santisima Trinidad by procession. Somehow, the pain of the loss was alleviated by the arrival of these images that now occupy the main altar.

As if to show its divine displeasure, the Santisima Trinidad Chapel was embroiled in controversies, beginning in 2001 when it was interdicted by the Diocese of Malolos. A different sect took over the chapel from 2002 to August 16, all caused by land ownership discord and the refusal of the barrio to turn their chapel into a parish church. It was only on 27 October 2016—exactly 15 years since the disappearance of the “larawan”—that the chapel returned to the fold of the Diocese of Malolos, where Catholic masses have now resumed.

With this positive and happy turn of events, the people of 3 barangays have become more of hopeful for the safe recovery and return of their patron, Santisima Trinidad. The community of santo aficionados (and that includes camareros, private collectors, antique shop owners and their middlemen, santo carvers and artisans, auction houses, religious stores, priests and church groups, heritage and cultural advocates) are enjoined to be vigilant and to be on the look-out for this image. Like the Blessed Trinity, there is strength in numbers, and together--even after 36 years-- we are confident we can make a miracle happen.

CREDITS:
MANY THANKS TO MR. CHRISTOPHER CUNANAN, for the information and all pictures used in this article, and for calling my attention to this lost icon.
Posted by Alex D.R. Castro at 5:27 PM No comments:

The oldest school-based museum in the Philippines--the University of Santo Tomas Museum of Arts and Sciences—is home to some of the finest collection of santos and other religious arts in the country. Founded in 1871 by Ramon Martinez, O.P., a professor of natural history, the museum showcases both scientific and artistic collections, including sacred objets d’art like religious imags, icons and paintings—a selection of which are featured below.