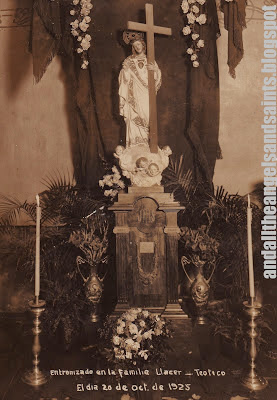 ENTHRONEMENT OF CHRIST THE REDEEMER OF THE LLACER-TEOTICO FAMILY, 20 October 1925.

A rarely-seen representation of Christ the Redeemer (Cristo Redentor) in a standing position, holding a cross, owned by the Llacer-Teotico family. It is possible that the Teotico side of the family is related to the acclaimed multi-awarded sculptor from Sta. Cruz, Manila, Domingo Teotico. He had a religious statuary shop along Palma St. in Quiapo. 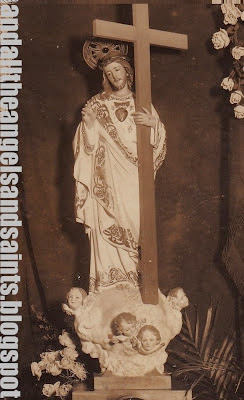 Christ the Redeemer is carved in the round, and stands on a magnificent cloud base adorned with 4 cherubs. The plain cross he holds in His left hand stands out from the classically-carved image dressed in white robes wth decorative gilding on the edges. The other hand is raised in benediction. Normally, the exposed heart is not part of the iconography of Christ the Redeemer, but the sculptor probably took creative license and carved the sacred heart in relief.The most iconic image of Christ as the redeemer of the world is the giant marble statue in Brazil, which today is recognized as one of the world's seven wonders. 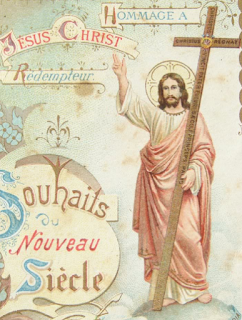 Christ is the world’s Redeemer,
The lover of the pure,
The font of heavenly wisdom,
Our trust and hope secure,
The armor of his soldiers
The Lord of earth and sky,
Our health while we are living,
Our life when we shall die. 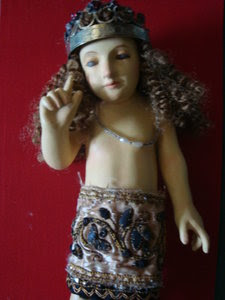 Before a Filipino santo online dealer fell from the good graces of ebay (he failed to honor legitimate winning bids of buyers, myself included, resulting in 18 negative feedbacks in one month), I was able to get this antique, 8-inch Niño of heavy wood—bald, with peeling paint and glass eyes blackened with age, making him appear pupil-less and eerily blind. The Child Jesus, in a semi-standing position with legs slightly bent at the knees, has his right hand raised in blessing. This arm was threatening to separate from the rest of his body, but other than that, all parts were intact, including his fingers. 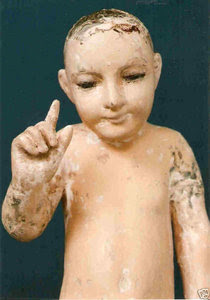 At first, I thought this must have been detached from either a Virgin Mary or a St. Anthony figure—except that the position of the legs, which are almost upright, does not indicate that he was seated. The back showed no hole from where a peg is often placed to secure it to the main image; instead, the Niño’s bottom has a small hole where a peg could be inserted to make Him stand. In fact, it came to me mounted this way. 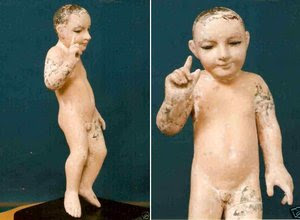 I have seen standing Niños atop the book held by San Antonio, but this image is too heavy to be put in such a precarious position. It could not also be a Dormido--a sleeping Jesus-- for its eyes are wide open. I could only surmise that this is a small Salvador del Mundo in a lying down position. Besides, the soles of the feet were not carved flat, so he could not have possibly stood on a peaña; the hole in his bottom could have been used to hold him upright during the painting process. 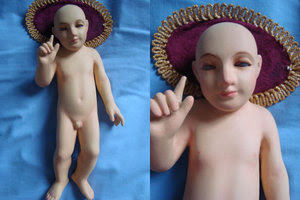 Done with my conjectures, I brought the Niño to Nick Lugue as a ‘finish-when-you-can-minor project’ alongside my more important commissions. It took awhile to have the small image repaired and repainted, but I was in no real rush, as I haven’t figured out what to do with it. 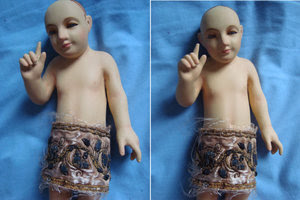 In the meanwhile, I found an embroidered strip of cloth from an old Dominican santo vestment, so I saved that for the Niño as I thought it would make a perfect tapiz. Putting my limited sewing skills to use, I managed to make the strip into a decent wrap-around for the Niño. Then it went into storage in a cardboard box for a months, as I was kept busy with my Mother’s lingering illness. 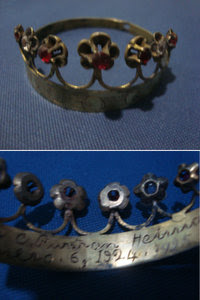 A week ago, I decided to skip lunch and check out Manila’s antique shops. Antique-hunting has a way of lifting me out of my depression, even if the effect is just temporary. It was at Padre Faura, at the shop of Floy Quintos, that I found this small, antique tiara encrusted with paste jewels, and engraved with the name of its previous owner, “Maria Purtran Hermana, Enero 6, 1924-1925”. I thought of my Niño, momentarily forgotten in a cardboard box stowed inside my book cabinet. I bought the tiara, vowing to complete my Niño project this weekend.

Saturday afternoon, I took out the Niño and started putting things together, outfitting it with a wig, a leftover from another project, and a necklace made from tiny old beads. The antique tiara was a bit big for his head, but a slight adjustment solved the problem. This was the result: 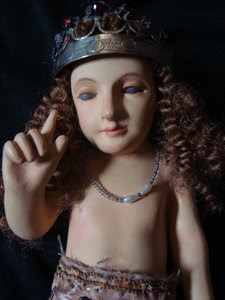 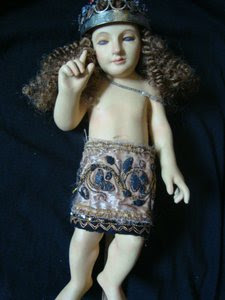 The last step was finding the right size urna for my restored Salvador del Mundo—or whatever Child was this-- and thank God, I had one in stock. You’ll never know when you need one. 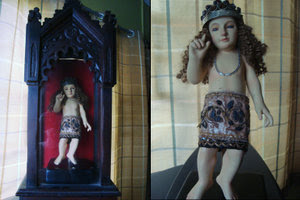 So, there. Maybe I’ll put mother-of-pearl flowers when I find some, but in the meanwhile, you can consider this project successfully done and finished!