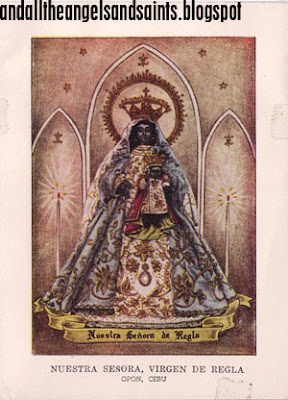 In the parish of Opon (now Lapu-Lapu City) , Cebu resides the venerated image of the Virgin bearing the title, Ntra. Sñra Virgen de la Regla (Our Lady of the Rule). This devotion started with St. Augustine, who hand-carved a statue of Mary that was brought to Spain upon the destruction of the city of Hippo. Here, the image wrought miracles and was reputed to have prevented the pillage of the country by the Moors.

The location of the image was lost, however, until an Augustinian monk went to Cadiz upon instruction from the Virgin who appeared to him in a dream in 1330. He found the image in an underground part of the cave. The devotion soon spread to Spanish colonies and in the 18th century, the Augustinians introduced Filipinos to Our Lady of the Rule. 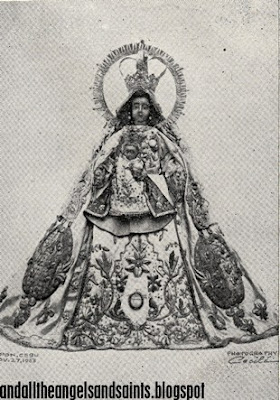 In 1735, the parish priest of Opon, P. Francisco Avalle showed the people a picture of the Virgin, which was received favorably. An image was soon carved from the trunk of a Philippine hardwood, giving the icon a swarthy complexion. Our Lady was enshrined in the main altar of the Church of Ntra. Sñra Virgen de la Regla which was under the ministry of the Augustinians from 1730-1929, to be replaced by the Dutch immediately after.

Also in the church is a cloth relic of the Blessed Virgin, given in 1909 by the Apostolic Nuncio to the Philippines, P. Ambrosio Agius. Reports of miracles attributed to the Virgin abound—from the healing of a barren and paralytic women to cures of abdominal and blood disorders, as in the case of Lauron Cruz who was instantly healed of his blood disease upon lighting candles before the image in 1735.

The image of Ntra. Sñra Virgen de la Regla was canonically crowned on 27 November 1954 during the First Marian Congress. 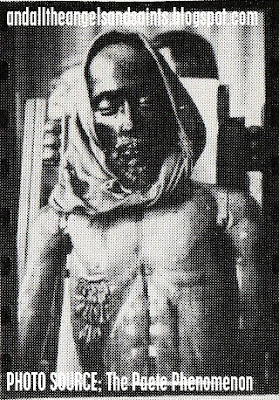 According to town historians, the Catholic image of the dead Christ is the oldest, most miraculous and the most important of all images. It is said to have come from Mexico and the oldest-known saint in the stone church of Paete. 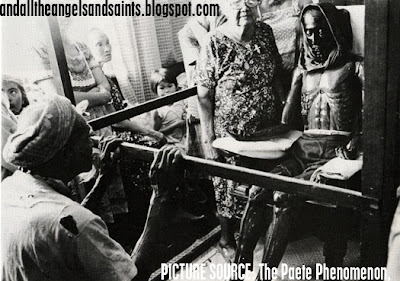 Before Lent, it is blessed with incense and daily and nightly prayers are offered. It is bathed with wine and the liquid is kept in small bottles to be distributed to devotees. The used wine becomes sacred and is believed to be a good cure for any ailment. 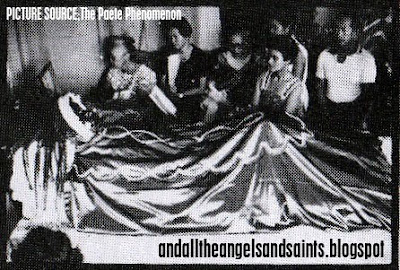 The Jesus Christ figure also receives the biggest amount of donation from devotees from all over the land. Donations are in the form of blankets, silk clothing and pillows. Excess donations are given to the church to be used as altar mantles or clothes for sacristans. The clothes and pillows are often borrowed for use of sick persons or those afflicted with grave ailments. 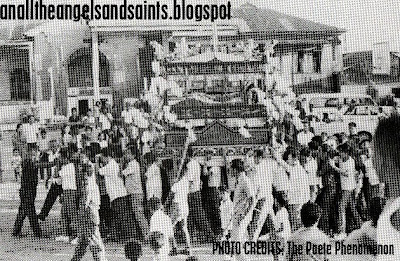 While the vigil for the dead Christ is in progress in te house of the recamadero (the keeper of the image), Catholics and even Aglipay take turns in kissing the hands and feet of the image. Men with devotion or personal pledges go on shifts in carrying the image in the procession. The feel the weight on their shoulders if their sins against God and their fellowmen are grave. It is said to be lighter when volunteers do it in gratitude for past blessings. Newly circumcised boys serve as support group with the wooden poles which they used to steady the float during the procession. After the Good Friday rites, everyone is invited to the house of the recamadero for a yummy bowl of sotanghon ( a variety of noodle) and hot biringhi dipped in refined sugar.

72. Find of the Year: A SAN PIO QUINTO IVORY SANTO 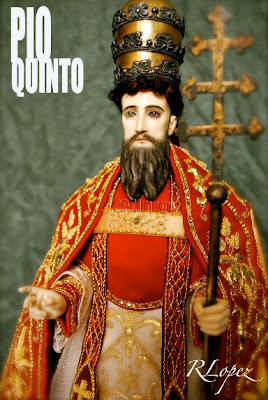 “Expect the unexpected” was once our ad agency’s creative credo, and it also rings true when it comes to finding sacred treasures such as this one. En route to the Main Avenue office, I had texted my dealer earlier to say that I was dropping by to pay for my purchases worth Php400. He was kind enough to open his office for me on a weekend (it was a Sunday) and then casually told me that he had a santo that I might be interested in. In his absence, he instructed a househelp to bring out the image for my perusal. 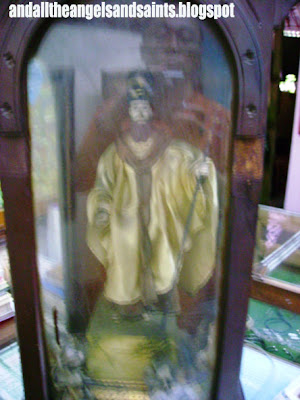 As soon as I entered the shop, I saw this dirty gothic urna that was threatening to fall apart. Through the dusty glass, I could still make out the figure of a santo with a papal tiara, holding a 3 bar-staff, which I immediately identified as the papal saint, Pius V. It also didn’t take much to recognize that the head and hands of the image were of—gasp!-- precious ivory! 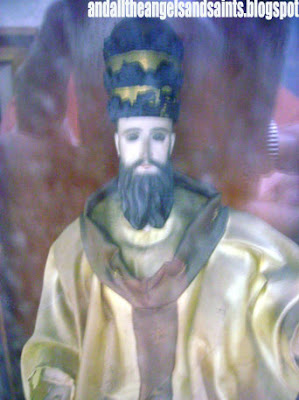 THE FIRST TIME EVER I SAW HIS FACE. The image, when I first saw it in its grimy, dusty state. The urna was collapsing and a bunch of plastic flowers lay crumbling at the image's base.

The image was decorated with tulle and plastic flowers that were crumbling with age. Tacked inside was this torn 1906 prayer card to honor the beatification of Tonkinese (Vietnamese) martyrs. 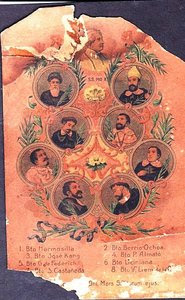 I paid for my book purchase, and then rang up the dealer to tell him nonchalantly that I had seen the santo and was not impressed (I am so good in feigning disinterest). I suppose, I told him, given the santo’s sorry state—it would be priced accordingly. But of course, he replied, and then proceeded to quote the price of the santo—inclusive of the urna. 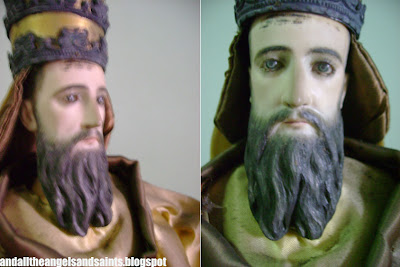 THROUGH A CLEAR GLASS, DARKLY. Peering through the front glass panel of the urna, the image of Pius V was clearly, unmistakably of ivory.

I nearly choked at the unbelievable bargain-basement-300-feet-below-sea-level -price. Why, it’s only 1/6 of the current market price for ivory santos of this quality. I just continued on with my best Oscar performance and gave him a ho-hum response. Round off the price, I said, and I will not only issue a Pay-to-Cash check now, but I will also rid your shop of this dusty, grimy santo with its shaky urna. He agreed! I hastily gave him a check, lugged the santo to the car and Pio was mine! 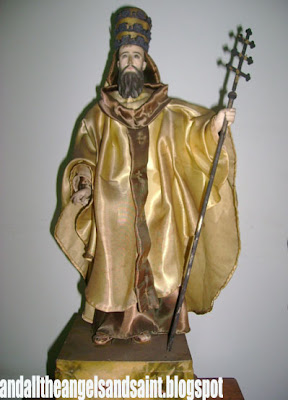 CLEAN AND PURE IN SPIRIT. The ivory image cleaned and re-dressed in its original satin vestments.

Back home, I quickly removed the santo from its case. It was still wearing its original hand-sewn satin vestments in yellow and green. It was even wearing an alb with lacey edgings that you can’t see. 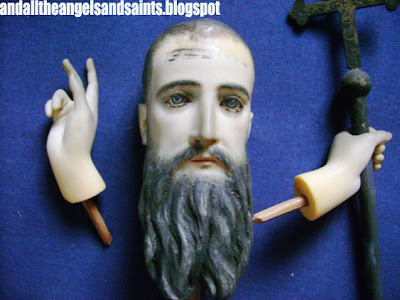 HEADS AND HANDS OF A SAINT. When removed for cleaning, the head turned out to be a solid piece of carved ivory. The finely carved ivory hands were attached to the manikin body with wooden pegs.
The ivory head and hands were in excellent condition. I was wondering about the hairless head. Did it have a flock of hair at some point? The wooden feet were painted to look like papal shoes, decorated in the intricate estofado style. The metal accessories were intact—from the staff to the tiara which was only missing a finial. A restorer dated this as a pre-War piece, possibly made by one of those commercial talyeres in Quiapo district. 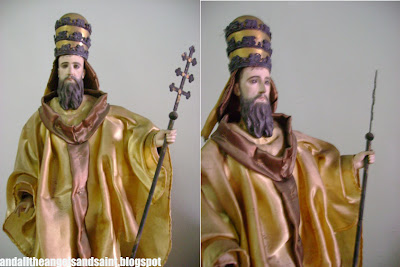 Two weeks after, off to santo restorer Dr. Raffy Lopez I, and my santo went. I wanted to save the original vestments but the professional santo restorer prevailed on me to discard them. Instead, for my tabletop image, he opted to get design and color inspirations from the vestments of the original Pio Quinto of Sto. Domingo. 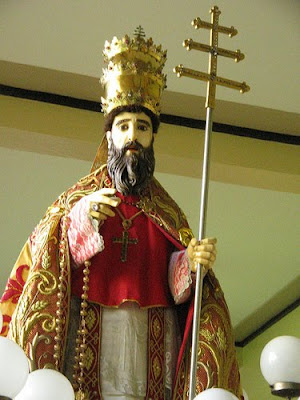 He even added a wig to the bald pope! After a month, these were the results: 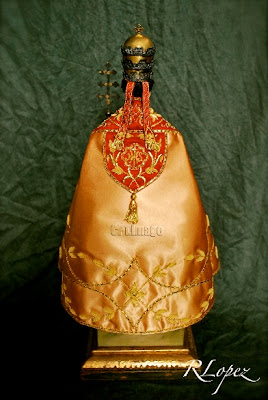 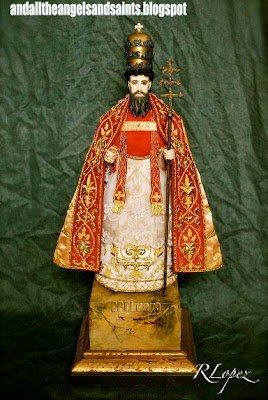 I have also repaired the urna by myself, stabilizing loose joints with glue and nails and replacing the lost moldings, thanks to my frame shop. And by the way—to rid myself of any guilt feelings--I have also told my dealer that the santo he sold me was of ivory. This was not the first time this happened. Two years ago, he sold me a painted San Roque that turned out to be ivory. For sure, he wouldn’t have let go of these images had he not made a reasonable profit. To him, it was a fair done deal. To me, it was my find of the year.