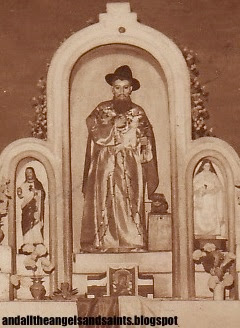 In a chapel in Baloc, in Brgy. Sto. Domingo, Nueva Ecija is enshrined a small image of the town patron, San Geronimo, Doctor of the Church (340-420). It was donated by the Nuñez Family in 1961. The carved figure depicts San Geronimo as a cardinal, in a red cardinal hat and cape, based on an erroneous legend from the Medieval age that the saint was a prince of the Church.

His most popular representation depicts him as a hermit in the dessert, where he stayed for four years. The legend then turns to the story of St. Jerome's pulling a thorn from a lion's paw. In gratitude the lion is said to have become a sort of lay brother in Jerome's monastery, doing chores for him.

The Baloc image shows the animal attributed to him by his side. Actually this story was transferred to him from the tradition of St. Gerasimus, but a lion is not an inappropriate symbol for so fearless a champion of the faith.

There is another image of San Geronimo in Sto. Domingo housed in the small chapel of the Iglesia Filipiniana Independiente, visited by both Catholics and IFI devotees during its September 30 feast day. His feast day is marked with lighting of red candles and a procession.
Posted by Alex D.R. Castro at 4:30 PM No comments: 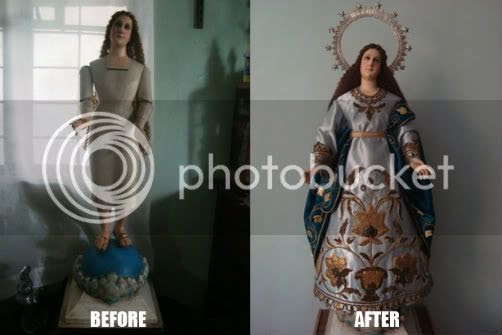 I wasn’t really looking for another old santo when a friend gave me the heads up on an Asuncion Virgin that was available from a seller in Malolos, Bulacan. But one look at the photos and I was taken by the amiable-looking face and expression of this 30 inch carved image, inclusive of its simple cloud base.

Never mind that I thought she looked a bit hefty and stocky for its size. I was told it was carved by a known-artist and dates from the 60s --new, by my standard—but at that point, those were immaterial to me, the quality of the facial carving was enough to convince me to check the image out at the soonest possible time.

Luckily, it was already a Wednesday, and since I was due to go home to Pampanga from Makati on Friday, I phoned the seller and scheduled a late afternoon appointment. When the day finally came, I was in Malolos  a little late for my appointment, delayed by the rain. I was fetched from Barasoain Church where I parked, by Jiggy, the seller, who lived just by the side of the church.

Soon as we got to their house, I immediately saw the Asuncion Virgin, which seemed even smaller than how I imagined it to be. It was naked, saved for a frazzled wig, but even then, it impressed me as a well-made and beautiful image—just like how she looked in the pictures. The family had recently lost their mother after a long illness and they were trying to recover by raising funds, hence, their decision to sell the image.

I made my offer, and Jiggy easily agreed without further negotiations. Into the car went the Asuncion and for months it stayed in my Pampanga home. Restoring it was not a priority, as there really was nothing to repair—all she needed I thought was a new dress. I think it was serendipity that  a few months before, I managed to buy an antique silver 12-star halo (missing one star)  from my platero which was a perfect size for my Virgin.
(Photo courtesy of Mr. Leo Cloma)

Since my house was running out of space, I decided to bring the Virgin to Dr. Raffy Lopez, with instructions “to dress it up only if you have time”.  His initial assessment was that the Asuncion had a short torso and short legs, and he planned—with my permission—to lengthen the torso by sawing off the body at the waist and augmenting it with half an inch of wood. I agreed, at first, then relented as I thought that would destroy the integrity of the image—and so the Asuncion remained with him, as is, for three long months.

On the 2nd week of October, Dr. Lopez told me that he was readying the design for the Asuncion’s vestments. He told me I still had leftover gold embroidery from another project, which he would recycle. As always, most of the design decision I left to the good doctor, although he would fill me in on his choice of fabrics and color scheme every now and then.

A month after, I got a picture message from Dr. Raffy that showed my completed Asuncion. It looked so radiant and beautiful in its new blue and old grey satin outfit.

The thistle embroidery salvaged from the vestment of a finished ivory santa project had been integrated into the simple, but elegant floral motif for the vestment’s front panel. A new wig and a repaired halo were the only other additions to the Asuncion Virgin.

From the bottom of the base to the tip of the halo, the Asuncion Virgin now stands 38 inches tall. I already have an urna for it and hopefully, it will participate in our future church events, but for now, risen and restored to its full glory, the Asuncion Virgin resides in a special spot in our old home. 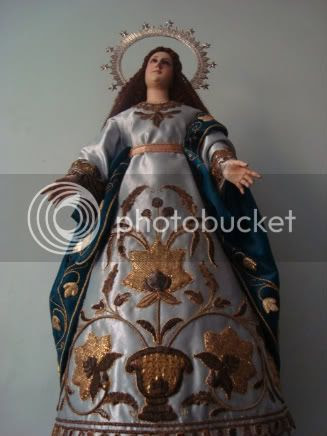 119. Santo Stories: THE FALL OF CHRIST 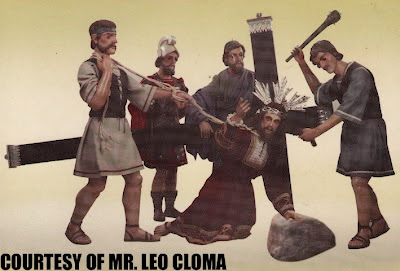 "Ang Pagkarapa ng Panginoon" represents the Third Fall of Christ while bearing the cross en route to Calvary. The tableau includes figures such as soldiers in the act of whipping and dragging Christ, with Simon Cyrene holding on to the Cross, in an act of supporting the fallen Jesus.

The santo figures were commissioned by the Veron-Dulay-Cloma Family, in the Parish of Santo Cristo (Caingin, San Rafael, Bulacan) on March 2007, from the workshop of Francisco Vecin of Makati. In memory of Felipa M. Veron-Dulay (16 May 1912/5 October 2004). 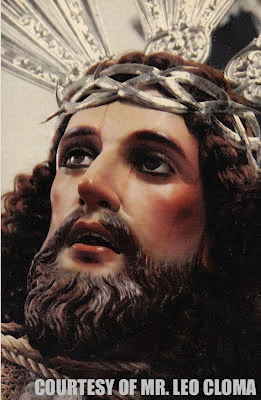 MEDITATION ON THE FALL OF OUR LORD

We adore you, O Christ, and we bless You, because by your Holy Cross, You have redeemed the World.
O Jesus, it was for our sins that You bore the heavy burden of the Cross and fell under its weight. May the thought  of your sufferings make us watchful over ourselves and save us from falling into sin.
O Christ, our repeated falls into sin have added the burden that you carried for our redemption. As you are weakened by the weight of our sins, we are the cause of your fall. Please give us the strength never to offend You again.
O Lord, we beg you, by the merits of your most painful fall, to pardon our frequent relapses and our long continuance in sin. May the thought of Your sufferings grieve us and move us to make frequent acts of love and reparation.