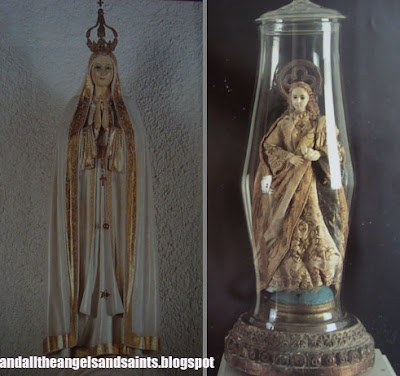 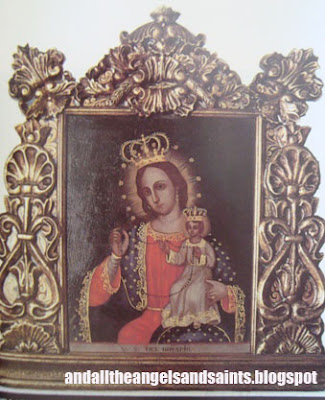 OUR LADY OF THE HOLY ROSARY, ANTIQUE PAINTING 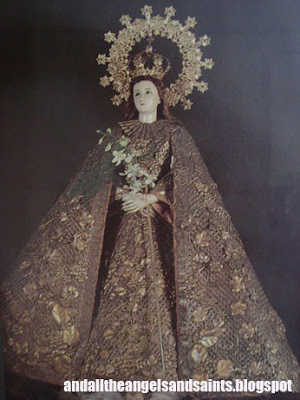 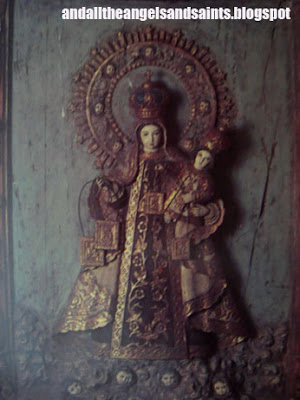 ANTIQUE BAS RELIEF OF OUR LADY OF CARMEL 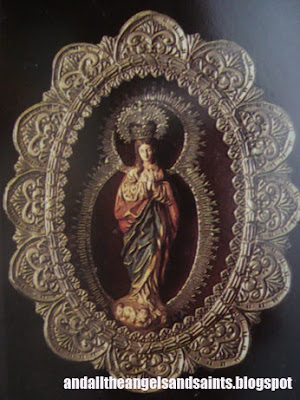 OUR LADY OF GUADALUPE 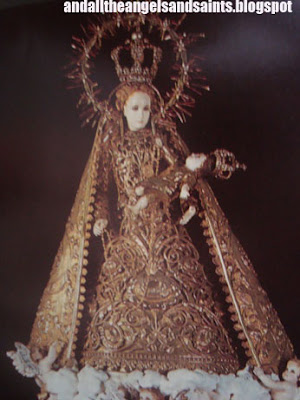 OUR LADY OF THE HOLY ROSARY, ANTIQUE IVORY 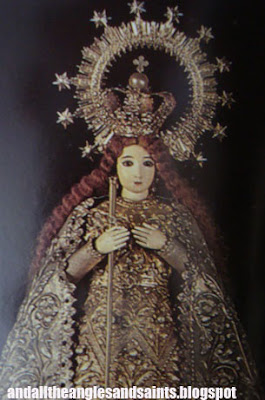 OUR LADY WITH A SCEPTER, OLD IVORY 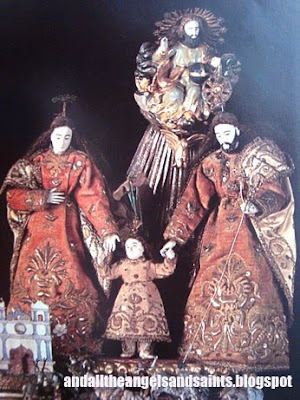 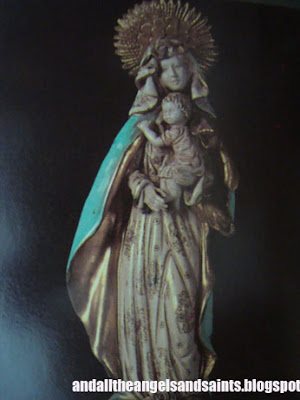 NEW IMAGE OF MOTHER AND CHILD IN IVORY 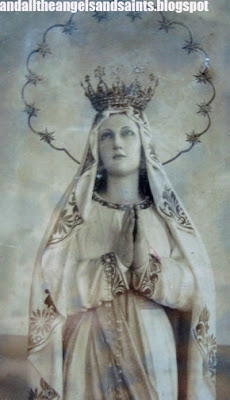 On 11 February 1858, Our Lady appeared to a farm girl named Bernadette Soubirous in Massabielle, Lourdes in France. The Virgin appeared to her dressed in white, with a blue sash and holding a rosary. This was to be the first of 1b apparitions. When asked by Bernadette to state her name on the prodding of a church authority, the Lady answered, “I am the Immaculate Conception”. Thus started a universal devotion to our Lady of Lourdes.

On 28 July 1858, the Bishop of Tarbes formed a commission to study the apparitions and after 3 years, the supernatural events were deemed genuine, that it was indeed the Blessed Virgin that Bernadette saw. A pastoral letter was circulated in 1862 that announced the findings. 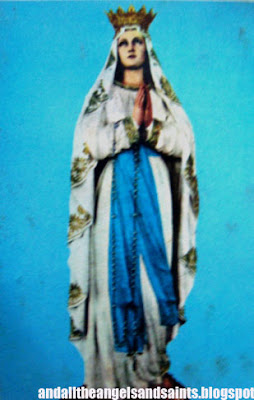 It was almost 25 years later that the Capuchin Fathers came to the Philippines to introduce the devotion. In 1886, Fr. Bernardo de Cieza, Superior General of the Capuchins, requested Filipino sculptor Manuel Flores to carve the statue of Our Lady. Assisting him was the Capuchin, Fr. Antonio de Valencia, whose father was a renown sculptor in Spain. The 1.5 meter image was carved in the round, painted and outfitted with a gilded aureola, a crown, and rosary. It was first publicly shown for veneration in 1892. The Capilla de Capuchinos was newly-finished in 1898 when the Philippine-American War began. The fathers promised to dedicate the church to Her if Manila was spared, and indeed, the city was left untouched by the siege. 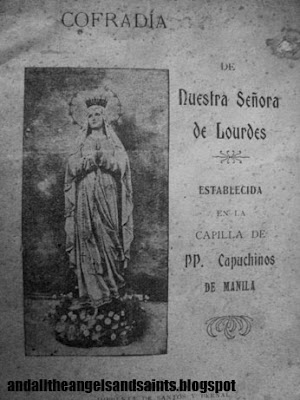 By the 1900s, the devotion was entrenched in the country, and a confraternity was organized under the counsel of the Capuchin superior. One important aim was to promote the definition of the 1854 dogma of Pius IX. 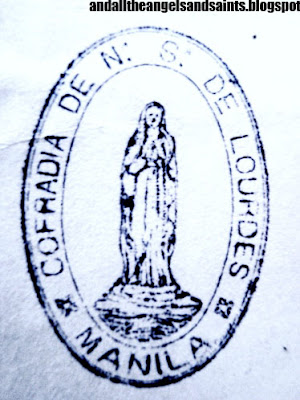 At the height of the War, the image was stowed for safekeeping at the San Agustin Church, Intramuros, the only church that remained standing after the bombing of Manila. In March 1945, the Lourdes Virgin was brought from the chapel of Santisimo Rosario of UST to the chapel of Sta. Teresita in Quezon City. It was finally installed in Lourdes Church on Retiro, Quezon City.

103.BURIED TREASURES, Along a Boulevard of Broken Dreams 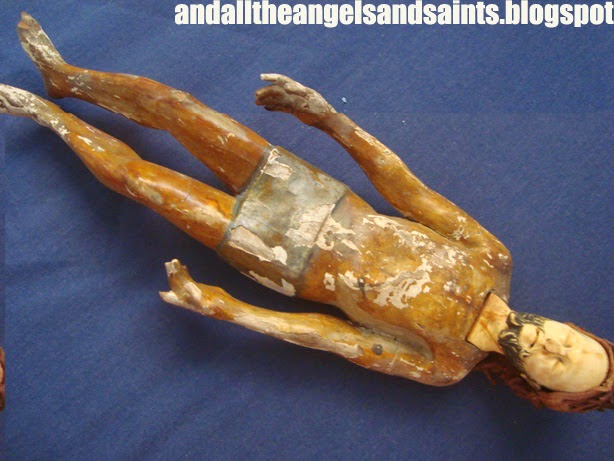 I've been told by a lot of collector-friends that Aurora Boulevard in Quezon City has a lot of junk shops and second-hand stores that hold hidden treasures of every sort--religious artifacts included. I am familiar with the the place as my first job was in an office located along this road lined with interesting shops, sights and buildings—like Arcega’s—where one could shop for the finest bicycles, and of course, the Magnolia Ice Cream Plant that housed the famous dairy bar. Further down was Broadway Centrum, then a spanking new commercial complex. 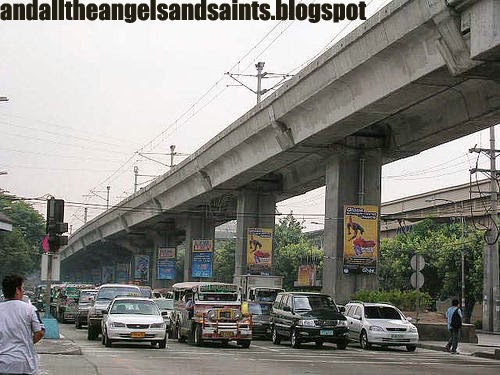 That was way back in the late 1980s, and I have not explored that side of the boulevard since. Well, this Sunday, I decided to set off for a return adventure to the famed boulevard after over 2 decades just to check those junkyards my tipsters have been raving about. 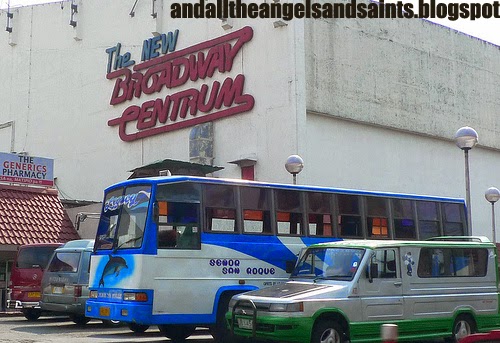 In fact, Aurora had become unrecognizable—so narrow, dirty and looking unsafe—and here I am walking the stretch of the boulevard under the hot early afternoon sun. The intersecting streets still rang with familiarity—there’s Seattle, Boston, Manga—but Betty Go-Belmonte St.? Now, where are the junk shops? 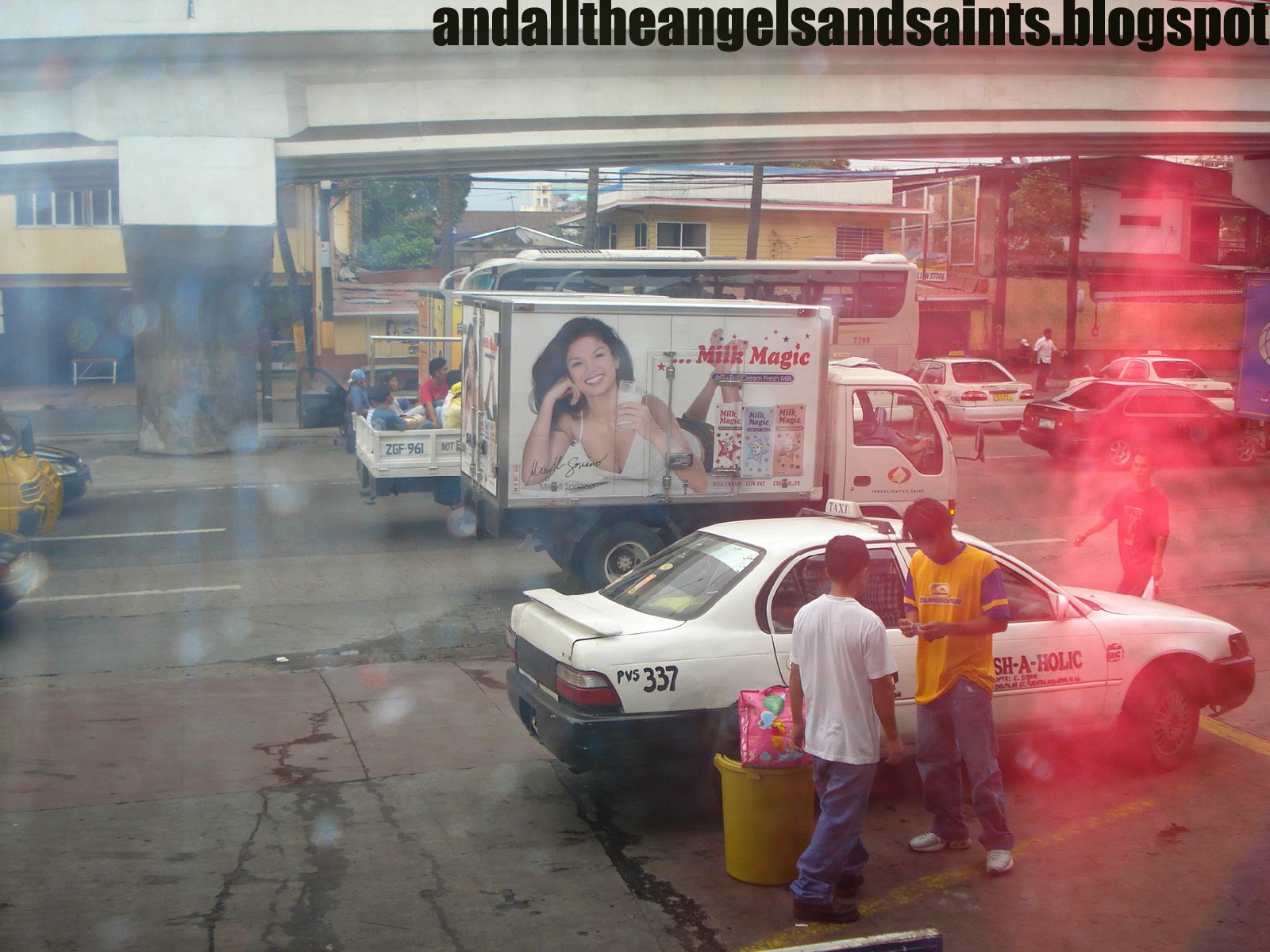 At the far end of Monte de Piedad St., I saw heaps of organized trash and stuff strewn on the sidewalk. The front of his house was littered with old 1960s magazines and newspapers, bric-a-brac and paintings, paper documents, jugs and glasses, softdrink bottles, soda cases, old toys, 1970s calendar, ceramics, and every conceivable house junk known to Man. I knew I had arrived at the right place. 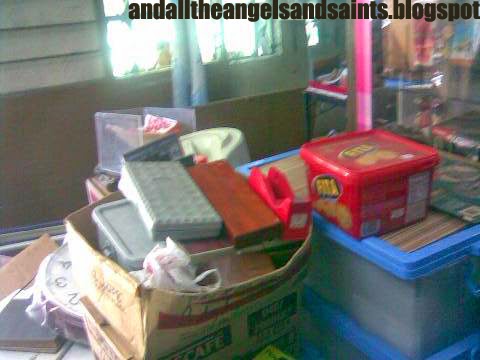 My heart always palpitates when I see never-before seen junkyards such as this, my kind of hunting grounds for antiques and collectibles. I was greeted by a hulking young man, who lifted the tarpaulin awning shielding the front of his house, further revealing more flotsam and jetsam. “Ah, we expected you”, he said, and “we were told of your collecting interests by dealers in Kamuning, so we've prepared some items that may be of interest to you.." 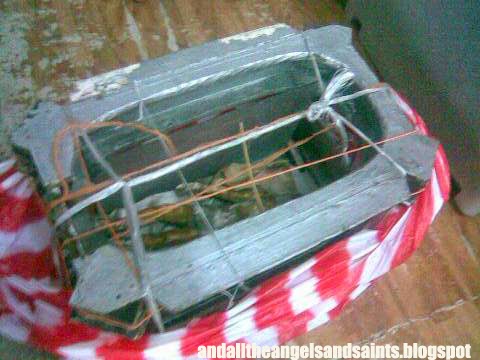 I was not prepared for the item he showed, which was to become my most wanted object of desire. It’s inconceivable that this treasure could even be found here. 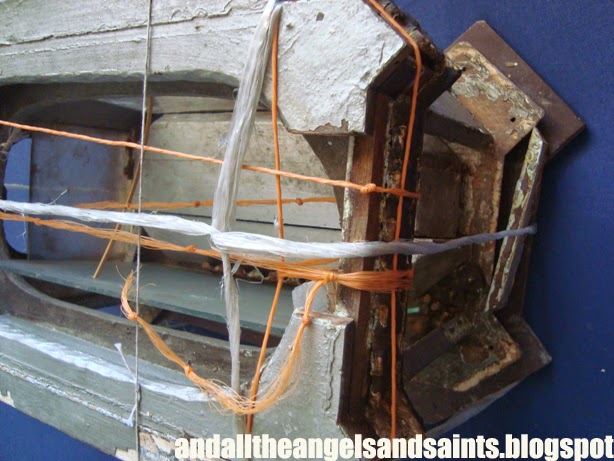 In fact, I had even ignored this thing on the floor, casually placed inside a red shopping bag, lost amidst the trash and thrift shop stuff in the small, cramped apartment. "This here is an ivory Christ...", he said, "but the case is a bit dilapidated..." 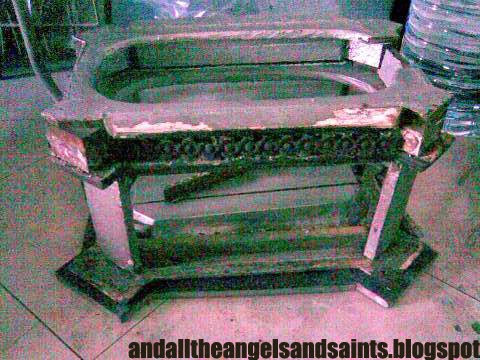 Ivory? Sto. Entierro? He must be kidding. I peeked into the shopping bag and sure enough, inside was a small calandra (display casket) with wooden and glass parts that have started to separate--- it had to be secured with strings to keep it together. 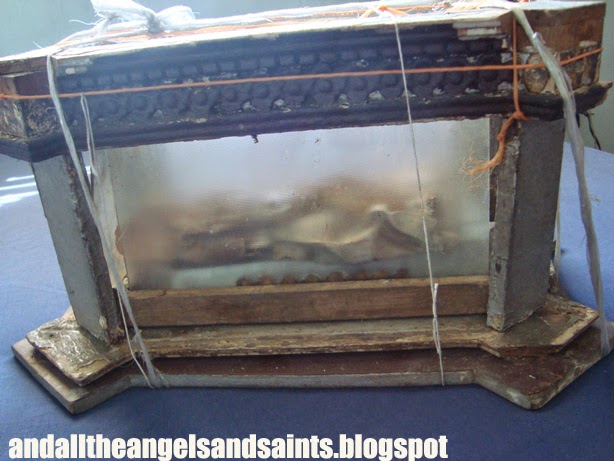 Then lo and behold! Inside was the wooden body of a dead Christ—with an ivory head. I was stunned. Ivory Santo Entierros are so hard to find in the market, that I have only seen one for sale, which I eventually got, never mind if the Christ was made of terra cotta. The rest are in private collections. 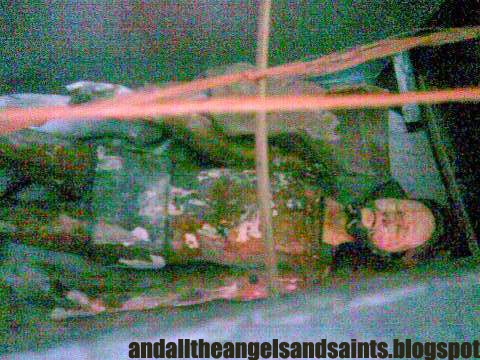 Now this Sto. Entierro is of ivory—the head that is. Closer inspection revealed that the head is of solid ivory, with beautifully carved features. 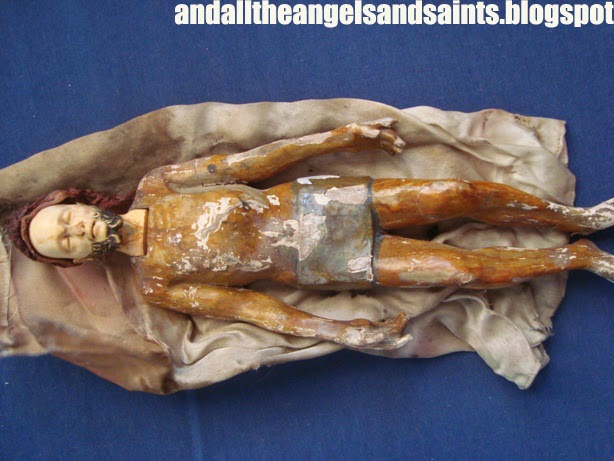 The only drawback was the nose—it had been sliced off neatly. It’s intriguing to think that the ivory part was used as an anting-anting (amulet) by a Katipunero (Philippine revolutionist) or that it was cut by an insurgent to disrespect his aquiline-nosed colonizers. 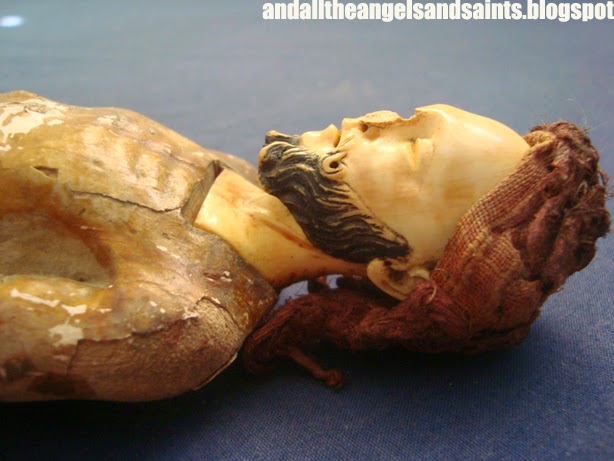 But the wooden body was in good condition, the fingers complete, with just a few toe tips missing. Its wig had disintegrated many years ago, but even the skullcap was there. A few trips to my santero will easily resurrect the Dead Christ and restore it to its former glory. 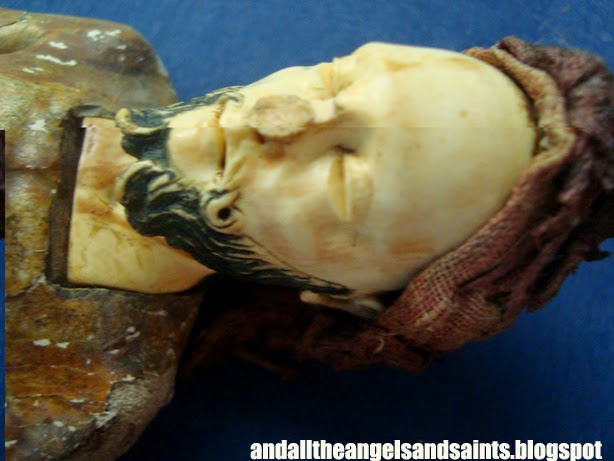 Putting my great negotiation skills to work, I arm-twisted him into selling the photos, the folk santos and the ivory Sto. Entierro for one, neat package cost that I offered. He agreed—and he even threw one small crown for a santo as my buena mano bonus. 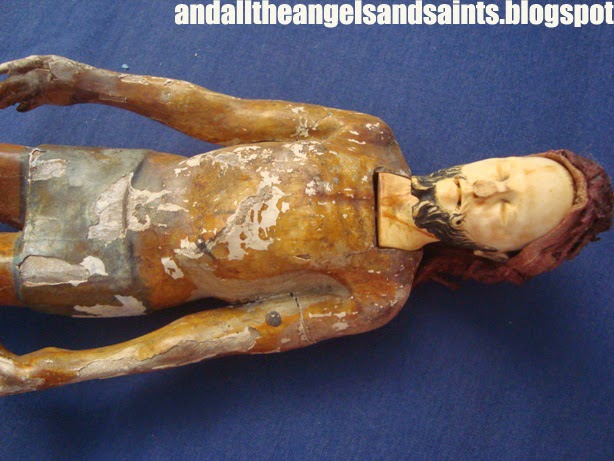 This Sto. Entierro, certainly, is my find of the year. Who would think that I will find this treasure buried in a junkyard, along a boulevard of broken dreams and damaged goods from old homes? And, did I tell you that he even led me to another giant stockroom across the street that was crammed with the same stuff from wall to floor. I am sure there are other spectacular antique finds there, but I’ll leave that for another day. 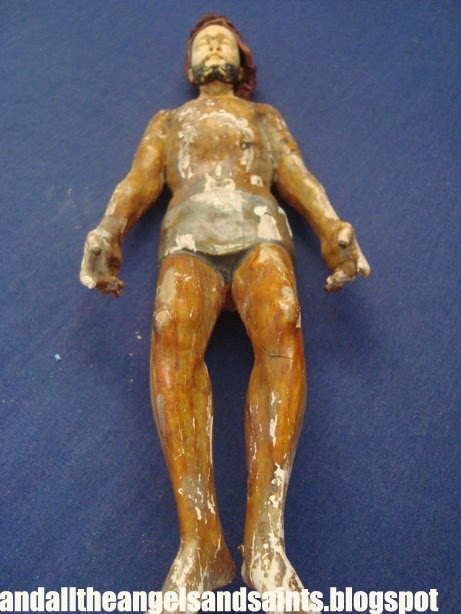 Meanwhile, if you happen to be walking along Aurora Boulevard—don’t forget to keep your eye on those heaps of junk littering the nooks and crevices of Monte de Piedad St. On that same street, lightning may strike twice, and, underneath the debris and detritus, you’ll be able to dig up your own find of the year!