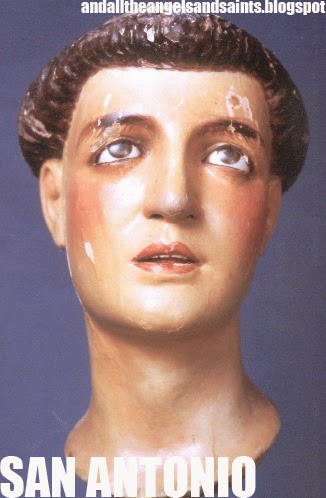 HEADS WILL ROLL. All these exquisite antique santo heads from the Philippines were auctioned off on ebay, by the controversial antique dealer, Rory Bacus. The fate of unsold santos remain unknown.

One of the most controversial dealers of Philippine religious antiquities was the late Rory Bacus of Cebu, who listed his business as an exporter-importer of woodcarvings. In the early 2000s, Rory Bacus, under the name "robacus", posted regularly on the international auction site, ebay, many religious artifacts, examples of which are shown here on this page. 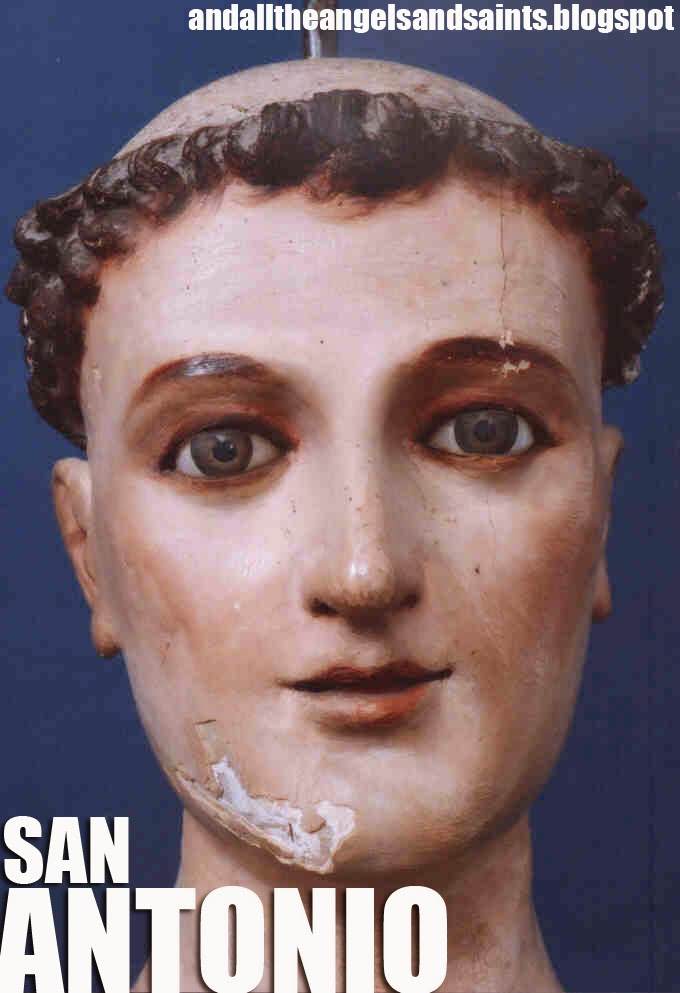 Bacus has been associated with the loss of many old religious images from Cebu parishes, which includes figures of Virgen Dolorosa, Baby Jesus of Mount Carmel, San Jose, Nazareno and Sta. Monica, from the Santa Monica Parish in Dalaguete, Cebu. 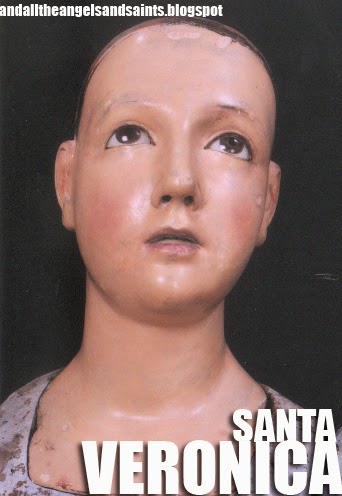 These, along with 158 icons, including 58 crucifixes and other sacred artifacts, were recovered in a raid conducted in the house of Bacus in late April 2003. Bacus had also been allegedly involved in the disappearances of many images from different churches in and outside Cebu. 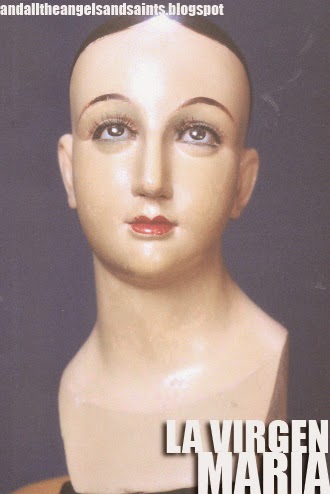 In October 2003, the Archdiocese of Cebu charged the noted antique dealer of fencing various religious artifacts. Included in the complaint at the City Prosecutor’s Office was an affidavit of Rosa Navarro, the treasurer of the Badian pastoral council who testified that she was able to recognize a cherubim icon, among the  icons seized by the police from Bacus’ house in a previous May 2003 raid. 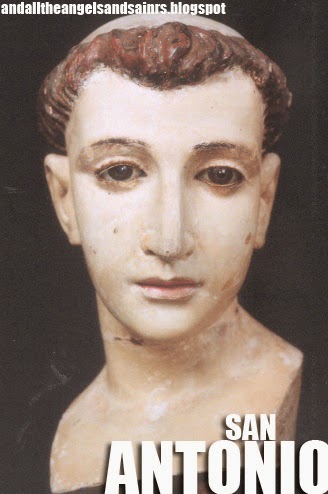 On April 25, 2003, prior to the serving of the search warrant, the police were also able to retrieve ten antique religious icons at a house in Guizo, Mandaue City, reportedly owned by Bacus. Agapito Torrentira, councilor of Inabanga town in Bohol, and barangay captain Emiliano Divino, of the same place, came to Cebu and identified two of the icons recovered as among those stolen from barangay Cambitoon chapel, of the town. 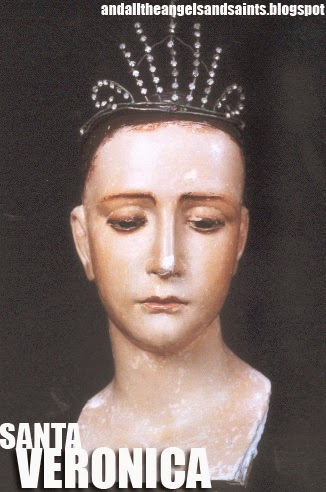 A second police raid conducted later yielded  the images of San Isidro Labrador, San Agustin, and Our Lady of the Immaculate Conception, verified by the 2 Bohol officials as items stolen from their place.Carcar residents, Josefina Roldan, Angeliza Tanodtanod, and Silvina Francisco had also stated that they had identified another icon from Bacus, as the one stolen from a chapel in barangay Perrelos of the town. 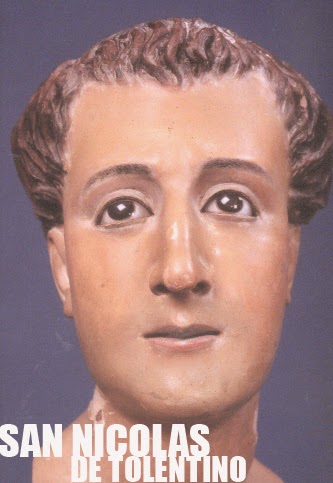 However, Bacus’' lawyer had earlier questioned the search that the police had conducted, arguing that they used a general warrant, which was not specific as to what objects will be searched. The lawyer also contended that the police were not able to establish that icons seized were indeed stolen, as alleged. She said those icons could not be declared as illegally possessed if there is no evidence to show these were stolen somewhere. (TO BE CONTINUED)

Sources: http://www.philstar.com/nation/226051/cebu-archdiocese-sues-antique-dealer
All pictures were grabbed and saved from actual postings on ebay between 2000-2003.
Posted by Alex D.R. Castro at 5:31 PM No comments: 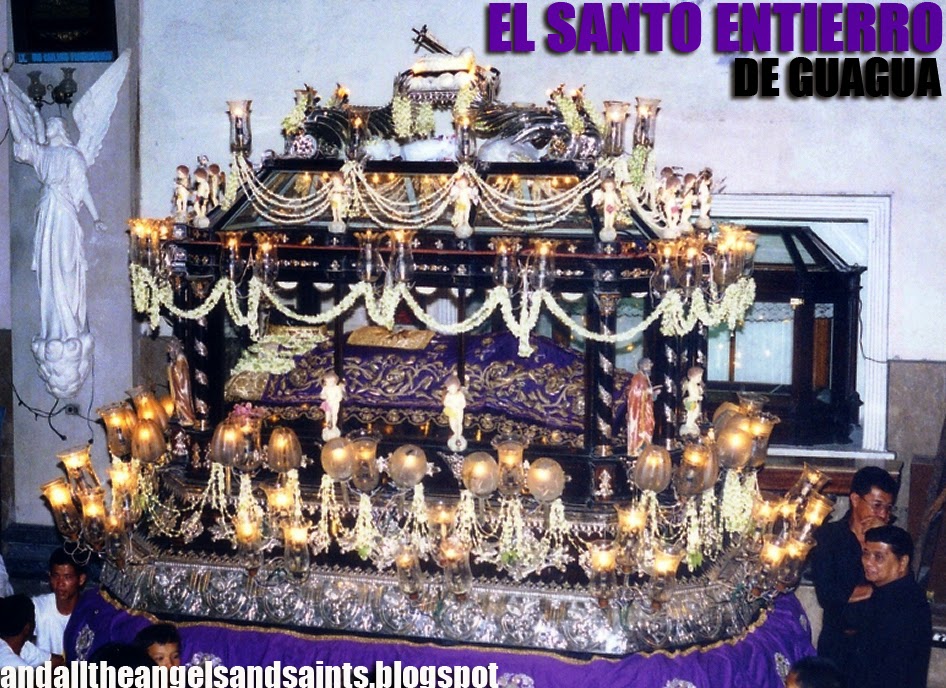 EL STO. ENTIERRO DE GUAGUA. Considered as one ofthe most beautiful and most opulent in the country, the Sto. Entierro of the Velez-Ynfante Family is shown here during the Good Friday procession in 20__, Phot courtesy of Dr. Raymund Feliciano.

The Santo Entierro of Guagua has been the soul of the Velez family over the last 250 years. It takes a week to prepare, polish, assemble, clean and light up this elaborate silver carroza for the Good Friday procession. 150 volunteers are chosen each year from the Barangay Santa Filomena, Guagua to serve the Senor Milagroso. 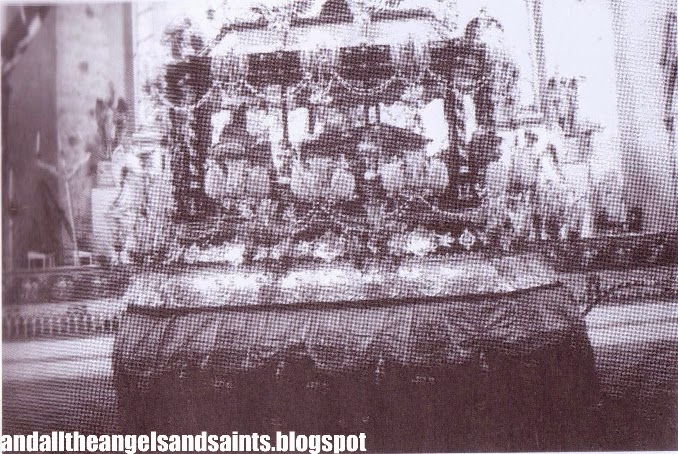 Sampaguita garlands are the only floral decorations allowed. When lighted candles proved to be unsafe for the crowds during the procession, electric lights were installed in the virinas of the carroza, requiring power from 11 heavy duty truck batteries. In addition, thirty violinists volunteer their services. The image of Jesus in repose is reputed to be the most beautiful of its kind in the country.
Posted by Alex D.R. Castro at 12:30 AM No comments: 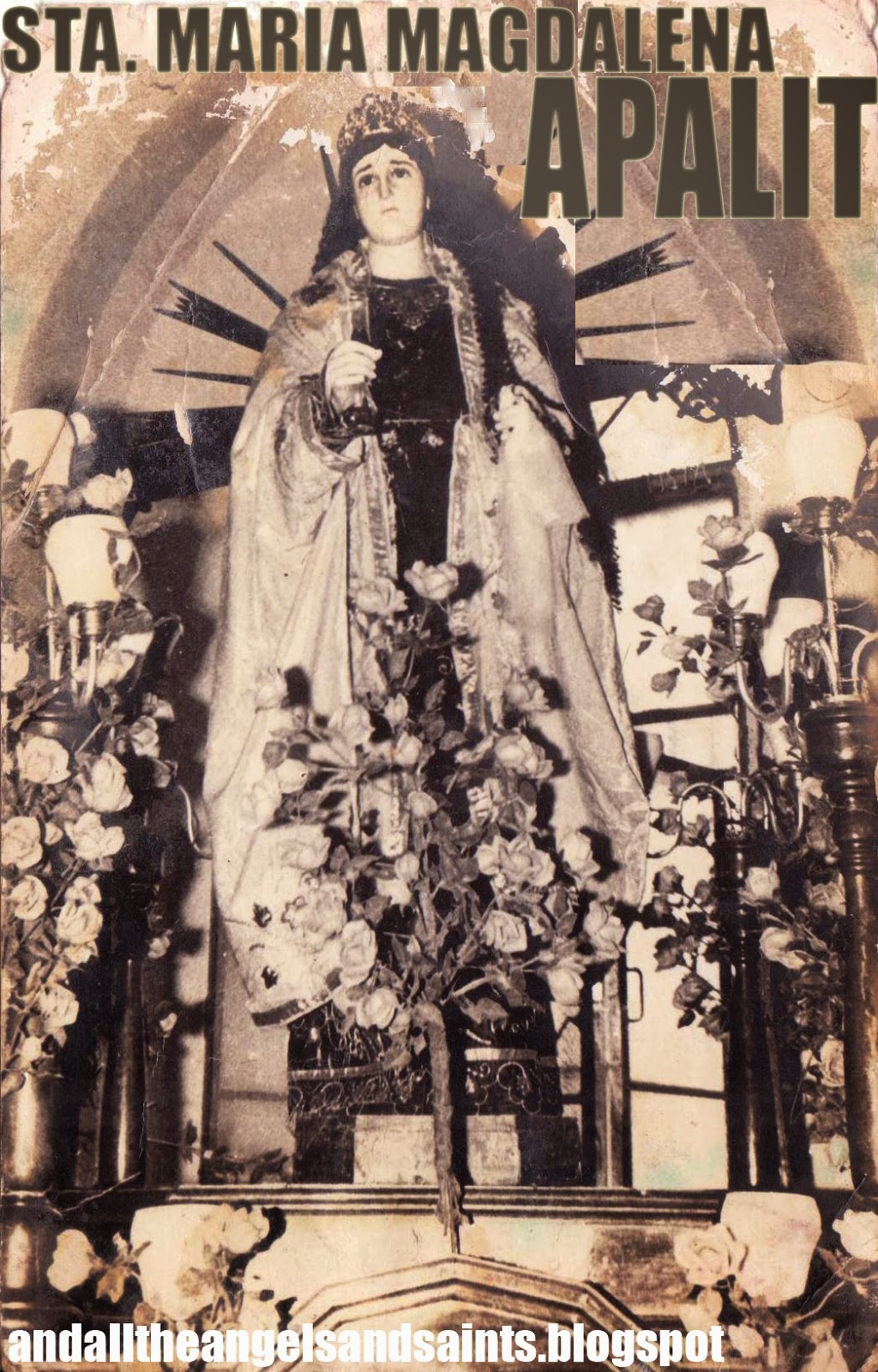 According to the recollections of the late father of descendant Mr. Toto Gonzalez, this original Magdalena was capeless; it was dressed entirely in embroidered burgundy velvet. It had a tiara of silver as well as a perfume bottle. Her accessories included real gold and diamond jewelry --- earrings, necklace, ring, and bracelets. It was always dressed by the female retainers of the family (never by the family members themselves) and was kept assembled the whole year through inside its glass case in a guest room filled with ivory santos in virinas.

This  Gonzalez-owned Sta. Maria Magdalena was unfortunately destroyed when the Americans dropped a bomb on the Gonzalez house in barrio Sulipan where Japanese army trucks were parked
(the bomb was actually intended for the Apalit bridge) on New Year's Day, 01 January 1942. 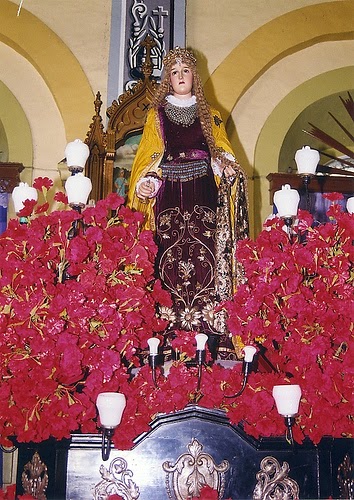 After the war, in late 1945, Dna. Charing commissioned "Talleres de Maximo Vicente"  to make a new Magdalena image and carroza, for Apalit, to replaced the lost ivory image. Maximo Vicente asked Charing Gonzalez for a photo of the original Magdalena but she had none; she simply gave him carte blanche to produce one. The result is a beautifully carved wooden image with an expressive face and hands, with an "encarna" that made her look Jewish. She stood at 5'6" tall without the 4" base.

The famed santero arrayed her with long hair of "jusi", a burgundy vestida and golden yellow cape with brass flowers dipped in silver then gold, and a double-plated (silver and gold) tiara. She holds her attribute, a  glass perfume bottle,  Vicente also provided a classical wooden carroza with silver-plated brass decorations and 1940s milk glass virinas. Mr. Toto Gonzalez remains the current caretaker of this exquisite Sta. Maria Magdalena, and she continues to lend her regal presence in the annual Holy Week processions of Apalit.

(Many thanks to Mr. Toto Gonzalez for providing the background information on Apalit's Sta. Maria Magdalena, and to Dr. Jojo Valencia for the 1973 photo.)
Posted by Alex D.R. Castro at 6:29 PM No comments: