201. A PORTFOLIO OF RELIGIOUS SCULPTURE

The reproductions of Philippine religious sculpture in the section that follows are from a single private collection. Re-posted from Catholic Digest, Commemorative Issue, April 1965. 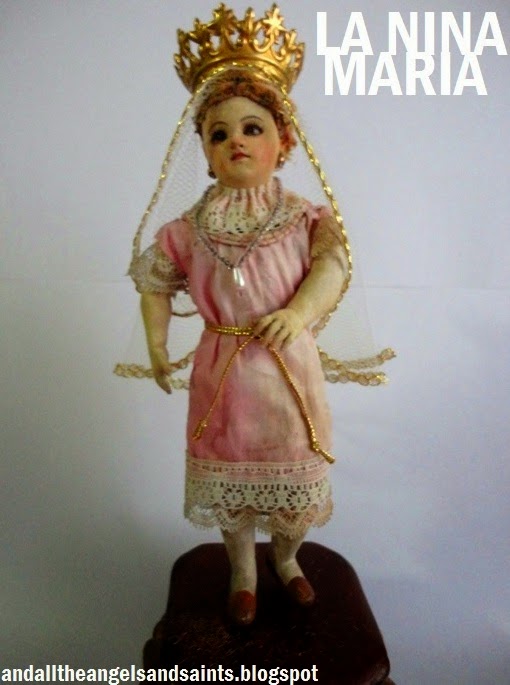 ALL DOLLED UP. A mystery wooden figure generously given to me that was initially thought of as a doll, became the young Mary, La Nina Maria, when fixed and assembled on a carved santo base.

One of the most intriguing pieces to come my way is this small, wooden figure of a young girl, no more that 5 inches tall. It actually belonged to a nephew of mine who was an avid collector of images too—and he sent the photo by phone, showing 2 small figures in the palm of his hand—that of a Nino Navidad and this girl figure, which, I concluded was a toy, maybe of composition or bisque. My nephew, however, told me it was made of wood; there were a few doll makers who crafted dolls of wood—Schoenhut was one, famous for their circus figures as well as their dolls that were described as “indestructible”. My nephew knew that I collect antique toys and dolls, so he gave this girl doll to me, a generosity which I accepted. 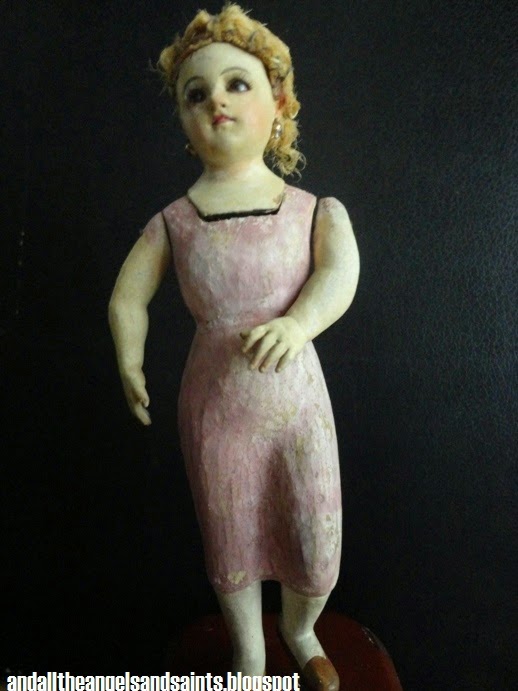 My curiosity was further piqued when I received the doll—indeed, it was made of wood, but after awhile, I wasn’t sure if it was a doll at all. First, there were pegs on her feet, which meant that it must have stood on a base —just like a santo would have. Then, she was painted in the style of a santo, from her face with a pinkish blush to her painted torso and her feet with shoes painted on. Why, she even had on a silken blonde wig that had partially deteriorated and eyes outfitted with lashes! On her ears were a tiny, tiny pair of bejewelled earrings--real gold, so I was told--but which I still need to validate. 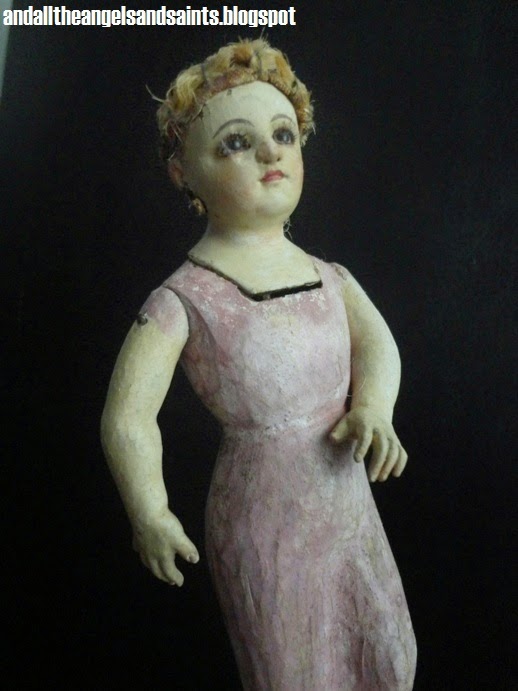 So delicately carved was the little wooden figure, evident in her very fine fingers. Her facial encarna was also intact, with just the slightest hint of color on her cheeks, similar to Latin American and Italian santos. Finally, unlike dolls which bore the maker’s name on its body, this wooden figure had no markings at all, wrought by anonymous hands. 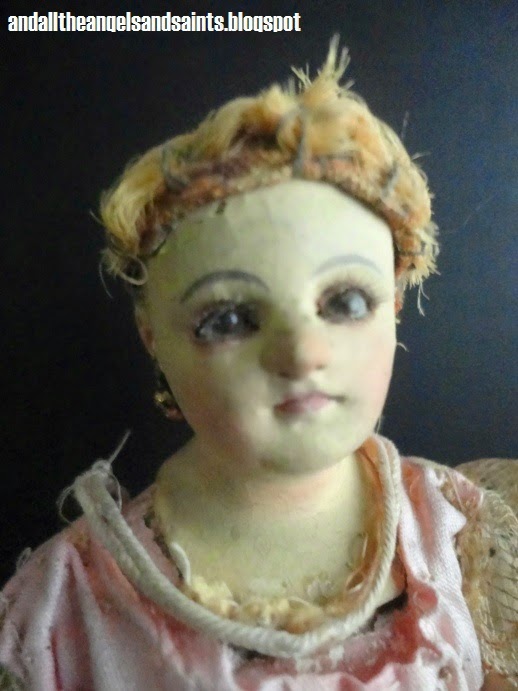 I therefore concluded that this mystery figure was not made locally; and that, with a certain degree of certainty, it was not a doll. I informed my nephew of my belief that since the image came with the Niño, it could be a crèche (nativity) figure, part of a tableau that consisted of a group of people visiting the newly-born Christ Child. 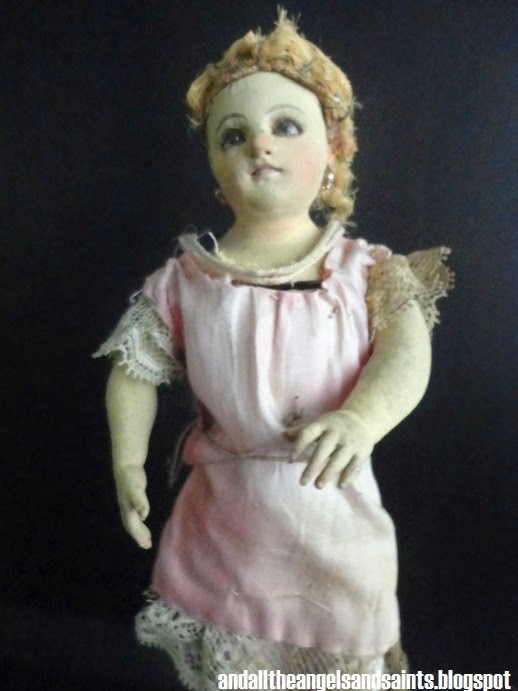 I know that by tradition, the size of the image was disproportionate to the Niño, just so to emphasize the importance of Jesus above everyone else. But then my nephew told me that he got the Niño and the doll-like figure from 2 different sources—which dashed my theory. 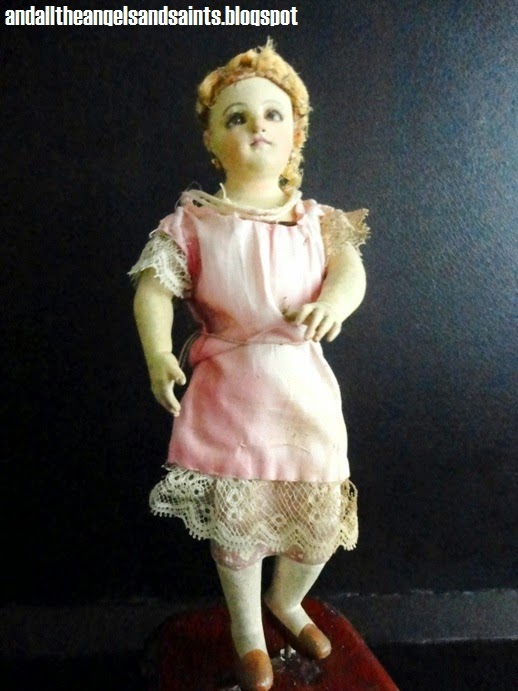 I shared the photo with my santo restorer and I just casually asked if this mystery figure can represent the image of the young Mary—“La Niña Maria”, as she is fondly called. He responded with a resounding “yes””, this, despite my lingering doubts about her true identity. 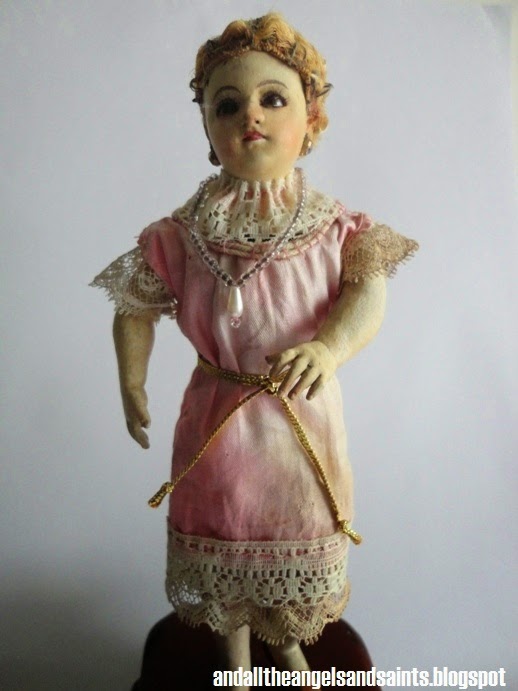 I cleaned her up and fixed her fragile one-piece pink dress, mending tears and reinforcing the lace with an additional layer of vintage lace. 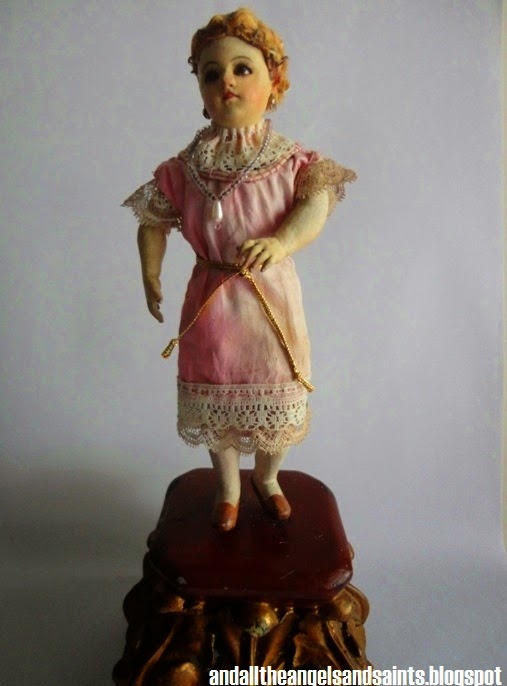 Then, I repaired the collar an added a ruff of lace as well. Why, even hand-strung a necklace of miniature antique beads with a pearl pendant for her to wear! When I set her on a vintage peaña, why it did look like a Santa! 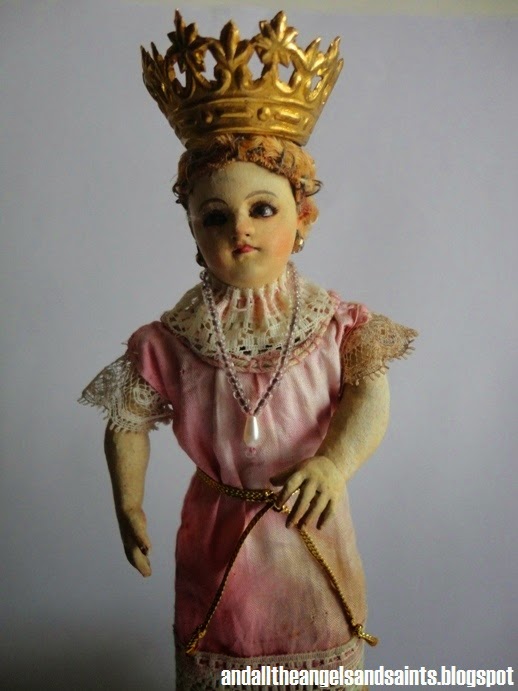 The finishing touch was when I found a vintage crown I saved from some forgotten restoration project and set it on her head—“La Niña Maria” came to life!! 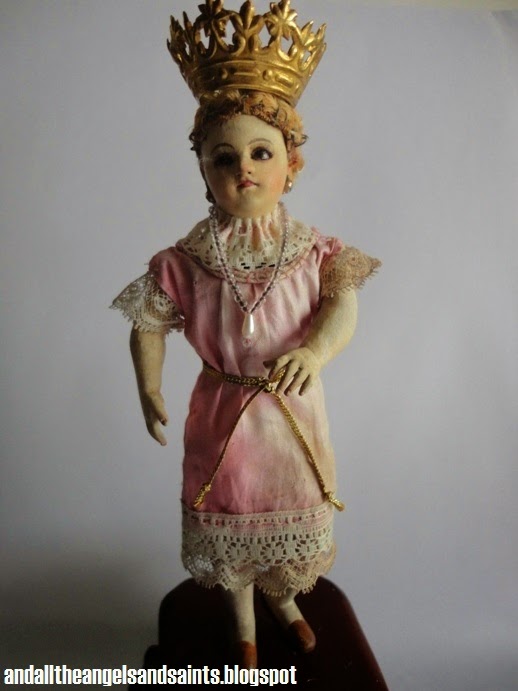 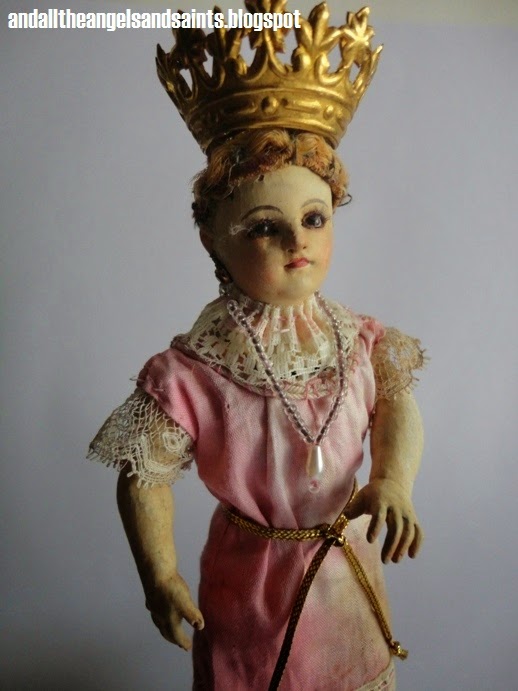 I will perhaps, never know if I have a sacred figure or a plaything, but that is all immaterial to me now. What I do know is I have an antique treasure in my hands, worthy of salvation and safe-keeping, a source of personal joy and fascination for me, for years to come. 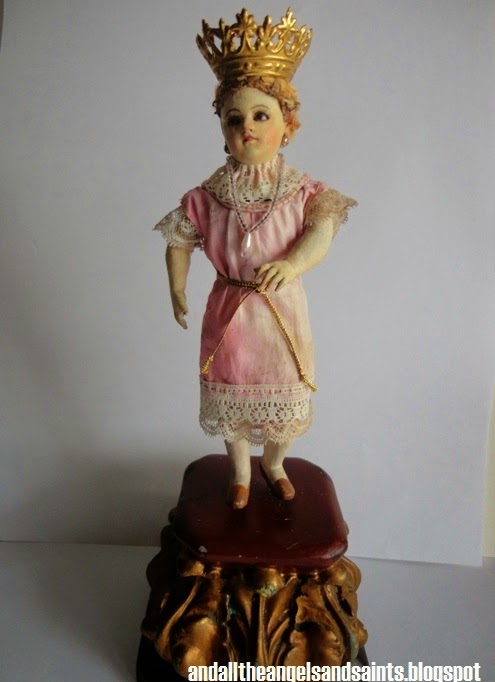