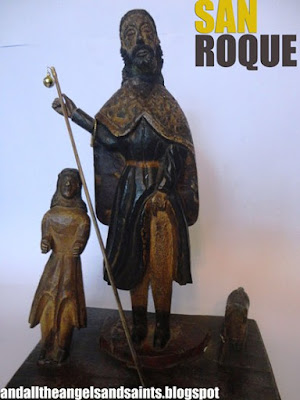 San Roque (St. Roch of Montpellier)-- along with  San Vicente Ferrer, San Isidro Labrador, San Jose--are perhaps the most popular santo devotions in the early days of our Christianization, this, based on the abundance of images carved in their likeness.  San Isidro was a natural choice for an agricultural country, while San Jose, well, he was Jesus’ father. The winged San Vicente was known as an “angel of the Apocalypse”, and angels, too,  appear in the iconographies of  San Vicente and San Isidro Could it be our fascination with heavenly winged messengers  that drew Filipinos  closer to these saints? 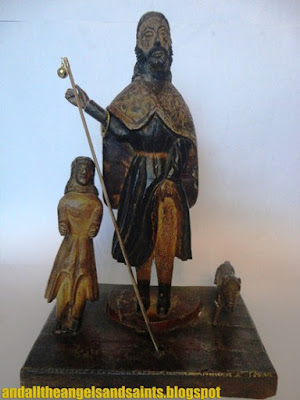 A more plausible explanation was that our islands and its people were prone to widespread epidemics. The cholera pandemic that killed a million people in Russia hit the Philippines in 1858. The great cholera epidemic would happened again in 1882 and from 1902-1905 that claimed over 200,000 lives.  In the course of time, we have had severe outbreaks of  smallpox , typhoid fever, malaria and tuberculosis.

Our Spanish colonizers, in order to facilitate their evangelization, introduced us to San Roque, his life and his works---how he ministered to the sick in plague-ridden Italy, until he got ill himself. He retreated to a cave where a dog came to bring him bread for sustenance, and licked his wounds that healed them. After his death, an angel was said to descend from heaven, holding a tablet which he laid on the head of the saint. On it was written a prayer, which declared that anyone who calls on San Roque will be spared from  any pestilence. 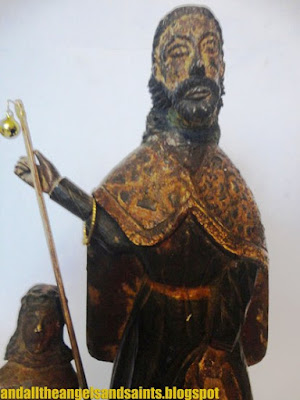 Because of this, the friars urged the Filipinos to invoke the saint against epidemics and “peste”, cholera, most specially.  People also dropped down on their knees to appeal to San Roque to cure their skin ailments, relieve the pain of bad knees, and keep their dogs healthy.

I can’t even remember what particular shop I brought my first antique San Roque. I do know that I got it in the early ‘80s from one of the stores in Mabini Art Center, then one of the ‘antique’ enclaves of Ermita. I paid exactly Php 170 for this primitive folk example,  which came complete, although its head seemed to have fallen off and then reattached at some point. I guess this was why I got it for that bargain price, as you can get a perfect set back then for Php 300. 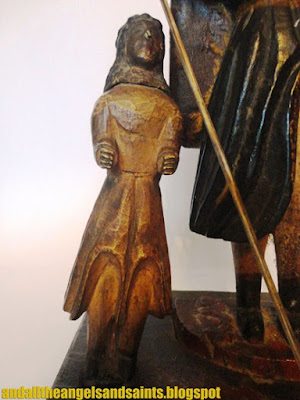 The 12 inch., rather thin San Roque stands on a plain, rectangular base, adding ¾” of an inch more to its height. His head sits askew on its shoulders; I had thought it was due to the bad restoration, but I had the head properly re-attached since, and it seems it was really carved with an awkward tilt. The saint’s eyes are bulgy, the beard full, and the mouth is wide.

Wearing a pilgrim cape and a short tunic, San Roque is shown lifting the hem high to reveal the wound on his left knee. There is quite a distance between his pointing finger and the location of the wound though. Note also how rough the folds of the tunic are carved, 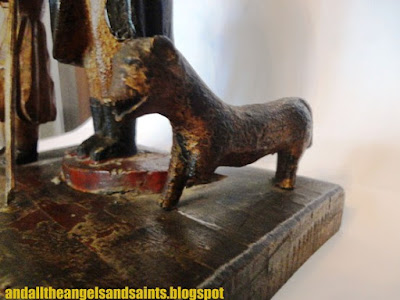 He holds a staff with his right hand—I lost the original staff when one of his fingers broke—the one that secured it in the first place. What he now holds is a replacement fashioned from a bamboo barbecue stick. In place of a carved water flask, I just hanged a tiny metal bell.

The unimpressive angel—carved from a narrow piece of wood—stands 7 inches, and no longer has its tablet. It could have been made of tin, on which a native ‘oracion’ would have been handwritten. The native dog has broken one rear and one front foot, but  it has still the ‘pan de sal’ firmly between his teeth. 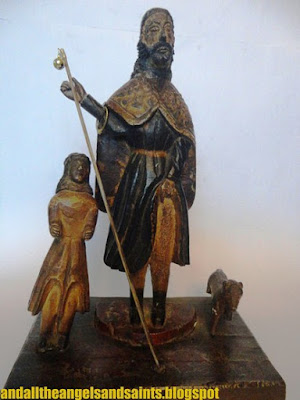 I have kept this San Roque for some thirty years—unappealing it might be—primarily for sentimental reasons. I bought it at a time when I had the audacity to start a relatively expensive hobby, while struggling to make a living.  The thought of acquiring better quality santos was farfetched from my mind, I had no choice but to buy only what I could afford—often the headless, armless, imperfect ones--the kind Mabini dealers regularly pass up. In all those years that I’ve had San Roque with me, I have neverbeen visited by any pestilence nor  afflicted by a malady of the serious kind---except perhaps, antique addiction!
Posted by Alex D.R. Castro at 4:13 PM 5 comments: