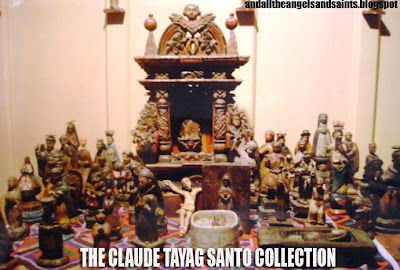 Artist, painter, culinary chef, restaurateur, watercolorist, furniture designer, food and travel columnist, award-winning author, furniture designer, antique collector--there are so many hats that  Claude Moises Tayag (born 1956, Angeles City, Philippines) wear, and the great thing about him is, he wears them so well--making him a master of everything that he chooses to venture in. 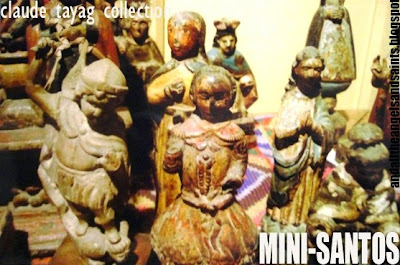 But this Kapampangan "Renaissance Man" describes himself as a self-taught artist, a passion he indulged in as an architecture and economics student at the University of the Philippines. Mentored by another great Kapampangan artist and literary giant, Emilio "Abe" Aguilar Cruz, Claude (pronounced as "Cloud") acquired a taste for all aspects of the creative arts, spurred by his collecting interest--Philippine colonial santos. 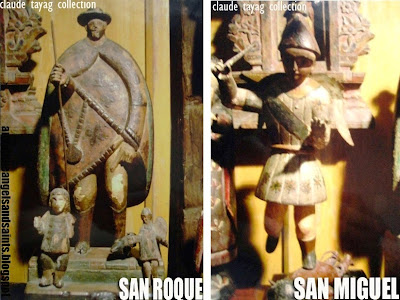 Claude started collecting antique miniature santos; he put a ceiling to the height of santos he would buy--no more than 8 inches tall. He would sadly walk away if a santo that initially caught his fancy measured more than 8 inches, and he stuck to this collecting discipline, amassing these Lilliputian santos slowly, but surely. 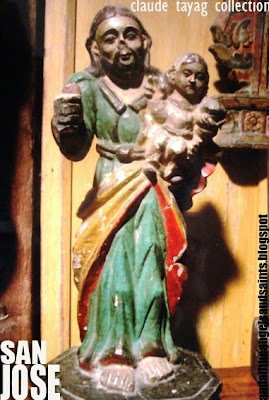 In fact, they were his inspirations in 1978, when he first barged into the Manila art circuit. Claude exhibited his vivid watercolor santo paintings, collated in a folio of plates, now just as collectible as his artworks. 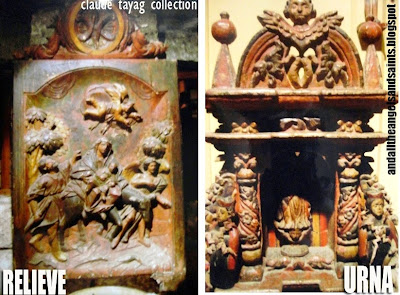 His art grew to include paintings of Philippine festivals, the landscapes of the northern highlands--all vibrantly painted with characteristic spontaneity and vigor. But though he put on hold his santo collecting, his love for these folk images--he was partial also to primitive carvings--never waned. 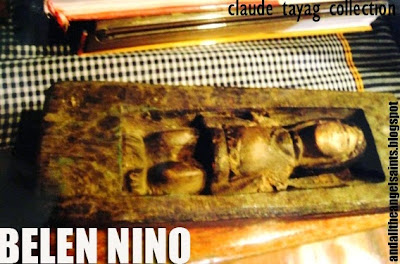 In his spacious "Bale Dutung" (House of Wood) in an Angeles subdivision, Claude keeps his collection on a large antique table. The centerpiece urna is flanked by santos--mostly of heavy wood-- of all titles and patronages--but all under 8 inches. 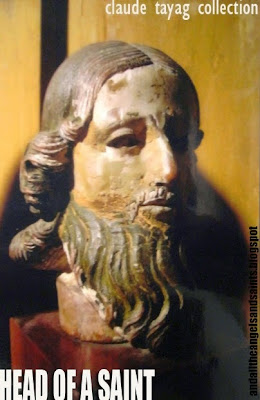 There are Ninos and Virgins, heads of saints and tableaus, mostly with Bohol provenance (santos from this province are typically small, painted with folksy colors and carved from heavy wood. 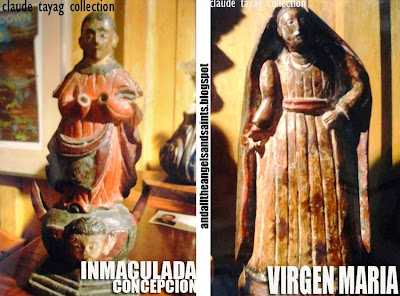 It is interesting to note that in 2015, Claude returned to his first love--watercolor painting. When he took up his brush again, it came as no surprised that he chose for his subjects once more--colonial folk santos, no less! 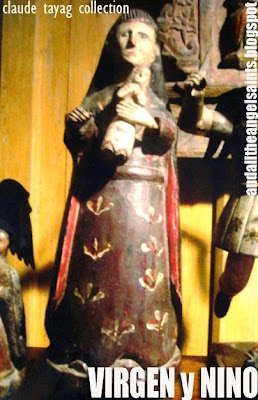 On this spread are some santos from his fabulous, but well-selected collection. I had the privilege to personally view them some years ago, when he and lovely wife, Mary Ann, hosted a small dinner for his high school batchmates--which included me! Proud Class of 1973 of Sacred Heart Seminary (now Chevalier School) in Angeles City. 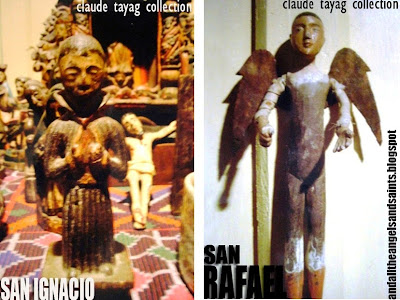 Here we are at the Golden Anniversary of our high school, where we were both named outstanding alumni of  Sacred Heart. Beyond collecting santos...we also collect memories! 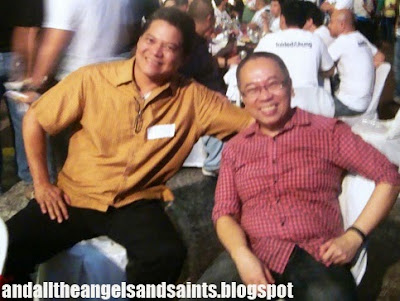 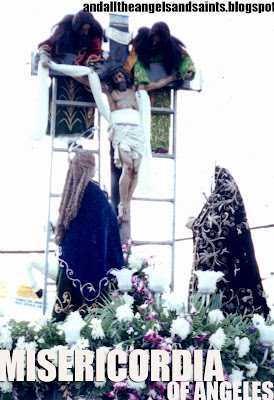 The Santa Misericordia of Angeles is owned by the Evangelistas of this city, known for their pioneering telecom business. It was commissioned by Don Roman Bernardo Evangelista and his wife Dona Francisca Dizon Dela Resma, along with another statue intended for the La Naval celebration—the image of San Miguel Arcangel. 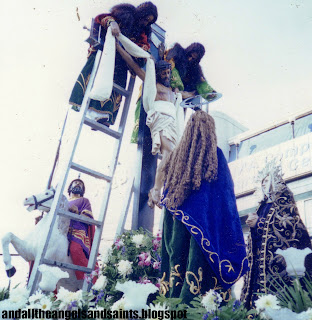 The Misericordia was completed in 1907 to honor the birth of the couple’s youngest son, Santos Evangelista, while the San Miguel, given to the eldest son, Domingo Sr., was inaugurated in 1916. 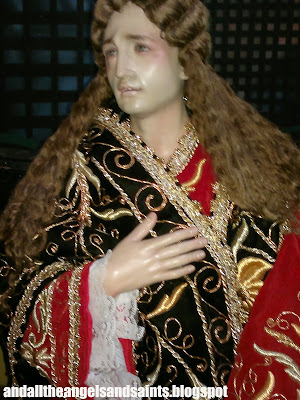 The Santa Misericordia, also locally known as “Macapacu Qng Cruz”or the Crucifixion, is a tableaux that depicts figure of the crucified Christ flanked by San Juan and the Mater Dolorosa. Interestingly, there are two other characters atop the ladder another horse-riding soldier positioned at the back of the cross. 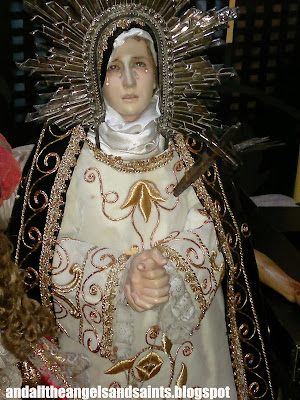 With all these santo figures, the Misericordia looks more like another scene known as The Descent from the Cross (El Sagrado Descendemiento), in which San Nicodemus and San Jose Arimathea are shown bringing down the body of Christ from the cross. Could it be that the two figures on the ladder were later additions to transform the Crucifixion into a Descendemiento tableau? 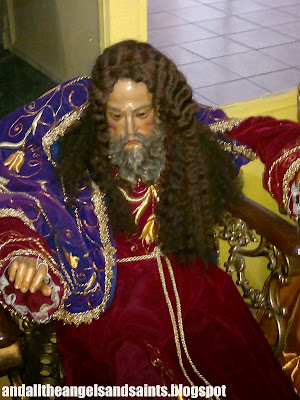 In the past, Angeles’ Sta. Veronica, for example, is converted into a Sta. Salome on Holy Thursday. I have also seen two-faced Virgins so that using the same body, the image can either be a Dolorous Virgin and a Joyful Virgin, with just a twist of the head. 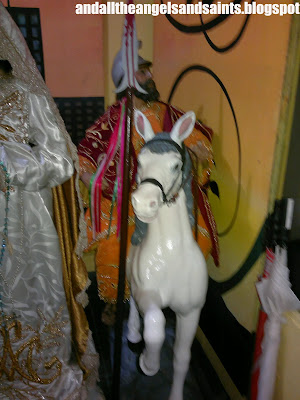 When the Misericordia was completed, it was given to the care of Don Ramon’s only daughter, Leonora Evangelista (Panlilio) and the aforementioned youngest son, Santos. When the Evangelista siblings passed away, Jesus and Zon Gopiao, became the caretakers of the carroza. 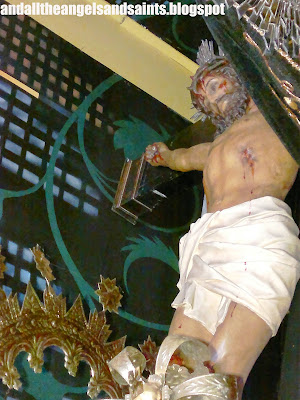 When not in use, the santos and their carrozas are stored in a spacious room designed expressly for their safekeeping. 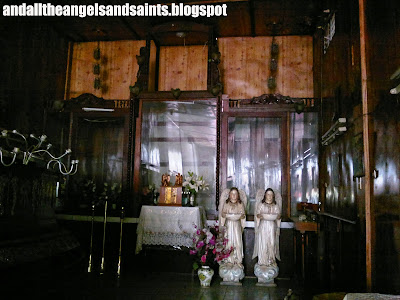 Today, the children of Leonor-- Gerry, Mary Ann Panlilio Reyes and William Panlilio, plus the 3rd generation members of the clan—continue the family tradition of caring for these beloved family heirlooms. They regularly participate in the annual Lenten rites of the city of Angeles.

I wish to thank Mr. Ira Jay Evangelista for the pictures and Mr. Josel Suarez for the bacground of the images, both of whom are descendants of Don Roman Evangelista.
Posted by Alex D.R. Castro at 4:47 PM No comments: