Fidel Araneta and Flash Elorde have many things in common. Both are from the town of Bogo, Cebu. As youngsters, they were so poor they ran away from home and staked out a living in Cebu City. And both packed talent in their hands: Flash with his boxing gloves and Fidel with his carving knife. 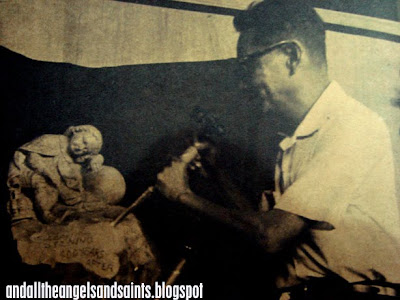 Sculptor Araneta hacks away at the wooden image of the “Sleepy Santo Niño”. The piece evoked praise during the centennial exhibit in Cebu last April. Many ordered copies.
Today, at 51, Fidel Araneta is easily the top-ranking commercial sculptor of Cebu City. His sculptural works are found everywhere in the Visayas and Mindanao. His patrons are mostly priests, secular and missionary, from as far away as Jolo. He has lost count of the munipalities in the South which have placed orders for statues from him.

Sculptor Araneta is a product of the U.P. School of Fine Arts. In school, he was a medalist every year. However, his family was so poor he had to quit school for good in his senior year.

As a child, Fidel never tired of shaping miniature objects from adobe clay, called ‘manggol’ in Cebu. He made fishes, elephants, lions—and whatever else his young, imaginative mind took a fancy to.

In the Cebu High School, Fidel turned up the undisputed artist (he’s also good at pen-and-ink sketches). The American principal suggested that his father send him to Manila for an art education. Upon Araneta’s return to Cebu City shortly before the War, he opened a sculptural shop of his own. Shortly after, he became known as Cebu’s most outstanding sculptor.

In Cebu today, it is likely that the religious or civic statue you point to with admiration is Fidel Araneta job. Even in Mindana provinces, his sculptural works are everywhere. During the Rizal Centennial in 1961, he could hardly cope with orders for Rizal statues for public plazas. The Dapitan City Knights of Rizal commissioned him t do a life-size concrete statue of the hero for the public plaza. Araneta’s work is the best to rise in the historic Rizal place of Mindanao. 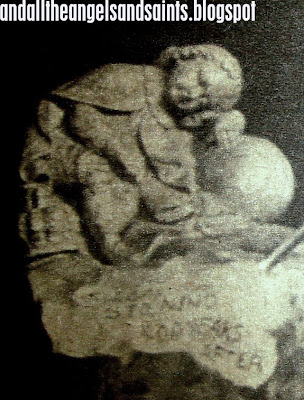 However, it is in the field of religious sculptural renditions that the Cebu artist makes his living. It is the rule, rather than the exception, that the altars and altar objects in Cebu’s 49 towns and four cities are Araneta creations. Araneta’s statues of saints come out in wood, plaster of paris and concrete. Recently, an Italian priest ordered from him a cubistic Madonna and Child. His Christ on the Cross in the posh Redemptorist Church of Cebu Cityis regarde by many as his masterpiece.

A religious man (he has a son studying for the priesthood in Canlubang and is himself a 4th degree K of C),he puts up a large elen, or crèche, ever Christmas season with the help of his wife. The objects are his works.

In the 50s, Araneta used to submit entries for the national sculptural tilt held yearly in Manila. His wooden bust of then U.S. President Eisenhower in 1953 won first prize. The Cebu artist likewise won a major prize for his bust of former President Osmeña. He donated several busts of great Filipinos to the national museum.

In 1961, he did a wooden bust of President Kennedy for a client n Manila. Early in 1963, the owner complained to the artist that a fissure or crack appeared on the temple of the bust. A few days later, JFK was shot dead on the same spot. A newspaper played up a big photo of the bust’s phenomenal damage.

During the 4th centennial fete of Christianity in Cebu this year, the sculptor and his eight assistants had to work day and night to meet orders. Moreover, Araneta was tapped to put up an art work for the national art exhibits at the Cebu Normal School in connection with the centennial celebration. 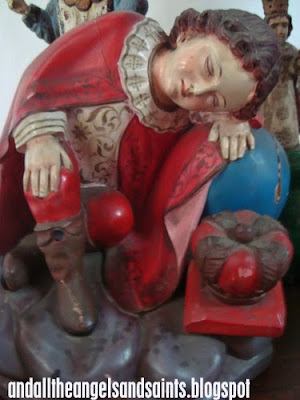 His rough-hewn piece evoked the lavish admiration of art lovers. It was a wooden Santo Niño in an unorthodox stance: reclining wearily on an oversized orb. (The sculptor titled it, “The Sleepy Santo Niño after 400 Years”). Many centennial visitors ordered copies.

Also during the Centennial Week, the Papal Legate, Ildebrando Cardinal Antoniutti, unveiled an oversized statue of Lapulapu at Camp Lapulapu, Lahug, for the Third Military Area Command. It was a work Fidel Araneta did upon the specifications of the Commanding Brig. General Silvino R. de Goma who made researches on the Mactan hero.

People in Cebu City today are saying the likeness is “closest” to the real-life Lapulapu. The Cebu City government supported the project and the unveiling was done last April 27, the 444th anniversary of the Battle of Mactan.
Posted by Alex D.R. Castro at 11:59 PM 7 comments: 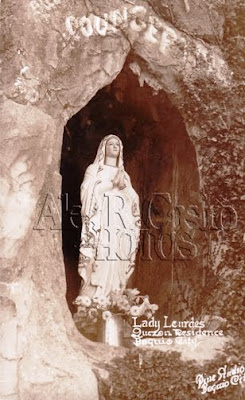 OUR LADY OF LOURDES. A popular tourist and pilgrim destination since the turn of the 20th century. The grotto, with the stone image of Our Lady continues to be one of Baguio's enduring landmarks. Ca. 1924.

One of Baguio’s long-standing landmark is the Lourdes Grotto at Quezon Hill in the western part of Baguio, overlooking the city. There, the painted stone image of Our Lady of Lourdes perches, reachable by 252 steps from the ground.

The popular shrine replicates the Lourdes grove where the Virgin Mary appeared to a young French woman, Bernadette Soubirous in Massabielle in the town of Lourdes, France. The devotion to Our Lady of Lourdes was approved in 1962 by the Pope and has since grown into a worldwide devotion.

The grotto was established in 1907 by the Jesuits and has since become a nationally well-known pilgrimage site, frequented by devotees and tourists, moreso during the Holy Week. Pilgrims usually negotiate the steep steps to reach the image of Our Lady, lighting candles at an altar before the image. 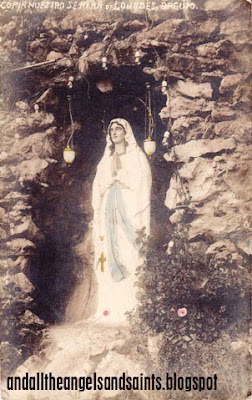 The grotto has undergone many facelifts through the years. Hanging milk glass lamps used to hang inside the grotto to light the image of Our Lady. This old picture, for instance, shows part of the painted inscription: 'Qué soï era immaculado councepcioũ,' a phonetic transcription of "I am the Immaculate Conception" which Our Lady declared to Bernadette in French Gascon Occitan language. Today, a metal arch frames it with the words "Tota Pulchra Es Maria" (Thou Art All Fair, Oh Mary.)
Posted by Alex D.R. Castro at 2:51 AM No comments:

51. Before & After: RESTORATION PROJECTS OF TOM JOVEN 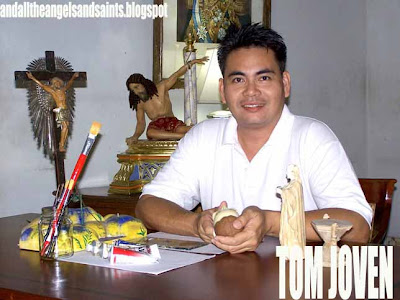 Tom Joven, the most accomplished ecclesiastical artist of Pampanga, has been at the forefront of major restoration projects for churches not only in his native Bacolor but also in other places of worship all over the Philippines. Joven's expertise has been sought by parishes from Luzon to the Visayas, and his original works are prized by the country's most formidable collectors of sacred art. A few rare creations in ivory have also been presented as gifts to high ranking church dignitaries from here and abroad.

Here, he shares with us some fine examples of his restoration projects: 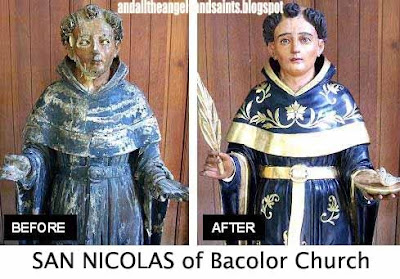 The wooden image of San Nicolas Tolentino in one of the retablos of San Guillermo Parish in Bacolor was heavily damaged during the lahar inundation of the town, which almost buried the ancient church. 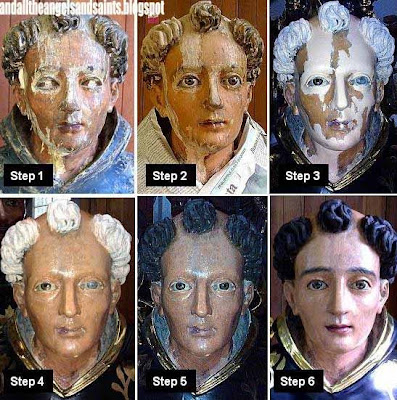 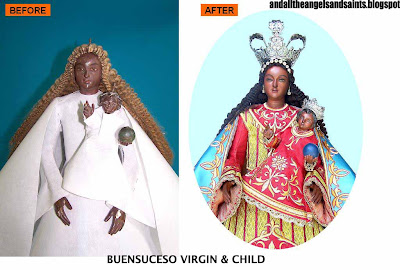 Our Lady of Good Success (Virgen de Buen Suceso) is a centuries-old image brought by Augustinians to Palanyag (now Paranaque) as a gift of the King of Spain to Filipinos. It is now housed in St. Andrew's Church and is known today as the "Patroness of Paranaque City". It is one few Virgins that have received the Canonical Crown in 8 September 2000. Joven was commissioned to restore this important image, inlcuisve of its vestments, and the results are shown in the pictures above. 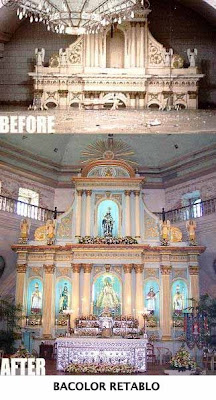 The church of San Guillermo was heavily damaged in the succeeding lahar flows that engulfed the town after the Mount Pinatubo volcanic eruption. Lahar almost buried the magnificent retablos of the old church, which eventually were recovered and restored to their full glory by Joven, who did it all for the love of his hometown and his Church. 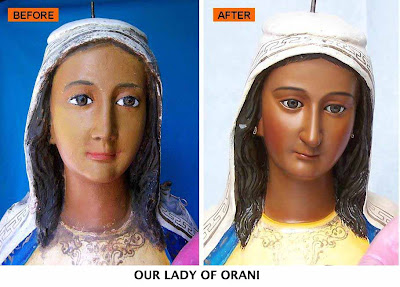 Our Lady of the Holy Rosary of Orani was another one of Joven's most memorable restorations. Brought by Dominicans to Bataan in 1587, the miraculous image was canonically crowned in 1959. It has been restored many times, but the results were not exactly up to par--until Joven was requested to step in to work on the Virgin and the Holy Child anew. 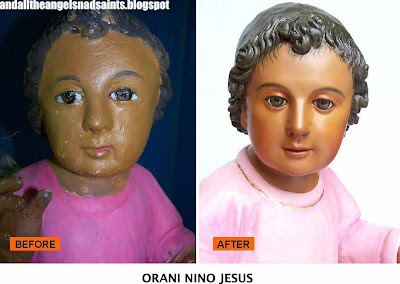 Joven, a stickler for tradition, adhered to the original look of the image, keeping the dark tones of the complexion as well as the colors of the vestments of both Mother and Child.

(My thanks to Mr. Tom Joven for providing all the photos for this article)
Posted by Alex D.R. Castro at 3:36 PM 5 comments: