Two young people, Mario Mercado and Lorna Montilla, are doing something few others have done: they are collecting old religious images, relics and other Filipiniana the hard way. And they are doing it for love.

With them it is not the collector’s cold-blooded mania for owning and storing precious odds and ends; it is with deep sense of conviction that somehow they will find again the Filipino soul in these bukbok-eaten, noseless, armless, and–in some instances–headless relics of our country’s past. These two dedicated enthusiasts are not swivel-chair collectors.

Having very little money, they cannot afford to wait for precious art items to come their way through profit-conscious agents. They have decided that the cheaper–through more dangerous–way to get their art pieces is to go out and look for them right at the source.

To Mario who is barely twenty-three this is the right way–the only way. He is hunter, explorer, boxer, writer, painter, amateur archaeologist, photographer, mountain-climber all rolled into one masculine, nervous personality. Lorna is wiry. And she is game. City-bred, she has always pined for the wide open spaces. And she has found in Mario a tough companion who knows his way about both in city and mountain fastnesses, in caves and dark-room. She asks for no quarters. And Mario gives none. Both young, they have no patience with restraint. Nor convention.


Once they had agreed on their itinerary they set out to fulfill it. The first place they decided to explore was Panay where Lorna comes from. After only a few weeks’ stay in the mountain regions of this province they returned to civilization with several crates filled with the most astounding assortment of ancient religious images, shards, plates, vases, jars, daggers, skulls, and yellowed manuscripts.


Mario says they have barely scratched the surface. They intend to return soon and continue digging. Lorna walked hundreds of kilometers with Mario and laughingly admits it was no picnic. She dug as fast as furiously as did Mario and the hired hands. She sweated it out, knowing that beneath the rolling knolls lie a pile of priceless artifacts which might give a clue to the history of our country–or at least of that part of our country. Hopping from one hill to another limbered up Lorna’s city legs. But, she said, it was worth all the pounds she lost.

A Religious Colony in Old Jaro

Jaro’s ruins betray the death of a vast religious colony, in the words of Mario. Its foundations are intact but its walls are deadly gray, moss-covered and weed-choked. Paintings inside its churches have somehow survived, murals have been retouched, betraying the inexpert hands of native artisans. 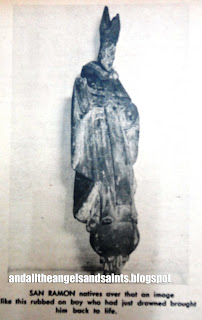 Attempts at sculptures abound in these ancient houses of God –but these, too, reveal the awkward groping for expression of unschooled artists.The two next took in Iloilo, Molo, Tigbauan and Oton which, Mario says, has been almost completely devastated by the convulsions of the earth.

But, he adds, there was something this violence could not kill –the beautiful palm-lined beaches and the sweet tender coconut meat on which they often had to slake their thirst and hunger.

Primitive Sculptured Statuettes
Collecting the religious images proved to be less strenuous but as interesting as digging for artifacts. The people are deeply religious, Mario says, and they keep in their houses–even in the humblest huts–wooden images carved hundreds of years ago by their forebears. Soon the the temporary headquarters where our explorers kept their finds began to fill up with all kinds of wooden images–sculptures that show attempts at reverence and form, though utterly awkward beyond description, sometimes comic in an openly honest though unconsciously satirical way.

The religiosity of these people can be best judged by the number of images they keep in their huts. There were crucifixes and extra-long, extra-short, extra-massive Christs with the bewildered eyes of dolls, or with Mona Lisa smiles, with blood oozing out in geometric pattern on their sides, and many such interesting features peculiar to primitive works of art.

The statuettes are so old they ooze bukbok from tiny holes on their heads and bodies, so frail that they break into pieces with the slightest fall. Since they look so ugly and mutilated, the town priests have refused to allow them to be carried around during processions–or to bless them during fiestas. So the people have kept them in dark corners of their homes–where the two collectors found them.


How they secured these relics is quite another story. Sometimes the people just flatly refused to part with them however tempting the offer that had been made from them. In most instances they accepted new mass-produced plaster images in exchange for their priceless ones.

After a while, though, people began to suspect the two. Stories were circulated about how they were spies or that the images they gave away were loaded with time-bombs or some such secret weapons meant to exterminate them. An old woman warned the people of Tigbauan who sold their statuettes to the strangers or exchanged them for plaster ones, that their departed ancestors would haunt them for thus desecrating these heirlooms by giving them away indiscriminately.

Meanwhile the two daring young explorers are getting restless once again. Already the city dust is getting under their skin and their limbs are beginning to get flabby with inaction. In a few weeks, they assure us, however, they will be out again exploring in parts unknown. What they will bring back this time will be quite another story.
Posted by Alex D.R. Castro at 2:27 PM 1 comment:

When Tiendesitas, a shopping complex located within Frontera Verde in Pasig on 26 Sep. 20015, it was met with much hoopla. After all, it was envisioned to be a budget-friendly shopping destination (“tiendesitas” means a cluster of little shops), with specialty “villages” that sold fashion, native food, pets, plants and other novelties.

Of course, for santo collectors, the opening of the “Antique Village” was a welcome section of Tiendesitas, another happy-hunting ground for antique santos, all in one location.

Indeed, the early list of shops that could be found there included well-known names like Sarimanok (Henry Wee), Laong-Laan Antiques (Yanga), Unang Panahon (Esposos), 888 Noble Antiques and Henry Babiera—who was instrumental in getting the shops together at the new shopping hub.

The shops did not disappoint, as the prices were relatively reasonable (the shops were not air-conditioned and the location—along C5—was then considered very far). But when access and generation of traffic became major issues, the shops started to close—and the “antique village” shrank in size to give way to more lucrative businesses.

Tiendesitas deteriorated to the point that the antique shops were reduced to a handful. Eventually, as the area became more developed commercially, Tiendesitas was upgraded by the developers in 2014, adding buildings, second-level shopping places, escalators and airconditioning. The business climate improved with its relaunch and today, Tiendesitas has 450 traders from all over the Philippines.

However, the same cannot be said of the antique shops. The dwindling supply of quality items forced more closures and for the remaining shops to carry lower-quality antiques and reproductions—a sad statement that the glory days of the Philippine antique trade is really gone.

In March 2011, a few years before its renovation, a walk around the antique village of Tiendesitas yielded these santo offerings from select shops still operating in the complex.

In the year 1640, several fishermen saw a statue floating on the waters of Laguna de Bay. Seeing that it resembled the statue of of the Blessed Virgin, they tries to bring it to Pakil, but they could not do so because it was too heavy. 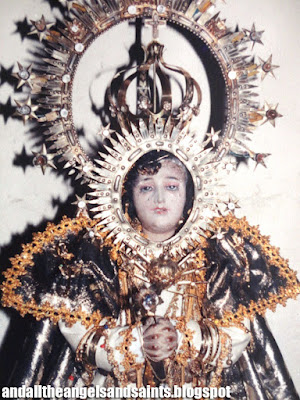 Some of the old folks of the town gathered on the shore were about to begin their traditional devotions to Our Lady. As they sang the words of the “Turumba” (a song and dance tribute that often results in people “trembling and falling down in great joy) , the image became light enough to be carried in procession. The people enshrined the image in the church and called it ‘Our Lady of Turumba’ . 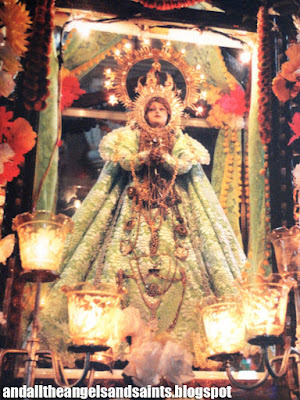 Every year, on the third day after Easter, the faithful honor her with seven consecutive novenas. The image stands 85 cms high,with its face and hands made of ivory. It depicts Our Lady of Sorrows, showing her heart pierced with seven swords and a golden handkerchief in her hand. She is clothed in rich silk material with rhinestones, and she wears a blue mantle, a gold bracelet and a golden crown. 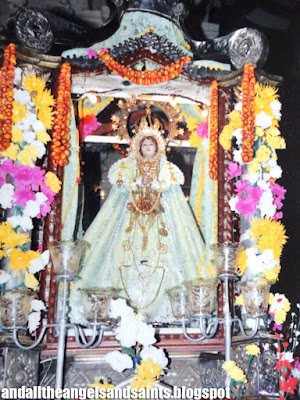 
Article reprinted from  “2nd Marian Congress Philippines Souvenir Program, 1954.
NOTE:  The image is actually made of wood, not ivory head and hands, as the original article reported.
Posted by Alex D.R. Castro at 3:44 PM 2 comments: 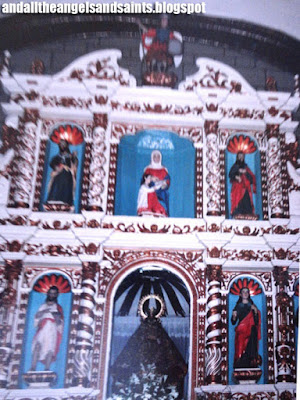 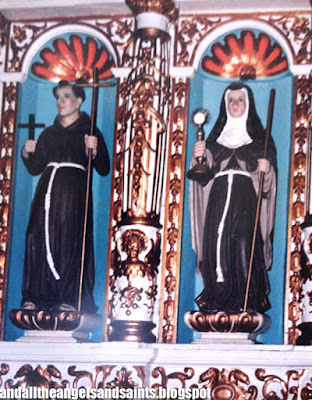 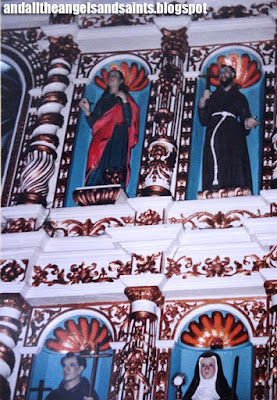 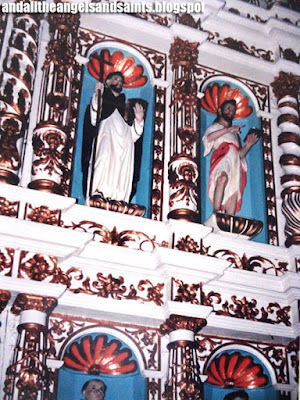 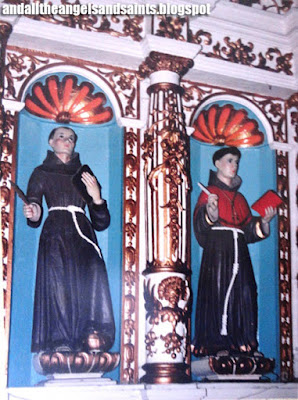