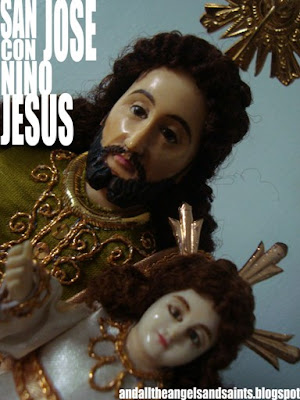 An antique dealer in Padre Faura sent me this cellphone photo of two ivory-faced santos for my consideration. I was drawn, of course, to the San Jose, which, despite being just a mask and without hands and base (it had been put on an old polychromed base) showed some promise to me. The clincher, of course, was the price, which was more than reasonable—surprising for a shop that is known to have pricey stuffs. 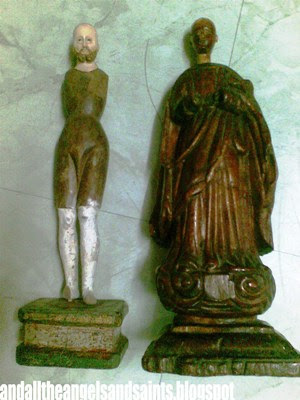 I was already happy with my San Jose find, intending to have it restored. On my way out, I casually asked him to be on the look-out for a small ivory Niño. To my delight, he brought out another santo fragment—a small ivory Niño head that was set on a new, grotesquely chubby wooden body. 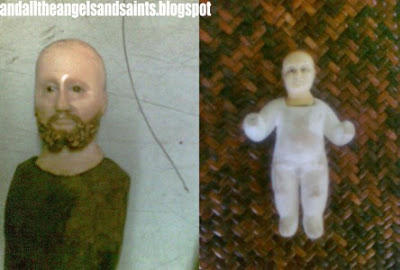 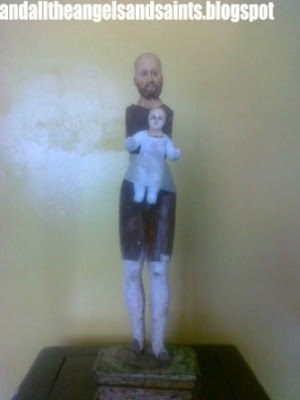 Immediately, I had an idea—what if I can have this San Jose assembled with a Christ Child instead? I checked the proportions and the two ivory faces were a match! For just a few thousands more, I went out of the shop with both a San Jose and a Niño Jesus! 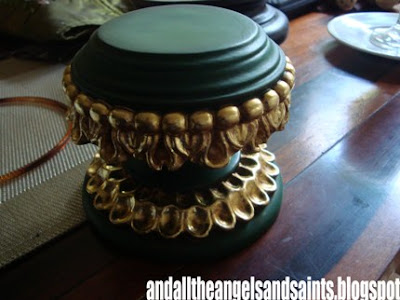 To Dr. Raffy Lopez, I did go next, of course, the santo restorer who had been helping me fix my broken santos for years now. I brought with him an unpainted antique base which I had kept in my baul, and Raffy immediately sent this to one of his contractors for painting and gilding. 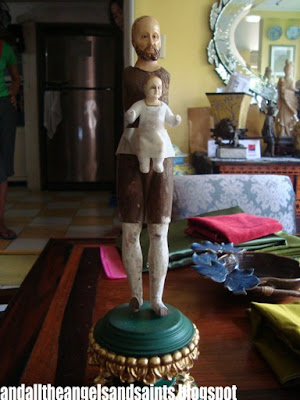 When he set the San Jose and the Niño on the repaired base—the two looked comfortable up there! The San Jose body quickly underwent restoration—new ivory hands were carved and set on wire armature arms. The Niño’s body was whittled down to its proper size. Meanwhile, work began on the vestments. We decided on an olive green color for the robe and a light brown colored cape for San Jose. The design drew inspiration from gothic lines. 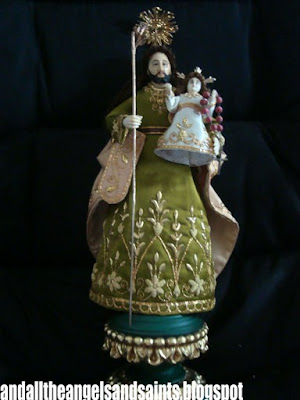 As always, wigs and metalworks (halo, potencias and flowered staff) were ordered from the workshop of Dodong Azares. Just a few weeks later, the assembly was complete and the amazing results are shown on this page. 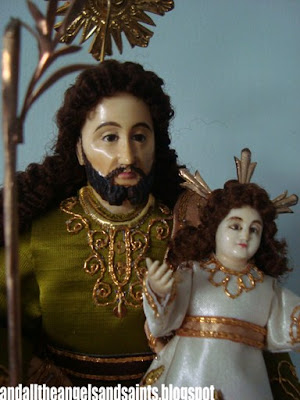 My San Jose and Niño Jesus are now encased in a hurricane glass shade (locally called “coca cola virina”) that I found separately in another shop, with a replaced base and topper. 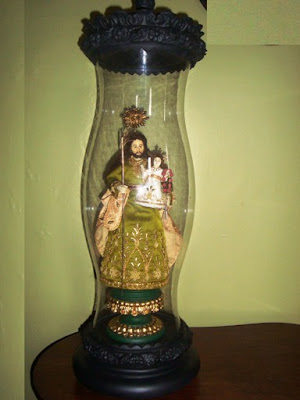 I am glad I bought these santos, and even happier that I had them restored and preserved, and they are proofs that everything—and that includes even damaged, cheap, and seemingly ugly santos--have divine possibilities. 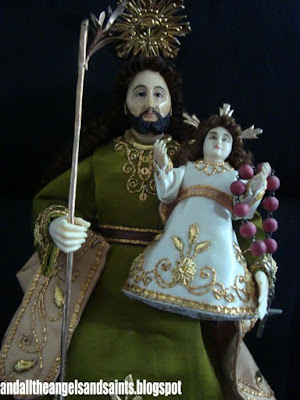 Images of saints were not only captured by Philippine artisans in 3-dimensional carved figures, but were also replicated in bas-reliefs on wood panels. Called “retablos”, these wooden works, often beautifully polychromed and showing multiple characters, Biblical events or episodes from a saint’s life were often hanged on church walls, although smaller ones were made for private devotion. Retablos represent some of the earliest examples of religious woodworks done in the islands during the colonial period. 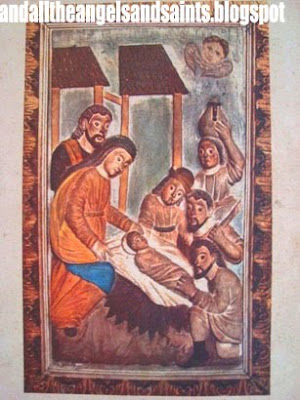 ADORATION OF THE SHEPHERDS
From the church of Candaba, Pampanga, this 17th century retablo form part of a series of Nativity scenes rendered in polychromed molave wood. Luis Araneta Collection. 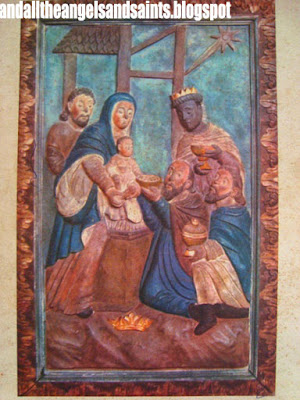 ADORATION OF THE MAGI
This retablo, evidently done by the same craftsman, is done with a more polished effort. The colors are more exciting and vivid and the similarity in the expression of the characters are peculiarities of images from Pampanga. Luis Araneta Collection. 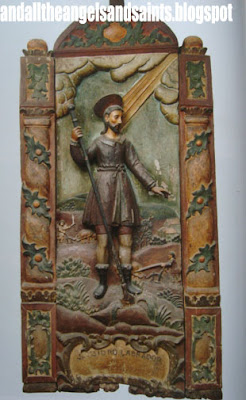 SAN ISIDRO LABRADOR
St. Isidore, a popular saint figure in the Philippines, is invoked for good harvest by local farmers. This piece, from Bicol, is made from polychromed painted wood and dates from 1792. Richard and Sandra Lopez Collection. 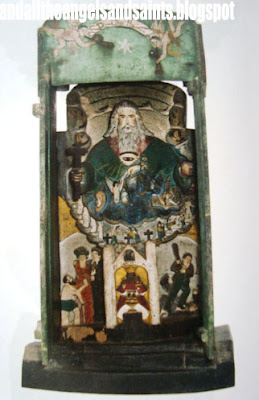 GOD, ALMIGHTY FATHER
A quaint depiction of the all-knowing, all-seeing and patient God the Father surrounded by allegorical figures, including a white angels and a black devil weighing the souls of the dead. We see a just man giving alms and a sinner beating a victim with a club. Early 20th c., Paulino and Hetty Que Collection. 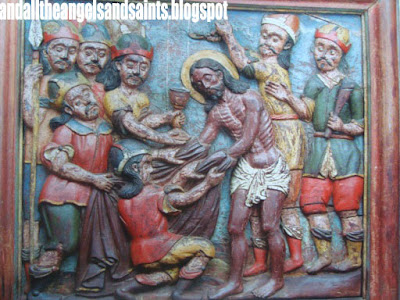 10TH STATION OF THE CROSS
This particular station, “Jesus Is Stripped Of His Garments”, is no longer included in the new Stations of the Cross approved by Pope Benedict in 2007. Polychromed wood, 17th c., Narva Church, Camarines Sur. Paulino and Hetty Que Collection. 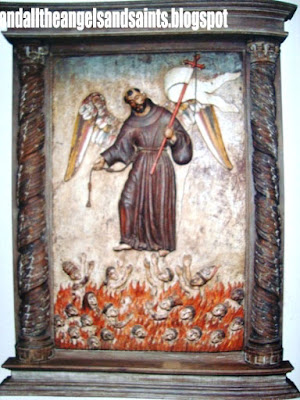 SAN FRANCISCO DE ASIS
St. Francisco of Assisi, founder of the Order of Friars Minor (Franciscans) is shown offering salvation to humanity by dangling his girdle of rope to people including religious figures wallowing in a fiery lake. Carved from a single slab of wood, it dates from 18th c. and comes from Ligao Church, Albay.
Posted by Alex D.R. Castro at 3:01 AM 4 comments:

75. ALL-SAINTS: From the Workshop of Dr. Raffy Lopez

A sampling of completed santos from the workshop ofDr. Raffy Lopez, the Philippines' leading ecclesiastical artist and vestment maker. Dr. Lopez restores old ivories as well as antique wooden statuaries. He can also create new ones, ivories being his specialties--from tabletop sizes to processional images. 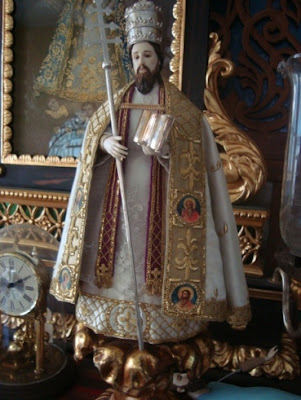 SAN PIO QUINTO (Pope Pius V)
St. Pope Pius V, (or Michele Ghislieri)was Pope from 1566 to 1572 . He is notable for his role in the Council of Trent, the Counter-Reformation, and the standardization of the Roman liturgy within the Latin Church. Feast Day: April 30 SAN PEDRO APOSTOL
A restored antique piece, St. Peter is shown with his attribute--a rooster--in reference to the Biblical account where the cock crowed thrice after Peter's betrayal of Christ. Feast Day: June 29 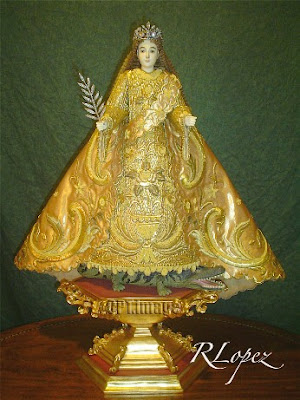 STA. MARTA
An ivory image made after the likeness of the Santa Marta image of Pateros, which shows the saint holding a palm leaf and standing on top of a crocodile, instead of a dragon. Feast Day: July 29 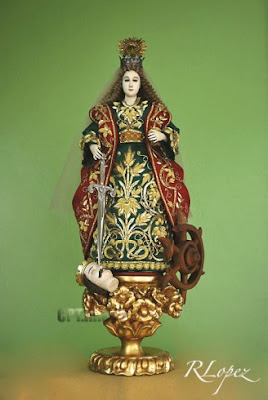 STA. CATALINA DE ALEJANDRIA
St. Catherine of Alexandria wields her attribute--the sword--which she used to cut the head of Emperor Maxentius, shown underfoot. Her other emblem, the spiked wheel, or now known as the Catherine wheel, is by her side, the instrument of her martyrdom. Feast Day: November 25 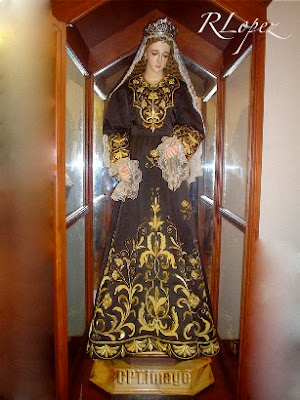 STA. JUANA DE CUZA
This not-so-known saint, St. Joanna of Chuza, was a woman of affluence who gave financial support to Jesus Christ and was also present when His empty tomb was discovered. She was the wife of Chuza, the steward of Herod Antipas. This is a wooden processional saint. Feast Day: May 24 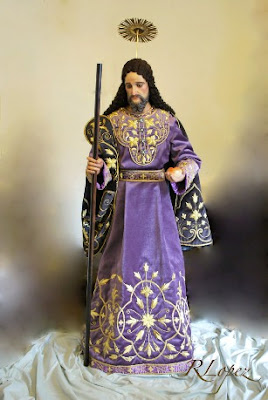 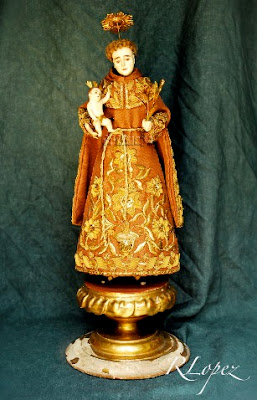 SAN ANTONIO DE PADUA
A restored ivory likeness of St. Anthony of Padua in his traditional brown habit, holding the Christ Child, and some stems of lilies, to signify his purity. He is one of the Doctors of the Church. Feast Day: June 13
Posted by Alex D.R. Castro at 4:39 PM 1 comment: