242. IN THE COMPANY OF SPIRITS


By Alya B. Honasan
yOriginally published in the Artwatch section of OPINION Weekend (OW) Magazine.


How did a playwright, writer and director turned his passion into a fulfilling profession?
With the blessings of his ‘children.’

Does Floy Quintos tell if a particular bulol or santo, a prime piece of tribal or colonial art, is a good one? “Very Buddhist,” he says in all sincerity.”It’s in the eyes. They should be looking at you, but at the same time,seem like they’re looking beyond you or something deep inside you.”

The award-winning playwright , writer and director is a firm believer in the life force that lives within such cultural antiquities, a force that influences the decisions of this brand new entrepreneur. “It’s this little spirit, a spark of life. It’s the spirituality of the carver and a reflection of how ingrained such spirituality in their lifestyle. You can own a fake, but it doesn’t look at you in the right way.” 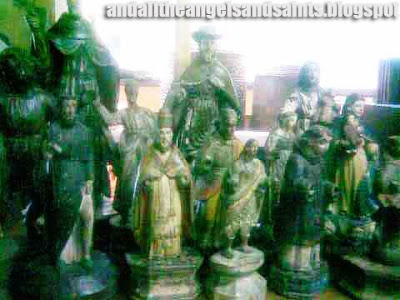 Such a primal sensitivity and a collector’s instinct has helped Quintos amass a formidable trove of tribal and colonial sculpture, textiles and adornments—“small and big things, all authentic”—which he began putting together at the age of 12 when he purchased his first P5.00 santo from a shop in Mabini. “I don’t know why I like them." It was probably just a response to something in his soul.

Those were the years when there was still really great stuff in Manila, when walking into an antique shop was an adventure.” Quintos remembers “making connections with mountain people’ on treks to Sagada, Baguio and Banawe—“something I can’t quite do anymore at 41.” He laughs. “Me? Walk in the fields with a camote stick?” 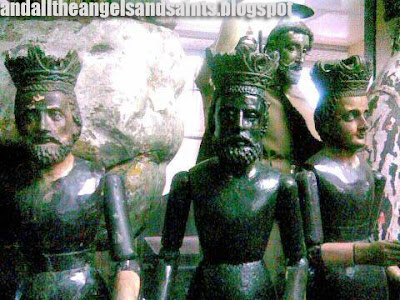 Today, the same folks still look him up in Manila when there’s merchandise for sale, and after having learned his slessos buying the ocassional “mega-dud” and reading up on the subject, Quintos has become a discriminating collector who knows what he wants. Friends have long bugged him to open his own shop. Then, serendipitously, Willie Versoza, owner of the pioneering antique shop Likha and a friend of Quintos, announced he was closing shop after the death of his partner, Jean Louis Levi.

Quintos had been doing some thinking. “I realized I had also amassed so much, and I was wondering, am I hoping to be collecting forever?” The rent was good, the building was owned by a friend, and Quintos, while working constantly in the commercial circuit , was looking for something to revive his weary soul. “I figured this was the career break I’ve been looking for.” 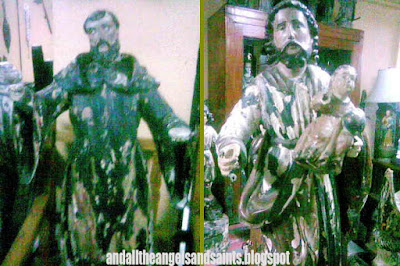 Thus, one month ago, the orange façade and the olive green interiors of Gallery Deus welcomed the public. It was named after the Latin word for “God” which Quintos has always liked for the reference to “the spirit in all of us”.

He was between projects, fresh from directing Ai-Ai del las Alas’ West Coast concerts and on the way to Phuket to direct a TV show, with just one Sunday to spare.He fixed the shop and made the leap from collector to dealer in one day—a move that was a lot tougher than it seems. “I learned to be not so acquisitive.” Quintos laughs.”I painted the shops, put in the shelves, but I kept procrastinating about the actual move and choosing which ones of my children to put on sale. I’ve kept exactly 6 bulols and 5 santos.” 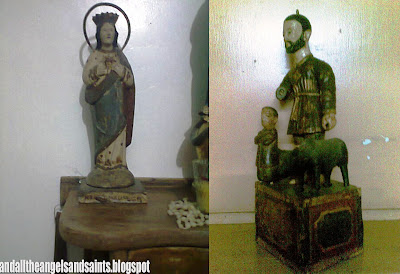 Quintos is at his shop from 10 a.m. to 7 p.m. when he isn’t doing a show. He is having a field day treating his windows like production numbers. “This week, it’s called the beheading of John the Baptist; next week will be “Horsey-Horsey, Tigidig-tigidig!”

Seriously,Quintos adds,”I never thought I could do business. Now I’m able to compute, and I guess, like most dealers who love their stuff and don’t look at it as just merchandise, I love to make chika the customers.” 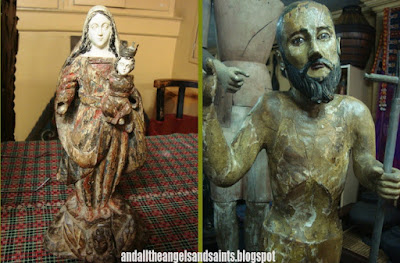 Consistent with his attitude, he doesn’t hard-sell the items. If a sale doesn’t push though though, Quintos assumes that the piece simply “doesn’t want to go just yet.” As a collector, Quintos is glad that Filipinos are becoming more educated buyers of tribal art, even as the levels of scholarships and appreciation are iconically still higher abroad. “It’s the foreigners who know what’s good and what’s special.”

On the personal front. Quintos has beenmore discriminating in choosing projects and is making more time to sit back, gain perspective—and write.”I’ve got about 5 plays inside me that need to see the light, and this kind of work is giving me the time and the inspiration..” With a little help from his friends, of course.
Posted by Alex D.R. Castro at 8:20 PM 2 comments:


The ancient town of Angono, which had its beginnings in 1575,  is famous for its resident artists (Botong Francisco, the Blancos), colorful Gigantes Festival and caves with mysterious petroglyphs. But it is also known for its patron—San Clemente--whose unique, half-body image can be found enshrined in the church located at Poblacion Ibaba.

A legend has it that the image of the pope saint was fished out of Laguna de Bay by  fisherman Justino Villaluz a long time ago. His net caught something heavy as he was fishing for kanduli (catfish), and when he hauled it back to the boat, he was surprised to see a portion of a log caught in the net. 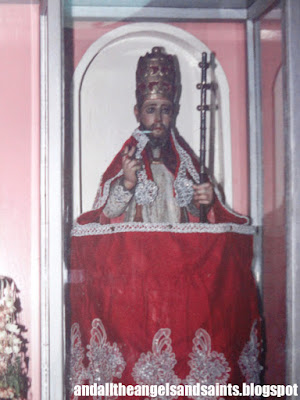 But greater was his awe when he saw, upon closer inspection, that the log was actually a carved bust of a man with a crown—the image of the papal saint of Rome, San Clemente. Because the lower half of the body was presumed missing, it earned the monicker San Clemente Putol (or San Clementeng Matanda). It was only later that Villaluz  learned that the figure was actually carved that way, representing the saint preaching while in a pulpit, which hid the lower part of his body. 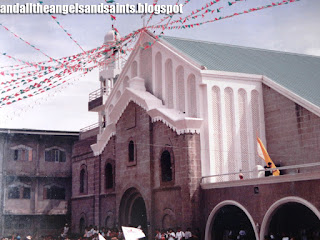 From the home of the Villaluzes, the image of San Clemente was taken to the town’s first church on a hill in Biga, constructed in 1751, which had already been dedicated to San Isidro Labrador. A second church at Ibaba was finished in 1854, and it was here that San Clemente was enthroned, amidst protests from Biga townsfolk who laid claim to the image. Hacenderos pacified the displeased residents. 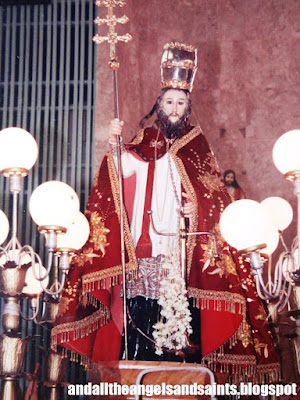 Eventually, a full-bodied replica was made of San Clemente, which is the image brought out for Angono’s colorful and raucous fiesta, held on the saint’s birthday, November 23 ( a second thanksgiving fiesta held every February has long been discontinued).  To differentiate the two San Clementes, the older, half-bodied version is also known today as San Clementeng Matanda. 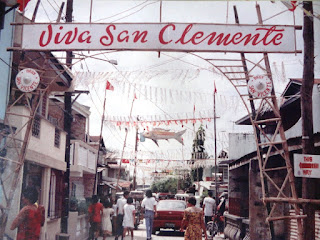 The fiesta is capped with a procession of ‘gigantes’—giant, paper mache figural creations, representing popular characters—including San Clemente and his family. This Higantes Festival has become inextricably associated with Angono—along with San Clemente who seemingly chose the town himself to be the seat of his papal mission in the Philippines.

WATCH A VIDEO OF THE 2008 HIGANTES FESTIVAL
OF ANGONO HERE:

The Life of San Clemente
San Clemente (or St. Clement of Rome) was the Christian world’s 4th pope. His time was marked with persecutions against Christians, resulting in his deportation to Crimea.There, he ministered among Christian slaves who were forced to work in barren salt mines.  Upon imploring God’s mercy for the slaves, pure, clean water inexplicably flowed from the stones—a miracle that converted many Crimeans.

As a result, Emperor Trajan had St. Clement arrested and put to death. An anchor was tied to his neck and thrown into the Crimean Sea. But angels appeared to retrieve the body of the martyr pope from the sea, which miraculously floated already in a marble tomb, along with his anchor. He died in c. 98. 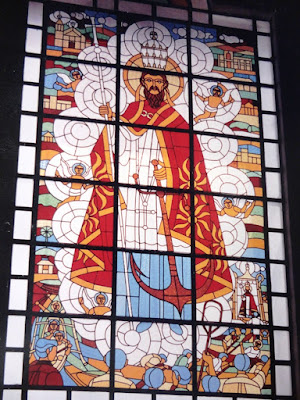 Iconography and Emblems
The papal saint is represented arrayed in papal vestments, wearing a papal tiara, or more often, a mitre. Emblems and attributes include an anchor on his side, palm of martyrdom, papal staff, keys to heaven (symbols of his papacy).

Various Religious Beliefs and Practices in the Philippines, Vol. 1.

Pasay is home to the Sta. Clara Parish Church,--a landmark on P. Burgos St., which was founded in 1864. Installed as the first parish priest was Fray Simeon Betino, OSA, who served for 4 years.

The parish is under the patronage of Sta. Clara, who was born in Montefalco around 1268. Sta. Clara joined the convent of Franciscan tertiaries which founded the Holy Cross Convent at Montefalco in 1290. She rose to become the abbess of the community.

Known for living a very austere life, Sta. Clara had a profound devotion to the Passion of Christ and His Cross. When Clare died in 1308, an image of the Cross was found imprinted on her heart, and her body remained incorrupt. She was canonized in 1881 by Pope Leo XIII.

The age-old image of Sta. Clara enshrined in the Pasay Church shows the holy woman dressed in her habit, holding her attributes—the cross, in reference to her devotion, and the balance scale—used for weighing or judging the goodness of souls against the word of God.

On her Aug. 17 fiesta, the image of Sta. Clara is paraded, accompanied by rousing  music performed by different invited bands,in a celebration so festive, befitting the saint who continues to be a source of inspiration to the faithful of Pasay. 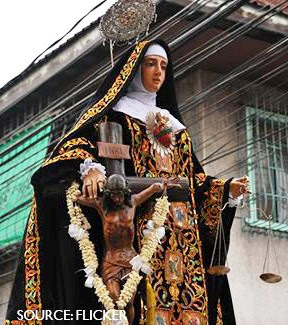