94. RETRO-SANTO: San Jose of the Church of the Recoletos, Intramuros 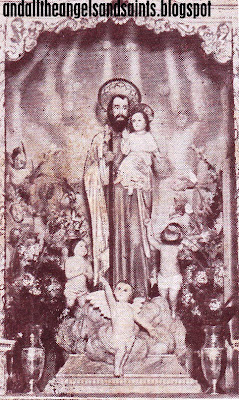 The Church of the Augustinian Recollects in Intramuros was dedicated to their patron, San Nicolas Tolentino. The church with its cobbled patio, known as Iglesia de San Nicolas, was located near northern Muralla, almost at the end of Cabildo St., the least visible of the Intramuros churches. The Recoleto church was also an important shrine to San Jose, and throughout the year, several celebrations were held in his honor. There was a March devotion to the saint, and from November 18-26, the Recoletos came up with their biggest fiesta of the year, the solemnity of San Jose, highlighted with a pageant to honor the nuptials of Mary and Joseph.

This beautiful San Jose statue, showing the saint holding the Child Jesus on a base adorned with angels, occupied one of the many rococo altars that lined both sides of the Recoleto church. Regular masses were dedicated to the saint every Wednesday at 6:30 pm. These altars were removed to make the nave bigger during the renovation of the church for the 1937 International Eucharistic Congress held in Manila, the first in Asia.

The Iglesia de San Nicolas was host to some of the most beautiful santos that were the centers of many Recoleto celebrations. There was an old black image of Nstra. Sñra de Salud (Our Lady of Health) to which pregnant women prayed. Prewar Recoletos had gloried in having the oldest Nazareno image of the Philippines, which had a cult of Friday pilgrimages, just like the Quiapo Nazarene. The feasts of San Nicolas and Sta. Lucia were also celebrated with processions in September and December, respectively.

All these santos disappeared—some through assiduous renovations like the Salud Virgin—but mostly when Intramuros was bombed and razed during the second World War. Majority of the stately churches—including the Recoleto Church—were destroyed in this destructive episode of Philippine history. Only this pre-War ‘recuerdo del Solemne Novenario de San Jose’, salvaged from a thrift shop, is a reminder of the glory that once was Intramuros. Manila’s walled city and home to the most magnificent Spanish colonial churches in the islands. 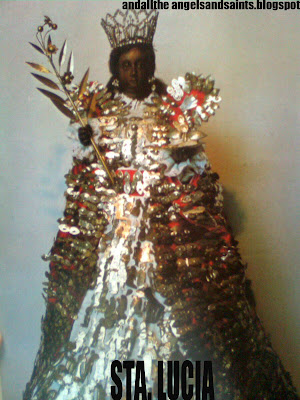 In the town of Sta. Lucia of Ilocos Sur, one can find an ancient santa figure around which the devotion of millions of God-fearing Ilocanos have revolved over the last centuries. It is that of the small figure of the town’s pintakasi—Santa Lucia—“Apo Baket” as she is fondly addressed, ‘grandmother’ in Ilocano, a term of endearment for someone who has never failed to listen to supplications for miracles and simple requests.

Dumanguake was the name of present-day Santa Lucia when Captain Juan de Salcedo landed there on the way to North Luzon. The Spaniards enslaved the Bag-o natives and made them work without compensation.

One day, while the Spaniards were punishing some disobedient natives, a group of men grouped themselves because they resented the harsh treatment of the Spanish. A fight ensued and the natives wanted to side with the Spanish. Suddenly an old woman stood in front of them. When they asked her name, she uttered "Lucia." After uttering her name, she disappeared. Seeing this, the Spaniards and the natives agreed to build a church on the site of the apparition, and dedicated it to Santa Lucia--whose name eventually became the name of the new town 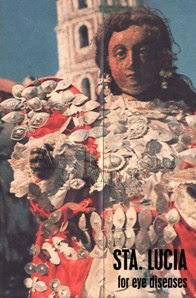 The small image of Sta. Lucia is based on the Sicilian martyr, Lucy, whose eyes were gouged out by her torturers but which were miraculously restored. Hence, she is invoked against afflictions of the eye. The antique wooden image was brought by Augustinian friars to the Philippines, but it is not known if this was the same image brought to the mission of Sta. Lucia, established in 1586. Oldtimers would only say that the image had been there since their grandparents’ time. Another image of Sta. Lucia—this one with ivory head and hands--- was stolen years’ back, but luckily, the perpetrators ignored the wooden image which many people believe to be ‘milagrosa’. 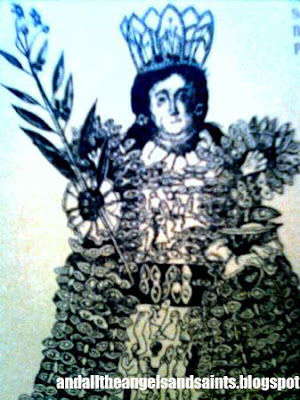 Sta. Lucia has a delicately carved face, now darkened with age. It is outfitted with glass eyes and human hair wig. On her garment are pinned hundreds of silver ‘ex-votos’ –votive offerings on the shape of eyes, lung, heart, legs and other limbs---which represent the body parts healed by the saints. Her vestments are full to overflowing—a powerful testament to her miraculous power—so much so that the parish priest had to transfer thousands more of the ex-votos on a banner. The offerings also are known to possess curative powers; pious devotees would often rub these silver offerings on their eyes.

The saint is not just sought out for cures but also when crops fail or when rains refused to fall. Peasants and townsfolk bring Sta. Lucia out and procession her in the fields so that she would bring back a bountiful harvest to the town who has grown to love and safeguard her with their lives.
Posted by Alex D.R. Castro at 10:40 PM No comments: