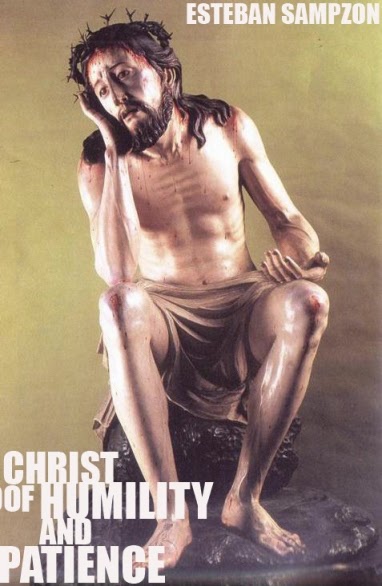 Esteban Sampzon (fl. 1773-1800) is perhaps, the earliest Overseas Filipino religious sculptor who found work in Argentina, South America in the late 1700s, as documented by the Spanish art historian, Enrique Marcon Dorta. A birth record under his name exists in the parish of San Bartolome in Malabon.

Virtually nothing is known of his early life in the Philippines, or whether he received his artistic training there. Most likely, Sampzon reached Spanish America via the Manila Galleon or Brazil. He was already known making a living as a carver n Buenos Aires in 1773, when he was recorded living in a monastery in Santo Domingo.

Specializing in extremely naturalistic sculptures of saints characterized by a powerful sense of emotion, Sampzon became one of the leading sculptors of the Viceroyalty of Rio de la Plata. In 1778, he identified himself as “escultor de profesion y de condicion indio de la China”. He was already married to one Bernardina Hidalgo when he moved to Cordoba between 1787 and 1807, after receiving commissions from the Dominicans.

In 1788, he was involved in a lawsuit after an injury. This resulted in his arrest on orders from Mayor Francisco Antonio González of Cordoba, and a trial ensued before the Royal Audiencia. Sampzon won his case and received financial compensation. After all, he was highly regarded as a creator of sacred images for the Church .

The rest of his life were spent between the cities of Cordoba and Buenos Aires. Blindness and disease took their toll on this gifted Filipino artisan; he sold some of his property and settled in Buenos Aires, where he died circa 1830.

Sampzon’s style reflects that of the iconographic tradition of Spanish Juan Martinez Montanes and other Baroque masters. His works are described as imbued “with a certain calmness and rhythmic facial treatment”, typical of Chinese-Filipino talleres of the seventeenth century. His realistic anatomical treatment of figures were also noted. 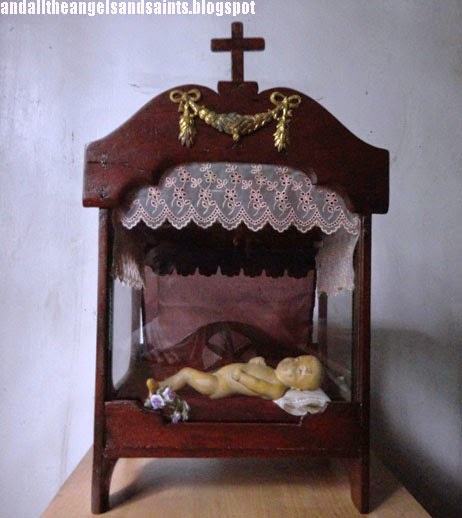 As a collector, I don’t only collect what I like. I also collect because I see possibilities in many things—whether they be tattered, old, or missing a piece. Therein lies my problem—in my house, I have many odds and ends in various stages of decay, but which I never throw away. My instinct often tells me that these once-loved objects can be a. restored b. salvaged c. re-loved d. adapted for re-use. Which often leads to challenging projects like this Belen project which took about half a year to complete. 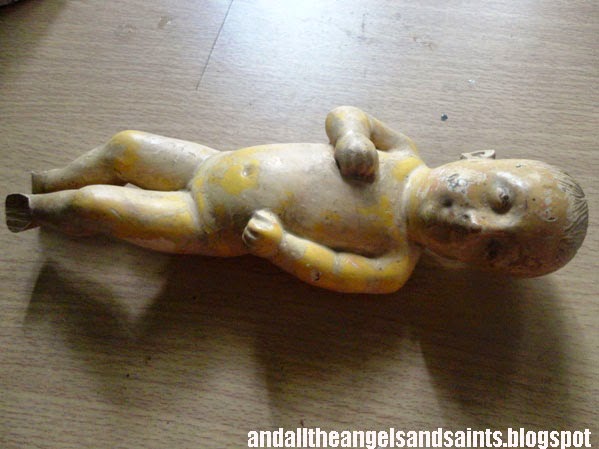 It started with an old wooden sleeping Niño that I found in a provincial antique shop. It was not exactly an impressive piece—it had been thrown in for a song, together with a large San Antonio I had purchased separately. Nothing remarkable about its carving . In fact, it even had a chipped foot. 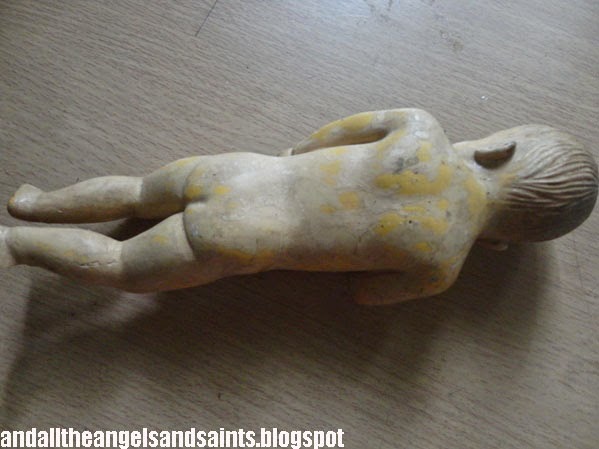 But sleeping Niños are always hard to come by—be they expensive ivory or plain wood. So, I took it home, repaired its foot (using epoxy clay) and set it aside—in an old urna shared with its original occupant, a bigger sleeping Niño. 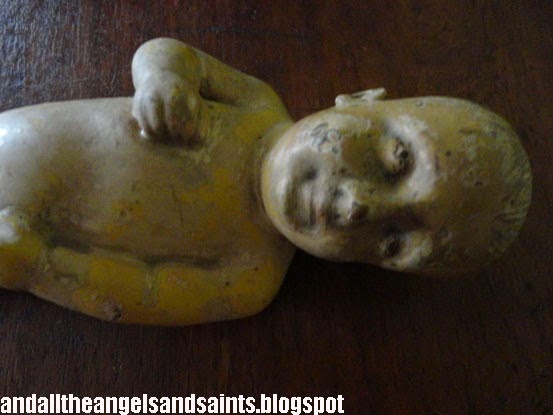 So for months, there it lay—until one day, I saw an unusually small wooden structure in another antique shop I frequent. It was topped with a cross, so I assumed its an old altar, but it has such an intriguing design—there are no indications if the open parts were covered in glass, no doors, no hinges. It had a sort of a headboard with a circular flower cut-out, a motif I have seen on old bauls and comodas. The top also had a carved leaf-like appliqué which looked askew. Could this be a miniature toy furniture? Or a mini-urna? 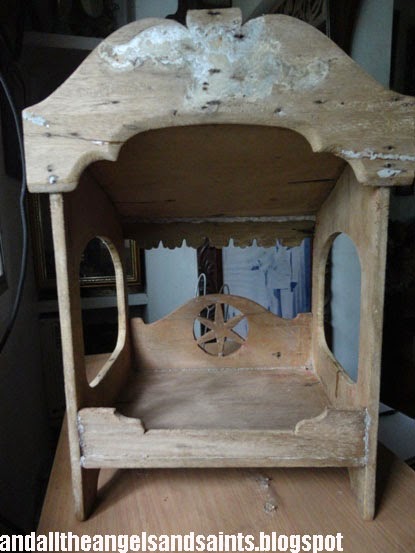 Anyway, I took it home and envisioned a wooden casing for my homeless wooden Niño. The first thing I did was to strip off the layers of greenish paint that have accumulated as a pasty muck on the wooden surfaces. I decided to remove the carved wooden trim too. 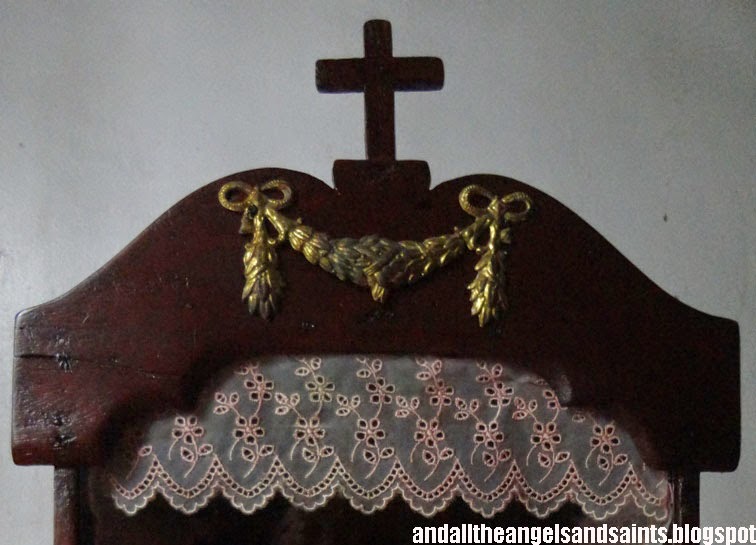 After I filled in some holes and other imperfections, I sent it to my frame-maker for a quick week-end paint job. Then, I had the 3 open sides outfitted with glass panes, using the same rubber glue for installing windows. The back, which had the “headboard”, was left open (I put a small curtain to cover it, instead.) 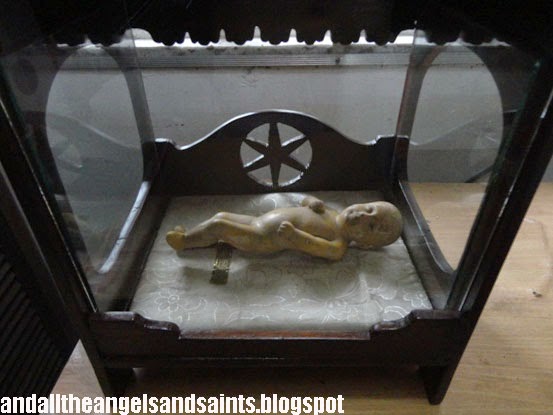 As the “pediment” looked bare without the carved trimming, I checked my stock of “collectible junk” and found an old brass ribbon trim, that I neatly tacked on top. I used vintage lace to decorate the front and the sides of the altar, then sewed a velvet cushion pad and a pillow for the Niño. 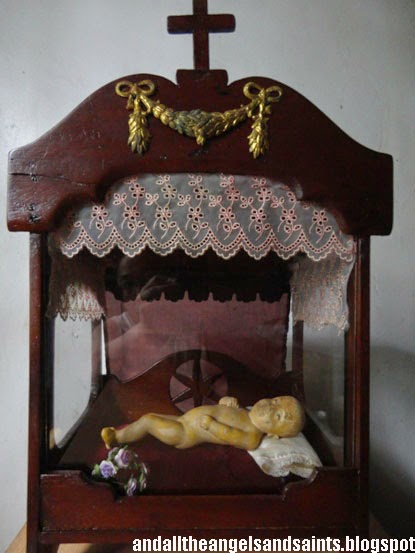 Maybe I’ll decorate it with some mother-of-pearl flowers when I find the time, but for now, I consider my Babe ‘n Belen Project completed---just in time for Chirstmas!! 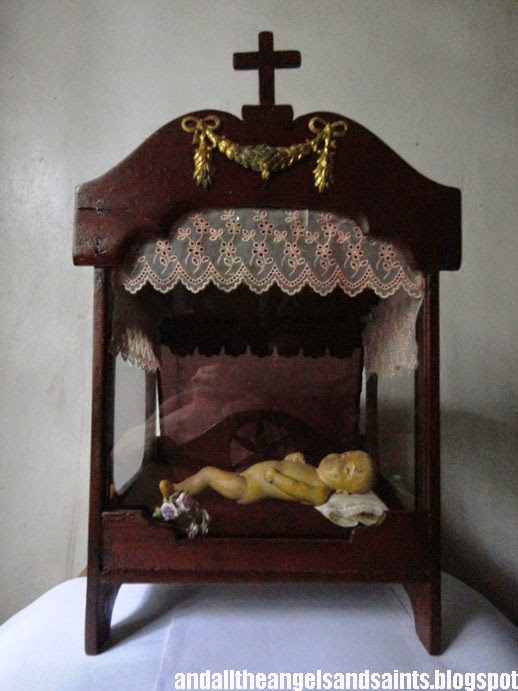