245. AN ENTOURAGE OF AGOO'S SORROWFUL SANTAS 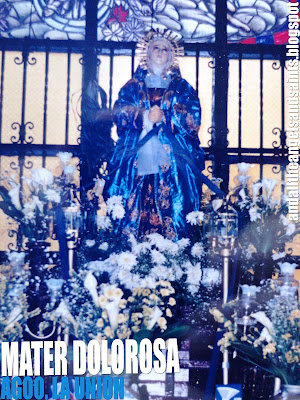 Agoo, before the founding of La Union province, was once a part of Pangasinan. It is one of the oldest municipalities in the Philippines, and in ancient time, its excellent harbor was frequently visited by Japanese and Chinese traders. Christianization was undertaken by both Franciscan and Augustinian missionaries, until secular priests took over in 1898. 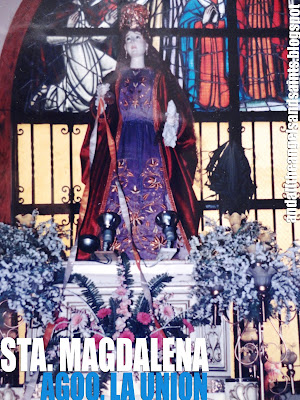 Agoo has been made famous for the alleged Marian apparitions of Virgin Mary to Judiel Nieva, who reported seeing a statue of Our Lady of Agoo atop a Guava tree, weeping with blood. Pilgrims flocked to Agoo to see the "seer", but the highly sensationalized apparitions were declared a hoax in 1993. 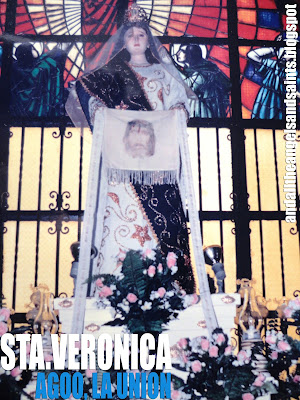 But nothing can take way the display of deep Ilocano devoutness and traditional pomp during the season of Lent.. The Good Friday procession is the highlight of the Semana Santa, a devotion manifesting the fervor and faith of the hardy Agoo folks. 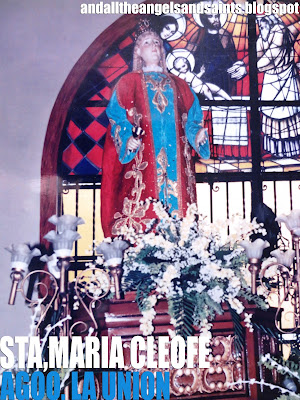 There are about 30 carozas beautifully adorned, all lined up at the Plaza dela Virgen, a remarkable tradition dating from the Spanish times and the Penitential Procession of Women in honor of the Mother of Christ, all dressed in black. 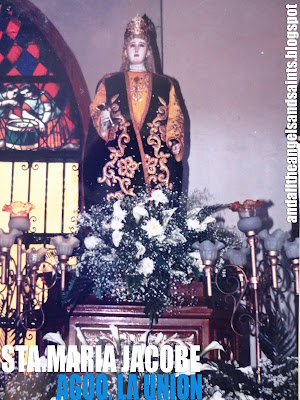 The funeral entourage also consists of mourning virgins--saintly women depicting the female characters associated with the ministry and  Passion of Jesus, a selection of which are featured on this page. 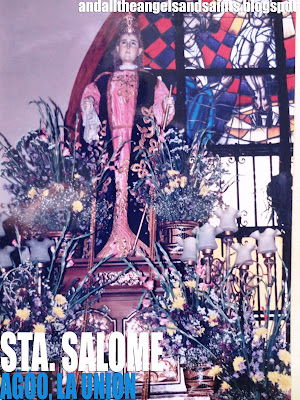 All photos were taken in 1994 by Dr. Raymund Feliciano, exclusively for this blog. 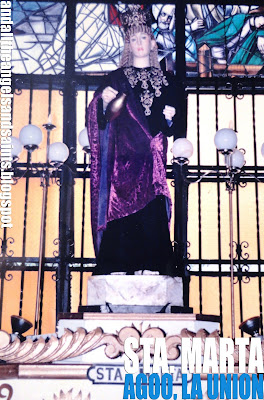 
The origin of this 7 ft. black Nazarene nailed to a cross is shrouded in mystery; for as long as oldtimers remember, it has always been revered in the town, installed in a barrio chapel of Sto. Cristo since the Spanish time. The chapel was burned down duing the Peacetime era, and so “Apo Señor”, as he came to be known by the townsfolk, was transferred to the main Parish Church. 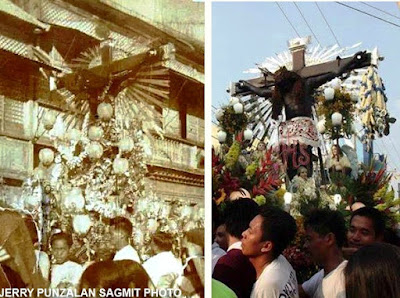 Every 23rd of April, the "Dakit ning Apung Señor" ritual happens, in which the Crucifix is fetched from the church complete with a marching band, for enshrinement in the chapel, where it is processioned in time for the May fiesta. 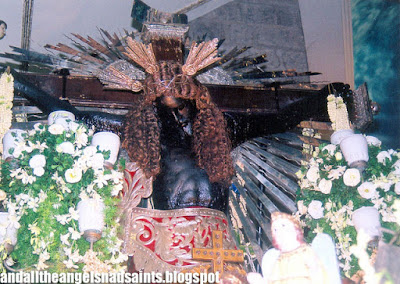 243. STA. MARIA MAGDALENA OF KAWIT : Patroness of the Revolution

The town of Kawit in Cavite is one of the country’s cradles of history, a town linked inseparably with Aguinaldo and the Philippine Revolution. Kawit is also home to a revered image of the repentant sinner-saint, Sta. Maria Magdalena, under whose patronage the town has been placed over 300 years ago, during the term of Manila Archbishop Miguel Garcia Serrano (1618-1629). The revered image of Sta. Maria is enshrined in her own altar at the age-old baroque Kawit Church, known as the Church of St. Mary Magdalene. 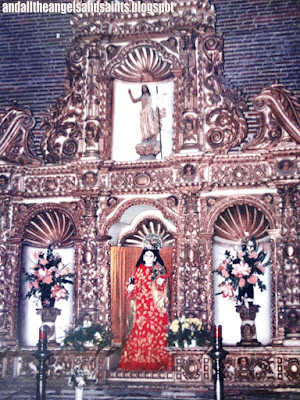 Over the years, devotion to the saint has become so widespread throughout the region and its most well-known devotee is no less than General Emilio Famy Aguinaldo, first president of the Philippine Republic. The Kawit-born revolutionary leader would ask for her protection every time he would venture out, and his safe delivery would always be attributed to the workings of the santa. Aguinaldo would even name his factionist movement after his patroness— "Magdalo". It is nowonder that Sta.Maria Magdalena has also earned the unofficial title as the “Patron Saint of the Philippine Revolution.”

The antique life-size image of Sta, Maria is of wood, carved in the round, including her hair and vestment drapings, painted pink, orange and gold. However, like many de bulto images, she is outfitted with real clothes—usually, a gold-embroidered red gown, matched with a golden yellow cape. Be-wigged and shod in silver shoes, the saint holds her iconographic attributes—a perfume jar on her right hand and a crucifix on the other. 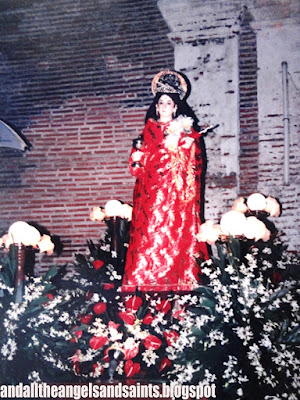 There is a characteristic mark on her forehead, which others refer to as a mole (“nunal”) but it has been speculated that it is the symbolic mark left by Jesus's fingertip when He gently admonished her to “ touch me not” during their encounter three days after His death.

Devotion to Sta. Maria Magdalena is year-round, but it reaches its peak during her July 21 feast days. On the eve of the fiesta, at 7 in the morning, the caracol tradition of bringing the image out in her flower-trimmed anda to make the rounds of the town begins. The anda bearers and the thousands of pilgrim-followers dance their way from Binakayan to Alapan, while prayers are said and favors are requested. Fandango is the traditional dance step used to convey the image from town to town. 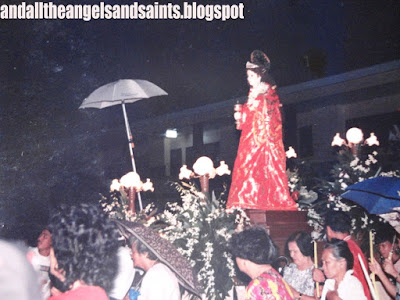 The santa is also brought on a riverine procession on a “casco” to bless the waters of Cavite and make them more bountiful.

On the fiesta day itself—July 22—a grand procession is held on the main streets of Kawit. The 7:00 pm. procession is led by light-bearing youngsters followed by the lavishly-decorated carozza of Sta. Maria Magdalena, and a retinue of townsfolk. Groups of devotees called “Maginoos” and “Ginangs” dressed in their finery are at the tail-end. The parade ends at 10 p.m. and is capped with a feast-for-all sponsored by the Hermanos and Hermanas of the fiesta. 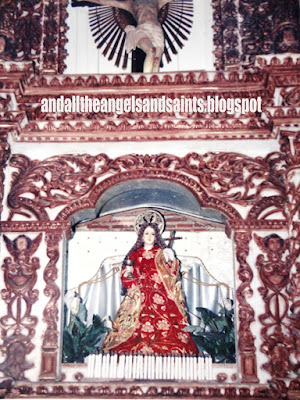 The fiesta revelry continues at the church patio where carnival rides, games and sideshows provide added enjoyment to the people of Kawit whose devotion to theis Sta. Maria Magdalena knows no bound, through periods of strife, struggle and present-day prosperity.

ALL PHOTOS from DR. RAYMUND FELICIANO COLLECTION
Posted by Alex D.R. Castro at 3:44 PM No comments: