I have previously written about Bangkal in Makati—that little barangay near South Super Highway that has earned the reputation as Manila’s foremost garage sale community. Its main street, Evangelista, is lined with side streets filled with shops—more accurately, converted apartment garages—that offer a wild assortment of used goods, a mix of American and local items from furniture, clothes to house décor, serviceable and damaged, threadbare and slightly used, and if you’re lucky, vintage and antiques!!

In the last two years, I have scored a couple of santos from Bangkal, which may not be of comparable quality with those real antique shops in Ermita, but which nevertheless, are genuine antiques. Most santos I have found are of the folk variety, and though most have missing parts like most antique santos, they pose a lot of restoration challenges to me. Most important of all is their affordability—I have paid no more than Php 4,000 for these antique pieces, with a typical item averaging about 2K each.


Last year, in one of the shops, I saw this small bonehead santo representing the Virgin Mary. It is only about 8 inches tall, but is done in the style of Bohol polychromes santas, right down to the peana, which had crescent moon “horns” supported by a 4-sided base. The body has lost its paint and only a layer of dried up, colorless pigments remain.


The head itself is maybe of a fish bone, just about an inch high, with not much carved features as one can see. Being hollow, it had been stuck on a peg on the neck of the image.


As recent as a month ago, I chanced upon a small trove of folk santos in a second-hand shop. The proprietor tuned out to be a Kapampangan whose husband was once a dealer in Cebu. What remained of their store stock had now been transported to Bangkal, where I happily saw them first on one rainy afternoon visit there. I just had to get this well-made, and very colourful San Vicente Ferrer which probably date from the 60s or even 70s. Its tin wings and halo are intact, the enamel paint still vivid and bright. 2K is what I paid for it.


Actually, there were 3 San Vicentes available in the shop, and I chose the best-looking one. But I couldn’t resist the other nose-less image, which appealed to me mainly because of the folksy colors and the fact that it was carved from a solid piece of softwood. I am sure I could outfit this with a pair of tin wings. It was priced as the first one—2K.


Costing a bit more was this very heavy and complete tableau of a sword-wielding San Miguel fighting with the Devil who is shown caught underfoot. It is a vintage piece, possibly no more than 50 years old, but it is outstanding for its creative representation of the archangel all painted in house paint, and the Devil that had a bent nail for a tail. Set on a stoney mound on a block of wood, I had to handcarry this piece which I got for the princely sum of 4K. A Mabini shop would easily put a price tag of up to 5 figures for this San Miguel.

Less than a week after my visit to Bangkal, the same shop owner was calling to inform me that a few more santos have arrived from Cebu. I forced the shop owner to open her store on a Sunday and these are what I saw: 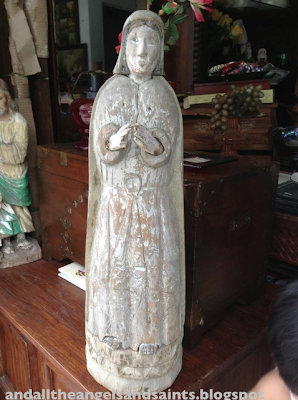 A primitive, paint-less Virgin of heavy molave wood was standing on the entrance. I looked at it and it appeared to be carved from old wood, and I sensed that it was just vintage, and not an antique as it was touted to be. Remnants of white escayola remain, but I could not find any faint trace of colored paint. Suspicious also was the way the head was carved from a separate piece of wood, then plugged and nailed onto the top of the body. The hands were all accounted for, which furthered bolstered my feeling that this could be a ‘new antique’. As my collecting mantra goes, “when in doubt, don’t”, so I passed up this image.


Certainly, the next tabletop image shown me was a genuine antique. It is a representation of the Immaculate Concepcion carved in the naïve style. That was where its charm lay—from its almost comical facial features to its seemingly paralyzed hands, stretched out straight from the flat body.


Its coloration was fabulous, reminding me of old, brilliantly painted folk santos from Mexico, right down to the floral motifs painted on the cape of the Virgin. This is an old, primitive piece, carved by an untrained artisan. 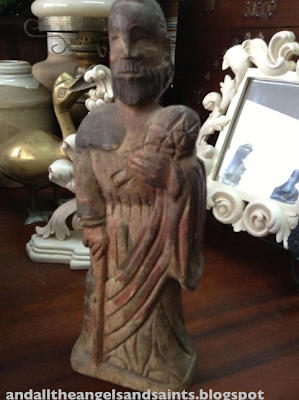 A less impressive piece was this smaller, shallow-carved santo that seemed to be like San Pablo, which I also had to leave there. There were also crucifixes of varying stages of completeness; one with a corpus, one without, and still another without a crossbar. They’ll be good for future restoration prjects, but for now, I am satisfied with my found pieces.

I have heard that a few antique dealers have started to descend upon Bangkal looking for santos and other antiques. You can beat them at their picking game—just come for regular visits and don’t be afraid to scrounge. You will never know what you will find, so expect the unexpected—all for the right budget!
Posted by Alex D.R. Castro at 5:11 PM 1 comment: 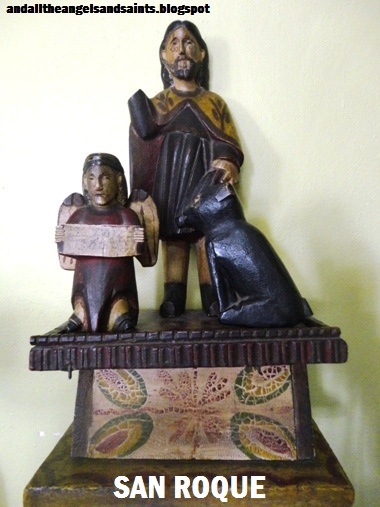 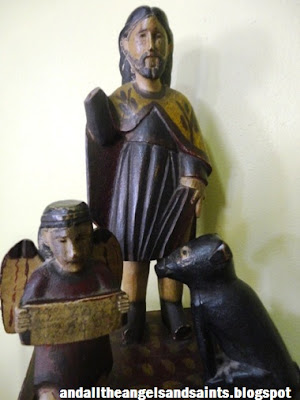 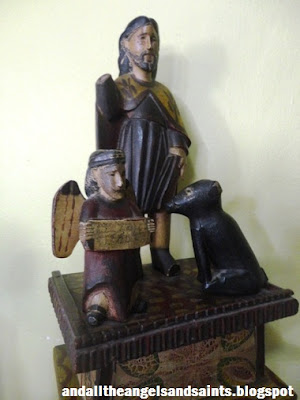 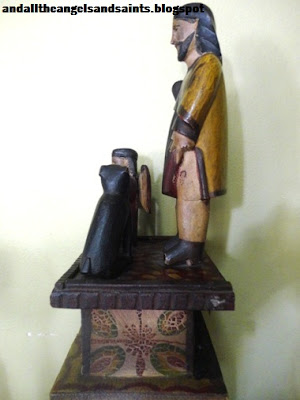 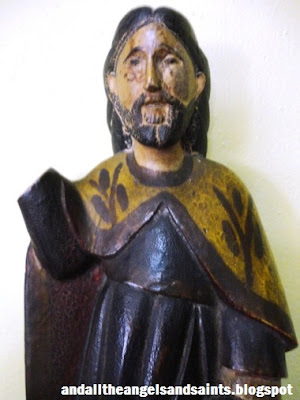 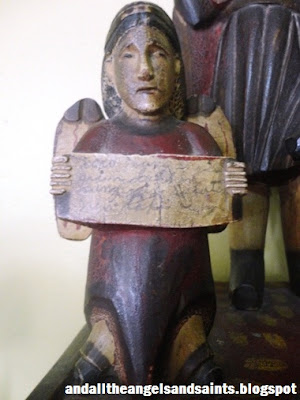 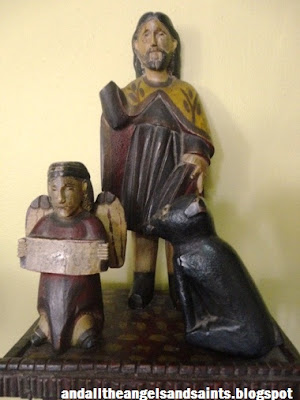 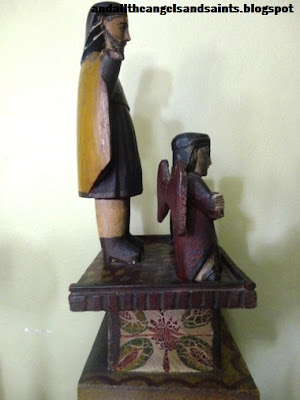 It is indeed amazing that inspite of the santo’s crudeness, the representation adhered strictly to the prescribed iconography of the pilgrim saint. I paid Php 650.00 for the tableau, which was a hundred bucks less than what one would pay for in Manila. To this day, thirty years after, San Roque and his companions remain to be a favorite in my collection, a fine example of the art of the Pinoy santero at its most exuberant.
Posted by Alex D.R. Castro at 6:29 PM No comments:

The San Agustin Museum was put up right next to the Church of San Agustin, in Intramuros, Manila--the only church that survived World War II. It houses some of the most exquisite examples of sacred art in ivory, and these are just some of them: 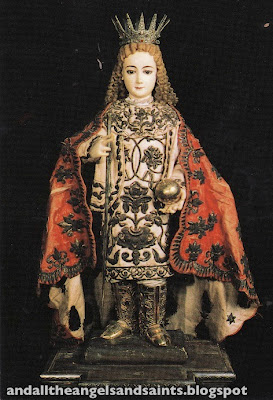 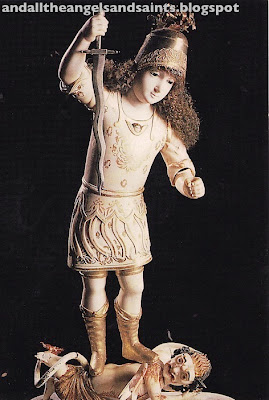 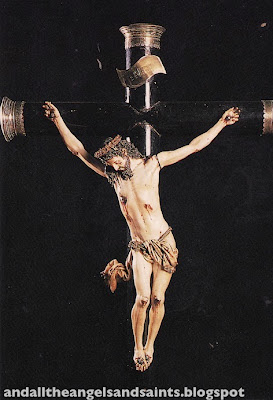