IVORY IMAGE OF SAN LUIS OBISPO. An heirloom image of a family from Lucban, Quezon.

San Luis Obispo de Tolosa is known primarily as the patron saint of Lucban, Quezon and Baler, Aurora. Little is known of him in other places of the Philippines, but in the United States fore example, the mission house named after him (Saint Louis, Bishop of Toulouse), occupies a prominent place in California history, it being the fifth mission founded by San Junipero Serra in 1772.


SAN LUIS OBISPO. The oldest known San Luis image from Lucban, which used to occupy a niche in the facade of the old church.

St. Louis was born on 9 February 1274 to Charles of Anjou and Maria Arpad of Hungary  in Brignoles, Provence, and spent his childhood years in Nocera, Italy. While his father was at war, he was taken to Barcelona as a captive and studied under Franciscan friars for 7 years.


LUCBAN'S SAN LUIS. Another local image of the boy bishop from the church of Lucban.

When he became of age, he was named archbishop of Lyon despite his captivity; he assumed his father's secular titles upon his father's death, gaining his freedom in 1295.


SAN LUIS IN AN URNA. An antique tabletop image of San Luis Obispo, from a Lucban family.

Thereafter, he went to Rome and gave up all his royal inheritance in favor of another brother, Robert of Anjou. He took the vows of poverty, chastity and obedience and two years later, in 1297, Louis was consecrated Bishop of Toulouse. There, he earned a saintly reputation with his activities--feeding and serving the poor.


HEIRLOOM IMAGE OF SAN LUIS. Carved in the round, this private devotional image of San Luis is another Lucban family heirloom.


SAN LUIS ENSHRINED IN A RETABLO. A 1960s image of San Luis carved by a Bicolano craftsman rests in a side altar of the Lucban church.

His cult became popular first in Medieval Hungary, but the Franciscans spread the devotion in Europe, observing his feast day in their calendar and taking his relics in 1423 to Valencia, where he was made patron saint. 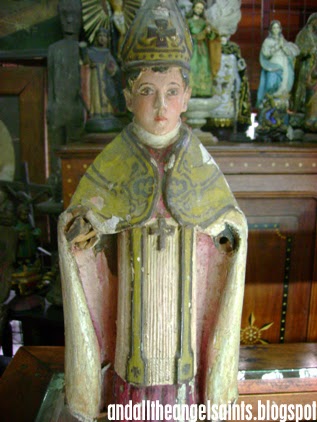 As expected, very few images of San Luis de Obispo can be found in the Philippines, mostly concentrated in Lucban.  Rarer still are home devotional santos of this young bishop-saint, a few of which are shown here. 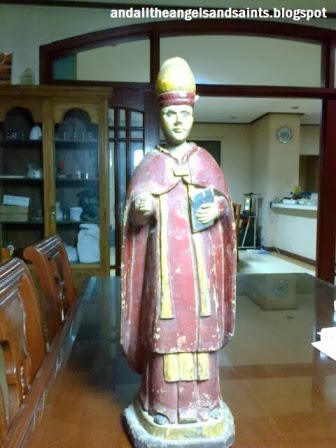 His iconography shows the boy bishop as a young, beardless religious, attired in a bishop's robe and holding a crozier and a book, often with a discarded crown by his feet.

(Many thanks to Mr. Jayson Maceo, for the use of his photos)
Posted by Alex D.R. Castro at 3:38 PM No comments:

The Malolos Sto. Nino Fiesta was conceived and organized in 1966 by Dr. Luis Santos. The idea of an exposition of different Sto. Nino images came later, as suggested by resident Zeny Tengco. Since then, the annual Nino Exhibit has become an anticipate affair every January. Presented here is a selection of Sto. Nino images exhibited on the occasion of the Sto. Nino Fiesta of Malolos, and the International Celebration of the Children's Year from way back 1979---exactly 35 years ago. 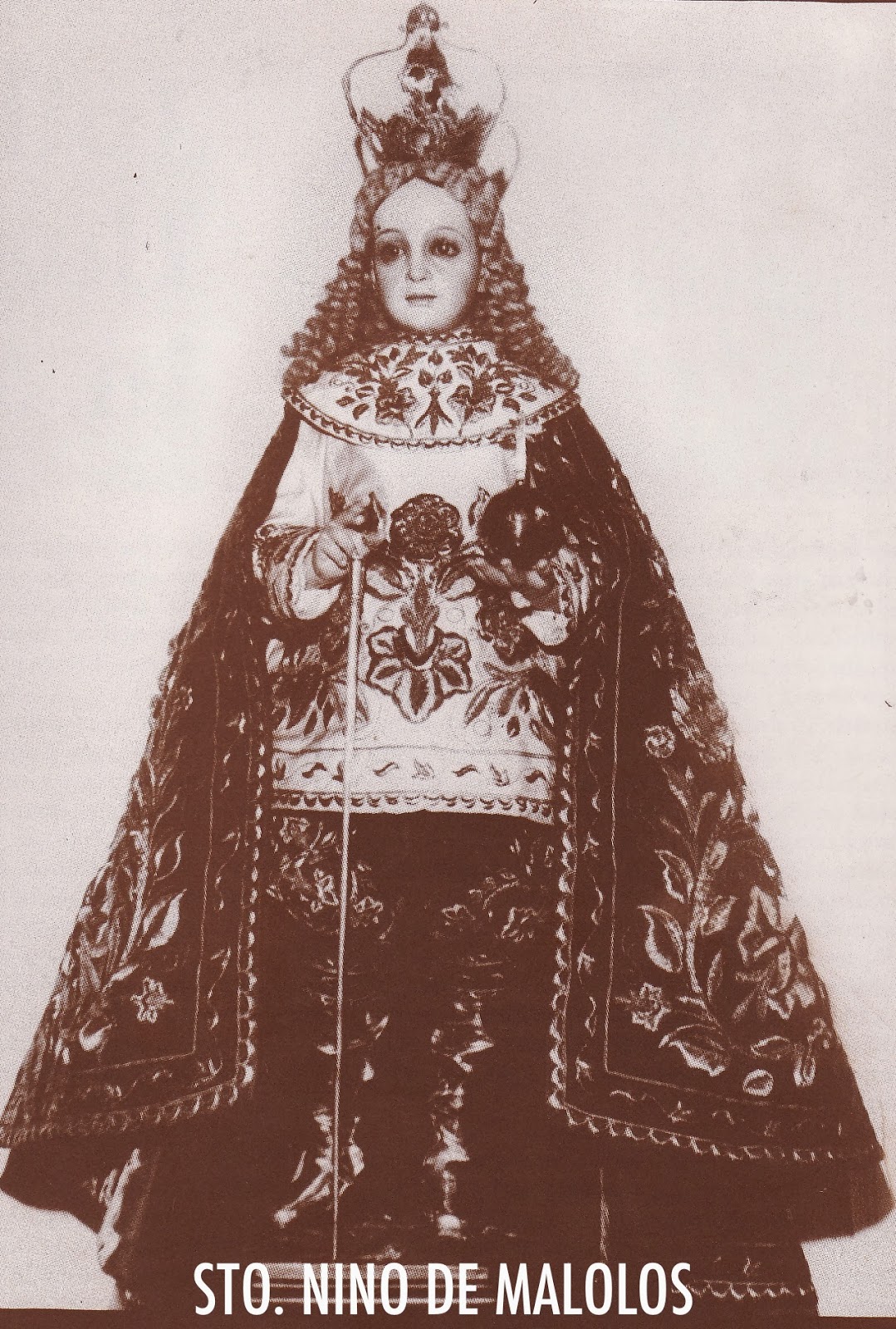 STO. NINO, PATRON OF MALOLOS.
Owned by Dr. Angel S. Tantoco and Family, this heirloom image has been in the family for many generations. It accompanies the Immaculate Virgin during the fiesta procession and is the acknowledged patron of the children of Malolos. Of ivory, it is characterized by its sweet smile, dreamy eyes and a majestic stance. It is carved in the classical style, and it is arrayed in a costume similar to that worn by King Louis XV of France. 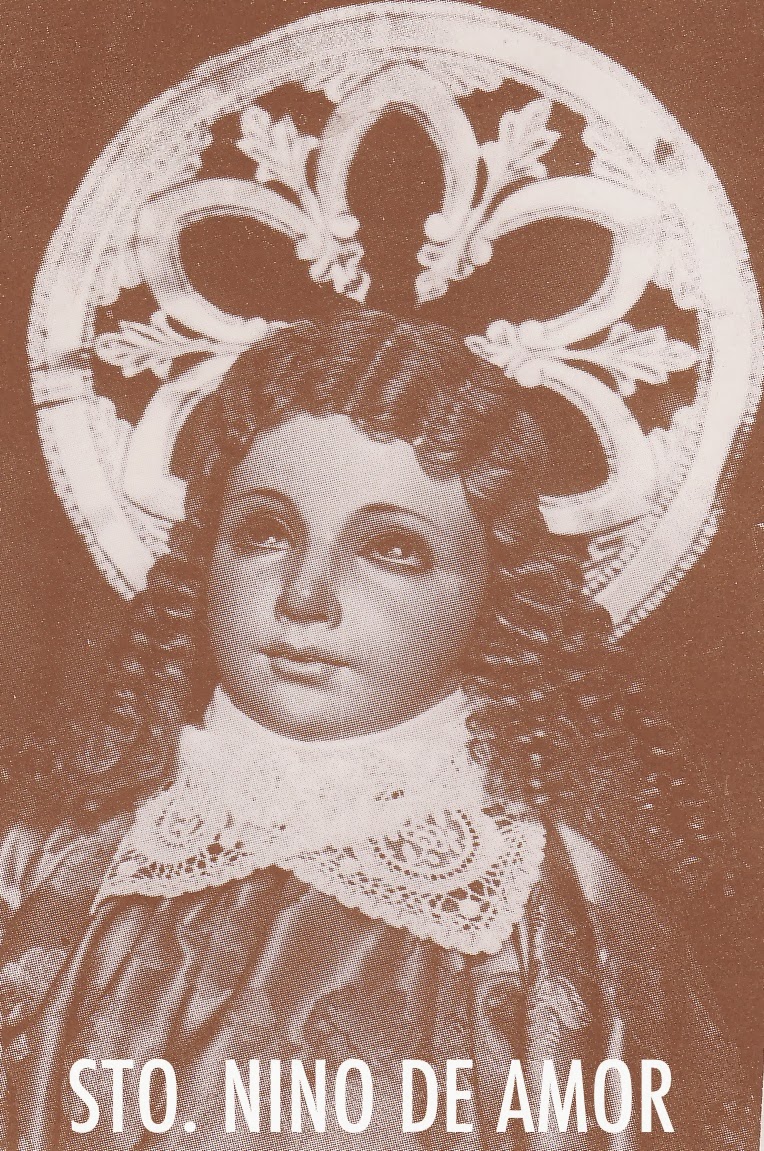 STO. NINO DE AMOR
Owned by Ms. Corina Tengco, this image was given to her by her mother. A holy card (estampita) of an Infant Jesus inspired the styling of this image. He bears a basket of fruits as a symbol of love. 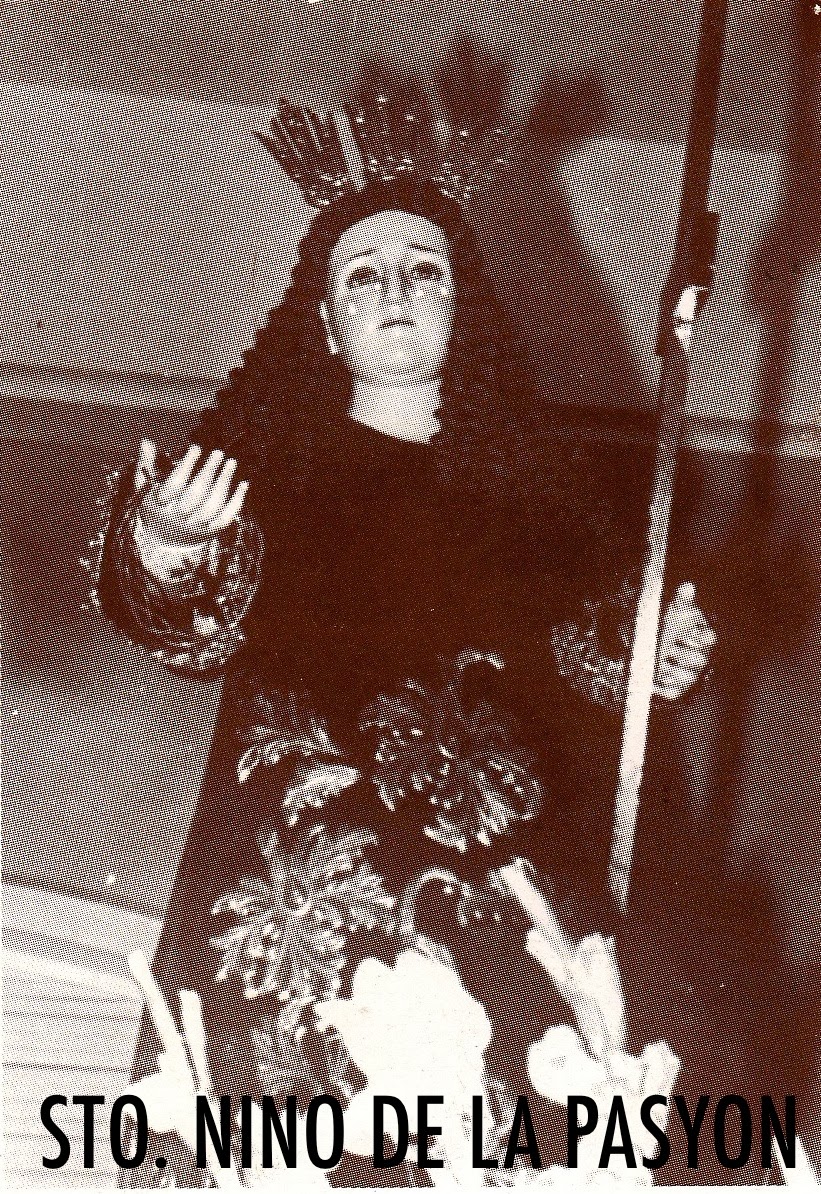 STO. NINO DE LA PASYON
Owned by Mr. Dez Bautista. The antique head of this image was bought from an old family in Tarlac whose house was lost to a fire. Only one room survived, the room in which this image was kept. It is believed that the reason why this Nino is always on tears is because of the portents of death he always sees. 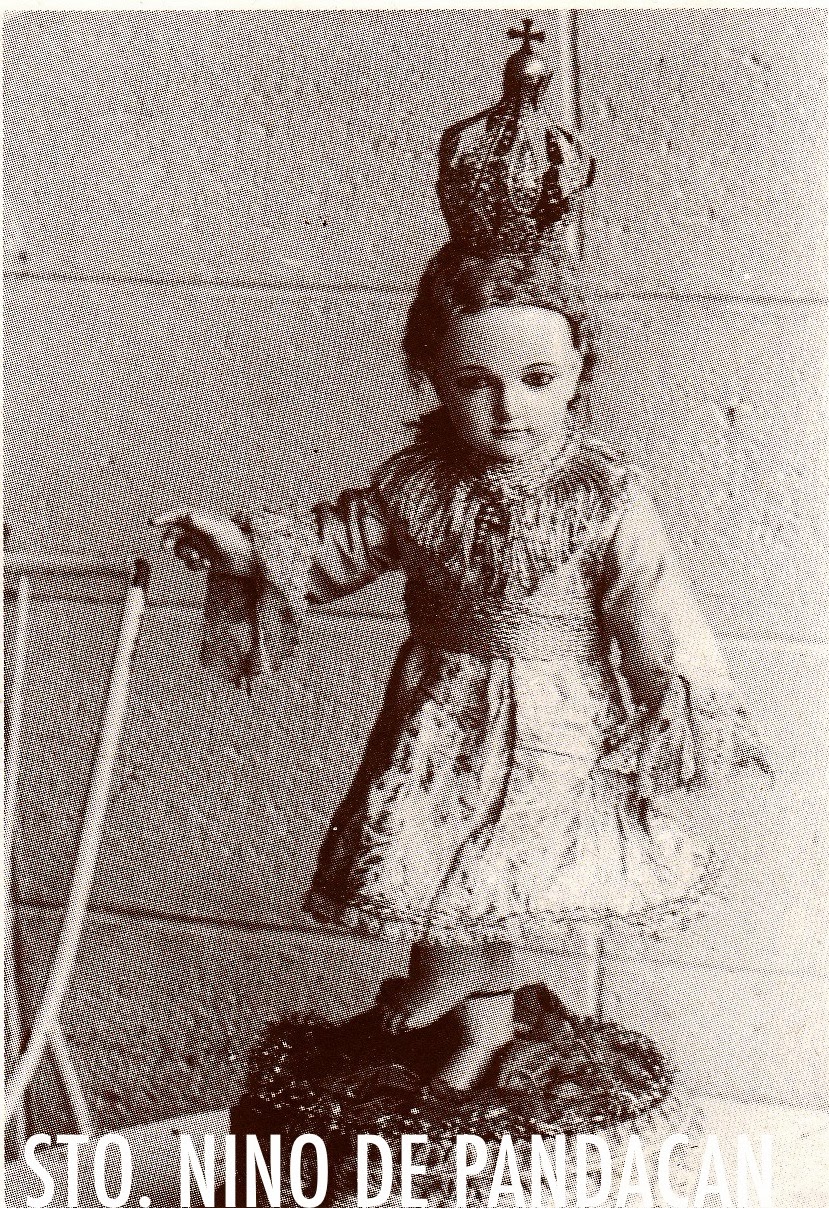 STO. NINO DE PANDACAN
Owned by Mr. Steve de Leon. The origin of the image of the original Sto. Nino de Pandacan is shrouded in myth. The image was said to have been found by children playing near the side of a well. Owing to His miraculous nature, a church was built near the well where the Nino continues to rest and venerated. 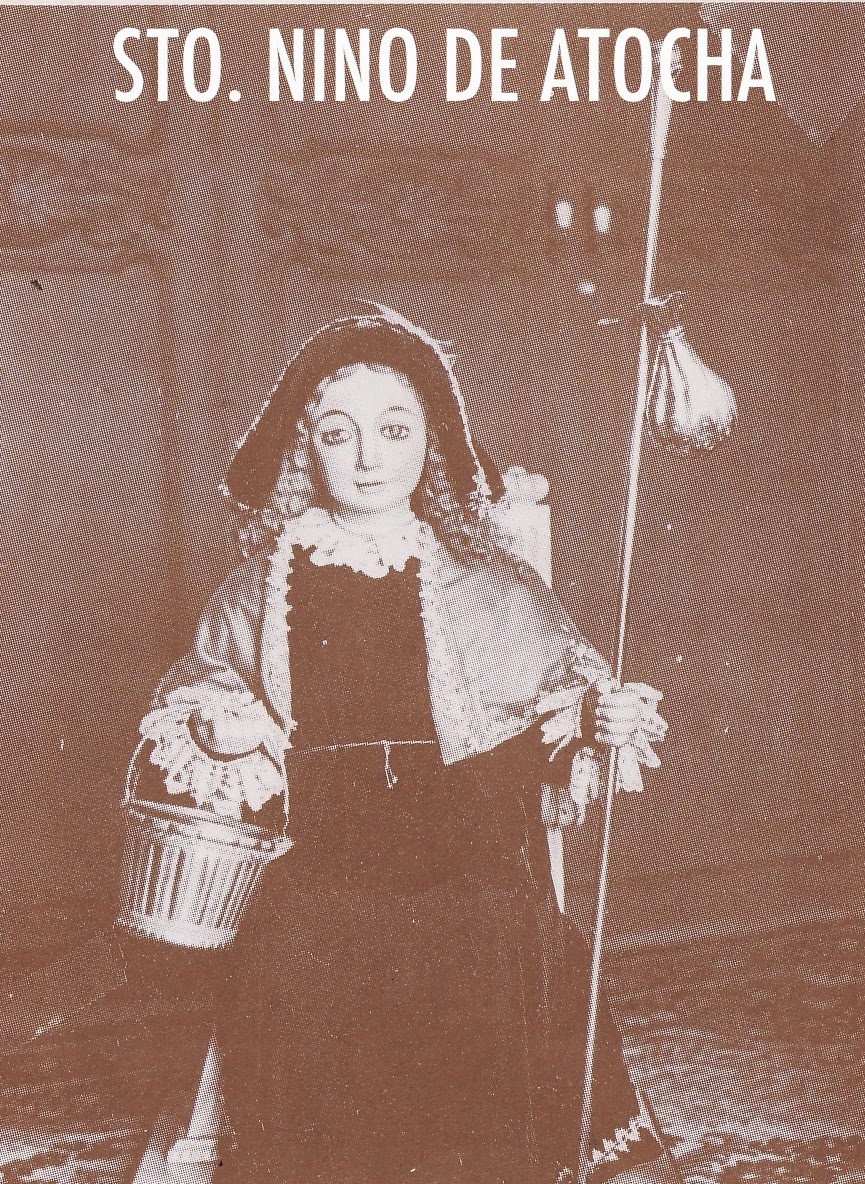 STO. NINO DE ATOCHA
Owned by Mrs. Zeny Tengco. The owner accidentally saw a medal of the Holy Child Jesus of Atocha in Rebullida, so she was inspired to have a statue carved. He is dressed as a pilgrim, with a staff, a drinking gourd, a basket and wears a cape with a shell symbol. 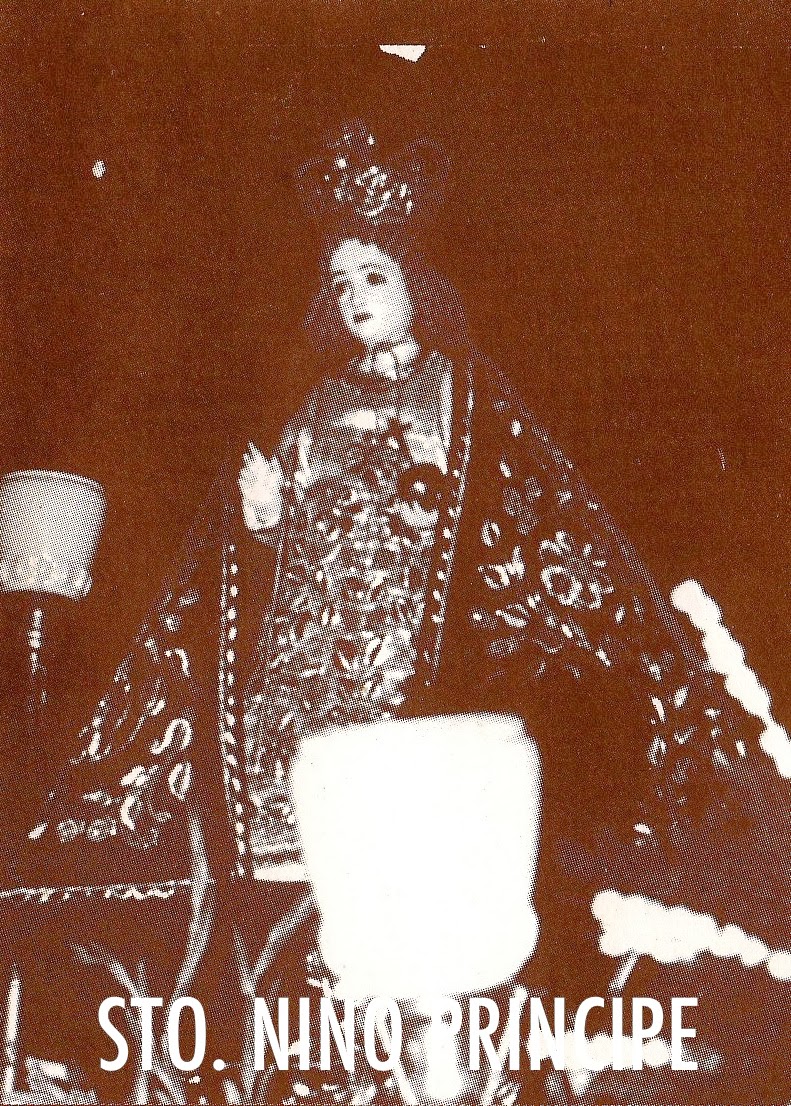 STO. NINO PRINCIPE
Owned by Mrs. Ching Lopez. It is enshrined at the Tantoco House as a companion piece of the Sto. Nino de Malolos. It derive its title from its royal raiments-- a little prince. 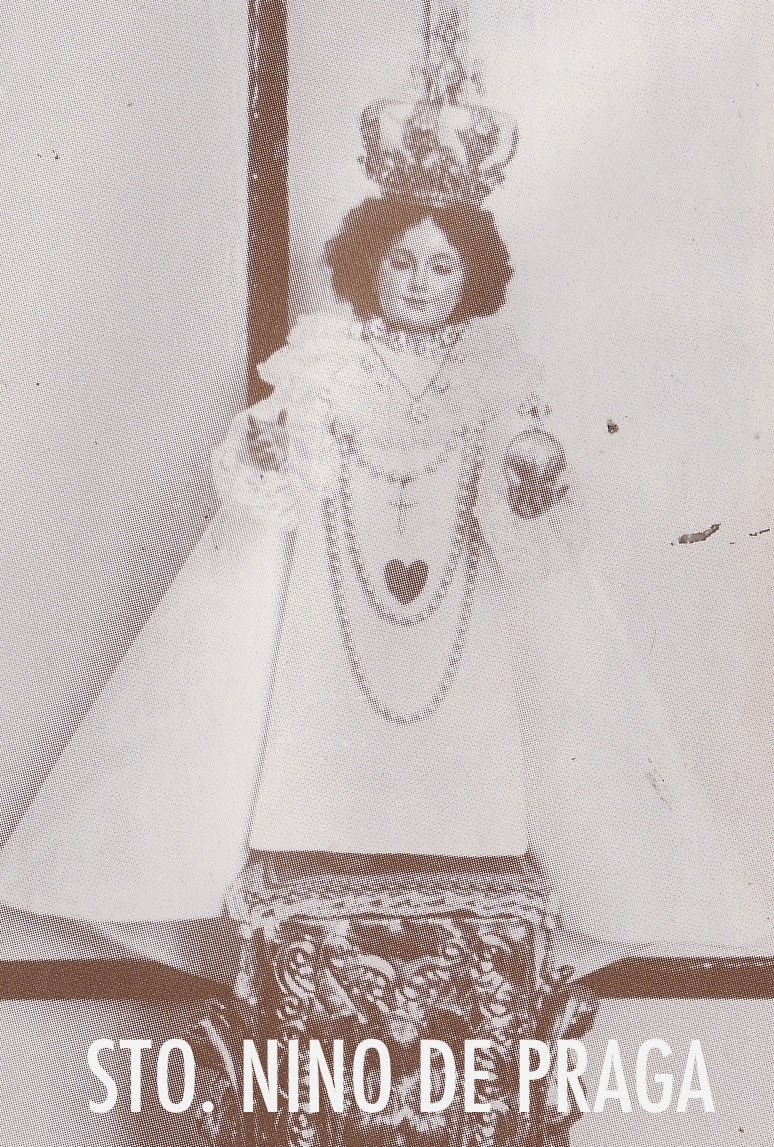 STO. NINO DE PRAGA
Owned by Carmencita and Augusto Paez-Banzali. A vintage Infant Jesus of Prague purchased from a talyer in Quiapo.

The recent theft of the antique ivory Nino Jesus of the Virgen de la Correa of Betis last Dec. 30 (the district’s fiesta, no less) once again put antiquarians and sacred art collectors on spotlight. Often, the knee-jerk reaction is to impute suspicion on antique collectors and their inordinate urge to acquire antiquities at any cost, leading many to conclude that collectors themselves are the major masterminds of church theft. 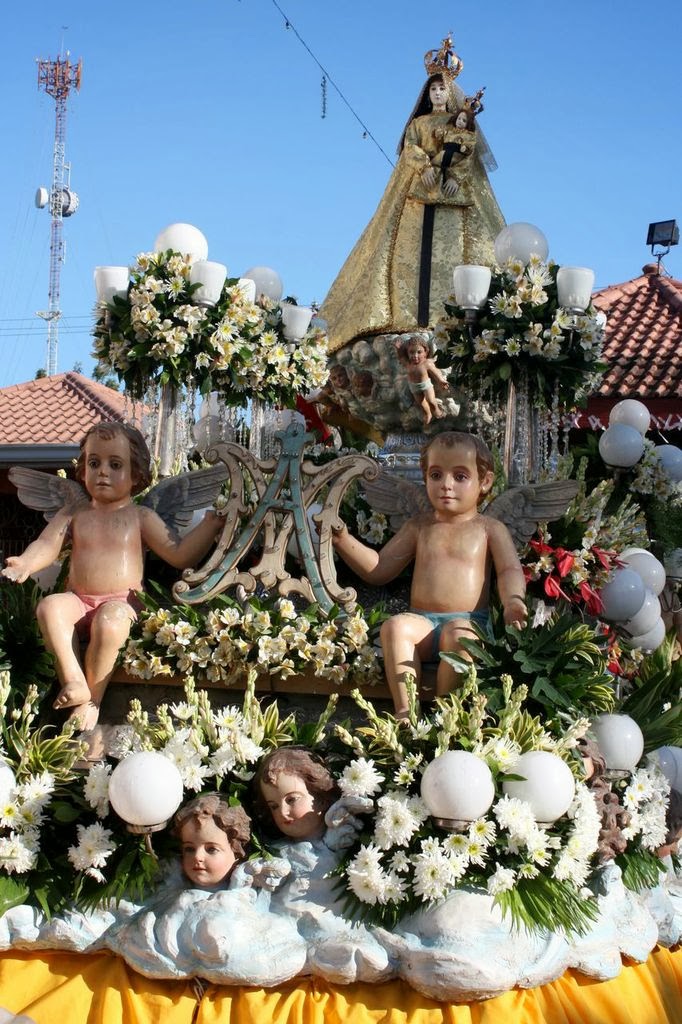 THE DRESSED UP CARROZA OF THE VIRGEN DELA CORREA, BEFORE THE PROCESSION.
Photo courtesy of Mr. Richard Diño

There are allegedly horror stories of affluent collectors running a ring of antique dealers, financing them so they could acquire prized church art, through all means—from cajoling priests to part with their old santos as they renovate their churches, to resorting to paid crimes like theft and robbery. True, there are spurious collectors, middlemen and dealers, but they are few and far between. Past events involving the theft of church art have, in fact, included collectors playing significant parts in their return and recovery.

Indeed, it is this instinct to save, to recover, to conserve and preserve—that drives a collector to do what he does, which, in a way, is aligned with the work of cultural and heritage activists. It took an antique collector with a discerning eye, for example, to recover the Santo Nino de Romblon, which had been lost for 22 years. In 2009, antique collectors networked online with heritage workers to find the image of an antique San Juan, stolen from one of the retablos in the Cathedral of Tayabas. 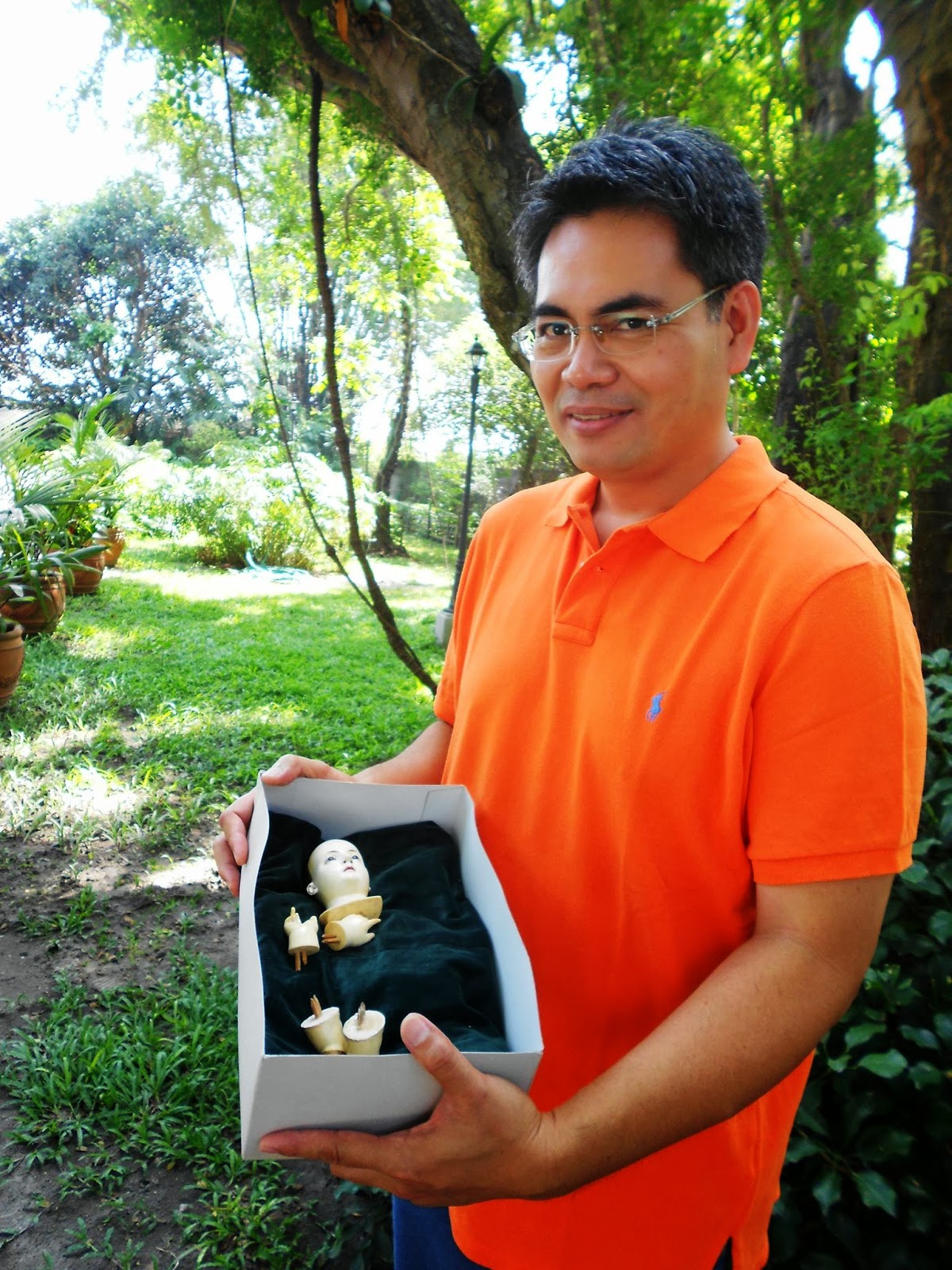 Thankfully, there is a happy ending too, to the recent event in Betis. A few days after the reported theft of the ivory Nino, the Archdiocesan Commission on Church Heritage (ACCH) of the Archdiocese of San Fernando, announced the successfully recovery of the revered image, with the help of yet another collector and renown ecclesiastical artist, Tom Joven.

Joven, who heads the Parish Pastoral Council of San Guillermo Parish of Bacolor and who also serves as member of the Tangible Heritage Committee of ACCH, reported his find to diocesan church authorities as the image surfaced in the antiques market, days after it was reported to be missing. His network of collector-friends provided him leads that allowed him to track the image in Manila, and which he eventually purchased---the ivory parts brought to him discreetly in a plastic bag, minus the wooden body. 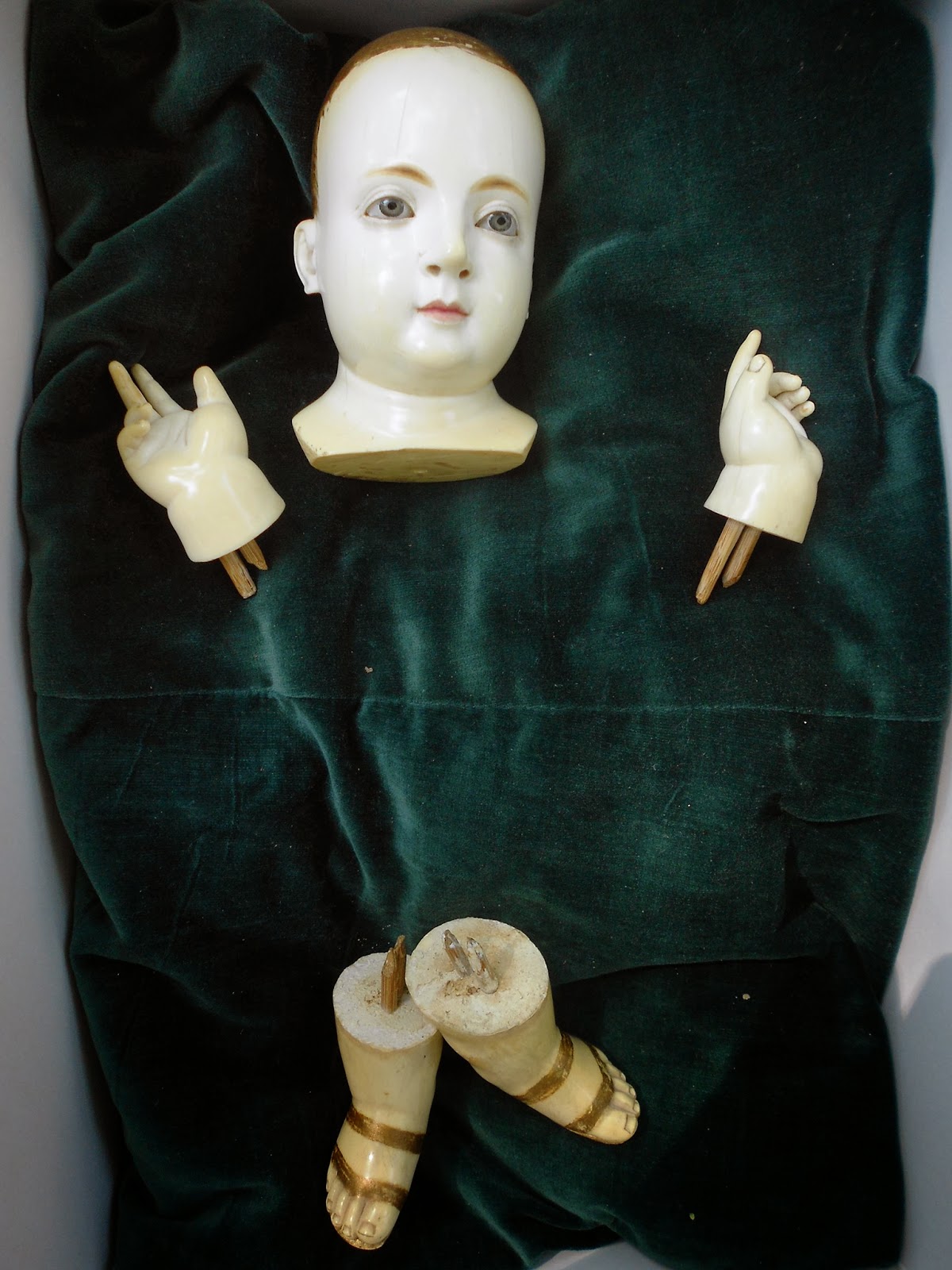 "I ONCE WAS LOST...BUT NOW I'M FOUND".
THE RETURNED NINO, MINUS THE WOODEN BODY.
Photo from the FB Page of Auxiliary Bishop Pablo Virgilio David

Immediately, he notified the church authorities headed by Auxiliary Bishop Pablo Virgilio David and the Pastoral Council of Betis. The acknowledged santo expert offered to restore the image and have it ready for official turnover to diocesan and local church authorities in time for the celebration of the Santo Niño Feast on January 19 (3rd Sunday of January).