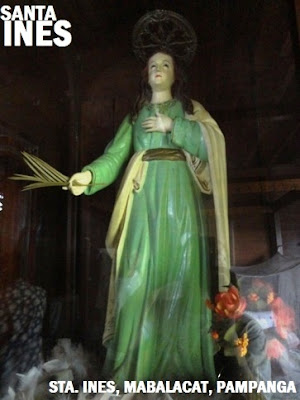 Sta. Ines is one of the more than 20 barangays of Mabalacat that is perhaps, the most popular among motorists passing the newest chartered city of Pampanga. It is here that one can get out of the North Luzon Expressway—via the Sta. Ines Exit—and into the old McArthur Highway. For many years, the Sta. Ines Exit was considered the end of the NLEX, and another alternative entrance to Clark Field.


Along the narrow exit stands the ancestral house of the Dela Cruz Family, in which an old image of the town patron is kept in an altar by the descendants. The Dela Cruzes figure prominently in the creation of this barrio, which was founded as early as 1842, according to the Historical Data Papers of Mabalacat, although an alternative year—1878—is more realistically ascribed as its foundation year.

The original owner of the future Sta. Ines belonged to one Don Francisco Pamintuan, and the land was inherited by his son, Camilo. Mariano de la Cruz later bought the land and settled it. One of the early settlers of the barrio, Ines Basilio, gave the place its name. She, in turn, asked that the place be held under the titular patronage of the child-martyr, Sta. Ines or St. Agnes.

St. Agnes, from a noble Roman family,  was just 13 years old when she was martyred for her faith. Refusing to marry the son of the prefect Sempronius, she was beheaded and her blood flowed on the stadium floor. Sta. Ines became a patron saint for young girls and has become a symbol of chastity and purity, represented by the lamb that also has come to stand for her name (Agnus).

Mariano de la Cruz married Simeona de la Cruz (no relation) and their union resulted in the following  offsprings: Emiliano, Librada, Sebastian, Antonino, Pilar, Vicente and Rosario. For their young girls, the couple commissioned an unknown santero to make them a small image of their holy patron, carved in the round (talyado). The image of Sta. Ines, almost pumplish,  stands 2 and a half feet tall at most. It originally came with a carved lamb at her feet, but a replacement animal now accompanies her, which suspiciously looks like an old dog of San Roque.

Over time, to protect and preserve the original image, a duplicate statue was made, faithfully replicating the antique Sta. Ines. 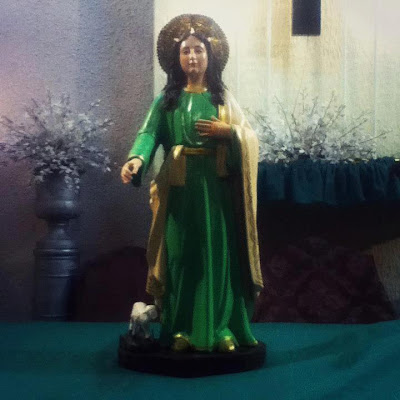 THE REPLICA IMAGE OF STA. INES. (From the Sta. Ines Chapel FB Group.)

On one hand, she used to hold a palm of martyrdom, but a fresh olive palm leaf plucked from some garden has now become her attribute. She is carved from soft wood, and wears her original gold-plated pukpok halo with very intricate relief patterns. The image has been painted many times—the vestments in green and yellow. It has finely carved features, apparent even through its thick layers of encarna.

Meant for the family’s private devotion, Sta. Ines once resided in an urna alongside another small but older heirloom santa—Sta. Maria Magdalena—which was cared for by one of the daughters, Rosario de la Cruz (Angeles), who donated it to the barangay of Sta. Maria Libutad. The Sta. Ines image was bequeathed to Pilar, who, upon her death, passed it on to her daughter Iraida de la Cruz. It was also Pilar’s way of showing her gratitude to a daughter who unselfishly cared for her spinster sister, Librada. 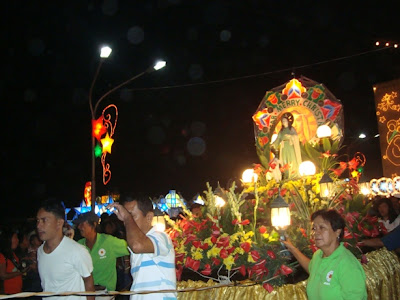 The two santas go out on procession at different times of the year; Sta. Magdalena joins the Holy Week processions while Sta. Ines is borne on her own carroza during the December Maytinis festivites. She also comes out regularly on her feast day, January 21. 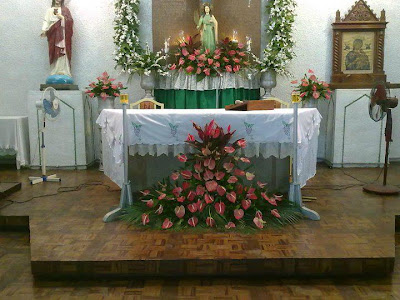 INTERIOR OF STA. INES CHAPEL, where the image of Sta. Ines used to reside for many years. The chapel was a donation of the Policarpio Family. (Form the Sta. Ines Chapel Facebook Group)

When the Sta. Ines Chapel, a donation of the Policarpio Family, was constructed in the late 70s, the Dela Cruzes generously allowed their precious family image to be enshrined there. A new, larger Sta. Ines image was commissioned by the barangay in 2011, and the antique Sta. Ines reverted back to the heirs. 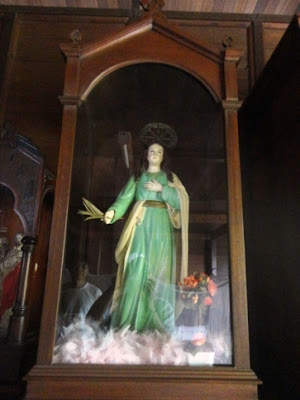 The current owners, siblings Socorro, Alda, Ernesto Jr. and Concesa de la Cruz, have returned the image to their ancestral house, to be used once more for their own personal family devotion. In the prayer room of the Dela Cruz home, now being beautifully restored by Concesa and her family, Apung Ines is permanently housed in her own urna, resting on a cotton-filled floor to simulate her heavenly abode.

Sta. Ines images are also venerated in such places as Bulacan, Bulacan; Camarin in Caloocan and in Sta. Ines, Bacolor, Pampanga.
Posted by Alex D.R. Castro at 5:41 PM 4 comments:

Sta. Marta, together with siblings Maria and Lazaro, come from the village of Betania (Bethany) near Jerusalem. In the Biblical account of Luke, Jesus and His disciples visited their home three times. In those visits, while Maria her sister listened intently to Jesus, it was Marta who fussed about housework. Jesus reminded her that listening to His word was more important, which her sister has done. The next visit shows how well Marta has learned this lesson. Her brother Lazaro had just died; when Jesus arrived, she left her mourning to welcome Him with her trademark hospitality. She became a witness to Jesus' resurrection of her brother, Lazaro, from death.

Sta. Marta is the patron of cooks and homemakers. Her attributes include house keys, basket (or platter) of bread and fruit, cross. This representation is what is brought out in procession during the Holy Week in the Philippines.

All photos taken by Dr. Raymund Feliciano, under the care of the writer. 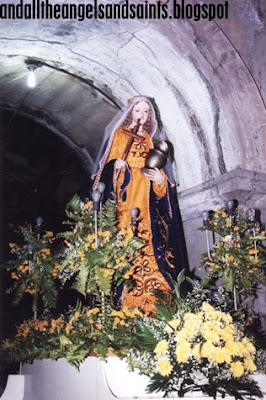 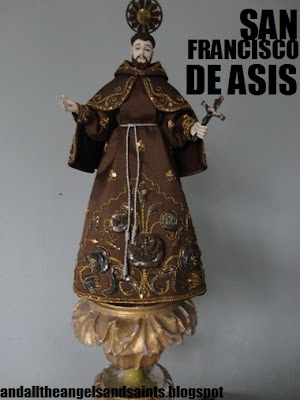 Thanks to the wonder of cellphone technology, I was one of the first to lay my sight on this antique ivory head-and-hands San Francisco de Asis (St. Francis of Assisi). An antique dealer sent this to me for my consideration and I immediately expressed interest in this well-made treasure sourced from a family in Las Piñas. 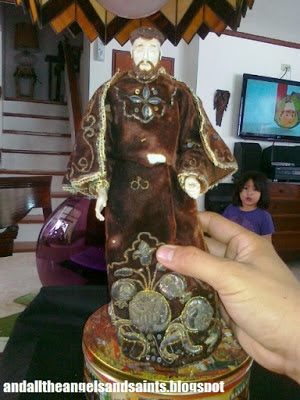 The tell-tale stigmata on the hands clearly identified it as the Franciscan saint prone to ecstasy. His left hand was in a clutching position—which meant that it was holding a crucifix at one time, one of his attributes. The other hand would have held a skull, although the saint’s palm had no hole to anchor the skull. 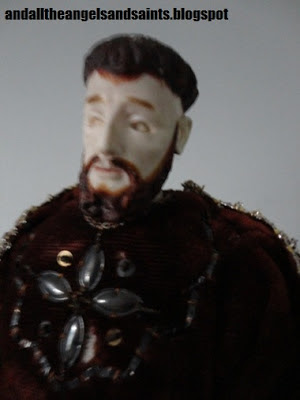 The ivory santo was not perfect though, as the glass eyes were missing and so were the metalworks. The replacement velvet vestments were trimmed with the original embroidery from the old one, marked with a few holes here and there. The base, was also missing, but the dealer assured me that he just forgot to retrieve it from the owners.

I already am a happy owner of a San Francisco de Asis ivory santo which I purchased at Makati Cinema Square at an unbelievably giveaway price. Found in a box with assorted stuff for sale, it was a perfect piece, complete with a brass halo and a banner. To date, it is one of my most remarkable finds. 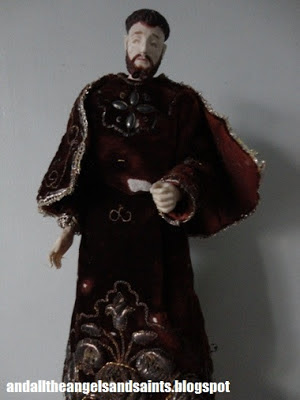 This San Francisco, however, was iconically different, and I was determined to have it restored by Dr. Raffy Lopez, even if he had a full schedule. As always, I had my way and he agreed to take on the restoration work, with the condition that I give him no deadline. My only instructions were to keep the base intact, as much of the gilding was intact, minus the sheen. I also asked him to improve the cut of the vestments, as I have seen Franciscan santos wearing short capes and something like a cowl. 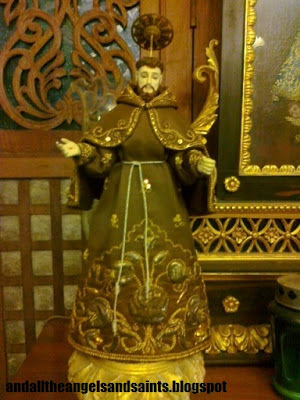 I always have a way of losing track of my projects and when he texted me early this week to tell me that my San Francisco was ready for pick-up (complete with my, ehemm, bill, which was as reasonable as it could be, given my ‘demands’). He sent me a cellphone photo to give an idea how it turned out to be. 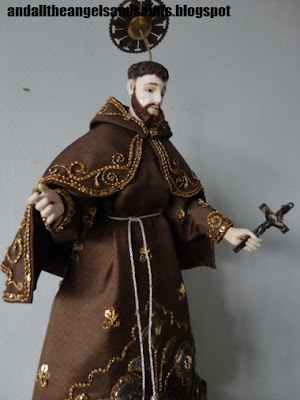 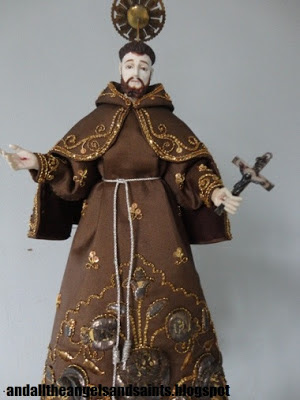 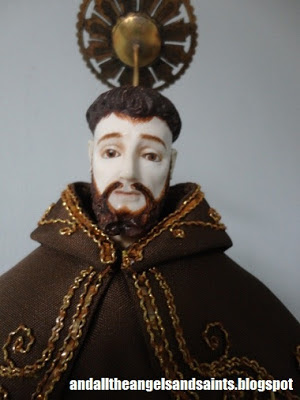 On top of his tonsured head, was an antique brass halo which I got from the Heritage Arts in Cubao; it’s a perfect match (well, okay, it was a bit bigger!). 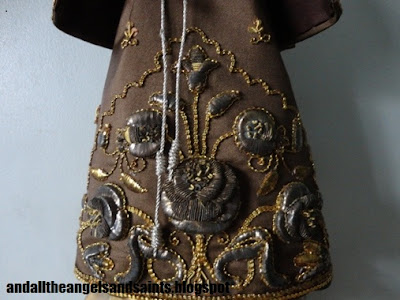 The old but serviceable embroidery were neatly transferred on a brown, softer fabric, and augmented with new ones. The cowl and the short manto were incorporated in the new habit, trimmed with simple gold embroidery at the hems. 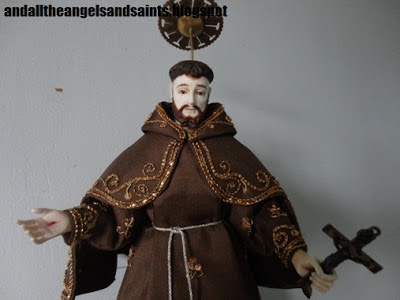 I had been keeping the cross from my late Mother’s silver rosary for years now. It had been a birthday gift by a close relative for my mother, and it was etched with the presentation date—1951, which meant that my mother was just 28 when she received this present. The silver beads have been lost, and all that remained was this silver cross with the tiny corpus. When I slipped it in the closed hands of San Francisco, it fit his clutch perfectly! 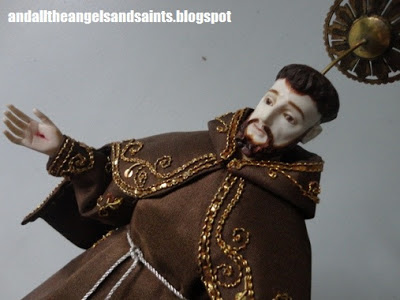 So ends another tale of santo restoration for my San Francisco de Asis. But I would not let it end without telling you of my visit to the saint’s hometown in Assissi, Italy back in 2008. I got to walk the streets of Assisis, enter his revered domed church and pray on the floors where he once knelt. 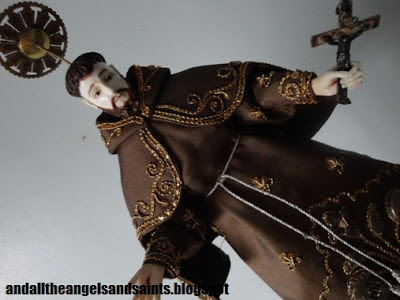 Why, I even got to see his tomb. Whenever I see this santo likeness of him, I know I will always be reminded of that sanctifying pilgrimage, breathing the same air as that extraordinary man of the cloth known to all as San Francisco de Asis!
Posted by Alex D.R. Castro at 8:29 PM 2 comments: