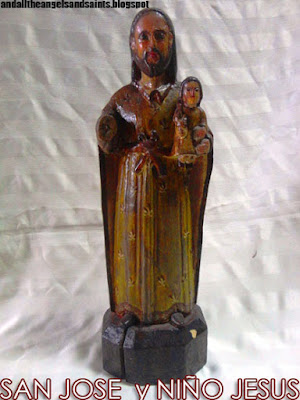 Oh, the things you find in a warehouse! Yes, this San Jose with his little Niño—carved from a single piece of wood—was found in a dusty warehouse of demolished house parts and old lumberyard materials. It was such in a sorry state—with paint peeling, base cracked, and features that are hardly recognizable.

But I thought the 15.5 inch santo looked promising underneath that layer of dust and grime. It had all the characteristics of a true primitive--carved with shallow features, painted with bright colors to cover up the stiffness of the figure. 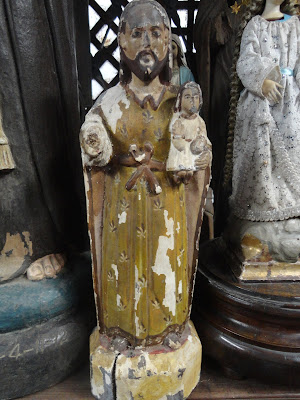 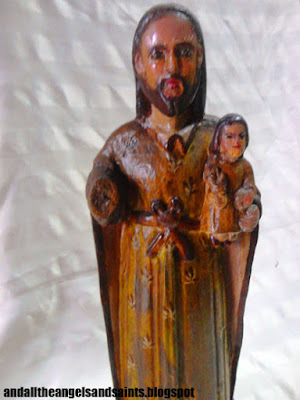 There are little details that added much to the appeal of this peace which I got next to nothing. The fact that it was totally fashioned from one piece of softwood wood, including the base, was remarkable, as the symmetry of the piece was almost perfect. Why, the silhouette looks almost like an awards trophy for some contest! 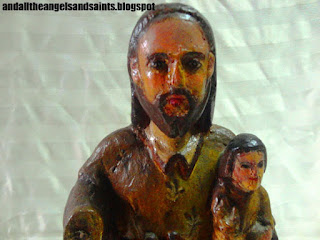 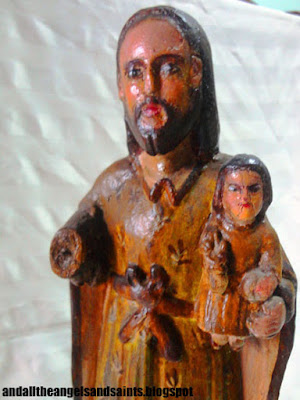 San Jose, himself, looks younger, what with his very sharp, pointed beard and straight black hair. His tunic features a collar while a bow knot is neatly tied high above his waist, as opposed to a simple cord. His robes are painted yellow (which has become grrenish with age) with chicken feet-like prints, typical of Visayan santos. The santo tapers down to the simple, squarish base, with corners lopped off. 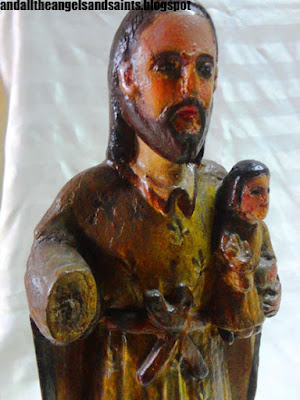 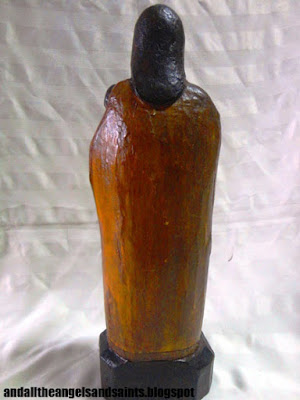 Child Jesus on the other hand, looks like an afterthought, ramrod-straight in the arm of San Jose. It almost looks like standing, not seated in a cuddle.

All this San Jose needed was a thorough cleaning and a quick trip to a neighborhood painter to make it more presentable. A light coat of varnish to fix the paint was the final touch to this folksy warehouse San Jose and his little Niño—now fit to be displayed in my house!
Posted by Alex D.R. Castro at 3:19 PM No comments: 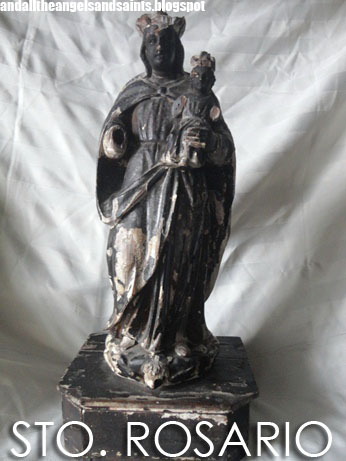 One of the most important and popular devotions in the Philippines  is centered on Our Lady of the Most Holy Rosary –or simply, Virgen del Rosario or Sto. Rosario, patroness of countless far-flung barrios, towns, cities and parishes in the country. It is a Dominican devotion that dates back to th 13th century and propagated throughout the world. It is no wonder that many home altars feature images of Sto. Rosario, showing the rosary-holding Virgin with her Child Jesus. 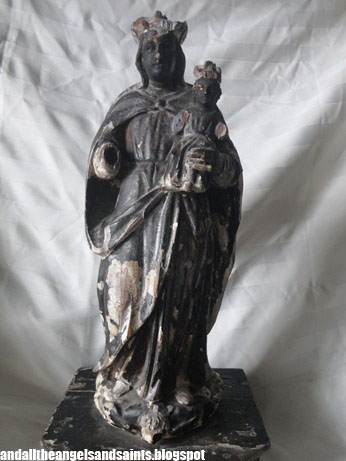 This century-old Sto. Rosario is one such example, carved by an artisan of extraordinary skill, in the classical style. The image was found in Bulacan, in a house demolition-cum-antique shop, part of a lot of antiques that the proprietor was trying to dispose. 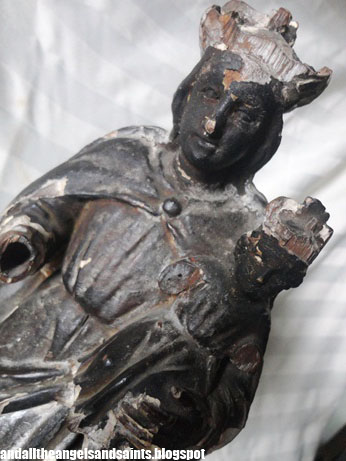 One look and you can tell that this is not the work of a folk santero, for it is exceptionally carved in classical 19th century style, with many wonderful details. It is surprising that this Sto Rosario was carved from softwood, given its quality. But then again, the soft, easy-to-carve material may have inspired and allowed the artist to put in more details. 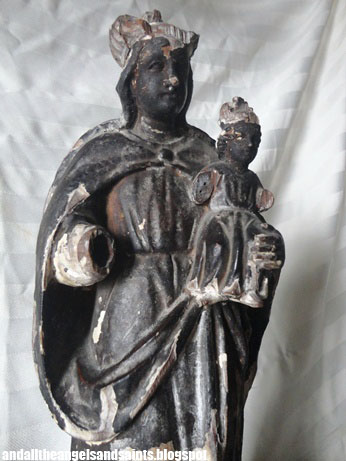 This Sto. Rosario stands 16 inches tall, inclusive of the  plain,  squarish base with 2 frontal corners lopped off. The image alone is about 13 inches tall. Both Mother and Child are crowned with small parts missing, including their hands.  A small, hand-made rosary fashioned from coconut beads, could have been held in the Virgin’s right hand.

But that do not detract from the beauty and antiquity of this religious statue, which is heavily patinated and darkened with age. 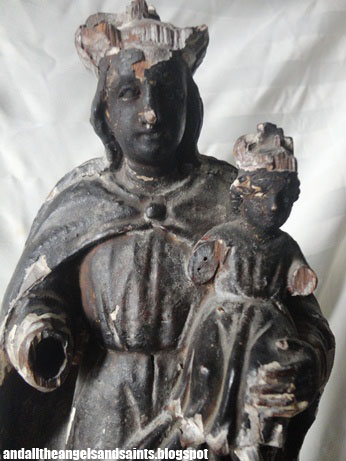 The Virgin cuts a matronly figure, with a plumpish face and built. She stands with a bit of a hunch, her head in a frontal gaze, with facial features well-defined: from her full cheeks,  deep-set eyes, lips ending in a slight curl,  and neck rings. The Niño’s features are hidden in the thick patina, but it is also well-executed, with the Virgen  supporting Him precariously  with her left hand on His knee. 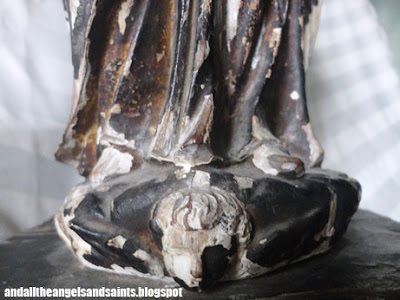 Wearing a cope-like cape that is buttoned on the neck, then draped and gathered on her waist, the Sto. Rosario stands on a cloud-like peana with feet showing, borne by a curly-haired cherub with downcast eyes. The paint has peeled off in her lower extremities, with the primer (gesso) showing, but with traces of gilt still visible. 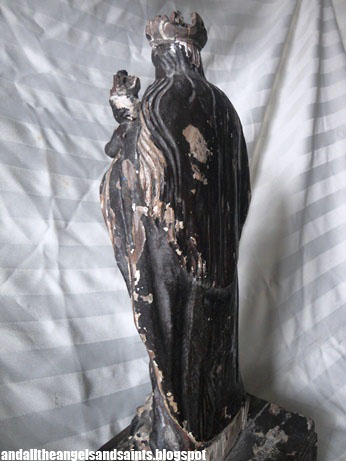 Most of her back is covered by her lush, flowing hair that reaches down her knees. Hair strands are defined by shallow carving, more detailed on the side.  Whoever carved this work of devotional art should be happy to know that his Sto. Rosario-- a product of his skill and passion-- has survived all these years, cared for and loved by an antique collector.
Posted by Alex D.R. Castro at 4:11 PM No comments: