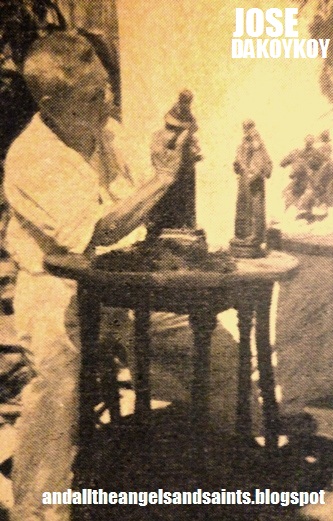 Where physical defects have been a handicap in the pursuit of happiness and livelihood to a great many unfortunate individuals, to Jose Dakoykoy of Cebu City, they have been a blessing in disguise and an indispensable factor in the attainment of his chosen work.

The fourth son of a family of seven, he accidentally became deaf at an early age. He comes from a family known for its musical talent and artistic taste. His brothers are all musicians, having inherited the art from their father, Marcelo, who attended to the choir of the Augustinian order in the Santo Niño church in Cebu. They now furnish church music and religious music for the traditional and popular novenas in the southern islands.

Although Jose is deaf, he has not given up his love for art. He embraced early the painting and sculpturing lines, in which, though no Michaelangelo, he does well. From his eldest brothers, he learned to master the brush and palette as well as the chisel.

As a result, for the last 30 years, he has been furnishing Cebu and the neighboring islands with his pastels or miniature images of the different religious characters connected with the life of Jesus Christ in different stages. The rich and the aristocrats as well as the poor go to him for their Belens, especially shortly before Christmas.

He also does interior decorating and portrait ainting, and designs decorative fancy objects. He works fast and alone throughout the year in his own home which he constructed out of his earnings as a painter-sculptor. Quiet and reserved, Jose leads a peaceful and simple life. To him, cockfighting and gambling, and drinking are mere frivolities.

He is a determined bachelor. Simple and humble as he is, relatively few know of his real talent. Contented with His Art Unschooled in the art and technique of his profession, he is contented and at ease working with crude instruments, principally with a small, sharp knife for shaping objects, and the chelepads of crabs for carving delicate features of images.

From religious and illustrated calendars, he copies his models. From September to December, he is kept busy until late at night when orders for belens from different provinces have to be delievered before the Yuletide season. An ordinary belen of 30 figures sells at between P40 and P60, while the more elaborate, which have bigger characters, cost as much as P150; part of the amount he receives for his productions is distributed to his relatives on Christmas Day.

Now 54, he still plays native songs—the popular and melodious balitaws—on the guitar, especially at night to comfort him in his solitary life.
Posted by Alex D.R. Castro at 12:00 AM 2 comments: 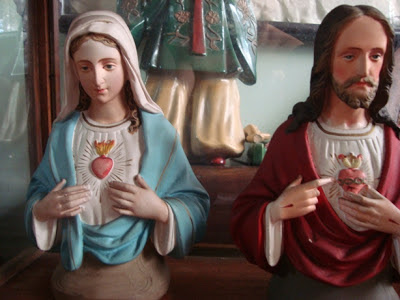 I took Friday off last week as I thought I needed a longer weekend to recover from the stress of writing, presenting, pre-producing and shooting a couple of commercials. I had not planned on going out on that day—until my Plaridel dealer texted me about some items in his shop “that may be of some interest to me”. I usually dismiss nebulous messages like this—in the past, a dealer had sounded me off about “great vintage paintings” he had, but when I rushed to check, they were just awful paper prints.

When I got there, the first items I saw and, which I eventually took home, was this unusual set of busts representing the Immaculate Heart of Mary and Jesus, in a classic 1950s urna. 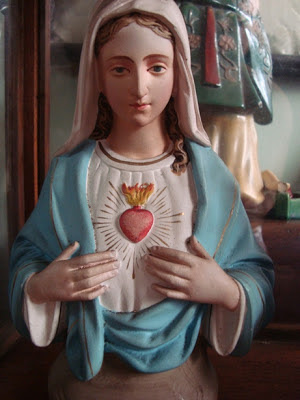 The busts, all of 8 inches high, are made of high quality plaster and they have retained their brilliant colors through the years. They are screwed onto the base of the simple, but well-assembled urna. 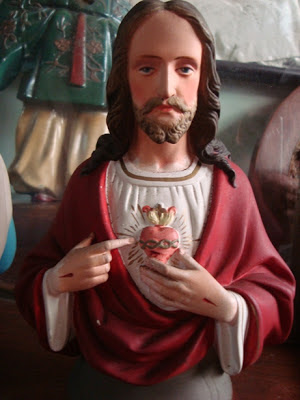 There are charming home-made flower decorations inside the urna, fashioned from cloth and plastic flowers, with small bottles and caps servings as vases. The backboard of the urna has been pasted on with various estampitas of Agony in the Garden, Virgin of Lourdes and Our Lady of Perpetual Help. 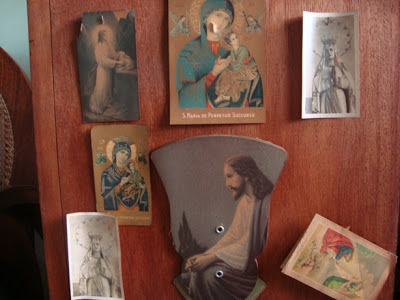 A souvenir fold-out paper fan commemorating the blessing of the Redemptorist Shrine in Baclaran in 1952 (and where Our Lady of Perpetual Help is the center of devotion) is also attached to the backboard. 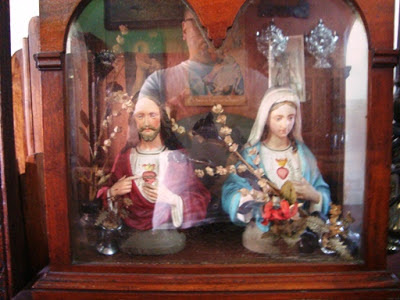 The excellent condition of the santos and the urna's contents attest to the care that the previous owners had for this private devotional piece and I am fortunate to have acquired it for such a reasonable price.
Posted by Alex D.R. Castro at 10:48 PM No comments: 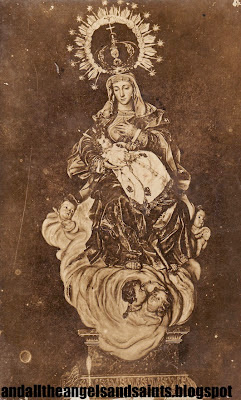