In a chapel in Bulacan, Bulacan can be found a small, ivory image of the young virgin-martyr, Sta. Ines (St. Agnes of Rome)—venerated by pious Bulakenyos and pilgrims from all over. But with the ardent devotion comes a warning—that the image must never be touched by menfolk in deference to her purity which she kept intact after being subjected to all sorts of torments and abuse. Even priests are no exceptions. 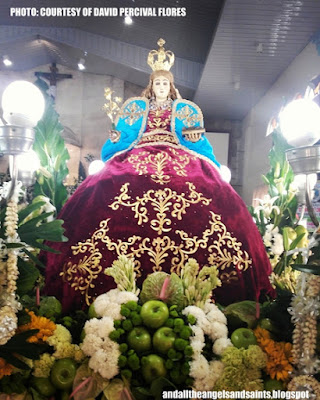 The ancient ivory image was found by a fisherman from Pariahan who was out looking for a good catch in the sea. The sea was soon enveloped by a thick mist followed by claps of thunder, lightning and a heavy downpour. In the midst of this tempest, the fisherman saw a mysterious glow at the far end of his boat. 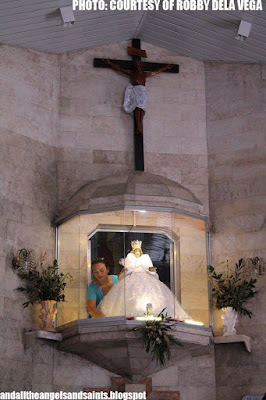 When he came nearer to inspect the light, the fisherman was surprised to see the image on a floating basin. He tied the basin to his boat and towed it for home. Upon sighting land, the fisherman attempted to lift the basin with the image and bring it ashore, but he could not even lift it. Other fishermen came to help him, but the basin would not budge. But when the women came to their succor, they handily and easily lifted the image safely to the shore. 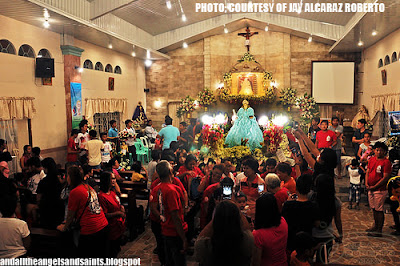 Considering the event as miraculous, the barrio people constructed a “visita” and put it under the patronage of Sta. Ines—a name that was on the book held by her left hand. Eventually, the saint’s name replaced “Pariahan” as the name of the barrio. 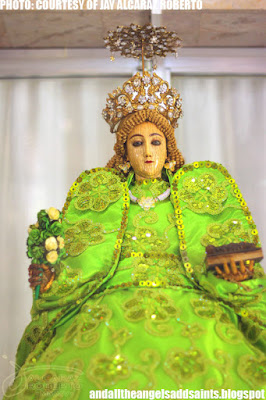 Then and now, the feast of Sta. Ines every 21st of January is marked with days of prayer capped by a procession. In the course of the 9-day novena, the petite Sta. Ines image is dressed indifferent vestments every day. 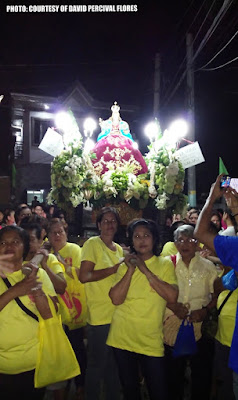 Twice the image is processioned—in the morning and in the evening—borne on a decorated anda by women, who also heap tributes of songs and poems to their beloved patron in a tradition called “Luante”. 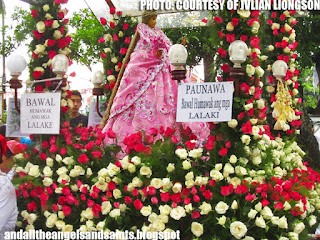 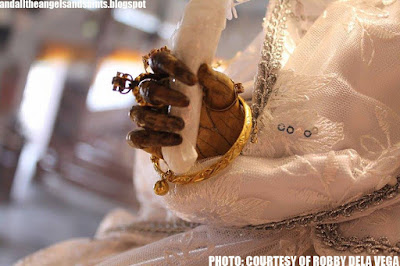 The antiquity of the Sta. Ines image can be seen in the fine lines on the ivory face. On her right hand, she holds an olive palm, a symbol of her martyrdom. 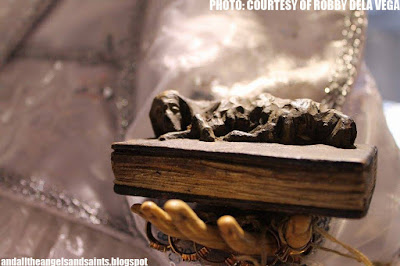 The other hand holds a book topped by a primitive lamb, which stands for purity. The story of the saint could be read at the “visita” where she is enshrined.

238. A SELECTION OF SANTOS FROM PHILIPPINE AUCTION HOUSES, part I

The leading art and antique auction houses of the Philippines were both founded 2010, Leon Gallery specializes in museum quality Philippine art--from Old Master paintings to modernist works of notable Filipino artists. It is a;so a purveyor of Philippine antiques, including Hispanic era religious santos, a selection of which are featured here. Salcedo Auctions, on the other hand, is the only auction house in the Philippines to specialize in the sale of fine art, jewelry, decorative arts and collectible accessories by leading local and international artists and artisans. Occasionally, the auction house also carries fine santos in its offerings.


All photos from past Leon Gallery and Salcedo Auctions catalogs.
Posted by Alex D.R. Castro at 4:42 PM No comments:

237. THE HOLY VIRGIN OF INSTANT MERCY, by Gene Cabrera 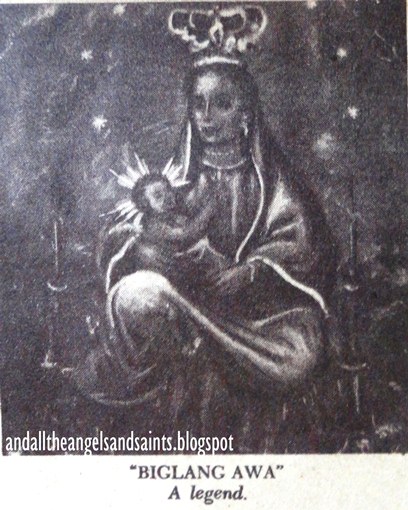 Pulilan is a town in Bulacan some 46 kilometers north of Manila. San Francisco is a small barrio of Pulilan.

Every first Sunday of Lent, throusands flock to San Francisco. From Pampanga, from Nueva Ecija, and provinces farther north come the celebrants. Manila faces are to be seen. They come to celebrate the feast of “Mahal na Birhen ng Biglwang-Awa”, that is “the Holy Virgin of Instant Mercy”.

The Biglang-Awa Virgin is an oil painting about 12 inches wide and 16 inches long. It is brought down from a small wooden house, then placed on an altar. People, young and old, kneel around the altar, praying.You can see the crippled, the sick, the blind, the pregnant women, the desperate. Another group sit in front of the kubol reading the Book of the Passion.

The procession starts. The Virgin is mounted o a small carriage. The devotees and a band follow. After the procession—the feast begins. All the food is contributed by people who believe in the Virgin. There are sacks of rice. Nearly everybody eats from banana leaves. A big plate is passed around. People give money. This happens every year in barrio San Francisco. Not even the Japanese occupation stopped the feast of the Biglang-Awa Virgin.

This is the story of the”Mahal na Birhen ng Biglang Awa", according to Claro Plamenco, whose family takes care of the image. 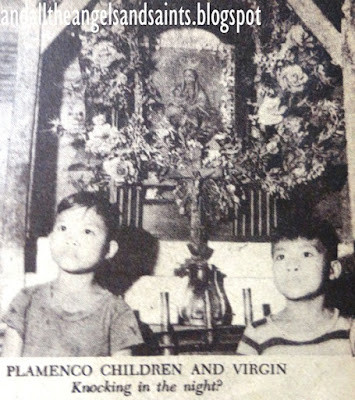 “Legend says that the painting as found many, many years ago. It happened like this. A group of Chinese were sailing in a big boat. Suddenly, a sharp object pierced the bottom of the boat,making a big hole through which the water gushed. Then the Chinese looked up to heaven and cried, “ Biglang-Awa! Biglang-Awa!” (Instant Mercy, Instant Mercy!). And the image appeared from nowhere, sealed the hole in the boat and saved the lives of the Chinese. Hence the name “Mahal na Birheng Biglang-Awa” or Holy Virgin of Instant Mercy.

“Mang Claro,” I interrupted, “ you said that the Biglang-Awa Virgin is miraculous. Now what miracles can you tell me that the Virgin has performed?”

Mang Claro told me about the old woman who came all the way from Gapan, Nueva Ecija. The woman was afflicted with a dreadful disease. She said that the Virgin appeared to her one night in her faraway town. She prayed in front of the Virgin. She rubbed her body with the coconut oil from the lamp of the Virgin’s altar. Then, she took a bath at a nearby well.

Mang Claro said that his children slept in the room where the lighted altar of the Virgin stood. That his children were constantly awakened at night by the “knocking” of the Virgin. Whenever the light of the small oil lamp was put out by a gust of wind---the Virgin “knocked”. The Virgin kept on knocking until one of Mang Claro’s children got up and lighted the lamp again. The Plamenco children testified to this “miracle”.

The image is painted on the surface of thin wood. The Virgin’s head has a crown of gold and is circled by eight small, shining stars.She holds on her right knee the Holy Infant. The edge of the Virgin’s mantle has a wide line of gold paint. TheVirgin and the Child are between two lighted candles. In the distance are Spanish galleons of old. The brush strokes are fine, the colors well-blended. Hues of red and brown dominate the painting with touches of flesh ochre.The paint is cracked, a sign of age. The artist? I could not find his signature. 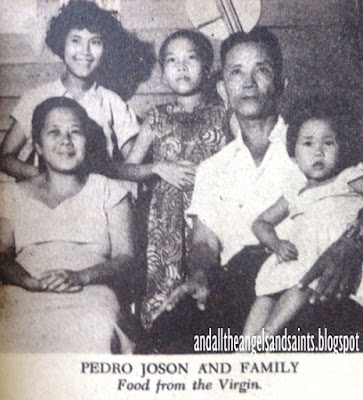 On November 3, this year, I went to Bambang, Pasig, Rizal. There, I found the owner of the Biglang-Awa Virgin. He is 52-year-old Pedro Joson. I confronted him with the declaration of Plamenco about the Virgin and her miracles. Joson denied the miracles.

“I do not know of any miracles. Ask the people of San Francisco.”
“Is it true that the left-overs after the feast of the Virgin, the food and the sacks of rice, go to you and your family?”

Joson admitted this but defended himself by saying, that as the owner of the Virgin, he was entitled to certain privileges.

“Look at me. Look at my family. Look at my house. We are poor. Many people made money selling images of the Lady Mediatrix of Lipa City.Many people are making money selling images of Our Lady of Perpetual Help of Baclaran. Me? I will never commercialize the image of the Holy Virgin of Instant Mercy. I would be rich if I did so. I am still a low-paid government laborer. I have seven mouths to feed.”

The Virgin gives him food.
That’s enough.
Posted by Alex D.R. Castro at 8:50 PM No comments: