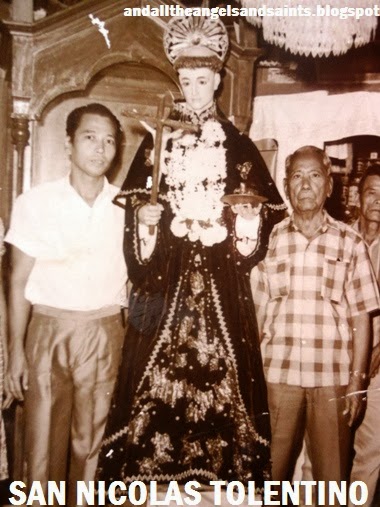 MIRACLE MONK. An almost lifesize image of San Nicolas de Tolentino from a Pampanga town is shown dressed, and ready for his procession, in this ca. 1970s photo,

Born in 1245 in Sant'Angelo, San Nicolas got his name from St. Nicholas of Myra, at whose shrine his parents prayed to have a child. Nicholas became a monk at 18, and was ordained as a priest,  seven years later. He became a well-known preacher and a confessor.

Around 1274, he was sent to Tolentino, near his birthplace. The town suffered from a civil feud between the Guelphs, who supported the pope, and Ghibellines, who supported the Holy Roman Emperor, in their struggle for control of Italy. Nicolas was primarily a pastor to his flock, tending the poor and the criminals.

As a wonder worker, he is said to have cured the sick with bread over which he had prayed to Mary, the mother of God. The "panecillos de saniculas", in the Philippines, is a cookie made from arrowroot, which is often given to sick people, in the belief that it will improve their wellness. The cookies undergo a ritual blessing before they are distributed.

San Nicolas died in 1305 after a long illness and was canonized by Pope Eugene IV in 1446. His iconography shows him wearing the black habit of the Hermits of Saint Augustine, with a star above him or on his breast. Some show his habit studded with stars. His emblems include a cross and a plate on which a roasted partridge was miraculously revived to life.

He is involed against fires and is the patron saint of the dying, sick animals, souls in Purgatory, babies and mothers. His Feast Day is September 10.
Posted by Alex D.R. Castro at 6:21 PM No comments: 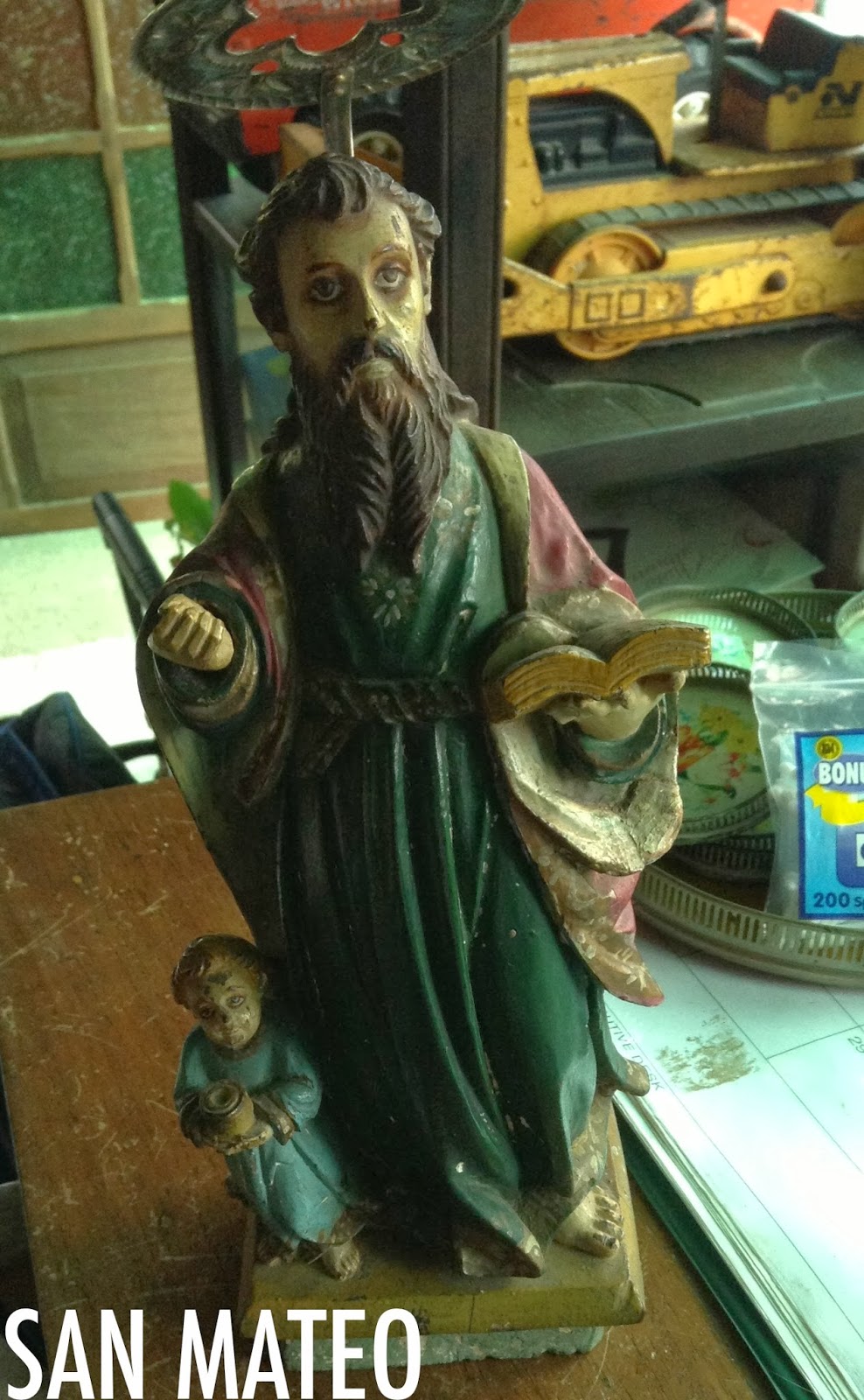 The image of San Mateo (St. Matthew) , one of the 4 Evangelists and one of Jesus's apostles, rarely is seen in home altars of yore in the Philippines. Many that I've seen are usually church images, comprising a collection to represent the 4 Evangelists--Matthew, Mark, Luke and John. So it was a delight to see this small, 15 inch wooden San Mateo, being unloaded by a collector through an antique shop.

San Mateo, author of the first Gospel, was the son of Alpheus and a Roman tax collector by profession at Capernaum. Nothing definite is known about his life, except that he was also known as "Levi". It is also uncertain whether he died from natural causes or was martyred--there are various accounts of his martyrdom, but it is not known whether he was stoned, burned or beheaded. 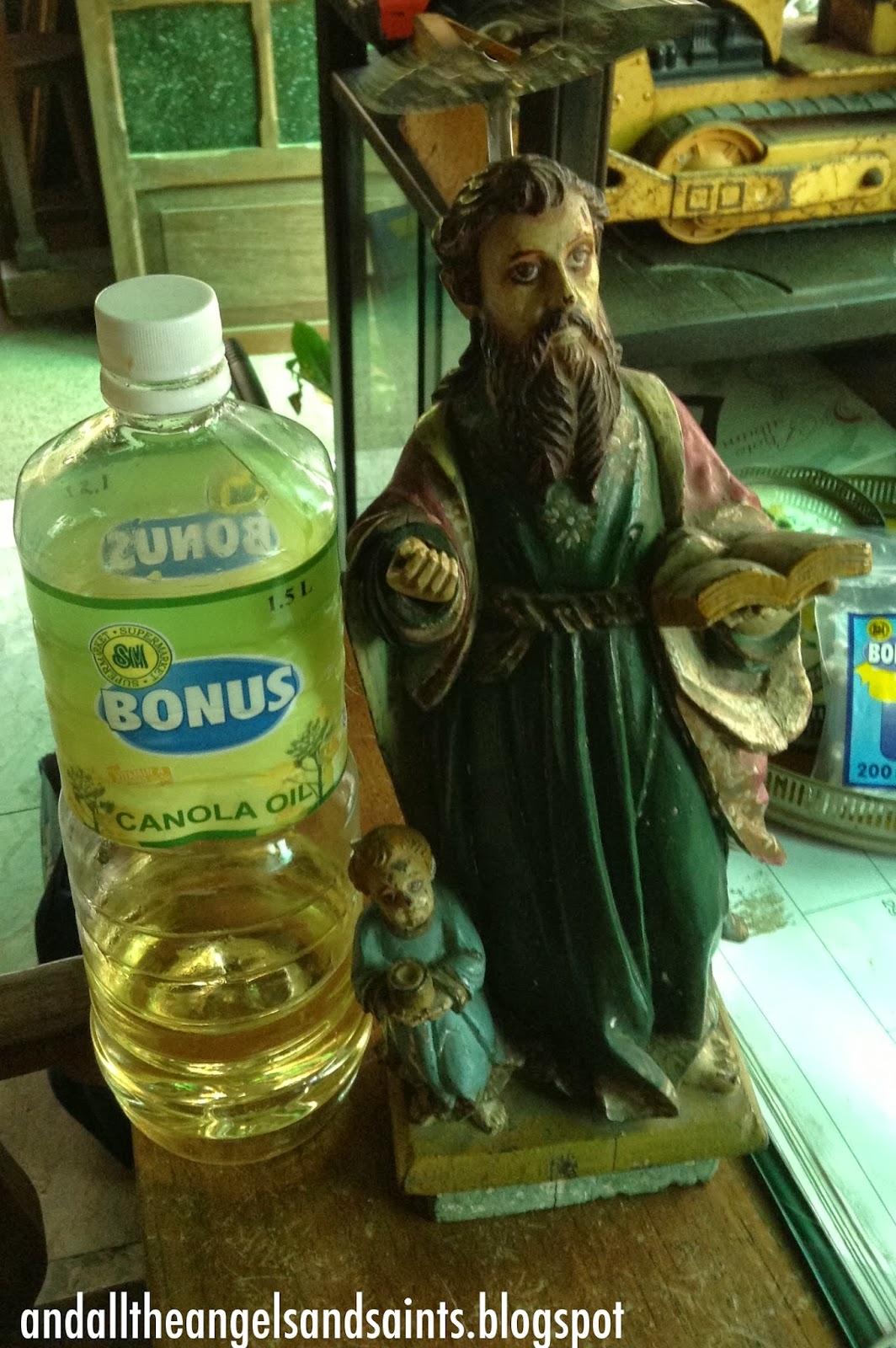 This santo, adheres to his traditional iconography--San Mateo holds a book to designate his authorship of the Gospel, and a money sack (now missing) in the other hand to denote his former life as a ta collector. A small angel holding an inkwell stands by his side to signify his new life as a messenger of Christ. The santo stands on a squarish damaged base. 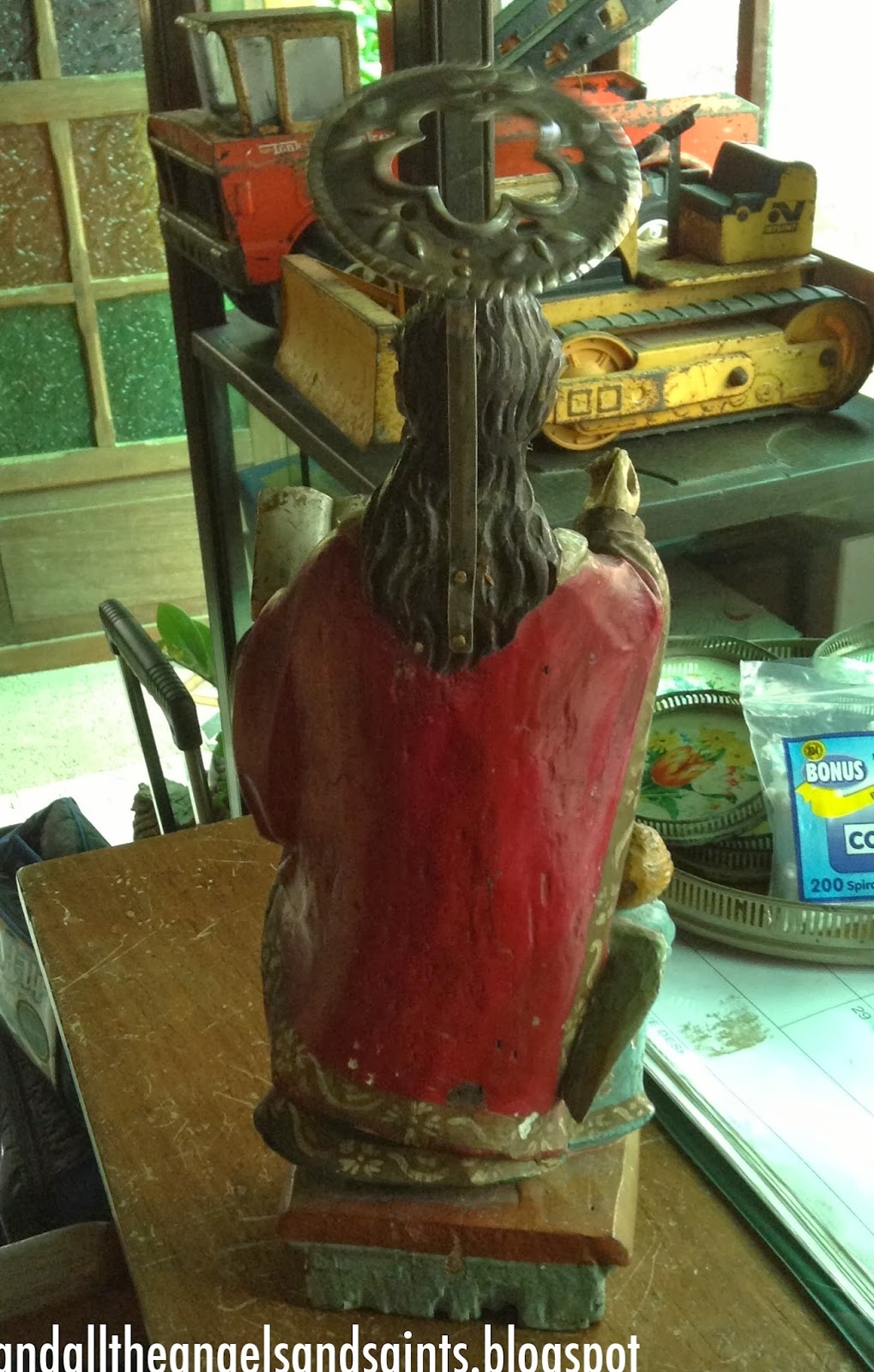 Based on the carving and painting style, this stocky San Mateo seems to date from the midcentury. The halo, which  looks original to the piece, looks more contemporary. Sadly, I could not afford this santo which came with a hefty price tag, so I had to look the other way. It was eventually sold to another willing collector.

San Mateo's feast day on the Western calendar is September 21. he is quite predictably, the patron saint of bankers, bookkeepers, accountants, money managers, stockbrokers, financial officers, customs officers, and tax collectors.
Posted by Alex D.R. Castro at 6:09 PM No comments:

187. STA. INES: From A Virgin Most Pure to a Virgin-Martyr

There are only a handful of wooden Sta. Ines images in the Philippines, so what more of ivory? In my years of going to antique shops, ancestral houses and heritage sites, I have seen many “santas” rendered in ivory, even those considered minor or not as well-known.

In one shop, I once saw a beautiful ivory Sta. Lucia in a virina, complete with a pair of silver eyes on a dish. I also remember seeing an unusual Sta. Rita holding a crucifix and a skull, flanked by her young sons, all in ivory. Most recently, a large Sta. Filomena, with gold accessories and regally-embroidered vestment surfaced in the market.

With the exception of the processional ivory Sta. Ines in Bulacan, I still have yet to see one for sale, be it from a shop or from a private collector. I’ve always taken a keen personal interest in the virgin-martyr saint, as I come from Barrio Sta. Ines in Mabalacat, known today as the Pampanga exit of the North Luzon Expressway (NLEX).


I like to believe that it’s also more than a coincidence that I was born on the feast of Sta. Ines—January 21—thus further underlining her significance to me. For years, in our small barrio, veneration revolved around a small Sta. Ines image owned by the Dela Cruzes, an old Mabalacat family whose ancestors founded the barangay in the 19th century. I’ve always been fixated on the ancient figure of the young santa, dressed in green with a palm leaf in one hand, and a primitive-looking lamb at her feet.


When I developed an interest in santo collecting, I told myself that one day, I will have my own antique Sta. Ines in ivory. But after years of waiting in vain, I was ready to give up—until a friend gave me sage advice – “ïf you can’t find one, make one”.


THE ORIGINAL LA PURISIMA. Found in a Fairview antique warehouse, this santa has ivory head and hands. It stood on a globe base and had a dispropotionately stunted body, which made it ideal for conversion into the child-saint, Agnes.

That opportunity presented itself when I found this small La Purisima Concepcion in a dealer’s warehouse, and which I acquired for a reasonable price. One look, and I knew the ivory headed-image with ivory hands was a perfect candidate for transformation into a Sta. Ines.


It had a young-looking, soulful face on a body that was a bit short—more teenage than adult, just the right size of I were to make a young santa representing a 14 years old. The Virgin had a manikin body, so it was easy for me to pose her in the attitude of Sta. Ines—one arm pressed to her chest to hold the palm of martyrdom, the other, holding a lamb.


There were a few things that needed to be changed—the globe base with the snake had to go. That was the easy part. But the vestments needed to be overhauled totally. 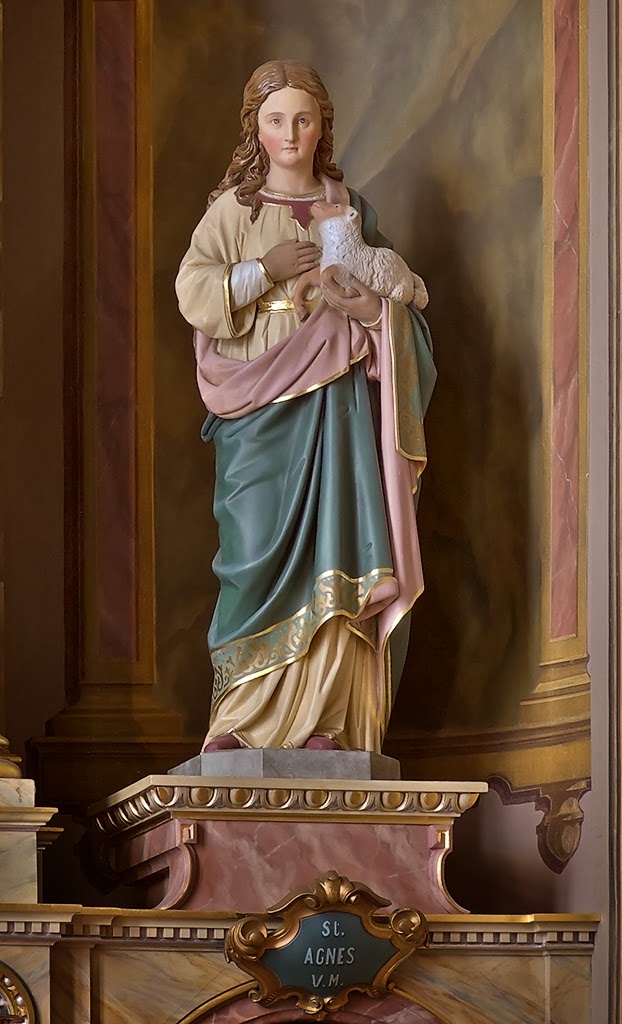 I took the Purisima to my restorer, bringing with me pictures and estampitas (holy cards) of the saint, for wardrobe color reference. 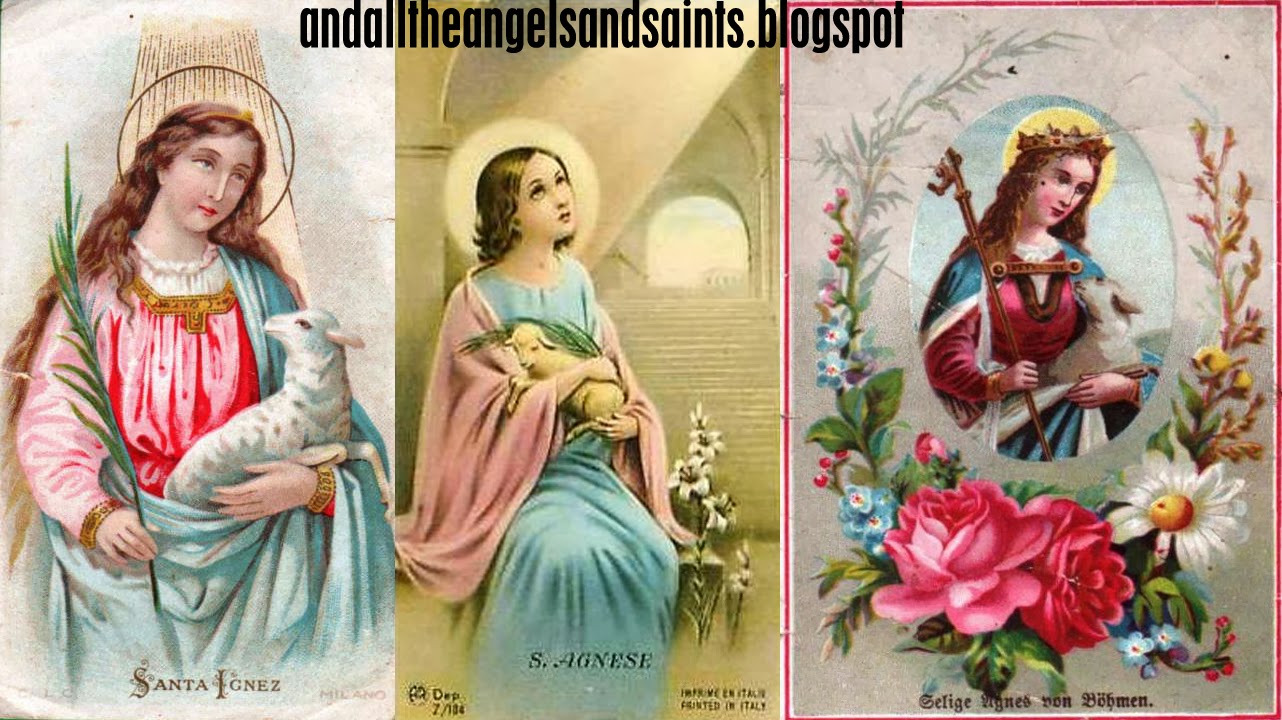 ESTAMPITAS OF STA. INES, show a consistency in the color depiction of her dress, which guided the restorer in the creations of the santa's vestments.

Most of our visual references assigned her the colors pink and blue green, so my restorer and I decided to work on those shades. Her vestments will only have minimal gold embroidery on the hems, with much draping to be done to simulate the rich folds of St. Agnes statues done in the round.


Months before, I had the good sense to buy tiny lambs and sheep of white clay, which originally formed part of an antique Nativity crèche. So, that solved what I thought was my biggest problem—tto find the saint’s animal attribute that also bears her name phonetically—Agnus, or lamb.


STA. INES AND HER EMBLEMS. The silver palm is actually a vintage silver brooch picked from a Mabini shop. The lamb is an antique creche animal figure.

The most difficult challenge turned out to be the search for a silver palm leaf—a symbol of the young saint’s martyrdom. I scoured ebay for a silver palm brooch, but came away empty-handed—either they were way too expensive or were not of the right shape and size.


But a week after the start of the transformation project, I dropped by at a Mabini antique shop and found an old but damaged silver brooch, that could pass off as a palm frond, as it had individual leaves. The size was also perfect! 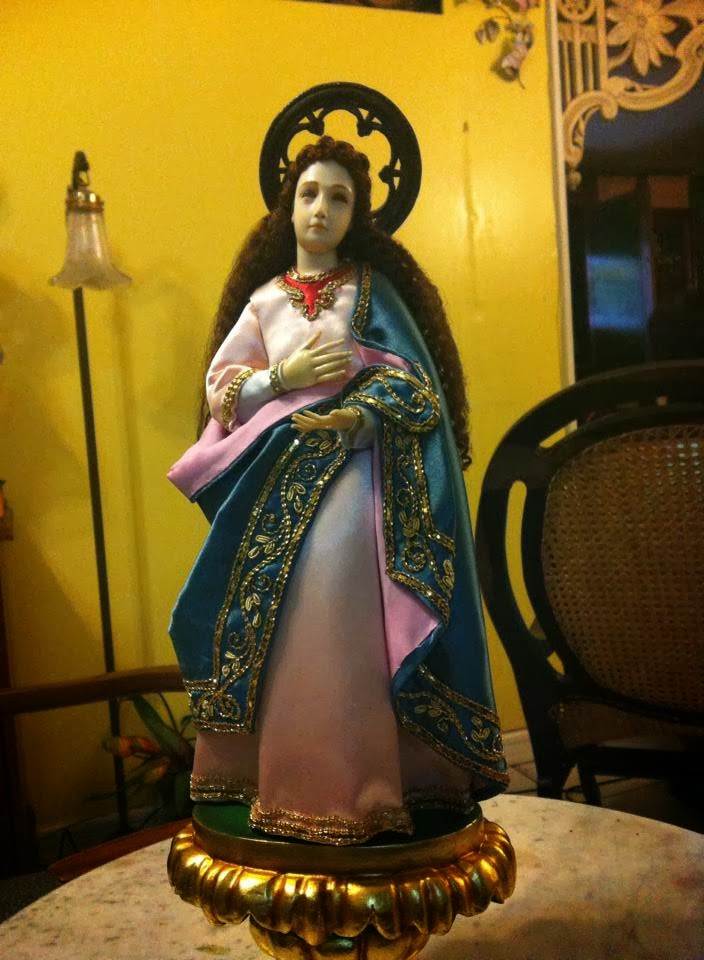 After a month of waiting, my Sta. Ines was done. When delivered, she was wearing a new jusi wig, crowned with an antique silver gothic halo that I found separately, standing on an oval gilded base, specially commissioned for her.


With the addition of the silver “palm” leaf and the tiny lamb on one palm, the santa-formerly-known-as-La Purisima looked every inch a Sta. Ines.