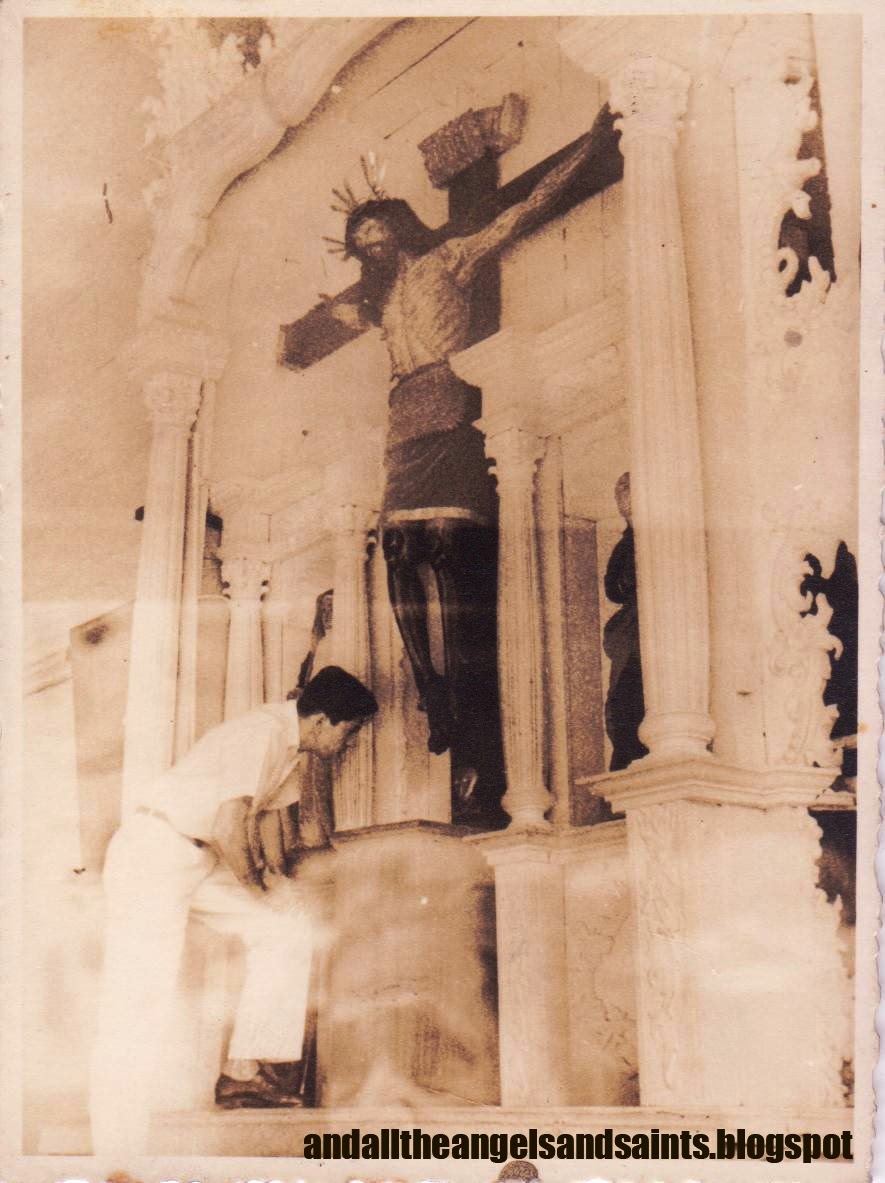 SANTO CRISTO DE PAKIL. The ancient image of the Crucified Christ in the church of Pakil, as it appeared in the 1950s.

In the Franciscan-founded town of Pakil, Laguna, one can find an ancient, life-size crucifix venerated at the altar near the church’s entrance. The present church itself, dedicated to San Pedro de Alcantara, dates to 1732, a masterpiece in stone marked with florid ornamentation. 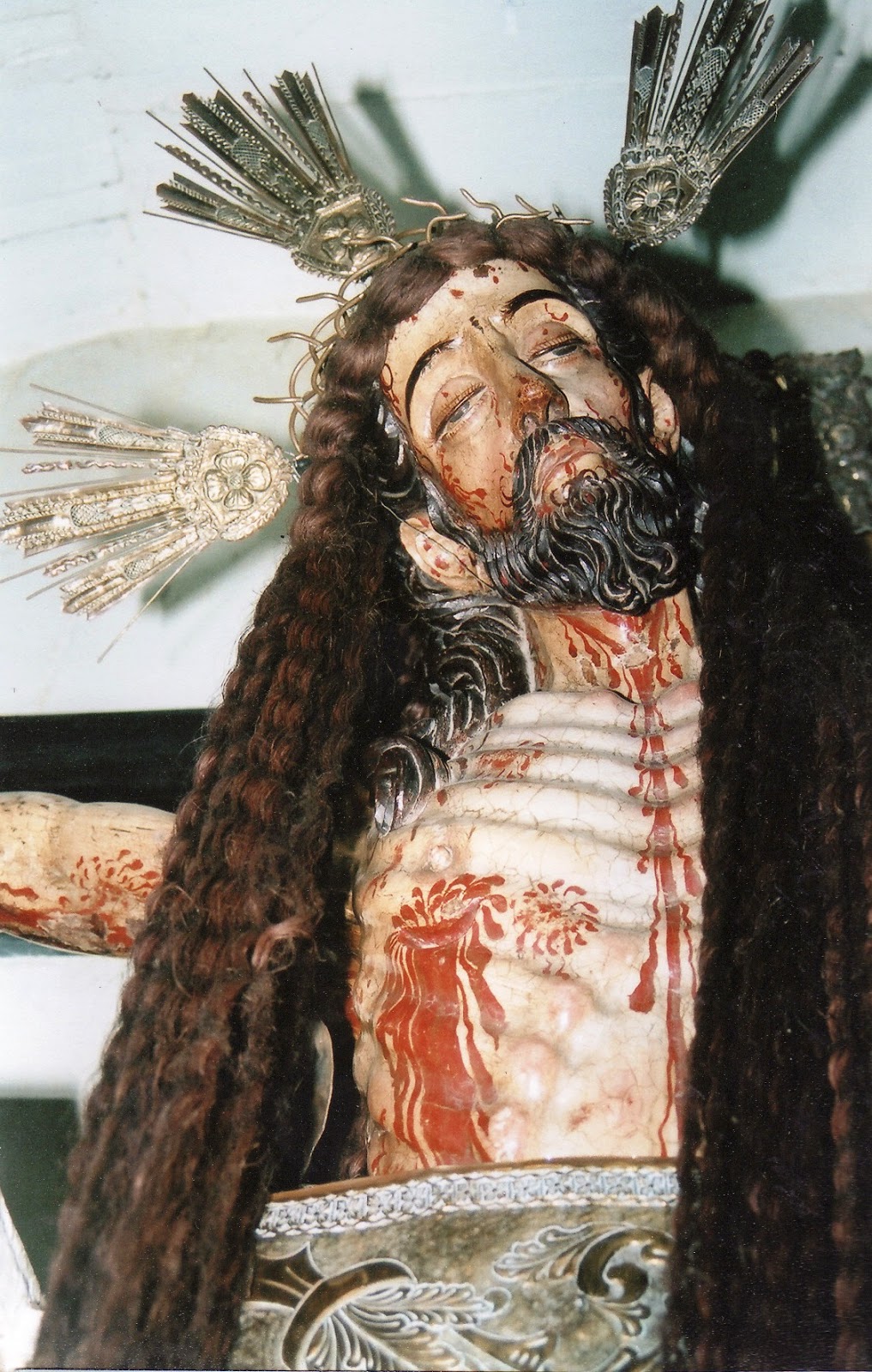 The Santo Cristo de Pakil is an object of deep veneration among residents, but is also popular among the devotees of the Virgen de Turumba. The legs and feet of the Santo Cristo have all but darkened with age, and the habit of kissing the feet and the anointing of the santo’s extremities with perfume has persisted. 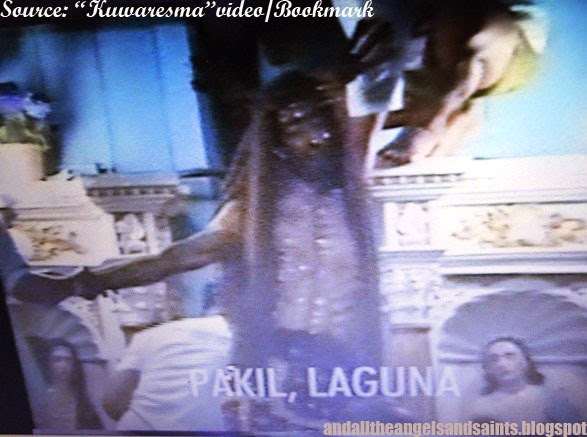 The origins of the crucified Christ in Pakil is shrouded in mystery. It was said that an old man sought refuge in the town, begging the cura to find sanctuary in the church. The kind priest allowed him in, and the old man requested that he be given some carpentry tools so he could do some work for the church, in return for the hospitality. 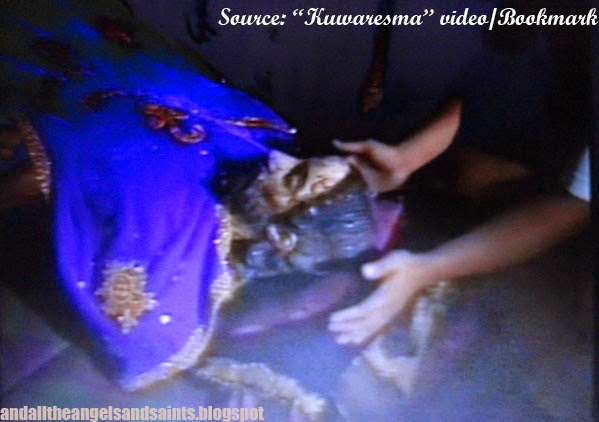 When the old man did not emerge from the room after some time, the door was forced open—and the priest found him gone. But inside the room was a splendidly carved image of Christ crucified, wonderfully wrought in wood and capturing the agony of the Lord in his passion. 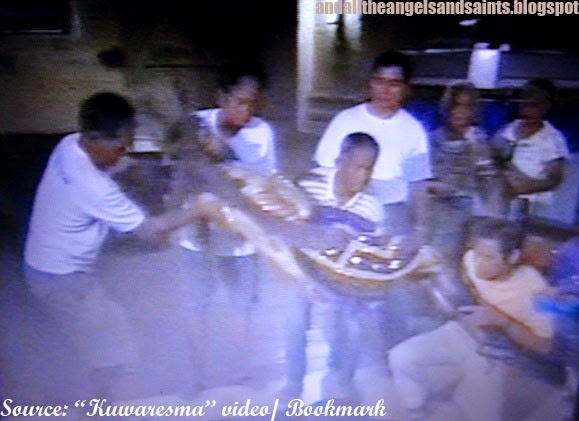 The image – known as Santo Cristo de Pakil—was enshrined in a retablo menor and is used every Holy Week for the Good Friday rites. As the arms are articulated, the figure of the Christ can be brought down from His Cross to be transformed into a Santo Entierro. 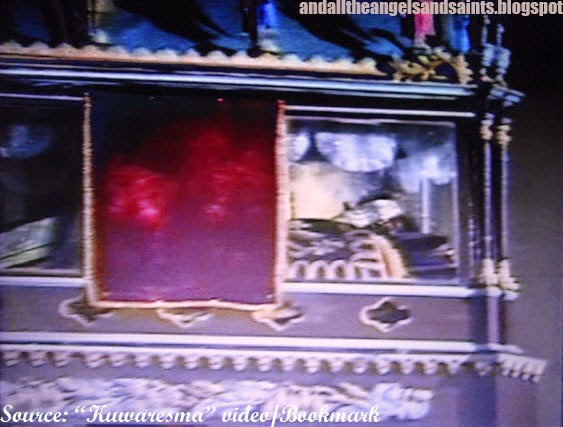 In this form, the image is processioned on the streets of Pakil, followed by a band of violinists, musicians, singers and hundreds of devotees.
Posted by Alex D.R. Castro at 12:43 AM No comments: 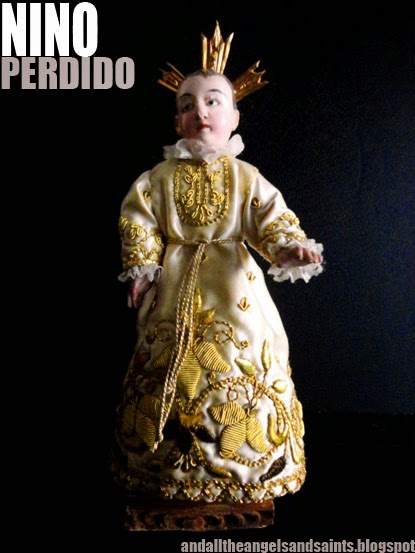 SANTO NIÑO PERDIDO. The lost Holy Child refers to an episode in Luke 2:41-52 when, at the age of twelve, he accompanies his parents to Jerusalem on pilgrimage. On the day of their return, Jesus strayed away from Mary and Joseph. The distraught parents returned to Jerusalem to find  Jesus three days later. The losing of Jesus is one of the 7 Sorrows of Mary.

When I discovered the world of ebay in the mid-1990s, I was amazed at its wide inventory of items for sale or for bidding. I was surprised to find a smattering of old colonial santos for sale, a few from the Philippines, but mostly—at least back then--from the Spanish colonial period of the Americas.

I could only drool and dream about these wooden antique santos as they were different stylistically from the local santos that I know. They were more doll-like, classically carved, and their coloration mimicked the healthy, pinkish skin tones of Caucasians. 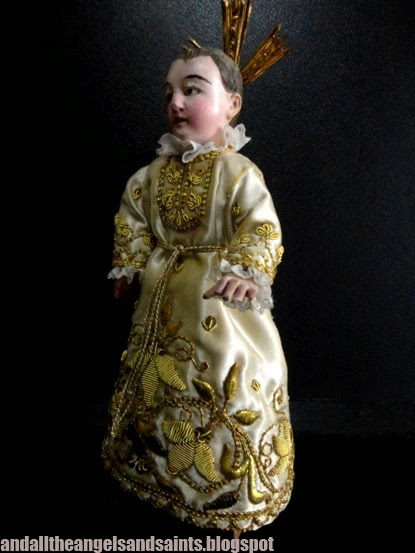 I still remember the early dealers whose ebay stores visited, like Historia Antiques which offered museum quality santos and a seller who went by with a rather sassy name—dkr-alliegirl. She always had santos in pristine condition for sale, vividly described and beautifully photographed for a willing buyer. But of course, the price tags kept me away from acquiring such treasures—until I saw this little 9.5 inch Christ Child on dkr-alliegirl’s site. 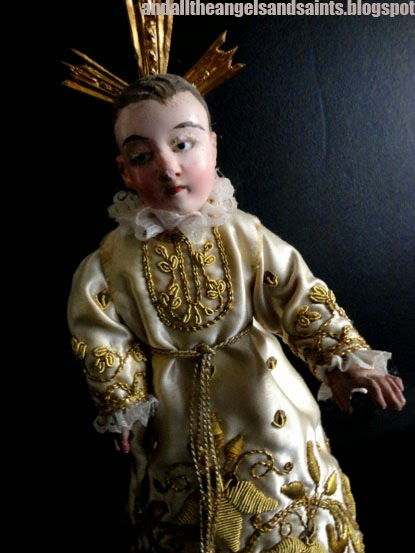 Advertised by the seller as a “Niño Perdido” (Lost Christ Child), it was delicately carved from softwood, with arms fixed,complete with finely carved fingers. The miniature santo stood on a simple rectangular base, and had painted hair and glass eyes. Noteworthy was santo’s original coloration which it has retained all these years—from his painted white body to the pinkish blush on his cheeks. 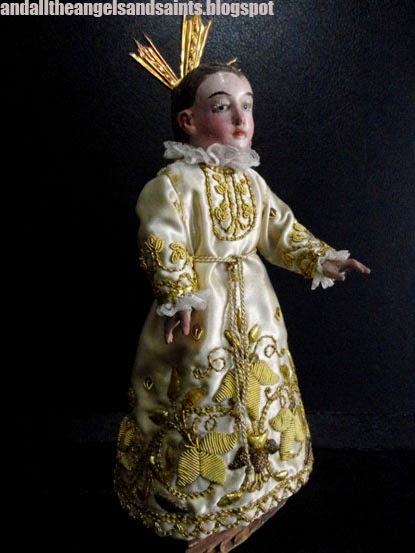 I am not familiar with the iconography of a “Niño Perdido”; for awhile I thought it was a companion piece to a San Jose, who was sometimes represented as walking hand in hand with the Child Jesus.

The ebay auction ended with the Niño attracting zero bids, and when next I looked, it was up for grabs at $175. This was when I made my move and contacted the seller, despite the price which I felt was still steep. It turned out that the seller was Deborah Richter, a formidable collector of Hispanic colonial art, and whose antiques have been loaned to exhibits and museums. 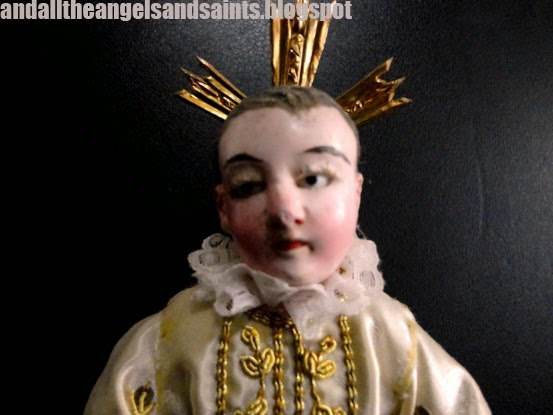 I tried coaxing her into selling the Niño to me for a lower price, but she was rather firm with her price. Eventually, with a sigh, I gave in and paid for the piece at the price she wanted, but satisfied with the thought that the provenance of this piece is impeccable, coming from American collectors of note. Years later, I would find Kurt and Debbie Richter’s pieces included in the book “Saints & Sinners: Mexican Devotional Art”, by Schiffer Publishing, which featured an antique ivory Virgin Mary in a virina, among others. 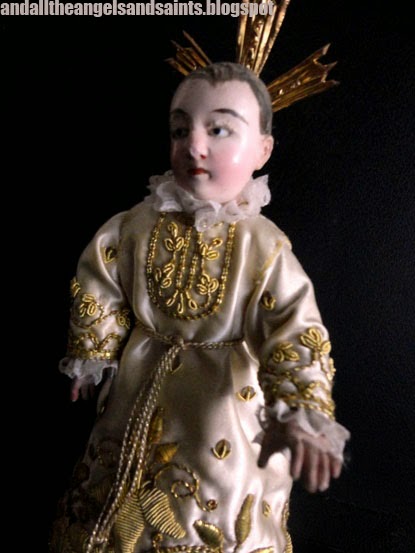 It took awhile for the santo to reach the Philippines from the U.S. But upon seeing it, I knew it was worth the wait, and the price! My first ebay santo purchase also turned out to be one of the first vestment projects of Dr.Raffy Lopez for me. He put together a satin ensemble heavily embroidered with floral patterns on the front and on the sleeves. Lacey cuffs and a collar, plus a one-piece brass tress potencias completed the Nino’s outfit. 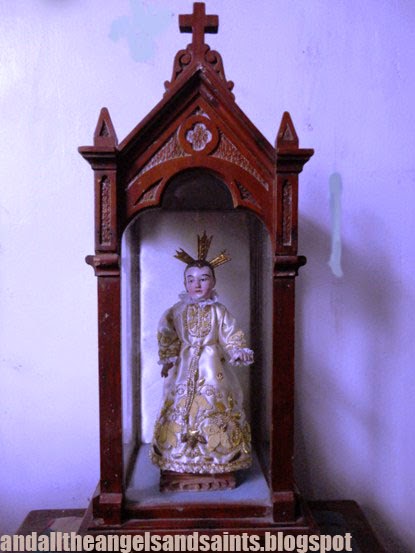 I found a suitable sized wooden gothic urna for my Niño Perdido, just 18 inches high. On a special altar in my living room, the Christ Child stands, ready to give his blessing to those who come in. It’s been a long journey from the U.S. to the Philippines, but the little boy lost has, at long last, found a new home, and I will be forever grateful for honoring us with His holy presence.
Posted by Alex D.R. Castro at 7:17 PM No comments: