One of the grandest churches in the Philippines is also one of the most visited in Manila—the San Agustin Church,  founded by the pioneering Augustinian order and the third structure built on the site. It was completed in 1607, based on the design of Juan Macias, and originally named Iglesia de San Pablo. Over the years, the colonial church suffered from the Bristish sack of Manila in 1762, and a series of destructive earthquakes that toppled one tower in 1880. It was turned into a concentration camp during the 2nd World War by the Japanese and sustained major damages, leaving the monastery in ruins. It was rebuilt after the war and the monastery was restored as a museum in the 1970s, which houses some of the most incredible ecclesiastical artifacts. The museum grounds are regularly utilized for exhibits of religious art, including the anique santo collection of noted collector Don Gregorio Araneta.
********** 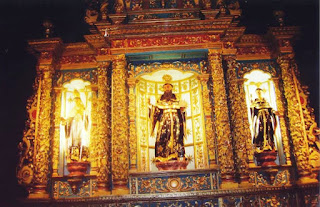 The venerable San Guillermo Church, in the former capital of the Philippines, Bacolor, is a beautiful legacy of the Agustinos who built the church in 1576 on land donated by Don Guillermo Manabat, town founder. Completely destroyed by an earthquake, it was rebuilt in 1897 by Fray Manuel Diaz.

The gilded retablo mayor, and the side retablos are intact—despite being half-buried in the lahar inundation of 1995 triggered by the Pinatubo eruption. They are profusely carved with baroque and rococo designs, and the richness of the details are better seen now that they have been beautifully restored. Inside the nichos are various antique  Augustinian santos from the colonial period. These, too, have been restored, repainted, and regilded under the supervision of the late Thom Joven, Pampanga’s most eminent ecclesiastical artist.

Now a tourist attraction, the San Guillermo Church continues to be a place of worship, a witness to the history and old glory of Bacolor, acclaimed for its arts and artists, hence the sobriquet—“Atenas ning Pampanga”-- the Athens of Greece. 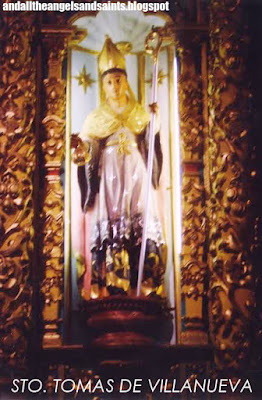 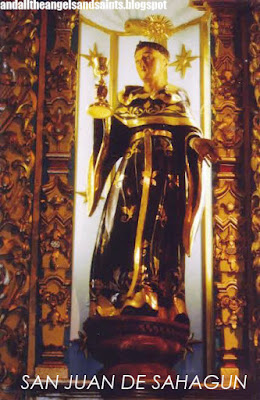 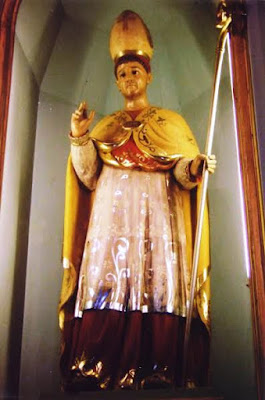 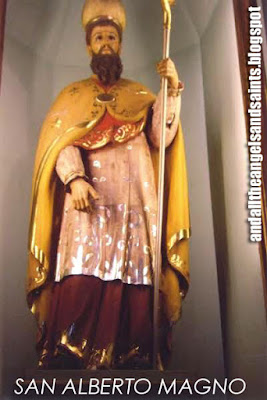 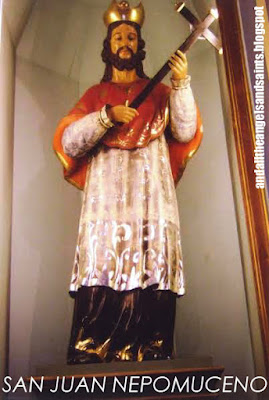 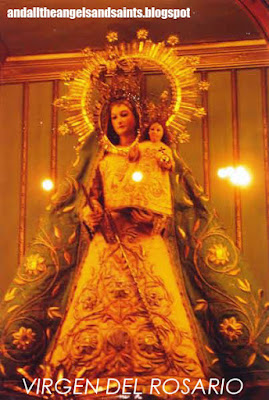 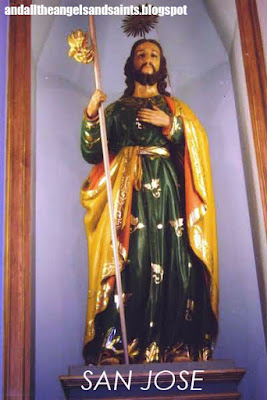 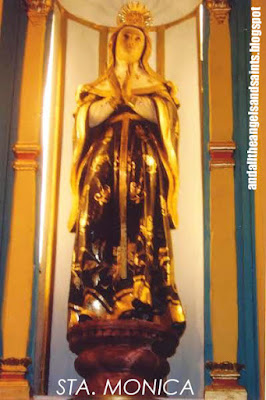 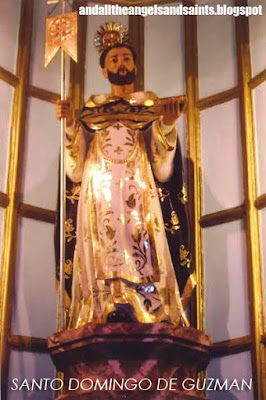 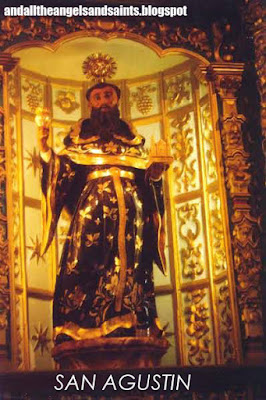 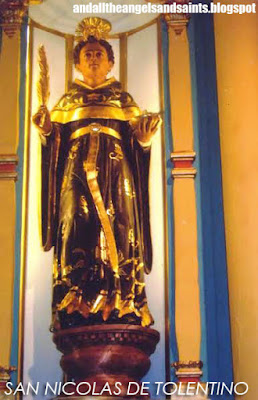 326. TATANG: THE SEATED CHRIST OF GUIMBA, by Fred J. Reyes

How “Tatang” Brought Peace and Prosperity to a Family in Nueva Ecija
In Guimba, Nueva Ecija, enshrined in a chapel beside a rice mill, is a life-size crucifix that has drawn throngs of devotees the past 6 years. People reverently refer to the fgure on the Cross as “Tatang”.

“Tatang” is no ordinary version of the Crucifixion. Unlike most other representations of the Holy Cross, Christ here is nailed on both wrists and feet. A block of wood juts out between the thighs, serving as a seat and propping up the upper portions of the body.

The most common crucifix shows Christ nailed on His palms and His feet, and His body pressed flat against the cross.

Some Biblical researchers say that this could not have been the way Christ was crucified. His nailed palms, they say, could not have been sufficient to carry the rest of His six-foot frame and would surely have been torn loose after a short time on the cross. Thus, the seat-like projection between His thighs, which the Roman soldiers as an afterthought, both to prevent the palms from being torn apart and to prolong Christ’s agony.

These researchers further say that the French sculptor who made the first such depiction claimed he had seen it in a dream. This crucifix is said to be known in many parts of Europe as “the seated Christ”. 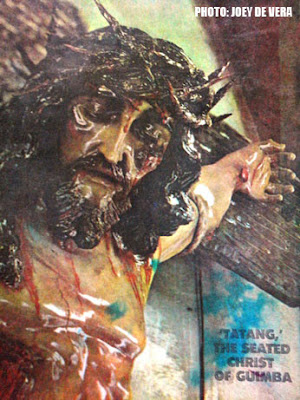 “Tatang”, as the seated Christ in Guilba is beter known among residents and visitors, was sculpted by a Filipino—Rey Estonatoc, who has a studio in Pag-asa, Quezon City. The wooden image shows so profound a suffering that many first-timer to the place, including wizened old men, have been seen crying unashamedly before it.

Rosario Divino Sta. Inez vda. De Santos, matriarch of the family which owns the chapel, says Tatang has brought peace and prosperity to her household and perhaps to hundreds of other people since His arrival there in 1978. She is particularly thankful for the change in the life of the youngest of her four sons, Fred, who she says was once a black sheep of the family.

Fred, she says, used to be unemployed but also was invoLved in some michief or other. “He used to bring nothing into the house but trouble, all kinds of trouble”.

At the height of Fred’s youthful escapades in early 1977, well-meaning friends succeeded in making him enter a cursillo. They had unsuccessfully tried to make him do so twice before.

When he finally attended one, he noticed, after a few sessions, a crucifix of the Seated Christ that had been brought into the cursillo house by a certain Delfin Cruz.

It was the first time that Fred saw such a crucifix and his curiosity was aroused.When he asked around, one cursillista, Jose Dijamco, told him that as far as he was concerned that was the faithful reproduction of the Crucifixion. Impressed, Fred made a vow to have a replica of the crucifix someday.

Two weeks after the cursillo, Fred became a changed man he ceased to be the troublemaker that his family used to know and now went all over the barrios of Guimba doing apostolate work. In one of his sorties, a friend came up to him to offer a wo-and-a-half acre farm for cultivation. “It was my very first job offer,” says Fred,”and I readily accepted.”

He had just finished planting the farm to rice when a kumpadre offered him 4more hectares for cultivation. Again, he accepted. “Kaya, eto, umitim na ako, kakatrabaho sa bukid”., he now says, calling attention to his deep tan.

The harvest in both farms was bountiful. He reaped 105 cavans to a hectare , which set him off to a good start in the rice business.For the first time in his life, Fred says, he found fulfillment: “So this is how it feels to sweat and get rewarded for your own labor”, he recalls saying to himself.

Still, something seemed lacking in his life. Often thinking about it, he soon began to have dreams about the crucifix, sometimes with the Virgin Mary floating with it in the clouds. When he recounted his dreams to Dijamco, who by then had become his spiritual adviser, the latter reminded him of his promise to acquire a replica of the Seated Christ. N Fred’s request, Dijamco eventually found a sculptor to make one for him.

The crucifix was finished in October 1978, and Fred, along with Dijamco and a close friend, Cris Ang, drove in a van from Guimba to estonactoc’s studio in Quezon City to get it.“A storm was raging then”, recalls Ang. “But on our way back, it seemed to have calmed down.”

He also remembers that the crucifix they brought back with them attracted lots of curious (and awed) onlookers along the way, so that they had to stop a number of times to enable people to take a close look. As a result, it took them 8 hours, instead of the usual 3, to get back to Guimba.

The crucifix also seemed to have grown heavier, according to Ang. Only 4 people were needed to load it into the van in Quezon City but when they arrived in Guimba, 12 pairs of hands had to bring it inside the chapel owned by Fred’s family.

Fred says his dream about the crucifix has never recurred since its arrival and he now feels completely at peace with the world. “I used to attend mass only 5 or 10 times a year and I stayed outside the church at that. Now I remember God through Tatang every day of the year.”

And instead of scaring people away during his days of mischief, Fred now seems to draw people to him—people in need of help, especially. But Fred doesn’t mind giving them help. “When you give to the poor, you’re fulfilling the tithe required by the Church.”

His mother, Rosario, who tends a small sari-sari store besides managing the family rice mill, says she is the happiest about the things that Tatang has done fro her sons and the rest of her family.

“We used to have every kind of problem, financial and other wise,” she says. “Now all these problems seem to have vanished. We’ve paid all our debts and sent our children to the best schools and have something lef to buy lands and other properties.”

Here 3 other sons—Renato, Oscar and Albert, who had their own “youthful flings” have also grown prosperous, apart from being law-abiding and God-fearing men. Oscar, a town councilman and military officer, assists at Mass every Sunday. A son of Fred and a son of Roberto are in the seminary, studying for the priesthood.

Tatang, for his part, has become something of an institution in Guimba. Every now and then, people attribute “little miracles” to him. Sometime, in 1979, when a rift divided the town’s cursillistas, the statue,  made of hard ipil,  reportedly developed a crack on the face, from the forehead to the bridge of the nose. The crack was said to have closed only after the cursillistas had settled their differences.

The chapel, while privately owned,  is open to everyone, and Fred says, that like him, countless other people may have been moved by the seated Christ to change their ways.

He attributes to tatang all the good things that have happened to him and his family. “He is as powerful as the man-God he represents.”

All that he prayed for, Fred recalls, was faith, fortitude and endurance in the “rat  race” of this world.
Posted by Alex D.R. Castro at 2:18 AM No comments: