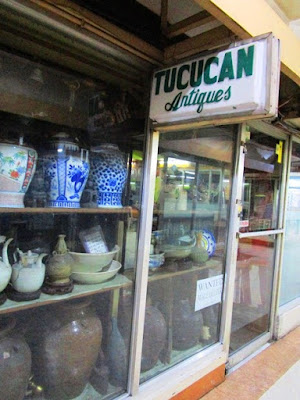 The antique fever that swept Manila in the 1960s and 70s prompted the rise of numerous antique shops in such places as Vigan, Lucena, San Pablo, Iloilo, Bacolod and Zamboanga.  Though old Vigan was a primary source of antiques, what became the major antique trade center in the north was Baguio City. After all, Baguio had a ready market for these fine collectibles, home to many affluent families with large homes, and hordes of out-of-towners and international tourists looking for one-of-a-kind souvenirs. 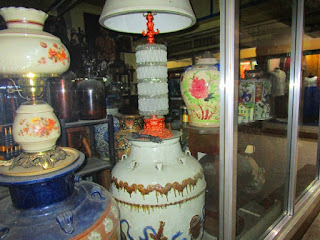 The modern Maharlika Shopping Center and Marbay Building that rose  in the city’s famous market district became the home of popular antique dealers, known even to Manila buyers. Dealers like Felipe Estacio, Eddie Marcelo, and  Alicia Serrano set up shops there. Estacio also had a big branch along the highway leading to Benguet. 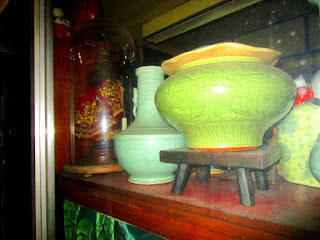 Pinky Garcia, a researcher who discovered early the marketability of ethnic antiques from the northern highlands like Kalinga furniture, weapons and bulols, set up her PNKY shop there. Daisy Gomes Locsin specialized in the black baskets of the Mountain Province that were a hit with American collectors. Soon, even Kapampangans like Francisco Lacap, trooped to Baguio to open their business in the summer capital. 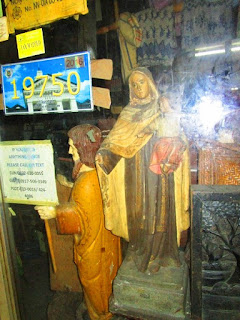 When I was a student in Baguio in the mid to late 70s, the Marbay shops were all crammed with antiques and artifacts of the most bewildering and amazing variety.  Wooden and ivory antos were sold alongside bululs and anito figures. Spanish colonial trinkets and tribal heirloom beads could be easily had for the right price. There were old Ibaloi costumes, headgear, tribal wear, silver and gold jewelry pieces, primitive clay ware. 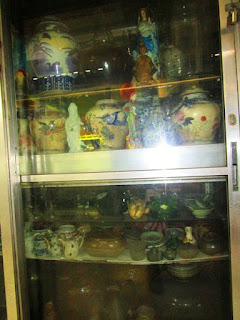 One would tire himself out just looking at thousands of Oriental plates, bowls, and jars, blue and white, Martabans, Sawankhaloks and Celadons. My interest in antiques was fired by my periodic visits to these stores, but alas, I could only afford the old gin bottles that were sold at 50 pesos each, discounted to 20 if you got more. Larger pieces like cabinets, almarios, tocadors and dining sets  could even be delivered for a small fee to Manila and any point in Luzon. 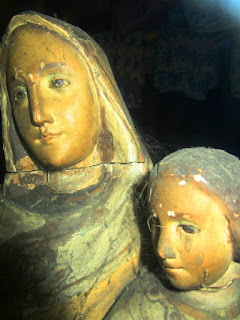 Even when I was already working in Manila, I would find time to drop by at these shops in the 1980s, during business trips. My last visit was in 2004, when I had to mount an event for a client at La Trinidad. With the antique trade dying in Manila, I knew it would not be long that Baguio’s supply would dry out too. 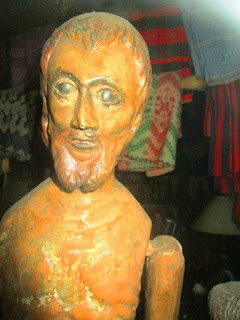 Fifteen long years after, I returned to Baguio for another short visit—and of course, I was surprised at the changes the city had undergone. The mountain tops were crammed with houses, the city overpopulated. Burnham Park was one big parking lot and Session Road  teemed with pedestrians. There were overhead walkway that covered the city's landmarks, and tall structures that hid the cityscape, and for a few minutes, I could not locate Marbay, 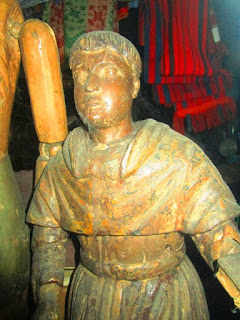 When I found it, I gave in to my urge to check my former haunts—and these pictures tell the sad story of Baguio’s antique trade. Less than a dozen hole-in-the-wall shops now populate the shopping center. I went there a little after 9 a.m., so many of the unites were still closed. I just peered through the glass walls and found a few genuine antiques sold side-by-side with many reproductions like furniture, Chinese ceramics and newly-woven baskets, cleverly aged with soot and wax polish. 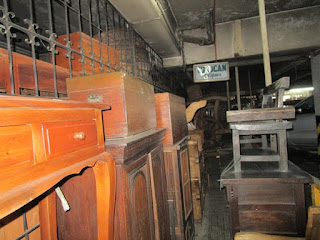 The most popular shops—Tucucan—where I got my first antique santo for 90 pesos sometime in 1978—was still there, with a large stockroom on the upper floor, mostly reproduction antique furniture. Then, there was Globel’s Antiques, still hanging on, with an assortment of odds and ends. I looked around, but I could not feel the same skipping of my heart beat in my visits some 40 plus years ago, when the world and I were younger. 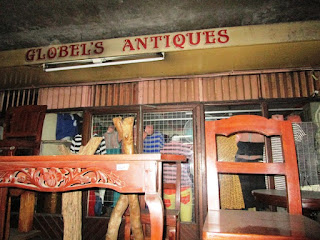 “All things must pass”,  Beatle George Harrison once sang, and I guess this is true for Baguio’s once bustling antique trade. It had its heyday, and I was glad and grateful for that vanished time, for “mine eyes have seen the glory”.
(ALL PHOTOS BY ALEX R. CASTRO)
Posted by Alex D.R. Castro at 2:02 PM 2 comments: