St. Catherine of Siena, (b. 1347.d. 29 April 1380), youngest of 25 children, joined the Third Order of St. Dominic and received the stigmata. She encouraged Pope Gregory XI to abandon Avignon for Rome, ending 70 years’ exile of the papacy from the city. Canonized 1461, Declared Doctor of the Church in 1970. Patroness of Fire Prevention. 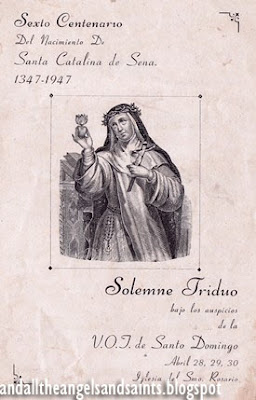 About The Image: The image of Sta. Catalina is housed at the Beaterio de Sta. Catalina. At the base of the image is inscribed: Donacion de la M.R.M. / Catalina de la Resurrecion/ Jez/ +13 unio 1853. This means that the image was donated before Mother Catalina died in 1853. When the Japanese destroyed the building on 28 Dec. 1942, the image was evacuated under the leadership of Fr. Francisco Sadaba O.P. of Letran. The air raid sirens threw the bearers in panic, who left the image in the street while they scampered for refuge at the Jesuit religious house in Intramuros. Eventually, everybody reached the University of Santo Tomas campus. The image is dressed in Dominicn’s habit. 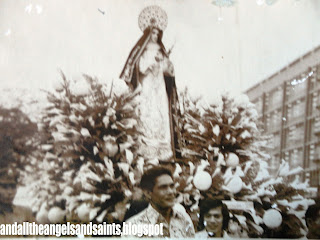 Attributes: Crown of roses proffered by Christ, chosen over a crown of gold, heart in hand, rosary, book (referring to her work) and lily, symbol of virginity.