301. My Guardian Dear: THE MAKING OF SAN ÁNGEL CUSTODIO 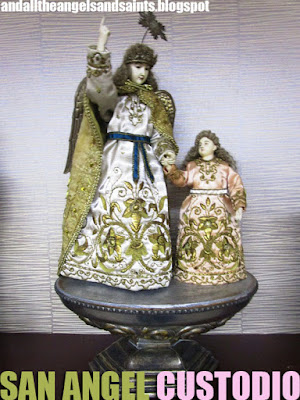 Who would think that this magnificent representation of the Guardian Angel--El Angel de la Guarda or Angel Custodio---was fashioned from old santo parts and new pieces by the noted restorer, Dr. Raffy Lopez?

A decade ago, a close friend of mine, Robby Tantingco, discovered the wonderful world of santos. As he was connected with Holy Angel University for many years, he explored the idea of having a santo of the Holy Guardian Angel, the patron of the school.

In fact, the university chapel houses the 1830 wooden image of  San Angel Custodio, which once belonged to the founder of Angeles, Don Angel Pantaleon de Miranda. The image—which shows the Guardian Angel holding the hand of a child, was passed on to a series of descendants, until it was inherited by Juan D. Nepomuceno (1892-1973), Don Juan was inspired to name the school he founded after the Guardian Angel, hence--Holy Angel University, now the largest university in Central Luzon.

The representation of the angel protecting children is common in Catholic imagery. In art, the Guardian Angel is shown with his right arm raised, with a finger pointing heavenward; he holds the hand of a child with the other.

However, images of the Holy Guardian Angel are seldom seen in the Philippines. Thus, the choice to have a San Angel Custodio as my friend’s first santo, was both appropriate and perfect!

It was serendipitous that I just bought an antique ivory head of a Virgin. Without a wig, the ivory head with glass eyes looked rather androgynous—just like the way that angels are represented. I convinced the first-time collector to invest on an ivory image for his very first santo, and I volunteered to supervise its reconstruction.

Off to Dr. Lopez the antique ivory head went, the only piece he would work with, at the start of the project. Guided by a picture of the original Holy Angel school image, he decided to make an ivory image copy of it. 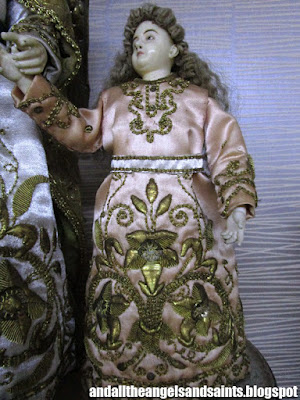 First, all the ivory parts missing were ordered for the Angel (a pair of hands)  and the Child (ivory head and hands), all made with pre-ban ivory. These were assembled on wooden manikin bodies, and when done, the Angel stood 12.5” tall and the Child, 6” high.  The Angel only had to be retouched to make it look a bit  masculine, while the Child’s features were painted. 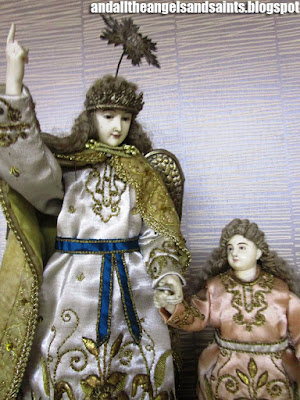 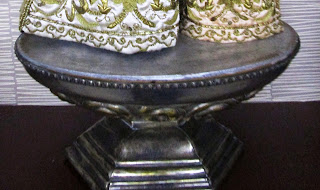 The mortar-shaped base with an oval top was a more stylized version of the antique silver base of the original school image. The cloud designs were hammered (‘pukpok’) on brass panels, that were then silver-plated and attached to the wood base. 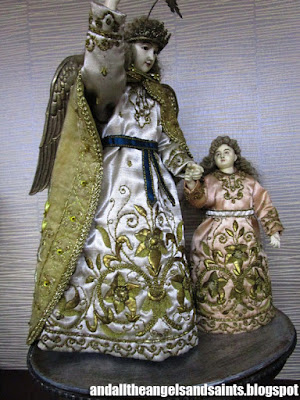 When the costumed images were staged and finally set on the base, the result was a new, beautiful San Angelo tableau, which, though not 100% antique, is definitely worth as much for the new santo owner, what with the amount of effort, care,  and labor of love that went into its making.  Ever this day, his very own Angel Custodio will certainly be by his side—to light and guard, to rule and guide! 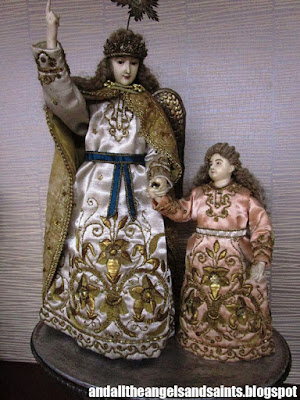