The first santo figure that heads the Holy Week processions in the Philippines is the image of San Pedro. His name in Greek means “rock”. Saint Peter or Simon Peter is one of the twelve apostles of Jesus, and acknowledged as the Prince of the Apostles and the first Pope.


The son of Jonah, San Pedro was born ca. 1 BC in the village of Bethsaida in the province of Galilee. His brother, San Andres (Andrew) was also an apostle.


Originally a fisherman, San Pedro was assigned a leadership role by Jesus and was with him during important events such as the Transfiguration. He was part of Jesus' inner circle, saw Jesus walked on water, denied Jesus, was restored by Jesus, and preached on the day of Pentecost.


He is said to have been put to death by crucifixion at the hand of Emperor Nero in Rome, possibly in 67 A.D.  Since he deemed himself unworthy to be crucified in the same way as Christ, the cross was positioned upside down.


San Pedro is portrayed in Philippine images as an oldish man having  a short, square beard with a tuft of white hair on his bald pate, curled at the center of his forehead. In antiquity, he was depicted with a full head of hair.


His primary attribute is a pair of keys, referring to Christ's words to Peter in Matthew 16:18-19, "I will give to thee the keys of the kingdom of heaven."  There is a gold key to open the heaven and a silver key to open the gates of hell. These are shown either being held by the saint in one hand or shown hanging from his waist.

San Pedro also often has a book, a reference to the two New Testament letters ascribed to him. When not holding his attributes, he is shown with clasped hands, in a prayerful pose.


San Pedro's triple denial of Jesus is one of the most common narrative images involving the saint and is symbolized by the presence of a rooster (“manok ni San Pedro”), which crowed thrice every time the fearful saint denied the Lord. The rooster is shown standing separately on a pillar, or placed by his feet.

In Bulacan—in the towns of Bocaue, Marilao, Sta. Maria and Meycauayan—a machete-holding San Pedro comes out during Holy Thursday processions, in reference to his protecting Christ from the guards who had come to arrest him in the garden of Gethsemane. The “tabak” he wields recalls the faithful apostle’s attempt to cut off the ear of Malcus. The next day, Friday, the hands are replaced with clasped hands. 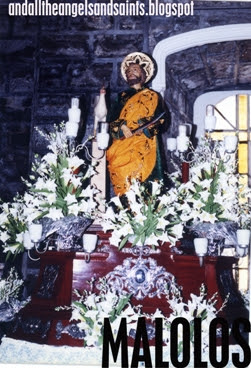 His feet are bare or sandaled and his garb almost always consists of a long, sleeved tunic in green, matched with a deep yellow mantle draped over his shoulders. 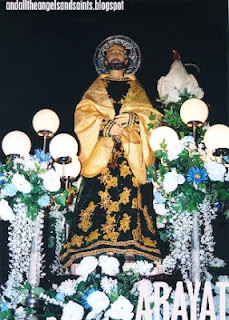 A back-to-back exhibit will open at the Museo de Santo Domingo in Quezon City as part of the celebration commemorating the centennial of the canonical coronation of Our Lady of the Rosary, La Naval de Manila, as Patroness of the Philippines. The fourth and fifth in a series of exhibits will begin on March 10 and 24, respectively. 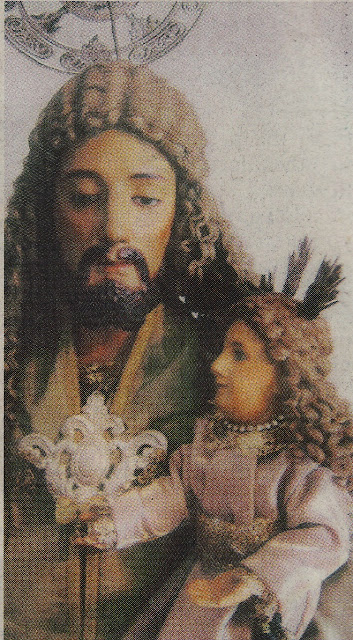 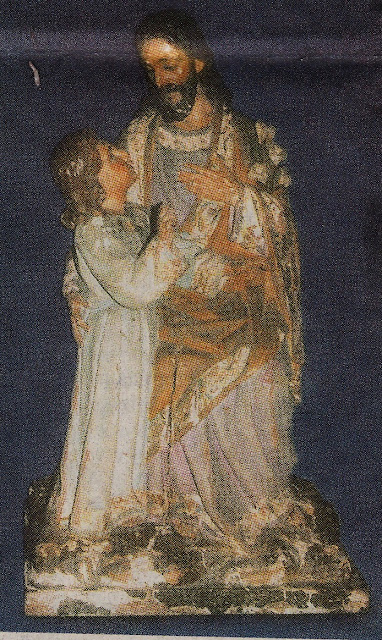 SAN JOSE, from the collection of Rei Nicolas.

The special veneration of St. Joseph began in the east where the apocryphal "History of Joseph" enjoyed great popularity in the fourth to the seventh centuries. In the ninth century, Irish Felire of Oengus, a commemoration is mentioned, but it was not until the 15th century that the veneration of St. Joseph in the west became widespread when his feast day was introduced in the Roman Calendar in 1479. The devotion was particularly popularized by St. Teresa of Avila and St. Francis of Sales.

The chaplain of the shrine, Rev. Fr. Roberto Pinto, OP will open the exhibit on March 10, at 4: 30 p.m., with a blessing of the information lobby of Santo Domingo Convent. The exhibit runs until March 19. 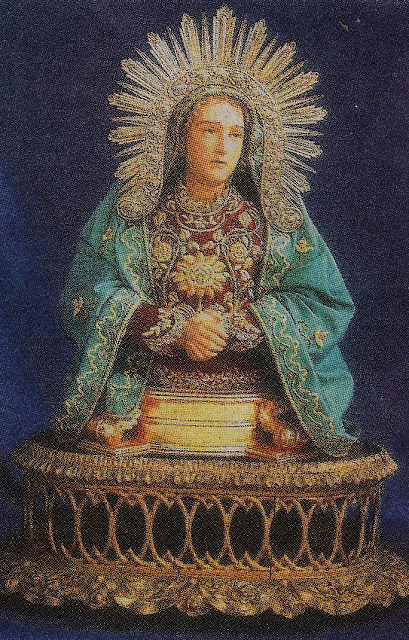 The fifth exhibit, "Misterios Dolorosos" will open at the Museo on March 24 and will run until April 6. It highlights the rosarian character of the Sto. Domingo Church, with rare images, icons, photos and prints of the suffering of Christ and the Mater Dolorosa on exhibit.
Posted by Alex D.R. Castro at 4:57 PM No comments: 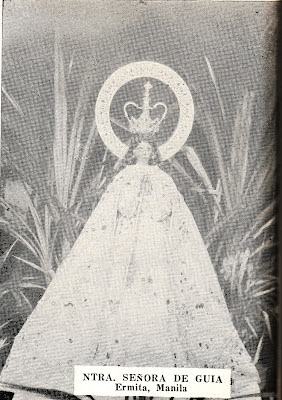 Ermita in Manila is the site of a shrine dedicated to Our Lady of the Way, represented by what could be the oldest Marian image in the Philippines. The image of "Birhen ng Patnubay" (or Ntra. Sra. de Guia) is a small wooden image found on the shores of Manila on 19 May 1571 by a Spanish navyman who came with Miguel Lopes de Legaspi's expedition.

Its strong resemblance to the Santo Nino of Cebu leads us to believe that it must have been brought to the Philippines by Ferdinand Magellan, who made an earlier voyage in 1521. The image was discovered atop a pandan bush, while being adored by natives in a pagan ritual. The image was taken by the Spaniard amidst great rejoicing, and from that day on, it was said that the Virgin "began to shed the rays of her charity i ever so many miracles which she wrought in behalf of the people at large and the Navigators". Thus, she was given the title of "Virgen de Guia" (Guide) and named as the protector of the galleons in Castille.

Like the Santo Nino, the De Guia image is believed to be of 13th century make, with a style characteristic of Flemish carvings. She is shown with clasped hands, with palms facing each other, wearing a large bejewelled crown and halo. It rests on an elevated base trimmed with pandan leaves, in direct reference to how it was seen upon Her discovery.

On 9 August 1758, the Spanish king declared the Ntra. Sra. de Guia as the "sworn patroness" of the city of Manila. The image survived the pillage of Chinese, earthquakes and the catastrophic effects of the last World War. It was sealed in one of the niches of the crypt of the stone church and was dug up only during the Liberation, placed under the care of a Taft Avenue resident until it was safe to enthrone her at her shrine where she has reposed ever since.

The image was canonically crowned on 30 December 1955 by Archbishop Egidio Vagnozzi and was  blessed by Pope Paul VI at the Manila Cathedral on 27 November 1970. 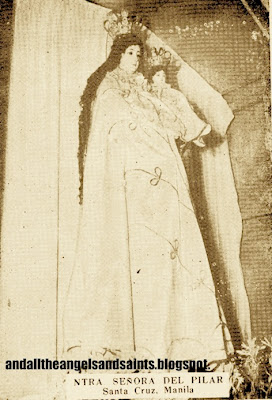 DEL PILAR VIRGIN, as she looks in 1954, enthroned at the Sta. Cruz Church, Manila.

The original Virgin of the Pillar resides in Zaragoza, Spain. The one enshrined in the Sta. Cruz Church in Manila is a replica of that statue, bought to the Philippines by Jesuits before 1768.

“La Pilar” has ivory head and hands, mounted on a carved wood beauty. She holds the Child Jesus, made entirely of ivory. The Mother and Child, which were once arrayed with radiant jewelry, sits on top of a pillar, based on a legend in which the Virgin appeared before St. James in that manner.

As early as 1743, a confraternity already existed in the district, thus the arrival of Virgen del Pilar made the devotion official. As a patroness of the Sta. Cruz district, she was the object of prayers, mid-day Saturday Masses and recitation of the Rosary. During novenas, the statue was mounted on a carriage and placed at the left side of the altar until after the procession.

During the second World War, it was taken from the baptistry where the image was kept and and stored inside a bank vault in the office of the PNB president, Juan B. Quintos.

Returned after the War, the Virgen del Pilar now occupies the right side altar of the Church, which has become a shrine of the Blessed Sacrament.