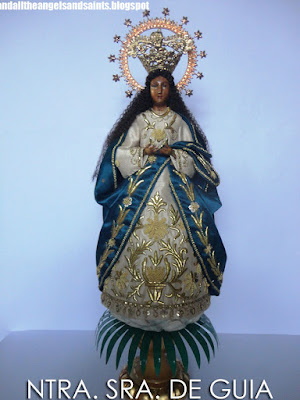 In my early collecting years,  I must admit I was guided by impulse more than judgment, when buying antiques. That is what happened around 1983, when I made a decision to purchase my first ivory santo, a brown Virgen from the ramshackle shop of Momoy Cabuenos on Arquiza St. which had been there on display for over a month.

It was not exactly what I wanted—it looked folksy, but definitely old—having browned with age. The solid ivory head was set on a crude body with wire armature arms, on which small “tinidor” brown ivory hands were attached. It had no base, and the old tattered, abaca-lined clothes came with the deal—Php 3,500—the exact amount of money in my pocket.

Had I been more patient, I could have saved more and could have purchased a better- looking santa, but at that time, all that mattered was this desire to have my first ivory image, period.

It took only a week or so, to realize the “folly” of my purchase, for as soon as I took it home, cleaned it, dressed it and affixed it on cheap-looking, gold-tinged base, I was, to say the least, disheartened. Even with a wig, a crown and a virina, the Virgin looked stiff and unappealing.

I usually take pictures of my santos upon their complete restoration, but not this image. I  just put it behind some of my more better-looking, classically-carved santas I acquired in the years that followed, and stayed in that relegated position for years.

When I became acquainted with the works of Dr. Raffy Lopez around 10 years later, I decided to show the image to him to see if there’s any way to give her some “character”, as she looked so plain and ordinary. Dr. Lopez was fascinated by the deep brown coloration of the image;  he even praised its naïve features and folksiness.

He then pored over his files and showed me a picture of Ermita’s famed patroness, the oldest Marian image in the Philippines—Nuestra Señora de Guia (Our Lady of Guidance).

History tells of its discovery by Legazpi’s men in 1571—the hardwood, 20 inch figure was found  resting on a clump of pandan leaves being adored by natives. It was assumed to have been left behind by Spanish missionaries who came to the islands earlier. “This is going to be your image”, he said.

It was a perfect choice, all things considered. What’s more,  the Marian title had a special connection to my hometown, Mabalacat. The Estado General of 1879 reports that the Mabalacat parish was elevated to a vicariate status under the titular patronage of  Nuestra Snra. De Guia most probably around 1836—so that sealed it for me. 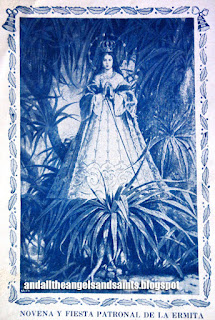 In  the next few months, Dr. Lopez undertook the conversion and restoration of the ivory image. The long, unproportional body had to go, and a new one was made. Features like eyebrows and lashes were added on to the brown ivory face.

A cloud base was carved, while a latero meticulously carve the pandan leaves from tin plates that were then painted green.The blue green cape and ecru tunic of satin were sewn, gold-embroidered with pandan leaf and floral motifs. A new set of crown and 12-star halo were ordered. Only the wig with its long, wavy hair was saved.

When the assembled image was presented finally to me after 2 months, I could not helped but be overwhelmed by its incredible transformation. The brown Madonna that I used to conceal behind other, prettier ivory santas now possesses a quiet, dignified beauty unlike any other, thanks to the guidance of Dr. Lopez.

Today,  in my little home, my Ntra. Sra. De Guia now stands centerstage in one shelf,  reserved for the most special and most precious santas in my collection. 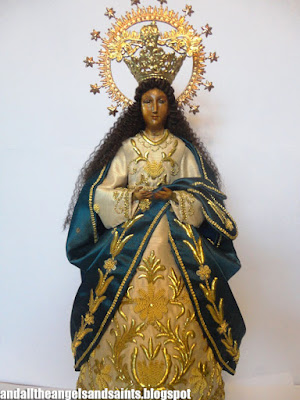 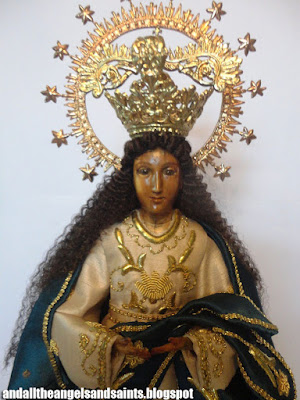 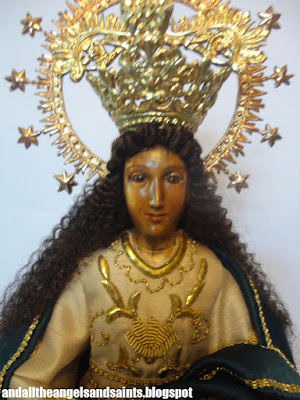 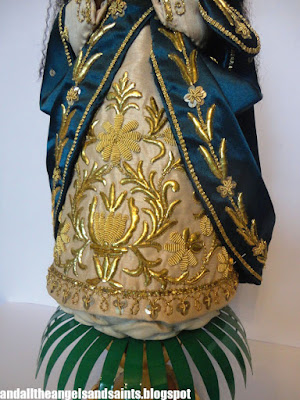 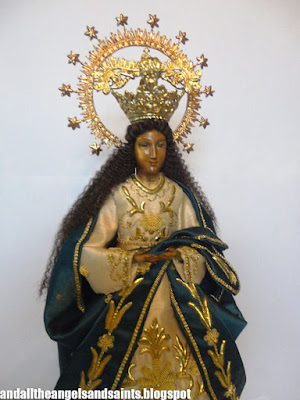 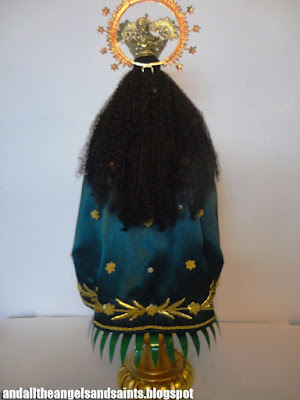 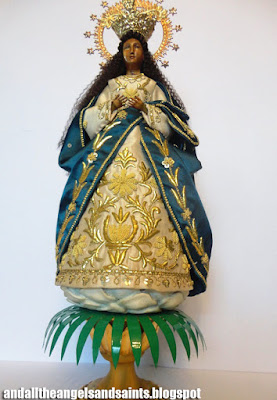 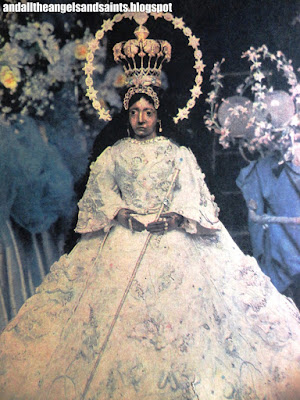 By Ileana Maramagpublished in The Sunday Times Magazine, 20 May 1962.

Still drawing a steady stream of pilgrims at this time of year is Antipolo, the small hilly town in Rizal province made famous as the shrine of the centuries-old brown Madonna as Our Lady of Peace and Good Voyage. 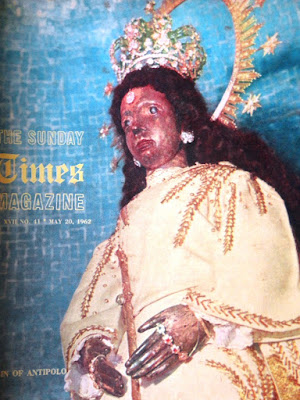 Antipolo, however, is not what it used to be. In the olden days, old folks like to recall, the place was no more than an isolated hamlet that could only be reached by carretela or cascos, via one of the Pasig River’s tributaries that wends its way to several Rizal towns. Thus, pilgrimages to the Virgin of Antipolo in those days were more hazardous and involved no small amount of sacrifice.Often enough, the pilgrims had ti hike the slippery trails of the region or cross the difficult terrain in man-borne hammocks. Aisde from this, the pilgrimages were made more festive by the bright parasols, colorful balintawaks and camisas de chino worn by the pilgrims, Today, the practice has all but disappeared; Antipolo is easy to reach via paved highways and modern-day pilgrims make the Maytime trek in buses or drive down the 28 km. road to Antipolo in snazzy cars,

From Manila, it takes no more than 45 minutes to reach the town proper, and once ed there, pilgrims converge at the modern church which is easily Antipolo’s biggest landmark. Once inside, one discovers that the age-old image of Our Lady of peace and Good Voyage is enshrined in a special niche atop the main altar.

Annually, on May 1st, by tradition, the Virgin is borne in solemn procession to an improvised altar atop Pinagmisahan Hill, where a mass is said to commemorate the first Mass celebrate by the early Spanish missionaries on the same hill. Devotees also mark the feast of Antipolo Virgin every first Tuesday of May.

Early historians report that the image was first brought to Manila from Mexico on June 29, 1626 by the then newly-appointed Governor General Juan Niño de Tabora to isnure the safe voyage of the galleons against pirates and typhoons. 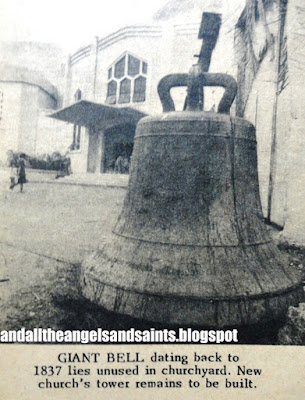 No one can tell exactly how the Virgin became enshrined in the town of Antipolo. There are two versions. One reports the image was taken to the Rizal town by the Governor general and Archbishop and crowned as Nuestra Señora de la Paz y Buen Viaje. Another account says the statue disappeared and was found perched atop an antipolo tree, on the same spot where the Antipolo church now stands.

Another legend tells of how the Virgin of Antipolo acquired its dark color. The story goes that during the 1639 Chinese Rebellion (which include Rizal and  Laguna towns), the Chinese burned the statue but somehow the image miraculously remained unscathed. Instead, the carving turned black and has retained its dark hue through the centuries.

When the Japanese commandeered the old Antipolo church and used it as their garrison during the last war, devotees smuggled the image, buried it in a drum, and later transported it to the Quiapo Church where it was enshrined until after the Liberation.
Posted by Alex D.R. Castro at 6:06 AM No comments: