CRUCIFIXION IN IVORY. A magnificent crucifix featuring the suffering Christ (in all-ivory) on the Cross, on a stoney mount decorated with shrubs and miniature glass figurines. The whole ensemble is encased in a virina.

There are two devotional articles that are considered indispensable in every Filipino home. One is a statue of the Blessed Virgin, and the other is a Crucifix. Since the early days of our Christianization, the crucifix--showing Jesus Christ crucified on the Cross--has been a sacred object of veneration, whether carved crudely from wood, fashioned from expensive ivory, or commissioned from a religious talyer in Quiapo.

Here then are different crucifixes of varied materials and styles, seen over the years in antique shops and dealers' stores, but all exalting the glorious death of Jesus Christ. 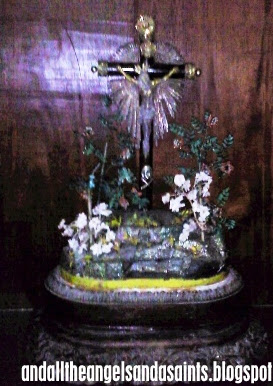 METAL CRUCIFIX. The corpus of Christ of cast metal is nailed on an ebony crosstrimmed with brass rays and finials. The cross stands on a wooden stoney base, that is encased in a glass dome. 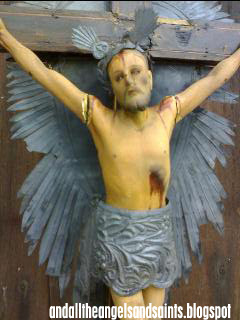 FOLK CRUCIFIX. The figure of Christ, with its original paint, wears a loin cloth and tres potencias of  beaten tin. The kamagong cross, too, features rays made of cheap tin. 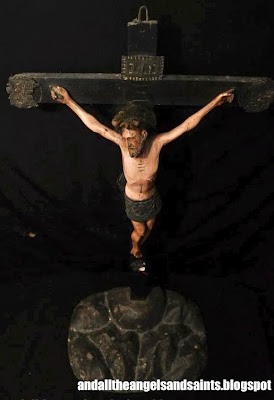 TABLETOP CRUCIFIX. Offered by an online dealer, this folksy crucifix shows a nicely-proportioned Jesus Christ mounted on a softwood cross, trimmed with simple cantoneras of tin.

CLASSIC CRISTO. A classically carved Christ, complete with glass eyes and etched loincloth of silver hangs on a kamagong cross. The bloodied figure is missing its rays and crown of thorns,

CRISTO MORIBUNDO. A wooden Christ, with his head down, hangs limp on a cross. It is handsomely attired with a silver loincloth with repoussed design.

NATIVE CRUCIFIX. A rather stiff rendition of Christ in wood, on a kamagong cross, has folksy features, but is splendidly arrayed in silver accessories, including the skull-and-bones at the foot of the cross.

ALTAR CRUCIFIX. A precious wooden crucifix is richly trimmed with beaten, gold-plated brass rays and finials. The wooden Christ wears a satin loincloth on which metal appliques have been sewn. The crucifix is housed in a 1920s urna.

PRIMITIVE CRUCIFIX. This naive crucifix must have been carved by an untrained artisan from softwood. It bears traces of paint and gesso.

HEIRLOOM CRUCIFIX. Made of fine wood, this crucifix shows a well-carved Jesus Christ that has kept all its important accessories thru the years--from its wig to its high potencias and polished silver loincloth. The kamagong cross is trimmed with beaten silver and is kept in a family urna.

VINTAGE CRUCIFIX. The wooden figure of Jesus Christ shows a well-carved physique, which is in sharp contrast to the simple cross on where he hangs. The rays of the cross are fashioned from tin.
Posted by Alex D.R. Castro at 12:14 AM No comments: 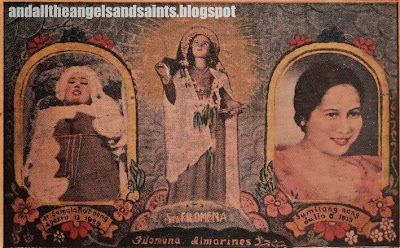 TWO FILOMENAS. Filomena Almarines (b. 1913- d. 1938), the incorruptible milagrosa, and the Sta. Filomena image enshrined in her tomb. The figure was donated by Filomena's childhood friend.

There is an image of Sta. Filomena (St. Philomena) enshrined in the tomb of a namesake from Biñan, Filomena Almarines. The two have nothing in common except a common name, but for the people of Laguna, their Filomena is also worthy of veneration as a saint.

Filomena Almarines was born on 6 July 1913 in San Antonio, a barrio of Biñan, Laguna, the daughter of farmers. She was said to be a saintly young woman, prone to introspection. At age 25, she died on 13 August 1938, some say, of emotional stress. She was buried at the Biñan Municipal cemetery.

When her own father died in 1947, Filomena’s tomb was opened with the intent of gathering her bones to give way to her father’s body. But great to everyone’s surprise when, upon opening her coffin, the workers found her body undecayed, her face as fresh as the day she was buried, and even her burial dress intact. 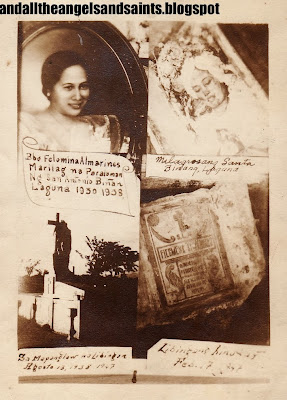 People immediately proclaimed her a saint, owing to her incorruptibility. Devotees trooped to her tomb, miracles were supposedly wrought (e.g. candles melted on her tomb to form the face of Jesus), and Filomena’s wonder-working powers were reported in American newspapers. Holy cards of “Sta. Filomena” were produced and sold as souvenirs to pilgrims from all over the Philippines who came to Laguna to visit the “milagrosa”.

A local cult quickly developed and persisted till the early 50s. A childhood friend of Filomena caused an image of Sta. Filomena to be carved, which was subsequently installed in her tomb.

Sta. Filomena’s own life story is clouded with mystery, starting with the discovery of the remains of a young girl in the catacombs of Priscilla in Rome, on 24 May 1802. The tomb bore the Latin inscription, “Filu mena”, translated as ‘daughter of light’. 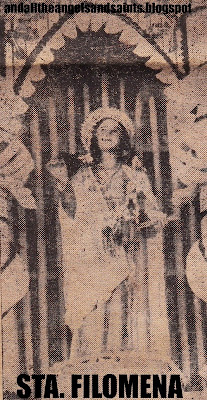 Over the years, Filomena’s life story was pieced through the 1833 visions received by Mother Maria Luisa de Gesu, a Dominican tertiary. Filomena came from a noble family; her father had been a prince. Converted into Christianity, the family went to Rome. There, she attracted the attention of Diocletian, whose advances she spurned. This resulted in her martyrdom.

Her image depicts that of a young girl, no more than 15 years old. She holds the instruments of her martyrdom: an anchor which was used to drown her to no avail, a pair of arrows pointing downwards, and a javelin. Sta. Filomena is the patron of young girls and is also invoked by those in desperate situations.

As for the Filipina “Sta. Filomena”, she continues to rest at the Biñan cemetery, now renamed as Sta. Filomena Cemetery.

Oldtimers and tourists intrigued by her story continue to pay a visit to the tomb of this “marilag na paraluman at milagrosang santa ng Biñan, Laguna: Bb. Filomena Almarines”.
Posted by Alex D.R. Castro at 4:35 PM 4 comments:


One of the most moving images processioned during the Lenten season is the image of a seated Christ, right after he was scourged, crowned and cloaked. It is a depiction of him right after Pilate brought Jesus out and presented him before the crowd with the words, "Behold the Man!" (Ecce Homo in Latin).


This image of Senor de la Paciencia (or Paciencia, as simply known in the Philippines) is just one of the many variations of the Ecce Homo representation. Some tableaus represent the entire scene -- with Pilate and his soldiers, a bound and bleeding Jesus in his crown and cloak, and a crowd led by priests.


Others present only the figure of a bound Jesus, either with the cloak and crown. Spanish and Latin American countries have a longer appellation for this seated Christ:  El Cristo de la Humildad y Paciencia (Christ of Humility and Patience). 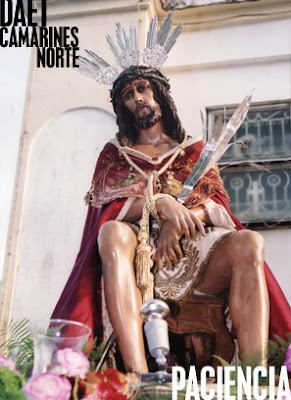 On a low stone seat an exhausted Jesus sits bound and crowned with thorns, wearing a loin cloth, a rope yoke, and a red or purple cloak and holding a reed scepter.In Mexico, people call these santos  El Dios or Señor de la Peña ("The God of Suffering").


Philippine images conform closely to this depiction of the Paciencia: local santos show the tired, sad Jesus seated with his hands on his chin, in deep contemplation of his inevitable fate that is forthcoming. His hands are often bound together, but there are representations that show him with hands free, with one hand holding a reed scepter as a symbol of mockery. 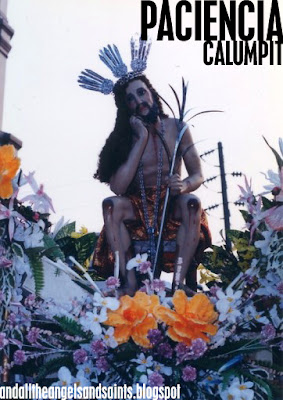 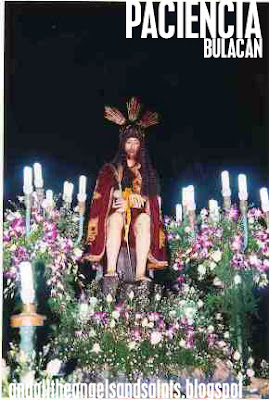 Shown here is a selection of Paciencia images--some antiques, some contemporary, from different parts of the Philippines.

(Photos taken by Dr. Raymund Feliciano and entrusted to the author)

171. MATER DOLOROSA: Heirloom Image of the Ocampos of Quiapo 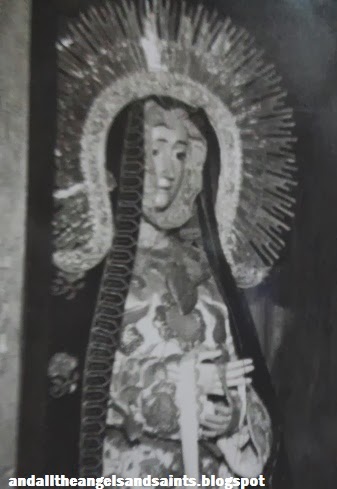 One of Quiapo’s well-known residents were the Ocampo Family. Jose Mariano Ocampo, a wealthy lawyer and realtor, owned a 1 hecatre property on both sides of the Estero de Quiapo. From 1936-1941, he built a Japanese-inspired tower of concrete, known to Quiapenses as the “Pagoda”. Ocampo was interested in Asian and Japanese culture, but he was a Catholic. In fact, he surrounded the Pagoda with a garden filled with cement statues of religious figures like San Agustin, Sta. Teresita de Nino Jesus and the Virgen del Carmen.

But the most prized possession of the family was the centuries-old image of their Sorrowful Virgin, Mater Dolorosa, a processional figure. One can still discern folksy elements in the carving style, a certain stiffness that does not distract from the beauty and reverence the image inspires. 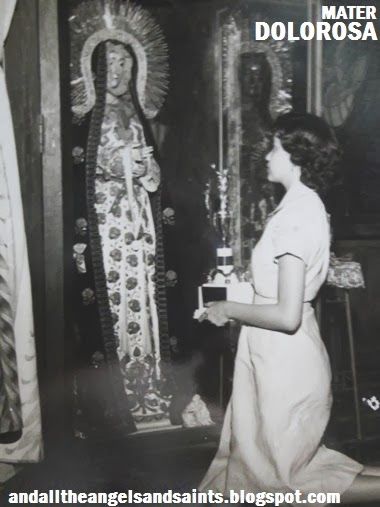 MISS PHILIPPINES 1954, Blesilda "Bessie" Ocampo, offers her trophy to the Blessed Virgin as an act of thanksgiving, before vying for the Miss Universe Pageant where she placed as a semifinalist.

Familial devotion revolved around this heirloom Dolorosa, so that when daughter Blesilda Ocampo won Miss Philippines 1954, the first act of gratitude she did was to present her trophy to their patron. She did the same when she arrived from the 1954 Miss Universe Contest, where became the first ever Filipina semifinalist in the most prestigious pageant of the world.