New works from Mr. Tom Joven, one of the country's leading ecclesiastical artists and Pampanga's most accomplished restorer of sacred art. Here, contemporary carvings of the Dolorosa and Sta. Salome, owned by santo enthusiast Mr. Jeff Popatco of Guam, are painted in the popular Spanish style, achieved through the technique of encarnación, literally, “putting on the flesh”.

*****
MATER DOLOROSA
Mater Dolorosa or Mother of Sorrows is a central figure in Marian art depicting the Virgin Mary and the seven sorrows in her life (The Prophecy of Simeon, The Flight into Egypt, The Loss of the Child Jesus in the Temple, Mary Meets Jesus on the Way to Calvary, Jesus Dies on the Cross, Mary Receives the Body of Jesus in Her Arms, The Body of Jesus is Placed in the Tomb).

In artistic representations, the Dolorosa is shown in a sad and anguished mode by herself, veiled and dressed in black. In other representations the Virgin Mary depicted with seven swords piercing her heart, a reference to the prophecy of Simeon at the Presentation. 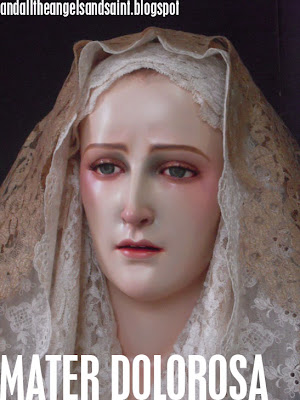 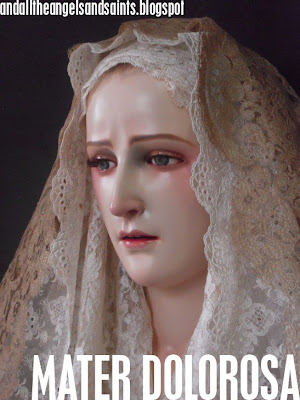 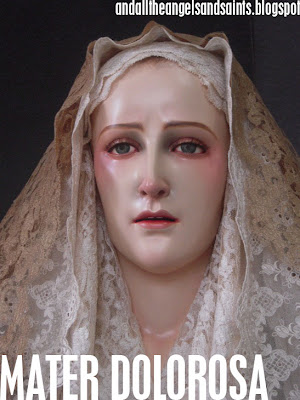 *****
STA. MARIA SALOME
Sta. Maria Salome is one of the “Three Marys” who served Christ during his ministry. She was the mother of St. James the Great and St. John the Evangelist, and was the wife of Zebedee. Mary Salome witnessed the Crucifixion and was among the women who came to clean Christ's tomb on Resurrection day, but found it empty. Hence, she holds cleaning implements as part of her attributes. In the South, she holds a broom, while in other parts of the country, she holds a censer. Her feast day is October 22. 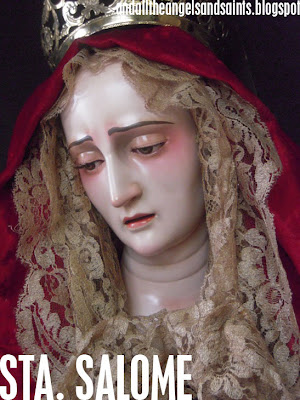 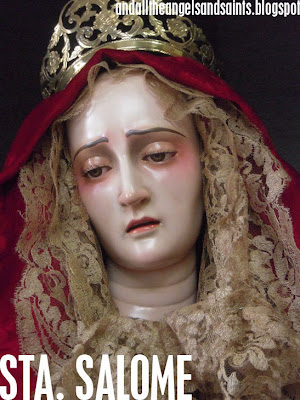 (PHOTOS COURTESY of Mr. Tom Joven. PROCESSIONAL SANTOS from the collection of Mr. Jeff Popatco of Guam.)
Posted by Alex D.R. Castro at 5:24 PM No comments: