In Binanongan, Rizal, miniature statues of saints take center stage instead of the usual life size ones. This recalls the religious tradition in Colombia, where children process their own child-size santos.

This relatively-new Binanongan tradition is called "caru-caruhan" (play carrozas), and it is held during the Lenten season. It began sometime in the 1980s, when children began imitating the Holy Week tradition of bringing out images for the annual Lenten ritual.

Along Regidor St., the children would parade their homemade santos made of sticks, cloth and other available materials. Over the years, the image became more sophisticated, well-made and life-like,

The wooden tabletop  images are small, no more than 20 inches tall, and are outfitted and arrayed in embroidered vestments and metalworks. There are single representations of Lenten characters as well as tableaus.


.
The little santos have their own mini "andas" on which they are borne during the procession. The event is highly organized, and there is even a cofradia dedicated to propagating the devotion and practice in the hope of instilling religiosity among the youths.

The group plans the program, including the Wednesday procession that culminates in the gathering of the santos depicting scenes from the passion of Christ in an exhibit hosted by the St. Ursula Church.

This unusual tradition lives on in Binanongan where it is also known as the Caro-carohan de Regidor to honor its place of origin.
It has become a popular tradition, regularly covered by the media, and visited by local tourists and devotees, who delight in watching the miniature santos as well as the spirited display of devotion of Binangonan youths.
Featured here are representative images from the 2008 procession, taken by Holy Week photo documentarian Dr.Raymund Feliciano. 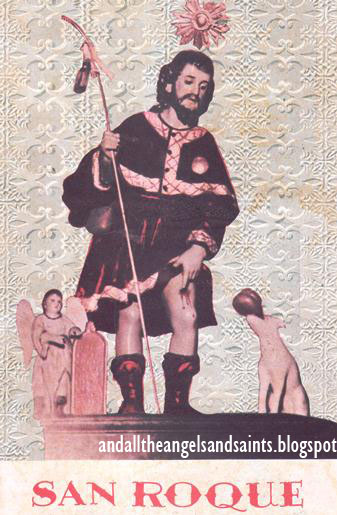 Bilibid Viejo in Quiapo takes pride in having the pilgrim saint, San Roque (St. Rich of Montpellier) as its titular patron. The resident’s devotion is centered on a small, wooden image of San Roque, the pilgrim saint of Montpellier, who ministered to victims of a plague, that he, too, caught. A dog came every day, bringing him bread for sustenance. An angel holds a scroll proclaiming his invocation against pestilences of all sorts. 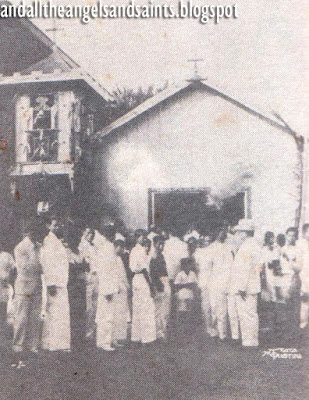 The origin of this image is lost in history, but since Bilibid Viejo is just a walk away to Quiapo’s carving centers, it may be assumed that the image could have been commissioned from any of the talleres in Evangelista, Hidalgo, or even those in Sta. Cruz. The image is enshrined in a small corner chapel that was constructed way before the war.

The devotion to San Roque and its upkeep were assumed by a confraternity that was founded on 18 July 1926, with 16 pioneer members—Hermandad de San Roque. They actively propagated the faith by holding yearly fiesta activities, held in the first two weeks of August. There were daily sponsored masses, band contests, basketball competitions, movie screenings and musical jamborees. The fiesta is highlighted by a procession led by the image of the Sto. Niño, followed by their patron, San Roque, and then by the Virgin of Mount Carmel. 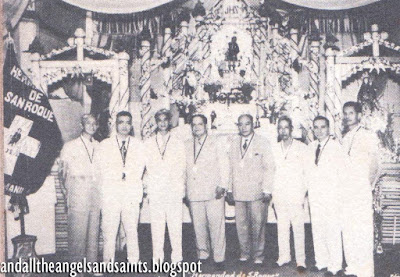 The San Roque fiesta is still being held in Quiapo, marked with rowdy street games. Not many people know that in the not so distant past, especially in the post-war years, the celebration of Bilibid Viejo’s patron had a more devout air, with many groups like “Sub-Comite de Damas, Señoritas y Soletros”, “Los Companeros” (a band of musicians that played during the fiesta) and Bilvie Youth Club lending their hands to promote the devotion though organized pilgrimages, excursions to churches and the promotion of scaramentals through San Roque medals.