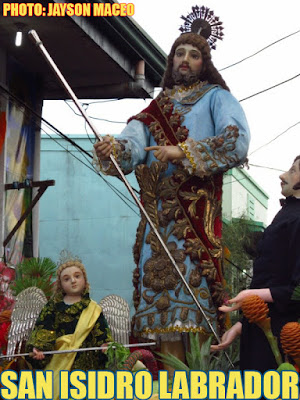 Sincerity Flamboyance, Festivity.
Nowhere else in the world, perhaps, is as much tribte and homage given to the food god than in the coconut-producing towns of Quezon province,

Perhaps it had to do with the utter dependence of the crop on the whims of nature; perhaps it can be explained through the people’s love for ritual and spectacle. Whatever the reasons, the fifteenth of May each year is a special day dedicated to San Isidro, patron saint of the farmers.

For weeks before this day, all regular work stops and the entire towns busy themselves in preparing the buntings and delicacies that will hamg from wondows and bamboo poles around the town. 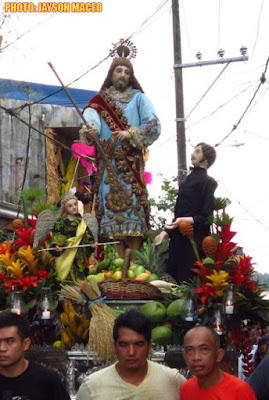 Although each town celebrates the feast in its own way with even urbanized Lucena paying lip service with a few street decorations, the towns of Lukban and Sariaya, are the perennial competitors in the art of celebrating San Isidro.

Lukban, with its candy-colored kipings in fancy shapes, its fruits and baskets, its entire window facades in a riot of colors. Sariaya, with its bamboo poles festooned with goodies which are torn down as the venerable San isidro passes by in the procession in the early evening; less colorful, less party-pretty, bit more exuberant and spontaneous.

And, as always, in keeping with the tradition of prayers for food and a good harvest, no visitor is allowed to go home empty. Food is literally pushed down one’s throat; it is an insult to decline. Houses are opened up to entire strangers; and as the Alcalas of Sariaya have found out, no one has really been proven to be the loser by such a reckless gesture. 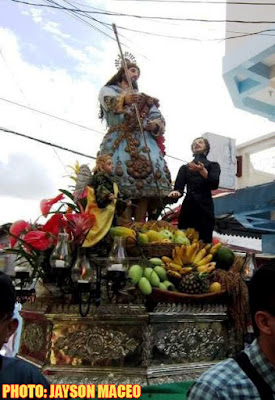 312. LA PIETA IN WOOD AND BONE: Grief and Gladness at the Philtrade Antique Pavilion 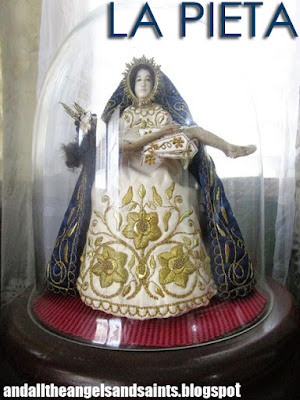 In the late 1980s, Philtrade in Pasay became one of the major antique centers in Manila due to its cluster of pavilions that were earlier envisioned to be venues of international expositions and trade shows. I was fortunate to catch the tail-end of the glorious antique collecting era, when shops were still relatively full of real, antique stuff. 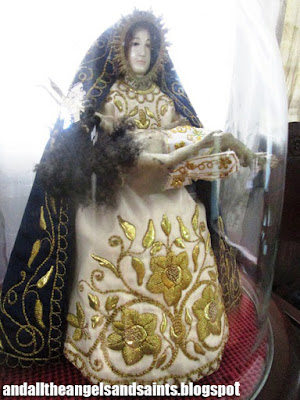 Prices were already steep by then, and I would go to these exhibits simply to feast my eyes on the beautiful santos, and hope to find one that would fit my modest  Makati worker’s budget. Not only were the popular antique shops of Mabini represented at the Philtrade pavilion, but there were also smaller, independent antique sellers who rented out spaces to sell their wares. 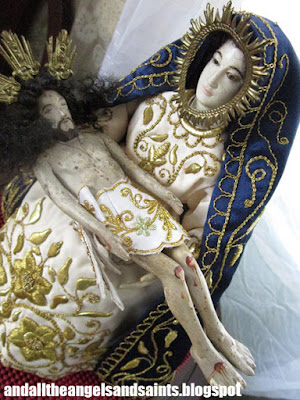 It was in one such show that I found one of my favorite santo ensemble. I had actually put a down payment on an  ivory Virgin from Sieva Antiques, but when I returned for it the next day, it had been sold to another customer. The dealer thought I would not come back for the it-- a conclusion he arrived at, maybe because I was dressed in tattered shorts and T-shirt. 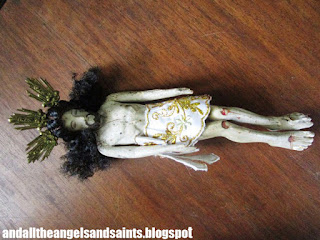 I was so livid at this deal gone awry, that when I came back to Philtrade to collect my refund, I decided to linger and check out the smaller, less populated stalls of the pavilion to forget my disappointment. It was in one of these holes-in-wall (I could not even remember the name of the shop) that I chanced upon a remarkable antique ensemble—an unusual La Pieta which depicts Mar and Jesus after the crucifixion. The tableau consists of the seated Sorrowful Virgin with a head and hands of bone, cradling on her lap a small, naively-carved wooden 5 in. Christ. 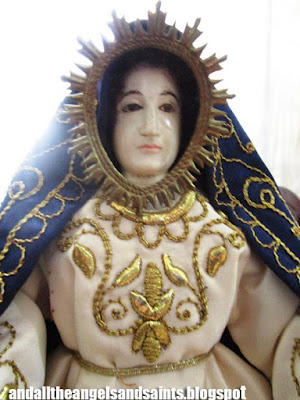 When found, they were without clothes, wigs and accessories, and the image of the Virgin seated on a plain, crumbling, wooden stump. They were obviously of lesser quality than the previously mentioned ivory Virgin, but how many in their collecting lifetime, has seen a La Pieta in wood and bone? 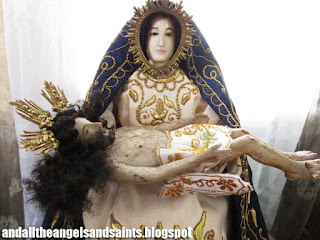 It was a no-brainer: I had to have this La Pieta. The dealer wanted PhP 7,500 for it, but I turned on my full negotiating power until I whittled the price tag down to Php 6,000. I  gave him the amount—which was basically the 5K refund plus the remaining 1K from my wallet—and La Pieta was mine. 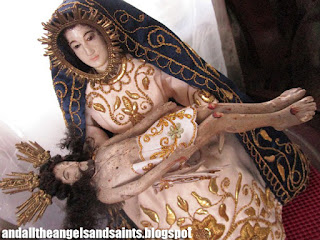 It was only many years after—after having been acquainted with Dr. Raffy Lopez---that I had this bone and wood La Pieta restored at his atelier. The Sorrowful Virgin  had her features repainted, and one eye restored. Wigs and metal accessories were ordered, while new embroidered vestments were worked on. Finally, the woodworm-damaged base was replaced. The tableau was then encased in a glass dome—which actually was a glass globe of a hanging gas lamp. 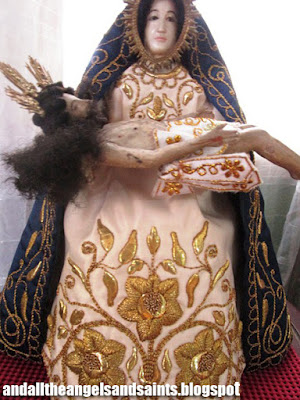 In our old ancestral home, on a small circular table in the ante-sala, my antique La Pieta sits. I never thought that my disappointment  over a santo that got away would be quickly assuaged by this extraordinary find at a humble antique stall in Philtrade, turning my feelings of dismay to instant delight! Somebody must have pities me so much, he gave me, instead—La Pieta!