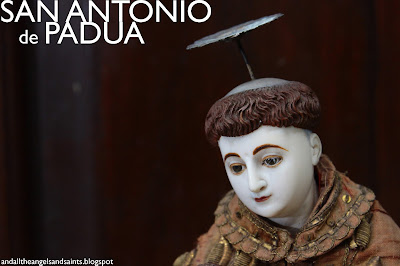 THE PREACHER SAINT, San Antonio de Padua, was born in Lisbon, Portugal and is venerated today as one of the greatest Franciscan saints.

Saint Anthony of Padua, the great Franciscan thaumaturgist, was often described as short and even chubby. The first biographies of the Saint made some references to his physical stature, suggesting that he was ‘robust’ and that he had a ‘Mediterranean’ complexion. In the 1500s, Girolamo Romanino depicted Anthony as a slightly balding man with a rounded face. 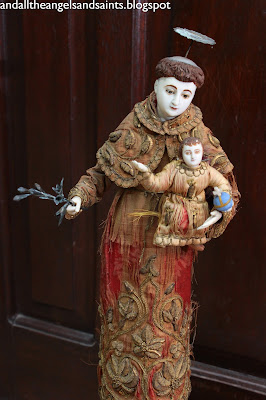 This antique ivory santo of the famous preacher saint vividly captured those descriptions. The chubby-faced saint was obtained from a local Manila shop, and which I found on display while passing by the said antique store. The ensemble was complete, the santo wears its original Franciscan habit, frayed and tattered, but with the gold embroidery intact. He holds a sprig of lilies on one hand and cradles an orb-carrying Nino on the other arm. 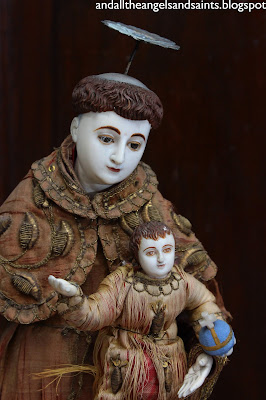 I was struck by the quality of both ivory and carving--the face of San Antonio and the Christ Child are wrought beautifully in white ivory, painted with great detail, from the perfectly arched eyebrows right down to the irises of their eyes. Yet, the image also shows hints of folksiness, as gleaned from the way his fingers are rendered, and the awkward stiffness of his stance. 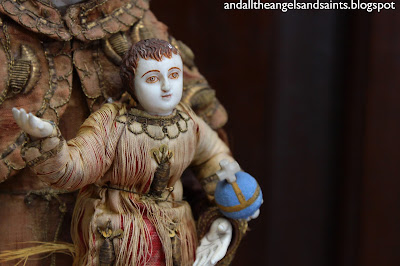 I had not planned on acquiring this image, and for months it lay displayed inside a replacement virina, mounted on its gilded carved base. I was told that it had been reserved, so I had sort of given up on this beautiful santo. A few more months passed before I learned that San Antonio was back on the market, and it was offered to me at a reasonable discount. 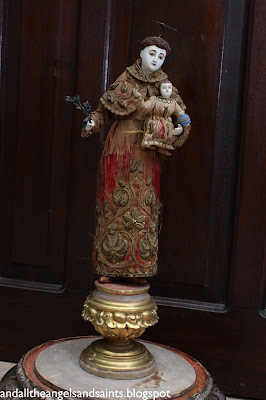 In one of his sermons, the good saint wrote "The saints are like the stars. In his providence Christ conceals them in a hidden place that they may not shine before others when they might wish to do so." How lucky I am that this piece--in all its fatness-- has come out of its hiding to shine as one of my prized and favorite ivory santos in my collection..
Posted by Alex D.R. Castro at 6:36 AM No comments:

228. Collecting the Past as a Beacon to the Future: DON LUIS MA. ARANETA, by Ernesto E. Punzalan

Condensed from an article by Ernesto E. Punzalan of the same title,
Originally published in Sunburst Magazine. March 1979.
Photography by George Tapan and Resty Guevarra. 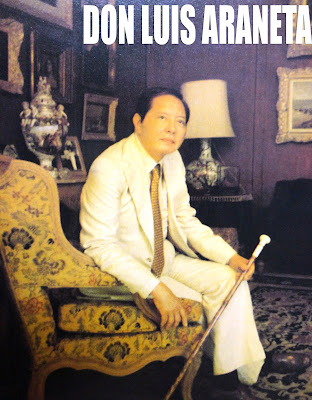 Luis Ma. Araneta, the genteel and generally acknowledged numero uno of private antique collectors in the Philippines, could very well have the same outlook as the above Italian in amassing his own vast collection. A patrician by birth and manner, Araneta regards his relics as “a part me, my sensitivity to what represents man and art, especially to that which we call Filipino”. 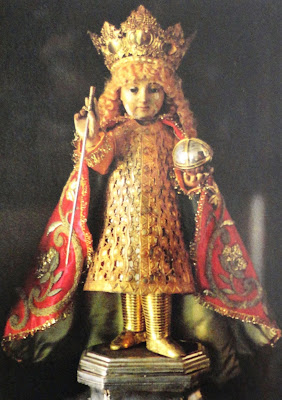 The image of the Sto. Nino was a favorite subject of both Filipino and Chinese and carvers of the 18th century. This ornate Nino is dressed up in an 18th carat gold filigreed costume complimented by a gold corona, boots and sceptre, with a red satin cape intricately trimmed with gold thread borders and fleur de lis designs. The orb is silver with gold trimmings. Done in heavy wood, 18th century.

The Filipino is a vague shroud behind which hovers the mysticism and snob appeal of antique collecting. Mga lumang bagay-bagay, the almost derogatory Tagalog term for anything old, has been the bone of conetnion and debate among many collectors for 2 decades now. What started as atrickle in the fifties is now a confused fad. Legitimate art enthusiasts are swept aside in the stampede of hoarders, hustlers, investors, unscrupulous dealers and artistic mafiosi. 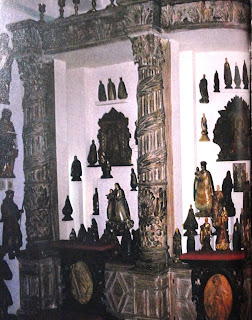 Today, no abode of the Filipino nouveau riche can rise without an anonymous painter’s obra from the 18th century or a Sung or Ming vase (usually bought at padded prices) and a plethora of fakes and instant antiques assembled by those creative artists of Rizal and passed off to the flush but unknowing as the real thing. 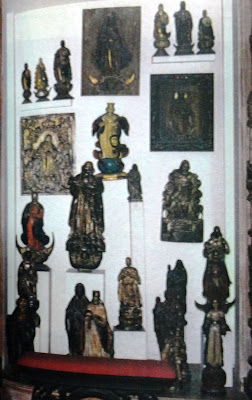 Don Luis, as he is fondly called by most acquaintances—or ‘Lui’-- to his friends, enthuses: “”I am glad that the awakening that has made me realize the value of these objets d’art is now a common experience”. His awesome museum is now made possible, a quixotic enthusiasm. He brought to it from the start an in-born artistic talent (he is an architect) and a millionaire’s checkbook. 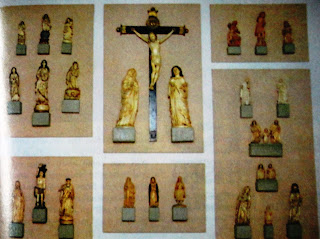 The Araneta collection has thus become perhaps the most talked about in the country. The ramblings house (palazzo might be a more accurate term for it) in McKinley Road in Forbes Park teems with priceless discoveries—ageless santos in ivory and wood prominently displayed side by side with old Damian Domingo, Amorsolo, Hidalgo, Luna masterpieces as well as the efforts of anonymous painters. Luis Araneta’s antiques has made him humane, he says.

His desire to share his largesse to his countrymen has already led him to donate a large portion of his collection to the San Agustin Church Museum. The “Pagrel Collection”, an acronym which stands for the name of his three children—Patricia, Gregorio and Elvira—is housed at the former refectory of the Augustinian friars in the convento of San Agustin.

It has been dedicated by Luis Ma. Araneta to the memory of his mother, Doña Carmen Zaragoza vd. De Araneta on the occasion of the first centennial of her birth on June 29, 1976. Don Luis himself passed away on Easter Sunday on April 22, 1984.