294. VIRGEN DE GUADALUPE: From an Image on a Tilma to a Sculpted Santa

The apparitions of Our Lady of Guadalupe to a Catholic convert, Juan Diego, an Aztec Indian of Mexico, began in Tepeyac Hill in 1531. There, the 57-year old Juan was told by the Lady to inform the Bishop what he has seen.  Juan Diego succeeded only in talking to the Bishop on his second visit; in turn, the Bishop advised the native to ask the Lady for a sign to prove that she was indeed Mary. In Her next apparition.the Lady asked him to gather roses growing on top of Tepeyac Hill, which Juan Diego collected and wrapped in his tilma, a cape made of cactus fiber. 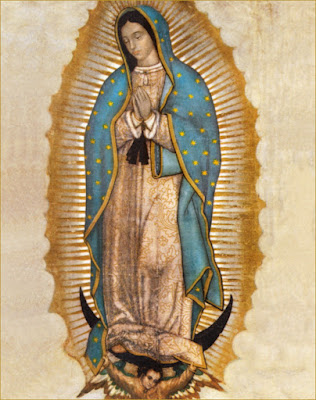 After the Lady arranged the roses, she sent back Juan Diego to the Bishop. Appearing before the religious leader, Juan Diego let fall of the roses wrapped with the tilma. But it was not the blooms that stunned the Bishop, for there,impressed on the tilma, was the picture of the Blessed Mother—just as the native described Her.

Upon his return to the village, Juan Diego was surprised to find a sick uncle cured, who told him of his meeting with a young woman bathed in soft light. This Lady told him She had sent his nephew to see the Bishop with a picture of herself.  She then told Juan Diego’s uncle that she and the image be called “Sta. Maria de Guadalupe”. It was clear that She was one and the same woman--the Blessed Virgin--seen by both Juan and his uncle, the same one whose likeness was now on the tilma. 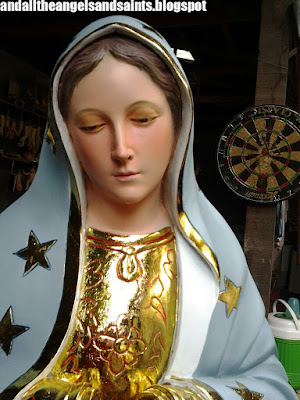 Thus began the spread of the worldwide devotion to the Virgin of Guadalupe. The devotion is centered on the tilma with the miraculous imprint of the Virgin’s image that shows no sign of being painted or sketched. It is enshrined in the basilica of Our Lady of Guadalupe, which has become the most popular religious pilgrimage site in the Western Hemisphere. 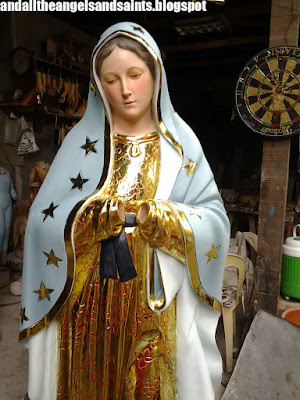 For centuries, attempts have been made to replicate the image sculpturally—and it has always been a challenge to represent the image tri-dimensionally, as it has quite a complex iconography. 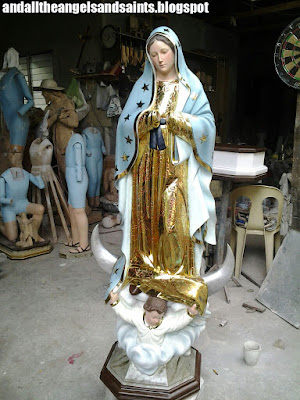 The Lady stands upon a crescent moon, in reference to the woman of Rev. 12:1 who has symbolically the "moon under her feet",  a symbol of her perpetual purity. An angel supports her,  a testament to her royalty. The Lady’s mantle is blue-green or turquoise, the color of eternity and immortality. The limbus or gold border of her mantle is another sign of nobility. The stars on her mantle are indicative of her supernatural character and her personage as  the Queen of Heaven. They are the pre-dawn stars of the winter solstice that appeared on the morning of 12 December 1531. 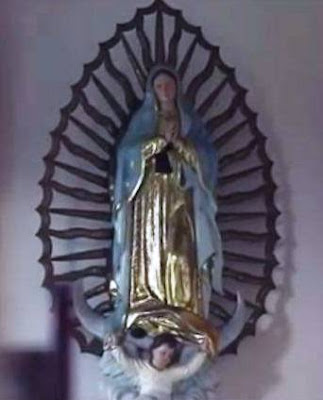 The bow, tied high around her waist, is a  symbol of new life. Its  position and the slight swelling of the abdomen indicates that the the Lady is infanticipating,  almost ready to give birth, which would further confirm her identification with the woman of Rev. 12 who is about to deliver her child. The whole figure is surrounded by a strange light, a mandorla, with scalloped edges.This representation, crafted by award-winning religious sculptor Nick Lugue of San Vicente Apalit, was commissioned by a patron from Batangas, who donated the 4-foot image to a local church where She now reposes.

In the ancient barrio of Saluysoy, in Meycauayan, Bulacan, there kept in the visita of the barangay, two old images revered since one can remember: the image of Santo Cristo (Crucified Christ) and San Pedro (Saint Peter).

Saluysoy, located adjacent to the heart of the town, takes its name from a slow-flowing gurgling brook which cut northwards at the eastern side of the original location of the barrio. “Saluysoy” means the sound of a brook’s steady water flow.  But when the water dried out, residents relocated to the west of the barrio where  a faster-flowing river was found. People dug up wells to ensure that they do not run of water anymore in their new place, which retained the name “Saluysoy”. The former abandoned site was named “Palanas”.

The barrio played a small, but significant part in the second world war. In 1941, when the Japanese Army broke through the USAFFE lines en route to conquering Manila, the barrio folks put on a gallant resistance that delayed the march of the invaders to the capital city by 11 days.

In the 1950s, it was said that indolence was unknown to the hard-working people of Saluysoy. Though small in size, the barangay thrived on many industries—shoemaking, wood carving, blacksmithing, goldsmithing, farming, fishing, and making of religious images.

It would seem that the two processional images were carved locally for the chapel, as the people were also known for being devout and religious. The chapel itself was rebuilt after the war, and at one time was considered to be the most beautiful in the whole province of Bulacan. It was fully funded through the efforts of “Samahang San Pedro”, a leading religious organization.

Today, Saluysoy is one of the more prosperous barangays of the city of Meycauayan, its prosperity driven by its jewelcraft and goldsmithing industries. Every year, the images of the barrio patrons—Santo Cristo and San Pedro—are brought out for processions during the May 4 barangay fiesta. San Pedro’s feast day is also observed separately by Saluysoy folks every June 29.

CREDITS:
Many thanks to Mr. Robby de la Vega for the photos and for the background on brgy. Saluysoy from the Historical Data Papers of Meycauayan
Posted by Alex D.R. Castro at 4:58 AM No comments: