Sta. Filomena (Filia + Luminus , daughter of light, aka St. Philomene), was a martyr-saint whose remains in the catacombs of Priscilla were discovered in May 1802.

Her remains were removed to Mugnano del Cardinale in 1805, where several miracles caused her devotion to spread. Credited to her was the healing of Venerable Pauline Jaricot in 1835. It was Saint John Vianney was instrumental in popularizing her cult.

In 1833 a Neapolitan nun had a vision in which the saint revealed that she was a 13 year old Greek princess, martyred by Roman Emperor Diocletian. Though venerated by many Popes (she was canonized in 1837) and her feast observed in some places, Sta. Filomena was never included in the General Roman Calendar for universal use.

In Feb. 1961, the Holy See had her name removed from all liturgical calendars that mentioned her. This order did not call into question her existence or sainthood, nor prevent popular devotion to the saint.

In the Philippines, an ancient church in Alcala, Cagayan has become the seat of her local devotion—the church of Sta. Filomena (St. Philomene Church).

The Spanish colonial brick-red church is regarded as the widest church in the Philippines, and the largest in the Archdiocese of Tuguegarao at 67 m in length, 24 m in width, and 12.5 m in height. Construction began in 1881 under the term of Fr. Casamiro Gonzalez, which was completed by Fr. Pedro Perez. 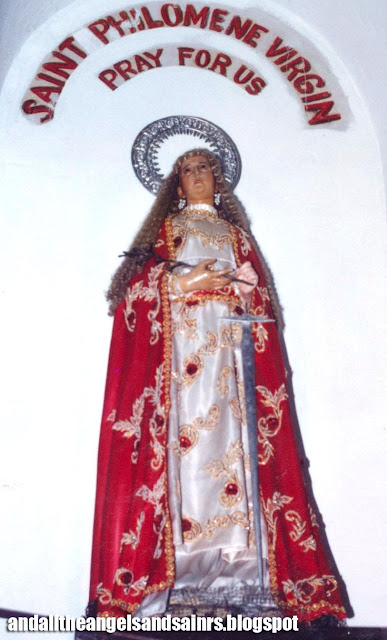 Enshrined in the altar is the revered image of Sta. Filomena, an old de vestir image, dressed in her vestment and holding a palm of her martyrdom. The origins of this image is not known. Sta. Filomena, is the patroness of young girls, babies and youths.

Besides Alcala, Cagayan, she is also the patron saint of several Philippine places such as Sibonga (Cebu) where a fiesta is held in the first week of August). There are also barangays named after her: Sta. Filomena in Iligan City, Guagua (Pampanga) , Cordillera Adminstrative Region, Alegria (Cebu), San Pablo City and Siquijor.
Posted by Alex D.R. Castro at 11:04 PM