The persistent belief that images of Jesus, saints and particularly, the Virgin Mary might become animated and imbued with the power of movement has been espoused since since the olden times. This is also true for some non-Christian figural statues.

Sightings of weeping, blinking and moving statues of the Virgin have been reported in such places as Vietnam, Ballin-spittle, County Cork, Akita in Japan, and of course, in the Philippines, attracting wide interest from zealous devotees. For example,  the ancient image of the Apo Caridad of Ilocos has also been reported as having been found sometimes with amorseco burs stuck to the lower hem of the dress—a proof, devotees say, that the revered Marian image went out unseen for walks.

In a small subdivision school in San Fernando, Pampanga, small image of the Blessed Virgin has been similarly creating a stir in the region since unexplained things began happening in early October of 1987.  The sacred image, not even a foot tall, was acquired a month earlier by dry goods dealer Lhoree Lee from Mrs. Rosalio C. Toledano, who had trade it to Lee in exchange for fabrics.

Strange events attended the transfer of the image to the Lee residence like the smell of roses and candles that permeated the place, which the family first dismissed. But on October 9, amorseco (cogon flowers) burs began appearing and sticking on the hair of the image, increasing in coverage every day to include the whole face and our Lady’s vestment.

On October 13, the tiny statue began to weep. Lee, believing that these were divine signs, consulted with then Archbishop Oscar Cruz on    what to do. Meanwhile, people started coming in droves to see the Virgin—now known as Our Lady of Amorseco.

The Virgin then began to send messages through the school caretaker, Romeo G. Pabustan, who has since become her medium. Portent of her arrival is the scent of flowers that permeates the chapel where it is kept. During these times, Pabustan goes under a trance and begins writing our Lady’s messages and calls for prayer.

The miraculous image is enshrined at Our Lady of Amorseco House of Prayer which has drawn thousands of visitors, including media personalities, showbiz people,  church leaders, government officials and high society VIPs. It is also a center for outreach programs and many religious crusades. 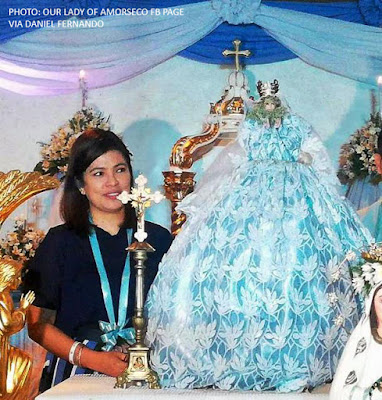