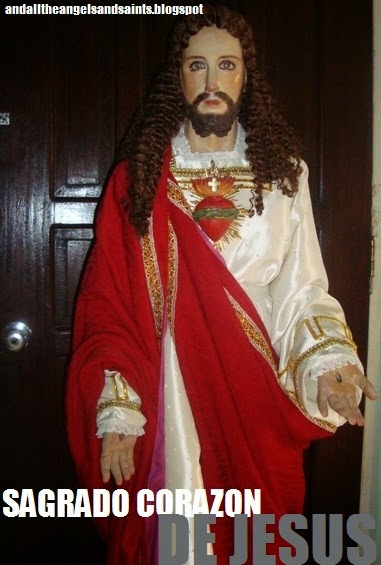 This wooden Christ head with matching hands is one of the earliest antique santo heads that I bought for my collection. I had forgotten where I got it, but it was definitely from a Mabini antique shop and that I paid Php 6,000 for it, inclusive of the damaged hands, which I thought was just too much then. 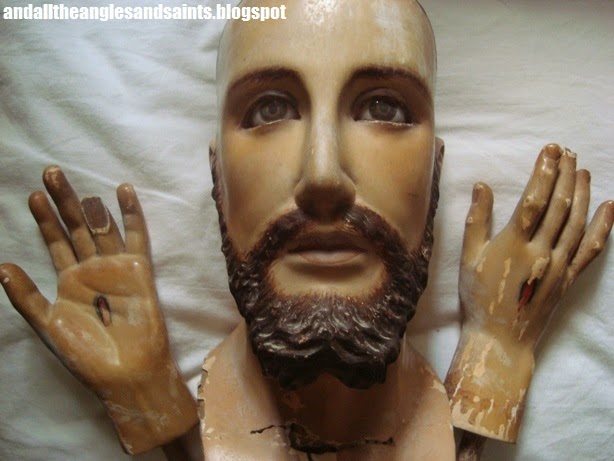 The head itself shows some wear and wood damage at the neck. But the original encarna, though a bit scruffy, is intact, which shows that the santo head is really old, my only reason for buying it. I was not particularly impressed by the carving and I thought the narrow-faced Christ was a bit ‘cross-eyed’. 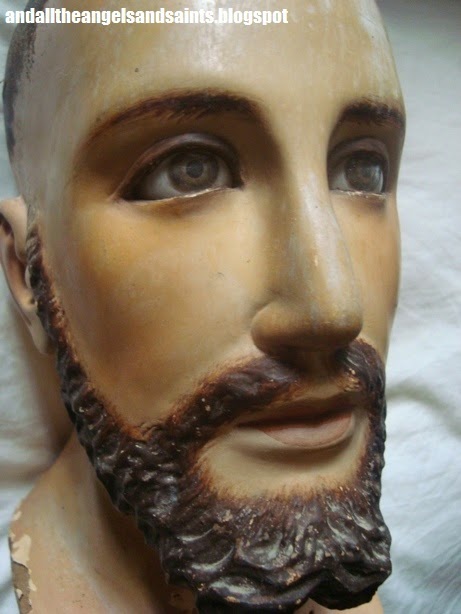 By surprise, I found a similar Christ head in the workshop of Mang Kiko Vecin—a twin, in fact, with the same narrow head, same ‘banlag’ (cross-eyed) eyes and shallow beard carving—leading me to believe  that these were mass-produced heads from some early 20th century Manila religious shop. 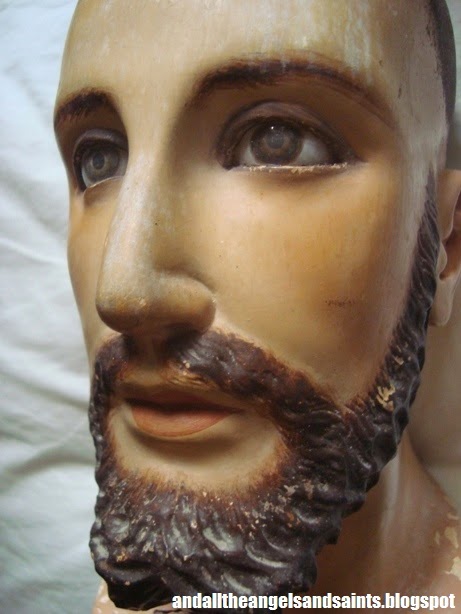 Nevertheless, I took it home and for the longest time, I kept figuring what to do with it. The hands with missing fingers bore wounds. It could be a Sacred Heart, although popular depictions show Christ with a raised pointing finger. I could also have it made into a Salvador del Mundo, standing on a half-globe with arms outstretched. Christ the King was another possibility, a standing one, like that from Vigan. But since I had other priorities, I put this Cristo project momentarily in the sidelines. 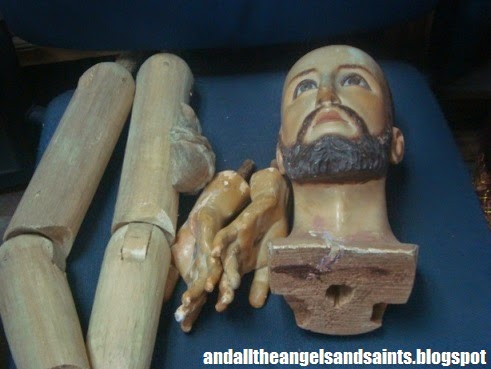 Two years ago, an officer from our church asked to borrow a Christ the King image from me. But the only one I had was an altar-size seated Cristo Rey in an urna, too small for church use. This year, I was once again asked if I had a Sacred Heart Christ that I can lend for church use. 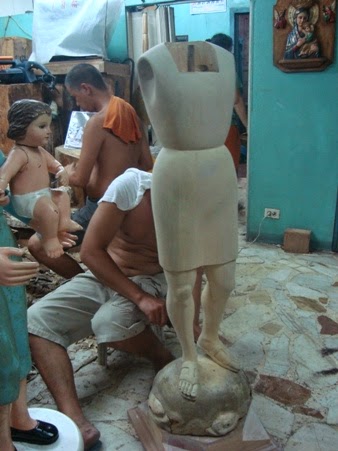 It was then that I decided to proceed with the restoration project for a Sacred Heart statue, using the antique Cristo head and hands—convertible to a standing Cristo Rey image! 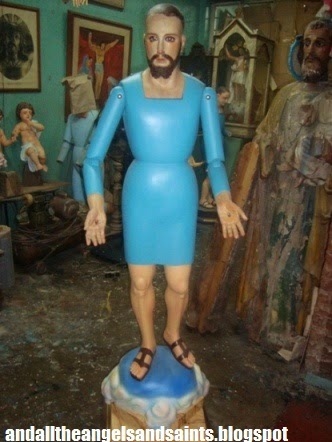 Off to Mang Kiko Vecin I went, for the construction of the body. I thought it would be an easy task, as it took only three weeks for the carvers to make the body. 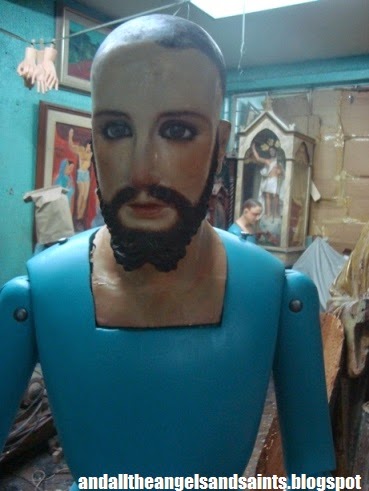 The finishing was done in another week or so—followed by the drying process. I had earlier told Mang Kiko to have the body painted and white, but when I was called to check on it—the body was painted blue! 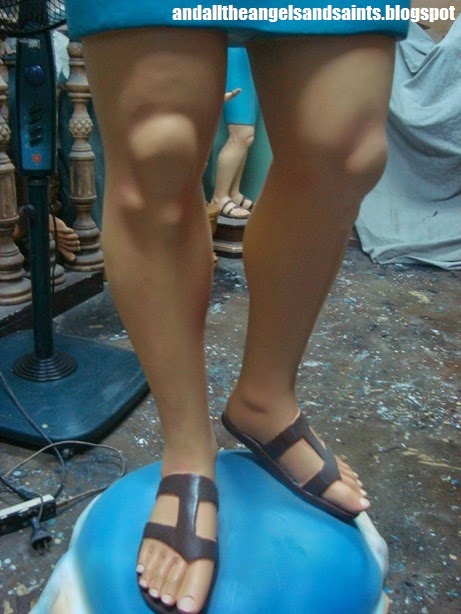 That was no big deal compared to the retouching of the head.  The head had some discolorations and pockmarked holes, but Mr. Vecin wanted to preserve the original encarna by just doing  light washes on the facial scruffs. But the encarnador couldn’t get the right mix of color right, and the first attempt had the Cristo head looking like it had  ‘an-an’ (ringworm) all over the face! 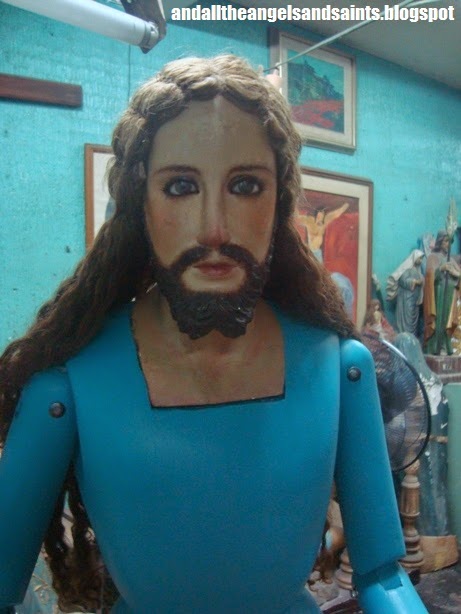 The damages on the wood couldn’t be repaired completely by putty or epoxy, until I suggested the use of clay epoxy which I recently discovered and which can be easily be placed in crevices and molded by hand. The hands were no problem at all, although the painter had the same color mixing problems. 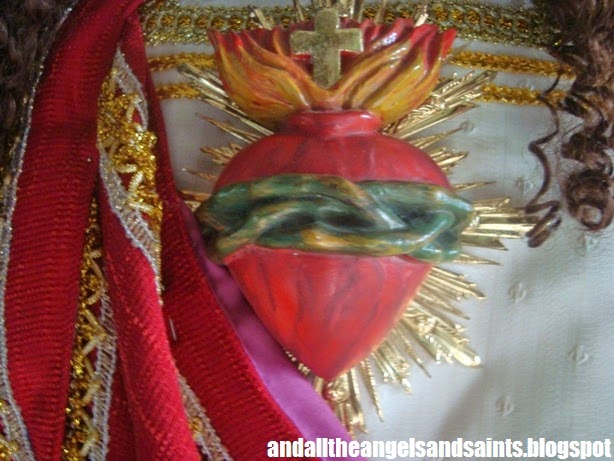 The new,  flaming Sacred Heart to be set on Christ’s breast was carved separately and then set on brass rays. The image, standing on a simple half globe base, measures 52 inches from the top of Christ’s head to the bottom of His peaña. 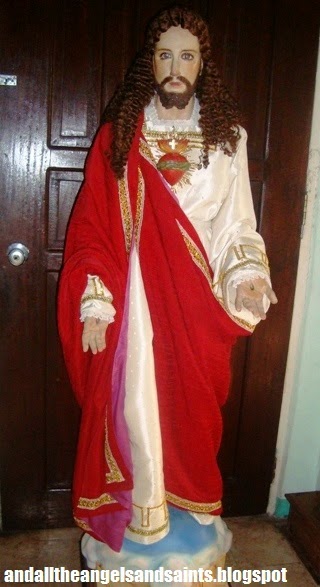 Dressing up the image was next.
Since I wanted a set of no-frills vestment, I asked Ramon Gutierrez to create the robes of the completed Sacred Heart, to be done in traditional colors of white (for the tunic) and bright red (for the cape, with a pink lining).  The draping was also conventional, with the cape tucked under the armpit, with one end over the shoulder. As Sacred Heart, the image now looks like this: 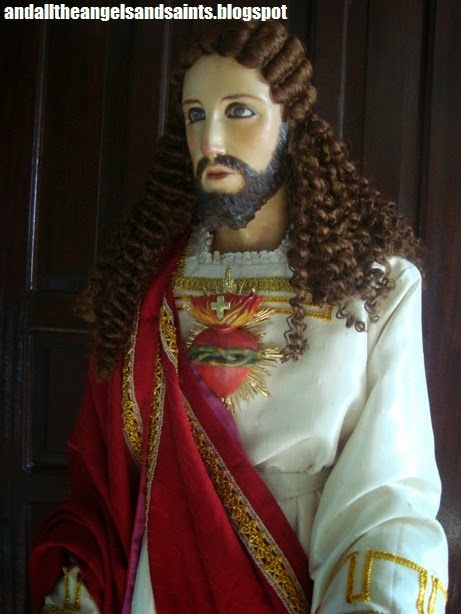 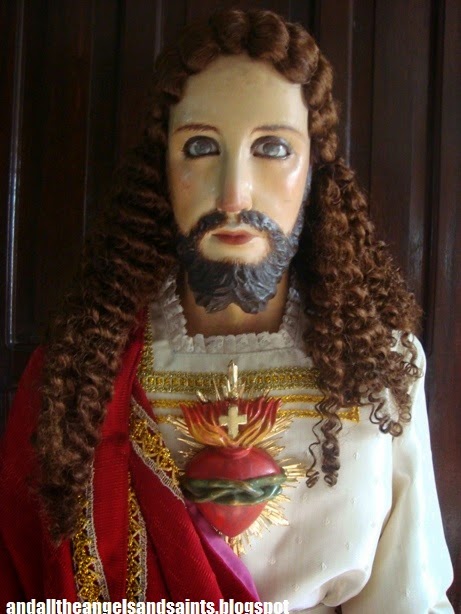 Meanwhile, the other metal accessories that will help transform this Christ image into a standing Cristo Rey were ordered separately from my pukpok (metalsmith) boy from Mexico, Jeric Canlas. Specifically, the image needs a royal crown, a scepter and an orb. 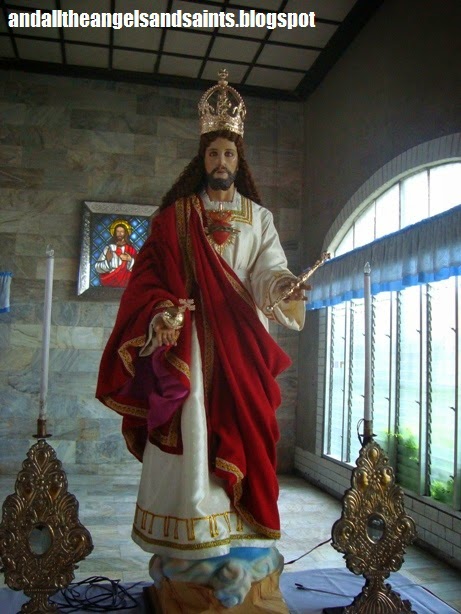 A few more weeks of work and my Christ image--as Cristo Rey-- was ready to be installed at the Divine Grace Church, in time for the Nov. 13 Christ the King celebration. 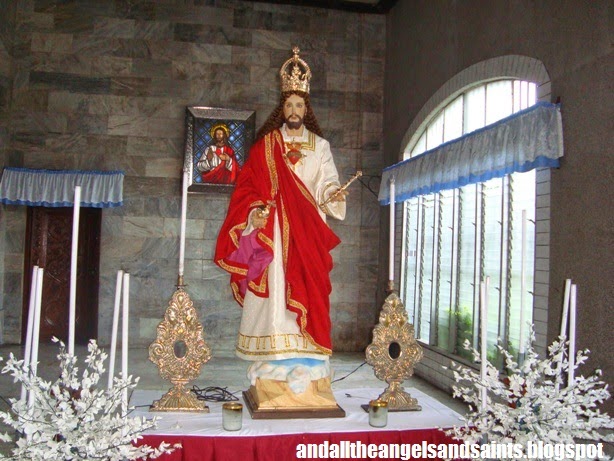 I am happy with the results of the restoration, and happier still with the convertible transformation—from Sacred Heart to Christ the King. Viva Cristo Rey! Viva Sagrada Corazon de Jesus!