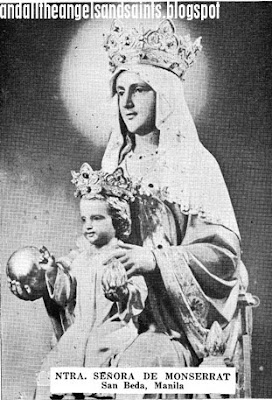 At the Chapel of San Beda is housed the image of Our Lady of Montserrat, one of the are representations of the Virgin seated on a throne with the Christ Child on Her lap. Both she and the Child Jesus wear crowns of gold. Her dark complexion has earned her the name “La Morenita” (the Dark One).

The image of Ntra. Sra. De Monserrat was first brought to the Philippines by the Benedictine Fathers in 1895, an exact replica of the small dark-complexioned statue of the famous Monserrat virgin venerated in the Benedictine monastery nestled atop the Monserrat mountain of Cataluña, near Barcelona, Spain. Monserrat means "sawn mountain" because the rocky mountain resembles the teeth of a saw from a distance.

According to tradition, the miraculous image was first known as La Jerosolimitana (the native of Jerusalem), since it is thought to have been carved there in the early days of the Church. The statue was eventually given to St. Etereo, Bishop of Barcelona, who brought it to Spain. In the 7th century, when the Saracens invaded Spain, the Christians of Barcelona heroically defended it for three years until they could hold out no longer. The image was brought for safekeeping to Montserrat, in a small cave on 22 April 718 and was discovered and placed in a small church that was soon built; this little church developed into the present church that was completed in 1592. 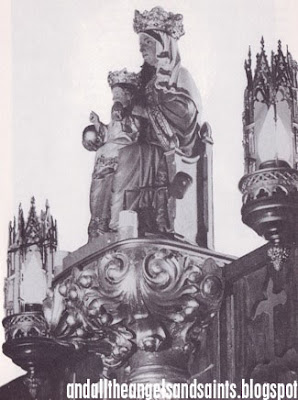 PICTURE SOURCE: Shrines of the Virgin Mary in the Philippines. A Catholic Guide Manual by Gaudelia G. Donato.
Photographs by Sr. Esther Maria, S. Sp. S. (c) 1975.
Of carved wood, the 3 feet plus statue is in a sitting position and has an elongated face and a delicate expression. Done in the Romanesque style, the Virgin wears a gilded tunic and cloak.Beneath the crown is a veil adorned with stars, squares, and stripes in subtle shades of color. The Virgin holds a sphere, while the other is extended in a graceful gesture. The Child Jesus sits on His Mother's lap and also wears a crown. His right hand is raised in blessing; His left hand holds an object that resembles a large pine cone. A cushion serves as the Madonna's footrest; she is seated upon a chair that has large legs and whose back is topped by cone-shaped finials. It was to this miraculous Lady that St. Ignatius Loyola offered his sword and dagger in 1522.

The replica was first kept in a small chapel in Tanduay. The devotion quickly spread as the same indulgences gained in her Cataluña shrine were also granted to visitors of the Manila chapel. To accommodate the growing number of devotees, the image had to be taken many times to the San Sebastian Church just to accommodate them. The image was transferred to the Chapel of San Beda when the school moved to Mendiola St. in 1926.