(A lecture delivered on Jan. 1982 at the Philippine Plaza Hotel. Originally published in The Manila Arts & Antiques Exhibition Program, Sept. 13-10, 1982)
By Esperanza B. Gatbonton
Santo photos courtesy of Tony Martino

First of all, I would like to thank the Antique Dealers’ Association for asking me to address this distinguished group of collectors and connoisseurs of Philippine artifacts. Second, I wish to commend the Association for its efforts to upgrade the Philippine antique trade. Simply by ensuring that all items put on sale are genuine, and (one hopes) also reasonably priced, you will be ding a great deal to develop buyer’s confidence and enlarge your national market. 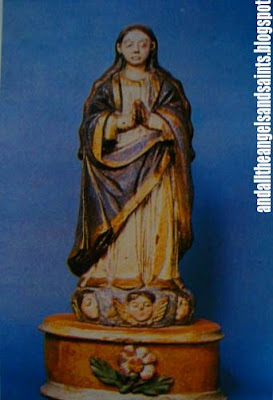 The growth of the antique market in recent years has brought to light many rare and valuable pieces that testify to the wealth and variety of our cultural heritage. It is a pity that a great number of these artifacts—which should have remained here—have disappeared abroad by means of the antique trade.

Having said that, I wish to acknowledge that many dealers have tried—do try—to offer outstanding art objects they turn up to various institutions in the country that have to do with the preservation of national treasures.

The Intramuros Administration—where I work—has benefited a great deal from this thoughtfulness of some art dealers. Without your help, many more rare and beautiful pieces would have passed on to private or foreign collectors, depriving our public at large the chance of ever seeing them. 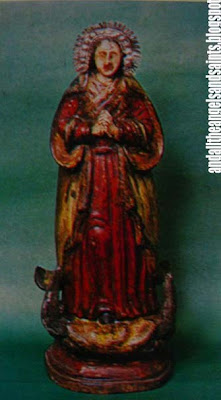 Perhaps, the Association can go a step further and set up a library of its own—which could compile pictures and other data of art objects sold to foreigners, or otherwise shipped abroad. This will at least preserve records of provenance and style—and help future scholarship on Philippine antiquities.

The study of our religious carvings or santos have suffered greatly from this lack of historical record. For instance, until recent times, people widely supposed that most of our ivory carvings had come from Mexico or Spain; and that those found here were all carved by Chinese craftsmen. It had taken the work of a scholar and researcher in Spain—working the span of over a decade—to call our attention to the significant number of ivory carvings in Spain, Mexico, and other European museums that are of Philippine provenance. Whether these were carved by Filipinos or Chinese is another story we have yet to verify. 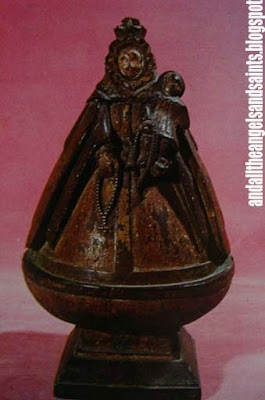 The indio tradition and culture was oriented towards ornamentation. Like all other ‘primitive’ societies, the indio drew inspiration from his surroundings and found an effective means of reaching out to his largely unknown, somewhat formless universe by resorting to symbolical representation. He embellished most objects of daily life—transforming ordinary objects and usages into more than purely functional artifacts. Being an animist, his representations of his gods recalled the symbolical mysteries to which his mind was drawn. 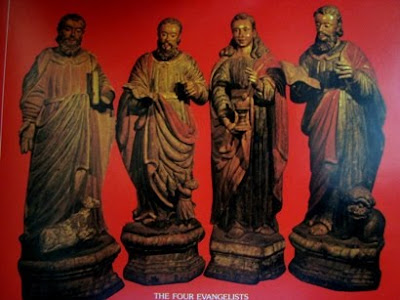 These representations—whether carved on the surfaces of tools, woven into cloth, tattooed on the skin, or engraved on jewelry—created a strong tradition which formed the colonial sculptors’ artistic background. The representations of anitos or likha were crudely carved—crude in the sense that the sculptor made no attempt to delineate, but only to represent, the elemental form of things he could not see, yet intuitively recognized as real.

How does one explain why all people in their beginnings choose to represent objects in a manner that we can only call “crude”? The first Spanish settlers in the islands expressed great horror on seeing these idols—which they regarded as monstrosities and instruments of the devil. The early missionaries undoubtedly had a fine time seeking them out from the homes of their parishioners, and condemning them to the bonfire.

Much has been said about the syncretic character of Philippine Catholicism; but the fact remains that at least in the beginnings of Christianity in the archipelago, dislocated Filipino sensibilities groping for direction simply made the transfer from Bathala to Dios—from anito to santo. And once unsophisticated minds saw the parallelism between Catholicism and their own beliefs, they proceeded with characteristic fervor to Philippinize the new religion.

To be sure, the transition did not come about without some soul-wracking agonies. Nicely-worded edicts from Philip II assuaged some doubts; and we must not discount the dedication and genuine saintliness of many of the early missionaries. 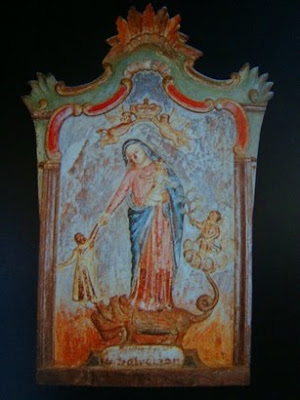 As a result, practically all the lowlanders and inhabitants of the known riverways were quickly Christianized, and churches were built all over the archipelago. By 1586, the Augustinians alone had 27 missions scattered from the Ilocos to Cebu and Panay. By the 17th century, stone churches were being built, and elaborate retablos and altars carved to decorate them.

The Jesuit Antonio Sedeño, who had much to do with the first buildings in stone, was also responsible for the earliest religious paintings done toward the end of the sixteenth century. He sought migrant Chinese artisans already familiar with the brush and color, and taught them how to paint pictures of the Blessed Mother. These first icons Sedeño earnestly distributed to his friends for use in churches and homes.