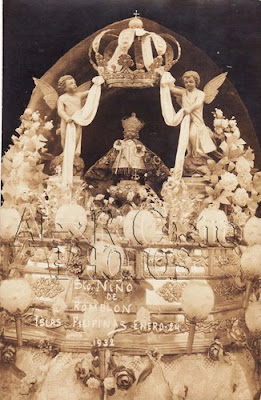 If Cebuanos have their revered Sto. Niño de Cebu who is honored through a rambunctious celebration called Sinulog, the people of Romblon province also have an ancient image of the Holy Child—the Sto. Niño de Romblon—which has been an object of veneration for many generations.
Tradition has it that the small Niño image was commissioned by an Augustinian fraile, who had the figure carved in the Philippines, based on the original Sto. Niño de Cebu. This particular Cebuano Niño was carved by a Flemish artist, brought to our Islands in 1521 by Ferdinand Magellan. The replica image was meant to be shipped to Madrid, but when the galleon carrying the image stopped over at Romblon, a typhoon stopped the ship from leaving. The Sto. Niño was thus taken down from the vessel and brought to the local church where a Holy Mass was offered. After the rites, the Sto. Niño could not be moved from its place, and so the galleon left the image behind.

For over 4 centuries, the Sto. Niño de Romblon resided at the Cathedral of San Jose, until it was stolen in 1991. Today, the precious image of the Holy Child remains missing, and the one venerated in the church is just a decade-old replica. Nevertheless, the religious fervor of the people of Romblon continues to burn brighter every year, fuelled by the unabashed pageantry of the Biniray Festival, which serves as a tribute to their beloved patron.

Held in the capital town of Romblon every 2nd week of January, the Biniray Festival is marked with dancing, music and street revelry—echoing the same carnival spirit of Cebu’s Sinulog. The festival re-enacts the attempt to remove the image from the church with the highlight of the fiesta happening on the Bay of Romblon. Here, a flotilla of boats is launched to circle the bay seven times. A land parade follows, with costume revelers accompanying the Sto. Niño de Romblon throughout the streets of the town, carried on a bamboo-supported palanquin.

The Biniray Festival is but one of the many fiestas that not only pays homage to the Christ Child but also the people of Romblon to express their faith and folk piety to the full.