Santos were gifted by Spaniards and Filipinos alike with farmland, jewelry, costly clothes, churches, magnificently adorned carriages, vows of loyalty and promises to propagate their cults. There seemed to be magic in the miracles of saints; into the 18th century, churchmen worried about convincing their followers that sculptured images were but inanimate representations.


Somehow, a saint—or its santo—located lost objects, produced offspring in childless couples, kept sweethearts faithful and staid off lightning, locusts, famine, earthquakes, plague and pirates. It is no wonder anthropologist Sir James Frazer shocked his peers by generalizing that magic is the first rung in developing religion.

It is difficult now to fathom forefathers who were but several generations removed from paganism. Over four centuries, the syncretization is total; and separating the ethnic from Hispanic is confusing. But French writer Andre Malraux explains the intimacy shared by early devotees with their santos: 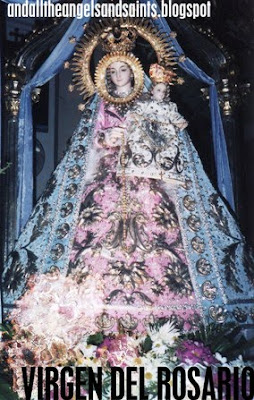 That (to quote a famous definition) a religious picture “before being a Virgin, is a flat surface covered with colors arranged in a certain order” holds good for us, but anyone who had spoken thus to the men who made the statuary of St. Denis would have been laughed out of court. For them…what was being made was a Virgin; and only in a secondary sense of arrangement of colors. The colors were arranged in a certain order not so as to be a statue but so as to be the Virgin. Not to represent a lady having Our Lady’s attributes, but to be; to win a place in that otherworld of holiness which alone sponsored its quality. 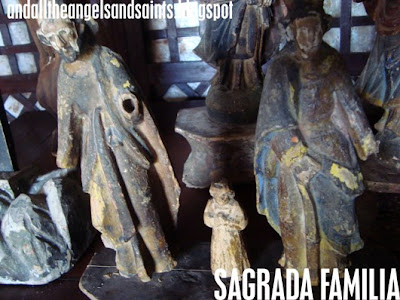 Nations, regions and religious orders maintained at various ages, special devotions to particular saints, martyrs as well as manifestations of Mary and Christ on the Roman Catholic calendar. 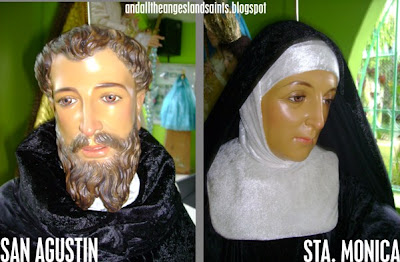 Many santos of San Nicolas de la Penitencia, Sto. Tomas de Villanueva and San Agustin come from territories of the latter’s Order. This group of friars who arrived with Adelantado Miguel Legazpi in 1565 ministered in Cebu, Iloilo, Masbate, Camarines, Batangas, Laguna, Pampanga, Pangasinan, Ilocos, Cagayan and later Leyte. It is through their efforts that cults like Sta. Lucia (beginning in 1592), Sta. Monica (starting 1756) and Sta. Rita de Cassia were established locally. 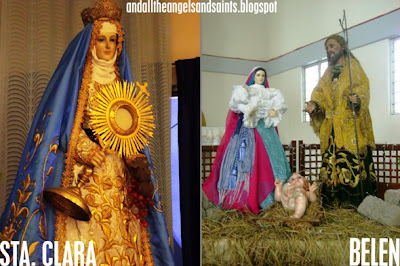 San Antonio is a universal saint highly ranked throughout island households. His patronage is due largely to Franciscan efforts. It declined when Our Lady of Perpetual Help, a late 19th century devotion brought by Redemptorists to the Philippines in 1906, took hold after World War II. The Franciscan order also spread the use of Christmas belens, devotion to the Way of the Cross and Exposition of the Blessed Sacrament; Sta. Clara, patroness of good weather is their most popular female object of dulia. 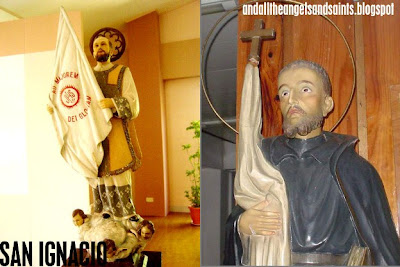 Jesuits served from 1581 to their expulsion in 1843 (*blogger's note: the correct date of explusion is 1767) and returned in 1859. They established towns in Cavite, Bohol, Samar, Leyte, Panay and Zamboanga. Santos of San Ignacio de Loyola, San Francisco Javier and San Roberto Belarmino are usually from their province. 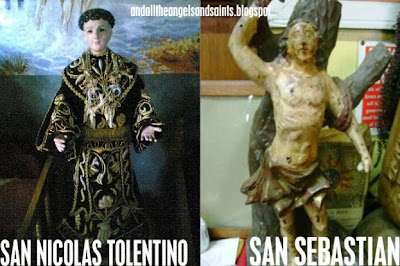 When the Augustinian Recollects landed in 1606, they encouraged San Guillermo, San Nicolas de Tolentino and San Sebastian as devotions. They were charged with administration of churches scattered throughout eastern Mindanao, Romblon, Palawan as well as a few missions in Luzon and Visayas.

(MANY THANKS, to Robby V. de la Vega, for his flickr pictures of San Ignacio de Loyola)