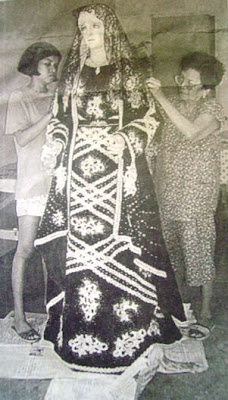 Mary Magdalene set foot in Binangonan, a sleepy town in Rizal province sometime in 1920. She was fo sale.

A young woman named Brigida Antazo-Ojeda and her trader husband Segundo Ojeda first saw Mary Magdalene on Evangelista St. near Quiapo one fine day. She was a towering 5’8” image of the woman from whom Jesus Christ cast out seven devils in Galilee.

Brigida and Segundo bought and brought Mary Magdalene home in Binangonan. They adopted her like the child they never had.

She was actually the second Mary Magdalene who came to the town. The first one was a smaller, owned by another couple in a nearby barangay. But for still unknown reason, the couple joined Iglesia Ni Cristo and abandoned her in a bodega, like any other old fashioned mannequin.

Another couple wanted to buy her but the Iglesia couple turned it down, saying what the Iglesia had rejected should not be given to somebody else. Nobody ever saw her again. She disappeared without a trace.

In contrast, Brigida’s Mary Magdalene was warmly welcomed at the Ojedas’ ancestral home. She was an instant attraction. The house had huge windows made of capiz and a wide balkonahe that allowed people to see her from the outside.

Earthquakes, typhoons and floods struck Binangonan one after another in the years that followed but Mary Magdalene never left the Ojedas. She stayed even when Japanese soldiers occupied Binangonan during the war.

Mary Magdalene stayed in the corner of the ancestral house even when a Japanese Army captain seized and used it as his command center, forcing the Ojeda couple and their relatives to evacuate.

But the Japanese captain didn’t touch Mary Magdalene, probably either out of fear or out of respect. Brigida would later tell this story to her nieces, among them Leticia P. Manuzon, now a 76 year old retired public school teacher.

Mary Magdalene stayed with the Ojedas, even after Segundo died before the liberation. In no time, she gained the respect of the residents who attributed to her certain miracles in their lives.

She would later join the annual Holy Wednesday, Good Friday processions and Easter Sunday “salubungan” in the town’s poblacion, representing the Galilean woman who washed Jesus Christ’s feet with her tears, dried them with her long hair, and covered them with perfume.

Dressing up Mary Magdalene for the processions that dramatize the life and passion of Jesus Christ is not easy, especially with her 5’8” frame. It is one elaborate production, Manuzon said.

Because she was once a woman of the world, Church leaders in Binangonan allow Manuzon’s family to dress Mary Magdalene to the nines.

“Ay naku”, said Manuzon’s cousin, 53-year old Ursula Libramonte-Ojascastro, another retired public school teacher. “Si Magdalena kasi pustoryosang babae. So we have to capture that”. A petticoat and a robe are a must, for instance.

She wears one bright dress with rhinestones and semi-precious stones for the Holy Wednesday procession and an elegant black dress for the funeral or the Good Friday procession.

Still she has to wear one set during ordinary days and another set when she is brought to remote barangays for the “Pabasa”. Unlike other women saints on parade, Mary Magdalene must hold a bottle of perfume on her right hand. Even if she was once a woman with a checkered past, she wears a sparkling crown.

When Brigida died of old age in 1960, she asked her nieces to cherish Mary Magdalene the way she did. In 1986, Brigida’s ancestral house gave way to a new one. By then, Brigida’s own nieces have their own families. Still, Mary Magdalene continued to occupy an esteemed place.

Mary Magdalene would later undergo some changes: her body and arms were repaired. Her face had to be waxed. Her hair color turned from burgundy to white. Roughly, she’s now 80 years old.

A few years back, a wealthy Chinese trader approached Manuzon and offered to buy Mary Magdalene for a huge sum. The offer was so tempting but it was flatly rejected. In fact, townsfolk would be the first to reject it. To them, Mary Magdalene is priceless.

She belongs now not only to the Ojedas but to all of the town’s devout Catholics, serving as an inspiration to repentant sinners.

A mother sending her little boy to school once made the sign of the cross when she got past Brigida’s ancestral house a few years back. She said a few prayers and urged her little boy to do the same: ”There is a saint in the house”.

Like the Galilean woman who changed her ways, Mary Magdalene is not for sale. Not at all.
Posted by Alex D.R. Castro at 1:10 AM