By Mary Marshall
Originally published  in Archipelago, The International Magazine of the Philippines, 1978-VI A-48. Pp. 24-26. 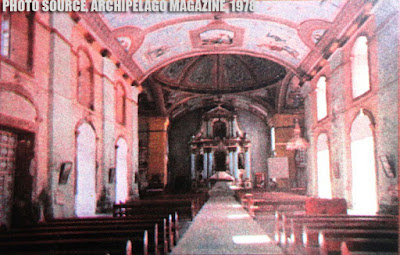 The church of Loboc in Bohol was built in 1602, paintings and ceilings were restored in 1927.

Bohol island is probably  most well-known in the Philippines for its strange, humpy Chocolate Hills and its startled, saucer-eyed tarsiers. Its mefolk too have something of a reputation. Bohol’s heroes include fierce datus such as Warai Tupueng and Sikatuna (famous for his blood compact with the conquistador Legaspi), Tamblot the apostate pries, and Dagoho the outlaw and priest-killer. Not a breed to be trifled with. Nor a region where one would expect to find the flowering of Christian folk art. Nevertheless, some of the most remarkable churches in the Philippines are found in Bohol, and some of the oldest.

Baclayon. The most ancient, was built by its parishioners in 1595 to the design of Spanish priests, Juan de Torres and  Gabriel Sanchez, members of the first Jesuit mission sent to the Philippines, in 1581. Typically, it is a massive construction made from limestone blocks hewn from the quarries of Baclayon and neighboring Albuquerque. It stands confronting the sea, its massive  three-storey tower with splayed base resembling a fortress is not fortuitous. The belfry served as a citadel in which parishioners could huddle for protection when Moro pirates made one of their lightning salving raids during the seventeenth and eighteenth centuries.

The seven sacraments which correspond to the seven ages of man are also depicted in the ceiling murals.

Harassed by Moro pirates from the seas and unbelievers from the hills, Chrstian missionaries had limited success in Bohol. The initial impact of the Jesuit missions was confined to the coastal areas around Baclayon, Loboc and Dauis. Even then, it seems to have been superficial as far as most impressionable Boholanos were concerned.

In 1621,a native priest, Tamblot, incited the lowland converts to abandon the new religion. Only Lobic and Baclayon held firm in the new faith.Elsewhere, the renegades burnt villages and churches and built temples to the old gods. In 1774, another, more serious rebellion broke out. When a Spanish priest refused to give Catholic burial to a Boholano killed in a duel, the dead man’s brother Francisco Dagohoy killed he priest and formed an outlaw band in the hills. Many malcontents and rebels against Spanish rule joined him and the revolt lasted nearly 100 years. 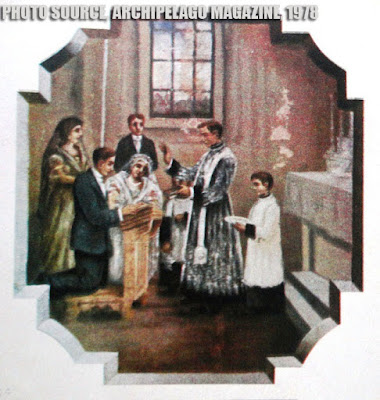 Despite the constant challenges to Christianity to Bohol and throughout typhoons and earthquakes, the great churches of Baclayon and Loboc survived. Other damaged churches were laboriously rebuilt or repaired (Loboc in 1855 for instance, and Dauis in 1883). Today, the churches of Albuquerque, Loboc, Loon and Dauis house some remarkable ceiling morals which seem to have been first painted around the middle or later half of the last century.

Many of the murals portray scenes from the life of Christ, his mother and various saints, with San Roque and the Santo Niño especially popular subjects. Sometimes, special themes are followed, such as the Resurrection and the Ascension, or the Childhood of Christ. Sometimes, “musical” paintings are carefully selected for the rear of the church near the choir gallery. We see King David playing the harp, or an angelic trio of violinist, harpist, and flautist, with a ladylike accompanist at the piano. 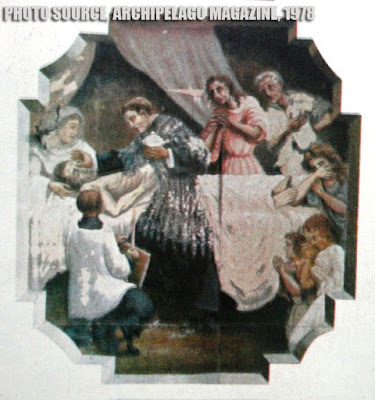 In Albuquerque and Loon, , the murals include a delightful and unusual series of tableaux on the theme of the Seven Ages of Man. The various scenes illustrate events of religious significance in man’s life, from birth through baptism, first communion and confession, marriage, last rites and funeral mass.

The Ages of Man murals have great appeal. The turn of the century middle-class costumes have an evocative period flavor. In the Loon paintings, the artist allows himself some wry humor: in the scene of the first confession, a horned devil lies in wait outside the confessional for a girl who clearly has been no better than she should be. 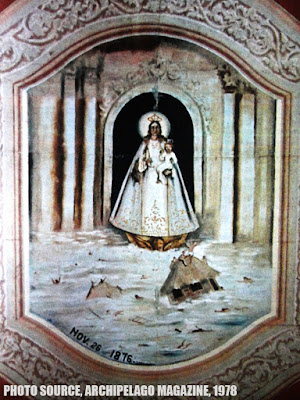 In November 1876, the river of Loboc overflowed and flooded the town to the level of the feet of the Virgin painted on the altar reredos. The townspeople implored the help of Our Lady and her intervention in stopping the flood is commemorated with ceiling paintings.

The paintings in Loboc have very local reference. In November 1876, the waters of the river Loboc, across the street from the church, rose during a severe typhoon to the level of the feet of the Virgin of the church, in the reredos above the altar. At this pint, the flood waters were stayed and gradually receded. The miracle, attributed to the Virgin, is recalled in two of the  ceiling paintings, one a Filipino version of the biblical flood with dramatically tumbling nipa huts.

The Bohol mural painters make no claim to be Michelangelo, but their rk has vigor and sincerity hich endows their church interiors with a warmth and life missinh from many more austerely or conventionally modernized Spanish churches elsewehere. For one travel-strained visitor least, their discovery was truly a serendipity. 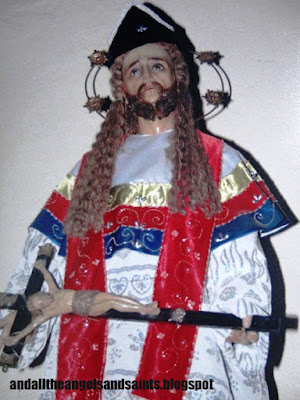 In San Juan, Batangas can be found a church dedicated to the Bohemian (now Czechoslovakia) martyr-saint, San Juan Nepomuceno or St. Johann of  Nepomuk.  The Prague University graduate was appointed pastor of the church of St. Gallus. After earning a doctorate, he was made a canon, and then Vicar General of the Archdiocese of Prague in 1393. 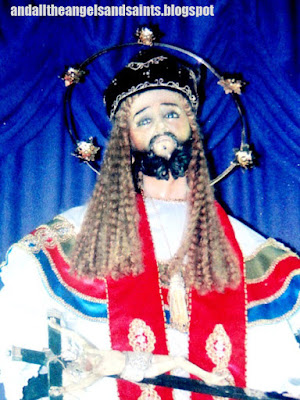 In San Juan, Batangas can be found a church dedicated to the Bohemian (now Czechoslovakia)  martyr-saint, San Juan Nepomuceno or St. Johann of  Nepomuk.  The Prague University graduate was appointed pastor of the church of St. Gallus. After earning a doctorate, he was made a canon, and then Vicar General of the Archdiocese of Prague in 1393. It was said that because of his refusal of King Wenceslaus IV’s  command to reveal the confessions made by his  Queen Sophia, the king ordered him tortured and thrown into the Moldau River. As such, San Juan is the patron saint of Czech Republic, bridge builders, confessors and is invoked against floods, slander and indiscretions. 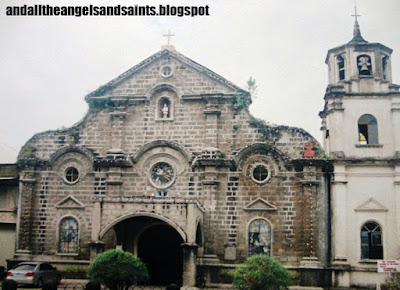 Though not a popular devotion, a few parish churches are dedicated to this “martyr of the confessional, thanks mainly to the Recolteos who propagated the devotion. The San Juan Nepomuceno Church, first erected in 1843 in San Juan, Batangas is one of the few to hold him as titular patron. A stone church replaced it through the efforts of Fray Damaso Mojica. Floods damaged it in 1894, but was rebuilt on its present site. 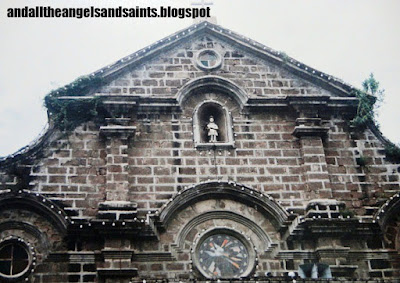 The Recollects ran the church until 1978, and the administration was transferred to the Oblates of St. Joseph. The same missionary order was responsible for making more major church improvements in 1995. 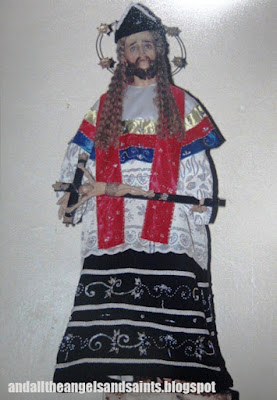 The 3-level church façade features a newer portico, three rosette windows between 4 columns,  a second-tier supported by 2 columns with a niche containing a stone statue of San Juan Nepomuceno, and  a pediment topped with a cross. The bell tower, with its midcentury design,  seems out of place alongside the more ancient church.  The churchyard is secured with concrete fence. 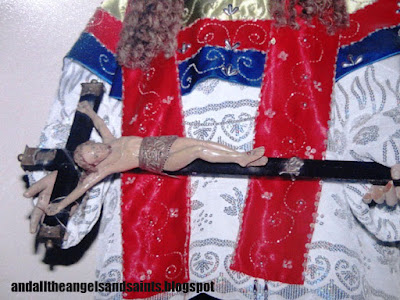 The age-old statue of San Juan Nepomuceno is featured prominently in the central niche of the altar mayor. He is shown wearing his biretta, and around him is a halo of 5 stars  commemorating the stars that hovered and lit his body, on the night of his murder. His iconography includes a crucifix and a pam of martyrdom. In Latin America, he is depicted with a padlock on his lips to symbolize his vow of confidentiality of confessions. 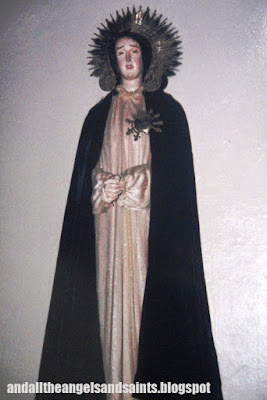 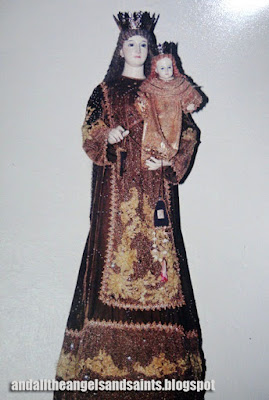 Inside the church are a number of old, church-owned images including a Dolorosa, Sto. Entierro and a Nazareno. 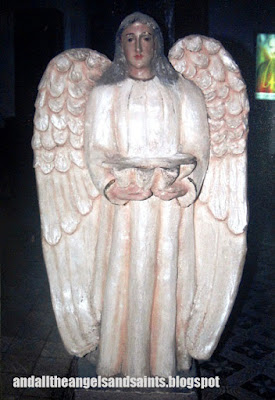 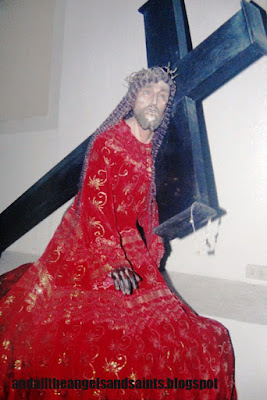 In comparison with the more well-known churches of Batangas like San Sebastian of Lipa, St, Martin of Tours Basilica of Taal and St. Rafael in Calaca, the San Juan Nepomuceno Church may not look  as spectacular , but remains one of the cultural treasures of the province. 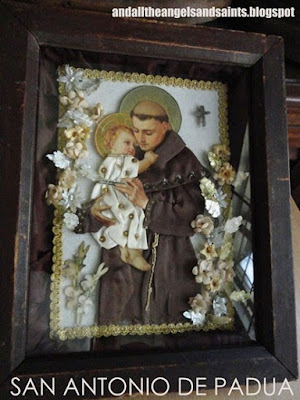 One vanishing art that is taught in mostly Catholic schools is the construction of 3-dimensional religious images from flat pictures, encased in a shadow box. This art form has its origins in the monastic arts of yore that were created by nuns to while away their leisure time, that often includes embroidery, painting, shellcraft, paper tole and paper curling. When religious-run schools were established, nuns passed on this shadow box art to their students, as part of the art education classes.

This small vintage, 1950s 3-D picture of San Antonio de Padua with the Child Jesus, was found assembled in a cardboard box, its frame gone. To achieve the 3-D look, the colored figure of the baby-holding saint is first cut out,  then is “clothed” with brown fabric that is folded, creased and glue to the figure, to simulate the natural drapes of the robes when worn by a real person. 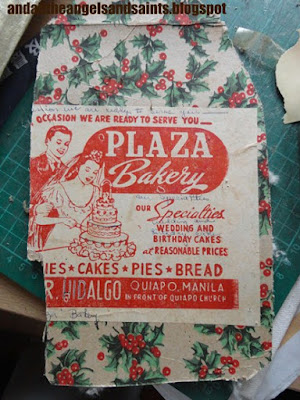 The cincture was fashioned  from a piece of string, and the vestments decorated with sequins. The Child Jesus is dressed using the same process. The saint’s paper hands, and the Baby’s arm and feet, which have been cut separately, are then set appropriately to complete the 3-D illusion.

The whole ensemble was pasted on a cardboard backing, decorated with cotton,  fabric flowers and foil leaves. The backing, as it turned out, was from a bakery carton packaging (Plaza Bakery) that may once have kept a pie or a cake for Christmas. 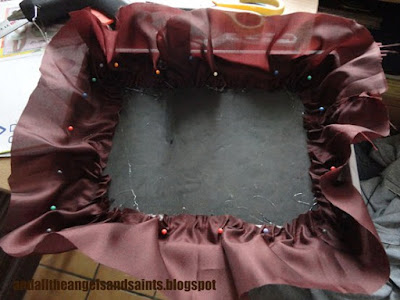 The well-preserved San Antonio cut-out was carefully removed from this backing, and the most of the fabric flower decorations were saved.   The cutout, together with the rewired flowers and foil leaves, were then assembled on a new, thicker cardboard backing. 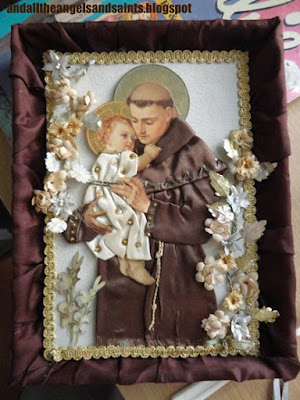 Meanwhile, a new cardboard box was constructed from foam board and the lined with brown, ruffled fabric to form the matting. The cardboard containing the 3-D San Antonio was then glued onto the inside of box. 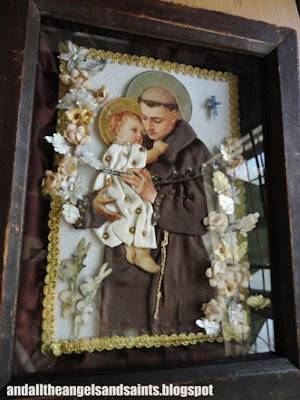 The whole assembly was then encased permanently under a vintage glass frame, the last step in the shadow box art reconstruction.